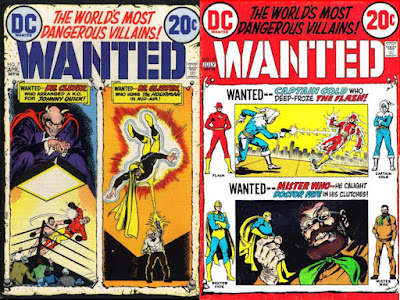 E. Nelson Bridwell didn't make it easy for future comic historians.  While it was great seeing stories of Johnny Quick, Hawkman, Hourman, Flash and Dr. Fate in Wanted, The World's Most Dangerous Villains, these villains he chose for the seventh and eight issue....

Doctor Clever....Gentleman Ghost (okay, not a bad choice, but he isn't on the Nick Cardy cover!)....Doctor Glisten....Captain Cold (good one there!)....and Mister Who!

Still, here there are!

The Adventure Of The Human Streak 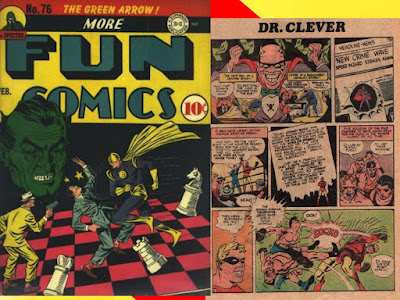 First up for the seventh issue of Wanted from More Fun Comics #76 (February, 1942) by Mort Weisinger and Mort Meskin is the story of Johnny Quick facing a new speedy menace, thanks to his reoccurring foe, Dr. Clever (under an original cover of Dr. Fate by Howard Sherman)!


Johnny Quick's foe, Dr. Clever, fakes his own hanging in prison to get free, and continue his war with his foe. Dr. Clever has a new trick up his sleeve, a ray that gives whomever he shines it upon super-speed, and uses it on his henchman, Breezy. 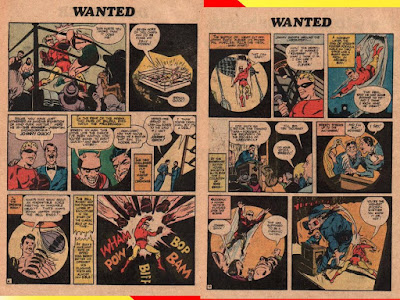 After sending Breezy on a looting spree, Dr. Clever has his man confront Johnny Quick in the ring (as Johnny was using his speed formula in a boxing exposition to raise money for the USO).  Breezy beats Johnny, and Dr. Clever takes him back to his lab, where he leaves Johnny in a heated cage to perish.  Johnny gets a little extra boost from his speed formula, frees himself, and is able to defeat both Breezy and Dr. Clever.

Dr. Clever had faced Johnny before in More Fun Comics #74, and would return in More Fun Comics #78 and #89, while Johnny Quick would eventually go on to Adventure Comics (with many of these tales reprinted, and later, be a focus of the retroactive comic, the All-Star Squadron).

The Crimes That Couldn't Have Happened 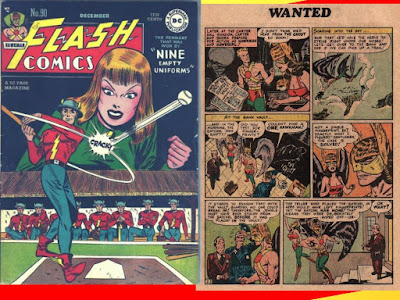 Next up, is a tale of Hawkman and his invisible foe, the Gentleman Ghost (so invisible he didn't make the cover) from Flash Comics #90 (December, 1947) by Robert Kanigher and Joe Kubert (with original Flash cover by Carmine Infantino and Frank Giacoia).


Gentleman Ghost returns (his first appearance reprinted in Secret Origins #1), this time having taking the loot from a locked bank vault.  Hawkman and Hawkgirl spring into action, finding out he had taken the jewels before it was placed into the vault. 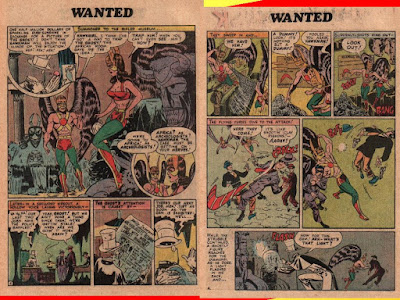 The Gentleman Ghost strikes again, taking a pharaoh's ruby from a museum, but his gives Hawkman a hint how to trap his foe.  Posing as archeologists having just returned from Africa with a precious gem, the Gentleman Ghost tries to rob the Hawks, who had a phony gem rigged with a camera to take his picture.  In battle with the Ghost, he tries a weapon on the Hawks, which explodes on him, and he disappears.  Checking the camera footage, Carter and Shiera still are unsure whether he was really a ghost.

Gentleman Ghost would return, to face not only the Golden Age Hawkman, but the Silver Age Hawkman as well, revealing that he really was the ghost of Gentleman Jim Craddock! 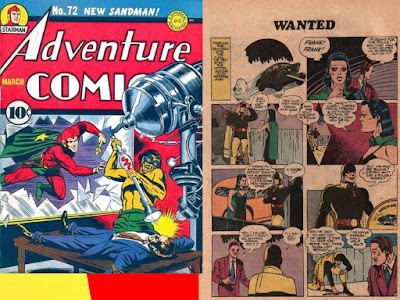 The last adventure in issue seven was from Adventure Comics #72 (March, 1942 under a Starman cover by Jack Burnley) with an Hourman (Rex Tyler, the man with power for an hour) story by Ken Fitch and Bernard Baily, featuring his foe, Dr. Glisten. 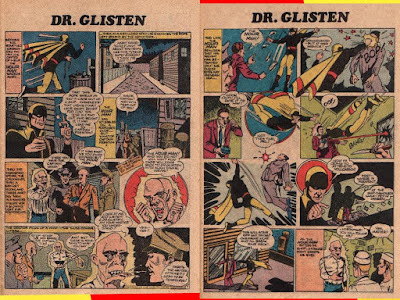 While patrolling, Hourman comes across a hit and run that was really a kidnapping, taking submarine Captain Frank Preston.  The Captain was taken by Dr. Glisten, who used his hypnotic powers to enslave himself a submarine crew, who he planned to use on his own submarine to loot the seas and blame it on enemy subs.  Hourman tracks down the villain, and puts the lights out on his nefarious scheme.

This was the only appearance of Dr. Glisten, but Hourman had many adventures in Adventure Comics with quite a few of them being reprinted. 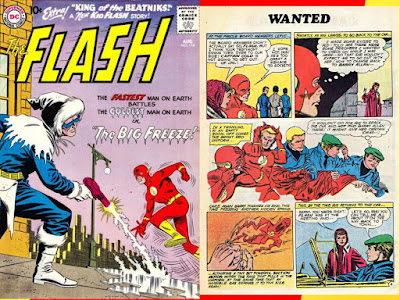 
Leonard Snart was up for parole, with Iris West taking Barry Allen there so she could testify. 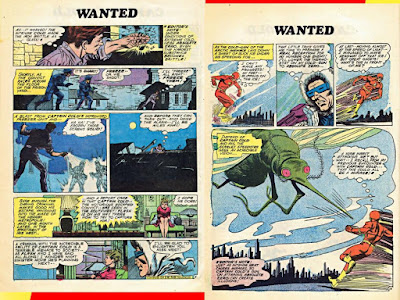 Barry then appeared as Flash to testify as well, recommending Captain Cold not be let go.  The prison board agreed, but Snart was able to escape anyway with a refrigeration device he had made.  As Captain Cold, Snart approached Iris West, who informed him she wouldn't have anything to do with him even if he was the last man on Earth.  Captain Cold worked on that, with a new device that froze everyone in Central City except those two.  Barry, being outside of the city, heard of its plight, and sped home as the Flash, breaking through the ice barrier surrounding the city.  Inside, Flash faced off against Captain Cold's cold illusions and real ice threats to knock out his foe, and with Iris' help, turn off the device freezing Central City.

Captain Cold had faced Barry before during his original Showcase run (reprinted in Treasury form), and would repeatedly return to face the Flash! 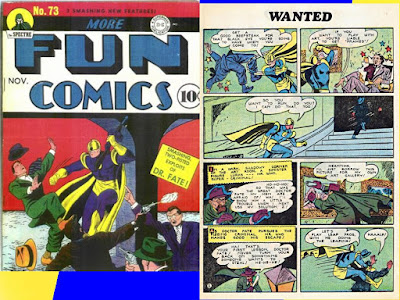 Last but not least for the eighth issue, is the first appearance of Mister Who from More Fun Comics #73 (November, 1941) by Gardner Fox and Howard Sherman, with Sherman also providing the original cover with Doctor Fate!

Dr. Fate shows up to stop hoods from robbing a museum, but their boss, Mr. Who, gets the painting he wanted and escapes. 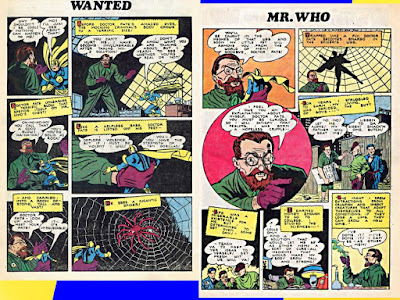 Dr. Fate finds Mr. Who's headquarters, and confronts him, but is surprised by the power of Mr. Who, enhanced by Solution Z, which gives him powers of strength, regeneration, growth and camouflage.  Capturing Dr. Fate, Mr. Who tells him the tale of how he was a sickly youth, and developed Solution Z to give himself a new lease on life.  Leaving Dr. Fate to face a giant spider, Mr. Who goes out to steal a diamond.  Dr. Fate escapes the spider, tracks down Mr. Who, and faces him on a boat, where Dr. Fate (still not use to his lesser power with his half helmet), throws Mr. Who through the boat, to the bottom of the lake.

Mr. Who would return a few more times in More Fun Comics (only reprinted in the Doctor Fate Archives), and even later, as a member of the Monster Society of Evil (facing Hawkgirl, Hourman, Dr. Fate and Sandy) introduced during the Crisis during World War II (and tying in with the next issue of Wanted). 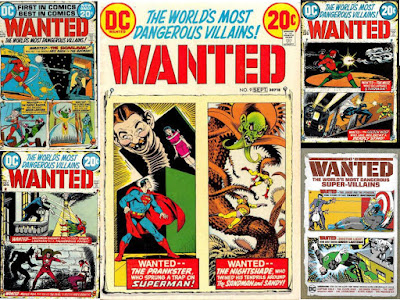 Proceeding to the end of Wanted, having Batman, Flash and Golden Age stories (though no Golden Age Flash) with one more issue left (though the letter pages didn't foreshadow this).  Hope was still there, with possible promises of new stories, and perhaps an all female issue of Wanted, with Catwoman, Poison Ivy, Cheetah or the Huntress!