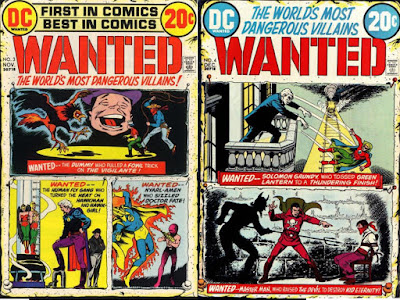 More E. Nelson Bridwell goodness from the past, as shown on these Nick Cardy covers for Wanted: The World's Most Dangerous Villains #3 (November, 1972) and #4 (December, 1972).

This time, it is foes of Vigilante, Doctor Fate, Hawkman, Green Lantern and Kid Eternity....all from the Golden Age, with villains of the Dummy, Nyarl-Amen, the Human Fly Bandits, Solomon Grundy and Master Man.

The Little Men Who Were There 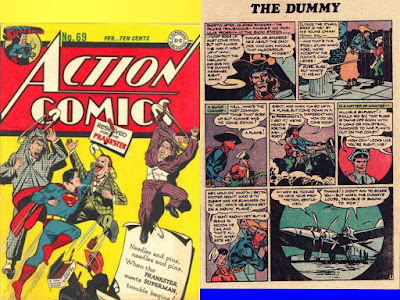 First up, the first story reprinted in Wanted #3 is Action Comics #69 (February, 1944) by Joe Samachson, Mort Meskin and Joe Kubert, featuring the western Vigilante and his foe....the Dummy (though the original cover by Wayne Boring and Stan Kaye featured Superman fighting the Prankster!).

The Dummy was a small man, with a big evil intellect, who after finishing a train robbery, sent a message to Vigilante about his next robbery....he was going to heist a flying plane! 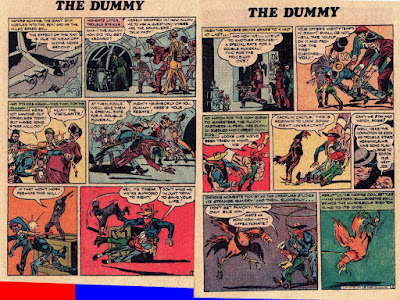 Vigilante (Greg Sanders) and Stuff the Chinatown Kid got aboard that plane to keep it safe, but the Dummy and his men used a shrinking ray at their blacksmith headquarters.  The Dummy and his men were hidden in a crate on the plane, and enlarged to go after the diamonds on the plane, and escaped via parachute.  Vigilante and Stuff followed them back to their HQ, but that was the Dummy's plan....so he could use the shrink ray on them!  After a fight with a chicken (!!!), Vigilante and Stuff turned the tables on the villains and shrunk them, defeating them easily.  Then, they presented the villains to the police...in a parakeet cage!

The Dummy was the only villain from the third issue who appeared outside the tale reprinted, featuring in issues of Leading Comics with the Seven Soldiers of Victory, as well as facing Vigilante in other issues of Action Comics (sadly no other Vigilante/Dummy stories were reprinted). 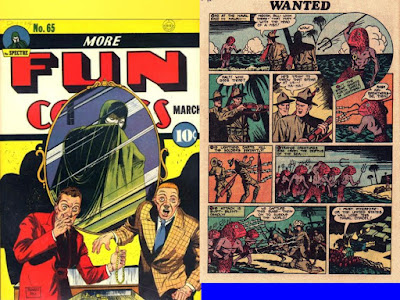 Next up is the Doctor Fate reprint from More Fun Comics #65 (March, 1941) by Gardner Fox and Howard Sherman (though Bernard Baily's Spectre was on the cover).

Here, the Doctor faced the ancient foe of Nyarl-Amen! 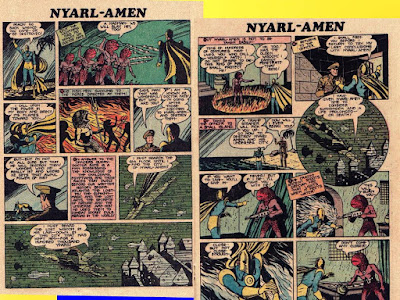 Nyarl-Amen were fishmen from the sea who ruled over 50,000 years ago, and Dr. Fate saw them attacking a Hawaiian naval base in the here and now!  The fish-men attacked the soldiers with ancient mystic weapons, but Doctor Fate drove them off.  Doctor Fate followed them to their undersea home, where he found that Nyarl-Amen was gathering information on the worlds' armies to plan an attack against mankind.  Using his ancient sorcery, he fought Nyarl-Amen, who perished falling on his own sword, with Dr. Fate destroying the city of the fish-men to end their ancient evil. 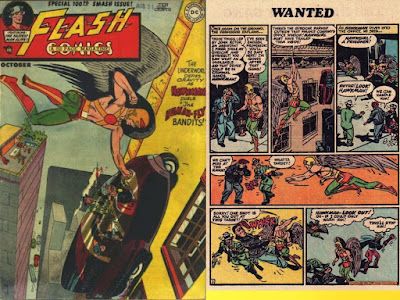 Last but not least of the first issue of reprints, is a Hawkman/Hawkgirl tale from Flash Comics #100 (October, 1948) by John Broome and Joe Kubert (with a Kubert Hawkman cover no less!). 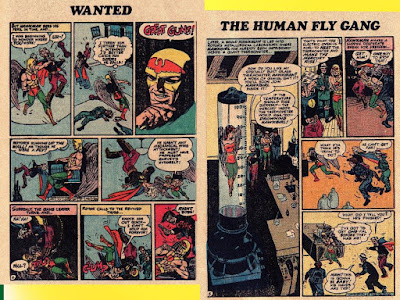 John Rotor was the villain of the story, and he was kidnapping Professor Garvey (an inventor friend of Carter Hall and Shiera Sanders) when the alter egos of Hawkman and Hawkgirl came upon the crime, and stopped Rotor from kidnapping Garvey in their heroic alter egos (though they had to chase a car up a building to do it!).  The professor had invented a way to deny gravity via gyroscope and the Human Fly Gang wanted it.  Rotor and his men were tracked by Hawkman and Hawkgirl, but the gang overpowered them using their new walking on walls gimmick.  Captured, Hawkgirl was placed in a giant thermometer, with Hawkman fighting to get a chemical before being thrown in with her.  The plan was to use a heating plate, and have the mercury suffocate them as it rose from the heat.  But, Hawkman got a chemical that would explode in contact with the mercury, which it did, allowing the Hawks to escape, then capture the villains (though they destroyed the professor's gyroscopic car in the process). 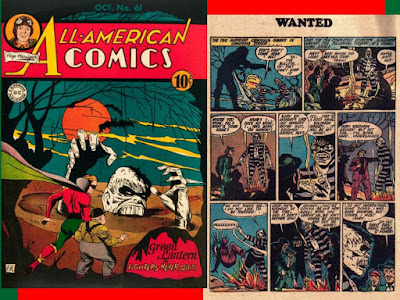 First up for the fourth issue of Wanted is All-American Comics #61 (October, 1944) by Alfred Bester and Paul Reimman (who also drew the cover), it must have been Monday, featuring the debut of Solomon Grundy and his first battle against Green Lantern Alan Scott!

Cyrus Gold was an old thief who died in Slaughter Swamp 50 years before this story.  Escaping hoods wandering the depths of Slaughter Swamp outside of Gotham found a reanimating corpse...who could articulate enough to say he was born on Monday (which gave them the idea to name him Solomon Grundy). 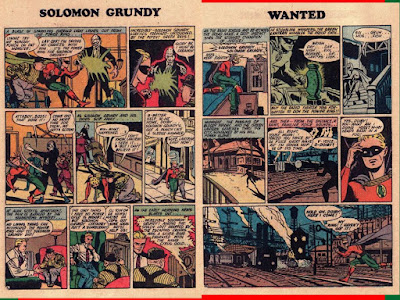 Getting non-prison attire on Tuesday, the new gang went to rob a jewelry story on Wednesday, facing Alan Scott (at least until the gang pulled out guns, at which point Alan left to become Green Lantern).  Solomon Grundy proved invulnerable to Green Lantern's mystic ring (which was only vulnerable to wood), and with his tremendous strength beat Green Lantern.  Going over the battle with his pal, Doiby Dickles, Alan found out that Solomon Grundy dropped the silver ring of Cyrus Gold in a robbery (Gold having died 50 years ago, escaping police in Slaughter Swamp...his body was the basis of Solomon Grundy).  After Solomon Grundy had a looting spree on Thursday, Green Lantern confronted him again, where the giant nearly killed Green Lantern!  Dazed, Doiby tried to confront Solomon Grundy on his own on Friday (with Alan eventually recovering and going to help on Saturday....but he forgot his Power Ring!).  Fighting Grundy in a trainyard, Green Lantern was able to trick Grundy in front of a train, perhaps spelling an end to Solomon Grundy as the sun rose on a Sunday.....

Only this and Grundy's JSA appearance from the Golden Age have been reprinted, but his Silver Age appearances (against Dr. Fate and Hourman, and two battles against the JLA and JSA have been).  Grundy would soon become very popular, facing Superman in his title and becoming a member of the Legion of Doom on the Super Friends cartoon. 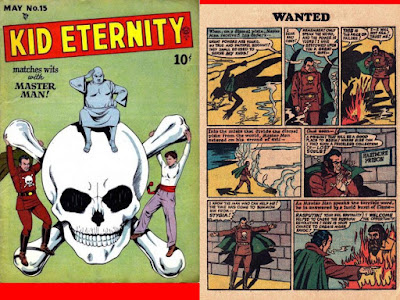 The last story of the fourth issue is from Kid Eternity #15 (May, 1949) by William Woolfolk and Al Bryant (with an original cover by Al Bryant)...

....featuring the debut of Master Man, evil foe of Kid Eternity and his helper, Mr. Keeper!

As Kid Eternity could summon dead heroes to help him by saying "Eternity", Master Man was empowered by the devil to bring up dead villains for more dastardly deeds by saying "Stygia". 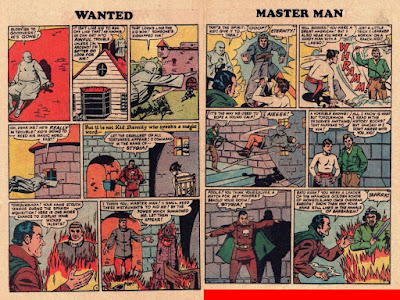 Outside a prison, Master Man first summoned evil Russian Rasputin to break into a prison (where Kid Eternity and Mr. Keeper brought up coach Knute Rockne for help).  Foiling Master Man's plans, the devil bid him to kidnap Kid Eternity, and use the Spanish Inquisition's main torturer, Torquemada, against the kid.  Fighting free after being found by Mr. Keeper, Kid Eternity summoned Will Rogers for help....then Master Man summoned Mongol Batu Khan, whom Kid Eternity had face European Charles Martel...with Kid Eternity eventually beating Master Man...who was dragged to hell via a fissure because of his failure.

Master Man would later return with other Satanically influenced villains to face the Marvel Family and Kid Eternity in two digest issues of Adventure Comics (the Marvel Family's last solo tales before the Crisis On Infinite Earths). 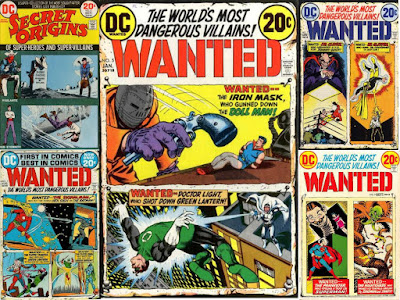 E. Nelson Bridwell seemed to be picking favorites here, as both Vigilante and Kid Eternity would have their Secret Origins featured in a soon to debut new reprint title that he edited, and the Hawkman and Dr. Fate stories were more for the heroes (though Green Lantern was a big thing).  The letters' pages promised if there was enough demand, new stories would be possible, but later issues didn't prove that out (but, unlike the first two issues, these were all Golden Age stories!).

Posted by Dave's Not Here Comic Blog at 4:38 PM