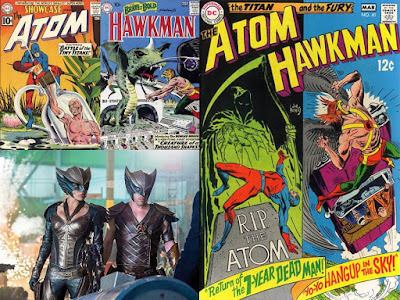 With a cast as big as CW's Legends of Tomorrow, it can be necessary to shrink it down a bit...

...shrinking is what the Atom does, and Hawkman and Hawkgirl are already part of the show's past, flying off after the first season.

As the summer without new episodes continues, how about looking back to the early days of Atom and Hawkman, and finding those old adventures in DC Archives! 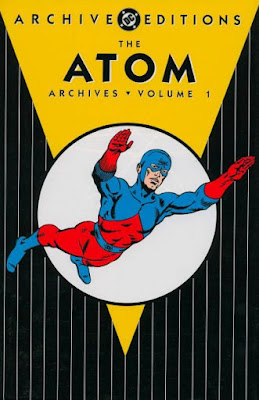 Physicist Pay Palmer shrinks himself down to save his girlfriend lawyer, Jean Loring, in Showcase #34 (September-October, 1961) with "The Birth Of The Atom", and gets his Atom name and costume (which only appears when he is shrunken) in the second tale in this issue, as he saves small alien Kulan Dar from criminal Carl Ballard in a "Battle Of The Tiny Titans". 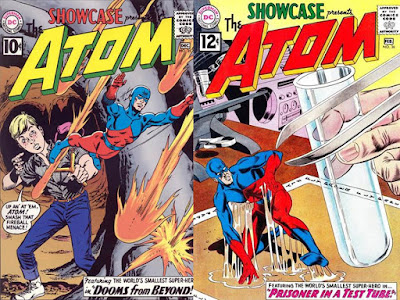 Atom helps a man get his inheritance in the full length tale of "The Dooms From Beyond" in Showcase #35 (November-December, 1961), and finds himself a "Prisoner In A Test Tube" in Showcase #36 (January-February, 1962), saving Jean's professor father from foreign spies (and beginning a relationship with the government), as well as helping out a friend of Jean's from false accusations in "The 'Disappearing Act' Robberies". 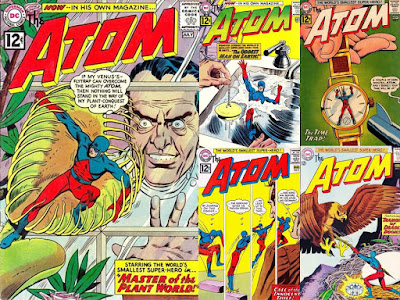 Atom faces his major foes as well, starting with Jason Woodrue, the Plant-Master, an exile from an inter-dimensional world in the full-length tale from the Atom #1 (June-July, 1962) in "Master Of The Plant World" and Chronos (David Clinton) in "The Time Trap" from the first half of the Atom #3 (October-November, 1962).  Other stories included are the two from the Atom #2 (August-September, 1962) with "The Oddest Man On Earth" and "The Prisoners Who Vanished" (facing Carl Ballard again), the first appearance of the inventor of the time pool, Alpheus V. Hyatt (and the Time Pool, a device that a small man like the Atom could use to travel time) in "The Secret Of "Al Atom's' Lamp" in the Atom #3 (October-November, 1962), "The Machine That Made 'Miracles'" that guest-starred Snapper Carr from the Justice League of America (which Atom had joined) and "The Case Of The Innocent Thief" from the Atom #4 (December-January, 1962/1963), and "The Diamond Of Deadly Dooms" and "The Specter of 3000-Moons Lake" from the Atom #5 (February-March, 1963), rounding out the Archive. 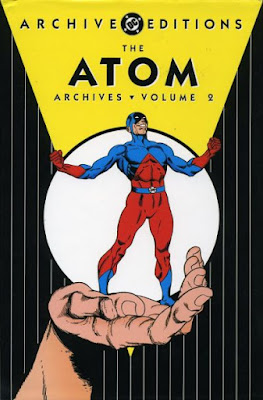 The Atom Archives #2 (October, 2003) continues the adventures of Ray Palmer's smaller alter ego from the Silver Age, starting with the Atom #6 and running through the Atom #13.


The Atom #6 (April-May, 1963) featured two stories, the first "The Riddle Of The Two-Faced Astronaut" having Ray and Jean help out a stage magician, and second, "The Highwayman And The Mighty Mite" having the Atom secretly use the Time Pool to fight the Highwayman (Dick Turpin, also known as Tom Palmer) in 18th Century London. 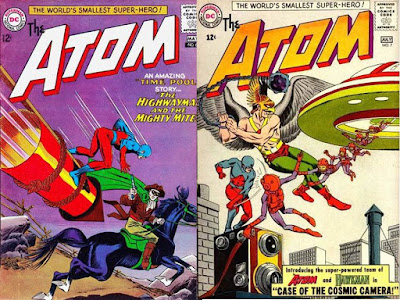 The Atom #7 (June-July, 1963) has "The Case Of The Cosmic Camera" and features the first meeting between the Silver Age Atom and Hawkman, with the two facing off against a race of invading aliens called the Thalens.  This started a life-long friendship among the heroes (and helped out Hawkman, who still didn't have his own book at the time, but more on that further on down the page). 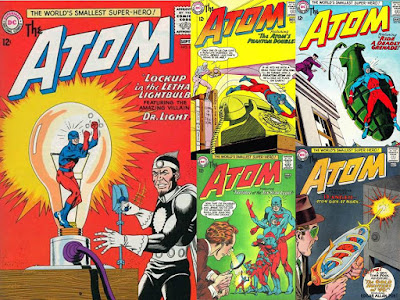 The Atom could have used Hawkman's help in the Atom #8 (August-September, 1963), as he faced JLA foe, Dr. Light, in the "Lockup In The Lethal Lightbulb" alone, as the JLA was on a space mission at the time (facing Zazzala, the Queen Bee in Justice League of America #23 of November, 1963).  The second story of the Atom #8, "The Purloined Minatures" is also included.  Atom faces off against "The Atom's Phantom Double" and takes another dip in the Time Pool to 1609 in "The Seaman And The Spyglass" in the Atom #9 (October-November, 1963).  Atom works for the C.I.A., and with a dangerous "Ride A Deadly Grenade" and meets "The Mysterious Swan-Maiden" in the Atom #10 (December-January, 1963/1964). 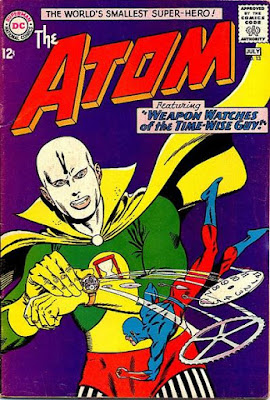 Ray Palmer meets members of his Ivy University graduating class, and has "Trouble At The Ten-Year Club" with Jack Archer and then goes on a vacation cruise with Jean Loring (and finds more trouble) in a "Voyage To Beyond" from the Atom #11 (February-March, 1964).  Ray's lab assistant, Enrichetta Negrini first appears (and needs Ray's help) in "Danger -- Atom Gun At Work", then the Atom goes into the Time Pool, meets Edgar Allan Poe, while helping out during in "The Gold Hunters of '49" (1849, that is) in the Atom #12 (April-May, 1964).

Finally, the Atom faces Chronos again in "Weapon Watches Of The Time-Wise Guy" as David Clinton uses his clock motif to try to steal jewelry from Anton Teljas and his daugher, Eva, then has to clear his alter ego's name when "I Accuse Ray Palmer -- Of Robbery", both from the Atom #13 (June-July, 1964), ending the Archive collection of Silver Age Atom stories (well short of the Atom's last solo issue of the Atom #38 of August-September, 1968). 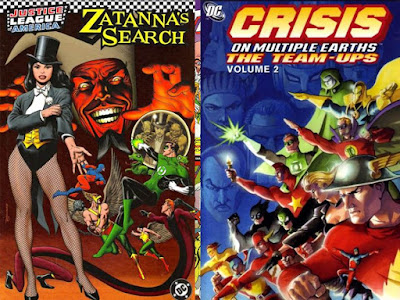 But, a few more Silver Age Atom stories from this era did get reprinted.  The full-length story of the "World Of The Magic Atom" facing the Druid from the Atom #19 (June-July, 1965) found itself reprinted in the JLA: Zatanna's Search tradepaperback of January, 2004 (along with Zatanna's original run, including Hawkman #4 from October-November, 1964), and Ray Palmer's meetings with the Golden Age Atom (Al Pratt) from the Atom #29 (February-March, 1967) facing "The Thinker's Earth-Shaking Robberies" and the Atom #36 (April-May, 1968) with the "Duel Between The Dual Atoms" both being reprinted in the Crisis On Multiple Earths: The Team-Ups #2 of 2007 (along with stories of the Green Lanterns, the Flashes and even Starman and Black Canary!).

Wouldn't you like to see a little more of the Silver Age Atom? 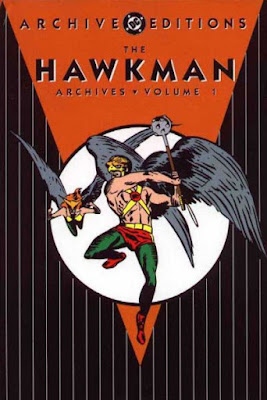 The Hawkman Archives #1 (September, 2000) introduces us to Katar and Shayera Hol, police officers from the planet Thanagar, starting with their first tale from Brave and the Bold #34 (February-March, 1961) by Gardner Fox and Joe Kubert, and includes their solo appearances from Brave and the Bold issues #35, #36, #42, #43, #44 and Mystery In Space #87 to #90 (with Murphy Anderson handling the art on the Mystery In Space issues).

Katar and Shayera come to Earth in pursuit of Thanagarian criminal Byth Rok, "The Creature Of A Thousand Shapes", and after defeating him in Brave and the Bold #34, stay on Earth to help Commissioner George Emmett (who knows their true identities), the Hawks live among us humans as Midway City museum curators and archeologists Carter and Shiera Hall, and work with Mavis Trent, a naturalist who has a fascination for the married Carter (and doesn't know their secret identities). 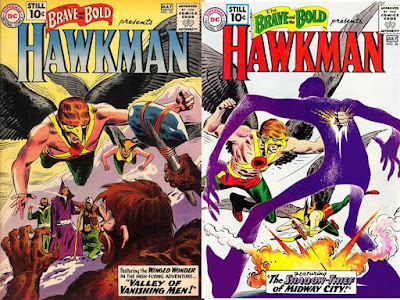 The Hawks face their first Earth foe with the Mark Mandrill and his magic wand of Mentachem) in the "Menace Of The Matter Master", then end up in the "Valley Of Vanishing Men" in Brave and the Bold #35 (April-May, 1961).  Hawkman and Hawkgirl face magic expert Konrad Kaslak and his "Strange Spells Of The Sorcerer" and then small time crook Carl Sands who gets a device that allows him to become the "Shadow Thief Of Midway City" in Brave and the Bold #36 (June-July, 1961). 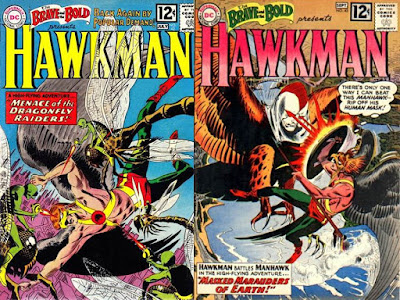 Hawkman returns in Brave and the Bold #42 (June-July, 1962) with "The Menace Of The Dragonfly Raiders", where they have returned to Thanagar, reflect on their time on Earth with police Chief Andar Pul, and fight Byth and his cellmate Jarl, with Hawkman earning his honor wings at the end of this story.  Hawkman reflects on his own life on Thanagar before his first appearance, including time with his father, Paran Katar, as he and Hawkgirl return to Earth to face the Manhawks (which Katar and his father faced before) in "The Masked Marauders Of Earth" in Brave and the Bold #43 (August-September, 1962). 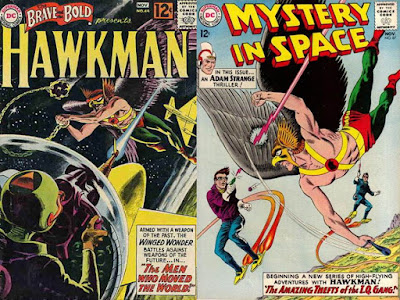 Hawkman and Hawkgirl deal with a Thanagarian holiday (which falls on the same day as the 4th of July) on "Earth's Impossible Day" (where the Hawks have to perform 3 impossible tasks), and deal with "The Men Who Moved The World" in Brave and the Bold #44 (October-November, 1962).  Hawkman then next appears in the Atom #7 (not in this collection, but you can find it earlier in this article).

Hawkman and Hawkgirl still don't get their own title, but move to Mystery In Space to share the book with Earth spaceman on the planet Rann, starting with Mystery In Space #87 (November, 1963), facing off against Ira Quimby and "The Amazing Thefts Of The I.Q. Gang" (and new Hawkman artist, Murphy Anderson). 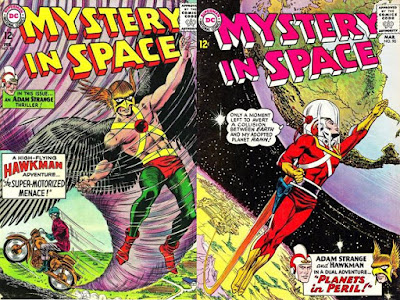 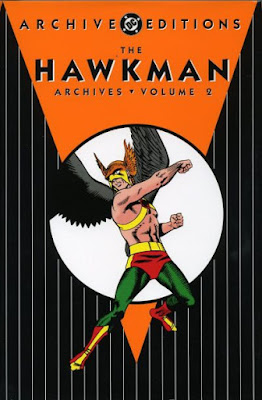 The Hawkman Archives #2 (November, 2004) finally deals with the first issue of a regular Hawkman series, with Hawkman #1 (April-May, 1964) and continuing on until Hawkman #8 (June-July, 1965), with stories by Gardner Fox and art by Murphy Anderson.

Hawkman #1 had Hawkman and Hawkgirl report back to Andar Pul, then head back to Earth in "Rivalry Of The Winged Wonders" before facing off against new foe, the immortal Mayan chief Chac in the "Master Of The Sky Weapons). 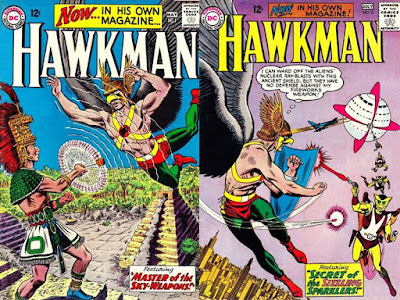 The alien Thralls came to face Hawkman and Hawkgirl in the "Secret Of The Sizzling Sparklers" and, with Midway Museum press agent Joe Tracy, the Hawks discovered the wings of Icarus in "Wings Across Time" in Hawkman #2 (June-July, 1964).  The Hawks faced the Sky Raiders in "The Fear That Haunted Hawkman", and were "Birds In The Gilded Cage" thanks to some mobsters in Hawkman #3 (August-September, 1964). 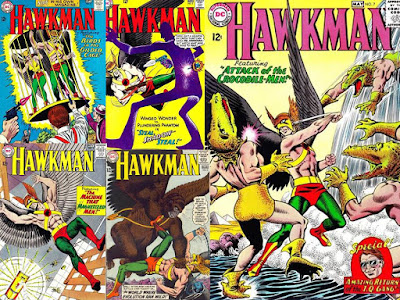 Hawkman and Hawkgirl met "The Girl Who Split In Two" (which was really magician Zatanna, in her first appearance, looking for her lost father, Zatara), then had to deal with Time Bandits in "The Machine That Magnetized Men" in Hawkman #4 (October-November, 1964).  Hawkman and Hawkgirl dealt with the return of the Shadow-Thief (who discovered their secret identities) in "Steal, Shadow -- Steal" from Hawkman #5 (December-January, 1964/1965). 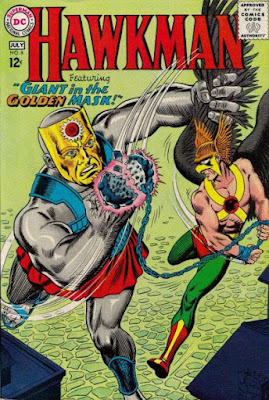 
Hawkman and Hawkgirl dealt with the "Amazing Return Of The I.Q. Gang", then got ready for the "Attack Of The Crocodile-Men" in Hawkman #7 (April-May, 1965).


Last, but not least, with the stories of Hawkman #8 (June-July, 1965), and facing the "Giant In The Golden Mask" and Fal Tal in the "Battle Of The Bird-Man Bandits", Hawkman's Archive collection concludes. 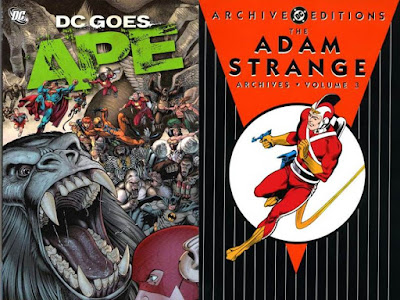 A couple of the later tales of Hawkman and Hawkgirl from their first series have been reprinted recently as well.  Hawkman #16 (October-November, 1966) with its story of the "Lord Of The Flying Gorillas" found its way into the collection DC Goes Ape in 2008 (along with Grodd and Titano storie as well) and Hawkman #18 (February-March, 1967) with the "World That Vanished" was reprinted in the Adam Strange Archives Volume #3 of 2008, also quite a few issues shy of the last issue of the Silver Age Hawkman with Hawkman #27 (August-September, 1968), or his continuation title with the Atom, Atom and the Hawkman #45 (October-November, 1969). 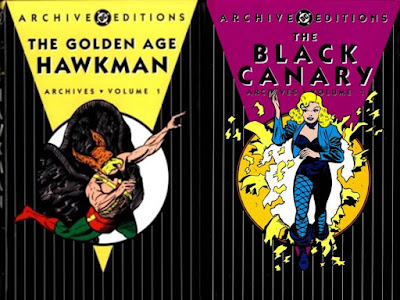 Of course, the Hawkman we saw in Legends of Tomorrow was more of the classic, Golden Age Hawkman....and you can find the guide to the Golden Age Hawkman Archive here (with details on the different Hawkgirls and how they fit into Hawkman's lives here); as well as finding the guide to the Golden Age Black Canary Archive here (White Canary being a much more recent invention); with Captain Cold and Heat Wave popping up in Flash Archives (as detailed here).  Sadly, Rip Hunter and Firestorm never got Archives, but new member, Hourman, did have more than a few reprints as well (as detailed here!).

Unlike the Silver Age Flash, Green Lantern, Justice League of America and Adam Strange....no current collections Silver Age material of Atom and Hawkman have been announced (but we can hope!).

Posted by Dave's Not Here Comic Blog at 3:40 AM