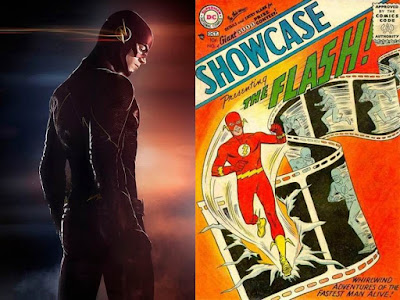 With the summer upon us, TV shows like CW's Flash go into reruns...and classic comics had their own reruns back in the day, with various forms of reprints.

An often reprinted book is Showcase #4 (September-October, 1956), which features the premiere of Barry Allen as the Flash in the "Mystery Of The Human Thunderbolt!" by Robert Kanigher, Carmine Infantino and Joe Kubert, with habitually late police scientist Barry Allen being hit by lightning while in front of chemicals in his lab, then, after finding out he has super-speed while saving his girlfriend, Iris West, figuring out an identity and costume (based on a comic he read), going to stop the Turtle. 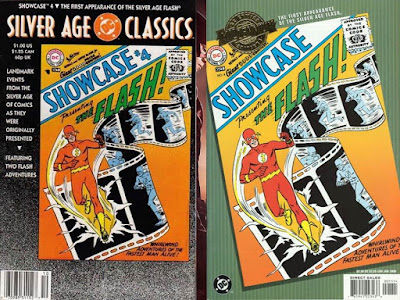 The second story in that issue was "The Man Who Broke The Time Barrier!", by John Broome, Carmine Infantino and Joe Kubert, with the Flash facing off against Mazdan, a criminal from the future!

But, between those two reprints, DC Comics started their Archives program (hardcover books that reprint runs of comic books), so, let's speed into what they covered! 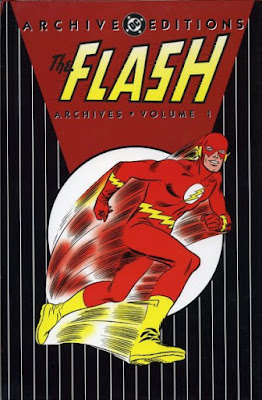 The first of the The Flash Archives #1 (June, 1996) covered the first issues Barry Allen (the Flash) appeared in, with Showcase #4, #8, #13, #14, and Flash #105 to #108, as well as including the Golden Age Flash story from Flash Comics #104 (February, 1949), Jay Garrick's last solo appearance in the Golden Age (fighting Rival, Jay's super-speeding foe....and more on Golden Age Flash reprints here and on Rival here; it was a different issue of Flash Comics that Barry was reading in his first appearance).


All that and an introduction by writer Paul Kupperberg (who among other credits, co-created Checkmate! and revived the Doom Patrol). 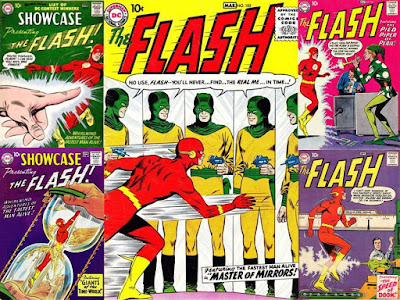 A heck of a great collection of Flash issues to start with, and many of these tales had been reprinted elsewhere, but never in order in one book until this time! 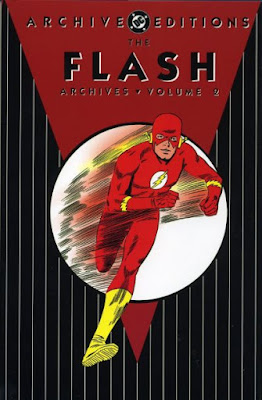 The second time around brought us The Flash Archives #2 (March, 2000), and this collection featured all the stories from Flash issues from Flash #109 until Flash #116, with a few first appearances, as well as some returning foes, just like you would hope.

This archive also includes an introduction by Bob Rozakis (DC's Answer Man, and writer of many books, like the Teen Titans and Freedom Fighters, and co-creator of the Calculator, a villain who faced many members of the DC Universe...but never the Flash!). 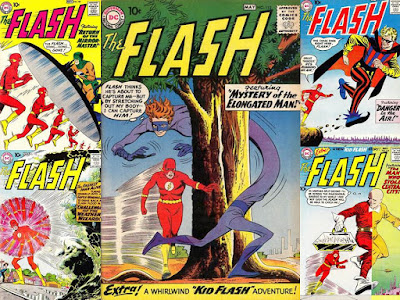 This time around, stories include: Flash dealt with the "Return Of The Mirror Master" in Flash #109 (October-November, 1959); introduced Weather Wizard Mark Mardon and Kid Flash Wally West in Flash #110 (December-January, 1959/1960); saw Wally get his own back-up feature starting with Flash #111 (February-March, 1960) while Barry continued to fight crime (and this time, a cloud menace) in the main story; introduced the Elongated Man (a.k.a. Ralph Dibny) in Flash #112 (April-May, 1960), fought the Trickster (James Jesse) for the first time in Flash #113 (June-July, 1960), fought Captain Cold again in Flash #114 (August, 1960); faced Gorilla Grodd in a massive story in Flash #115 (September, 1960), and saved Central City in Flash #116 (November, 1960), while Wally dealt with a Blue Valley racing group.  It was also during this period that the Flash helped found the Justice League of America. 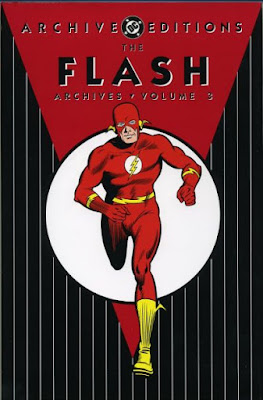 The third time is the charm with The Flash Archives #3 (January, 2002), with reprints of all the stories from Flash #117 to Flash #124, and many important adventures for the Flash, establishing his history and even setting a course for the entire DC Universe, as his adventures had been getting closer to being a monthly event as the individual comics were coming out.

Also included in this volume is a foreward by Paul Levitz, who, along with leading DC for a while, wrote many stories of the Legion of Super-Heroes, and a few with the Justice Society of America in the 1970s revival of All-Star Comics and Adventure Comics. 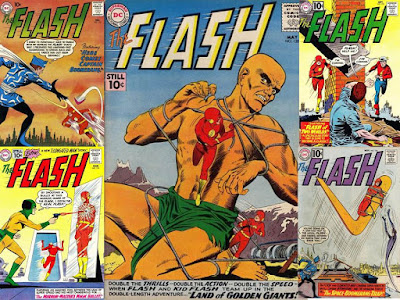 This archive includes: the first story of Captain Boomerang (George "Digger" Harkness) and how he faced the Flash in Flash #117 (December, 1960); some quieter stories for Barry and Wally in Flash #118 (February, 1961), another return of the Mirror Master, and Elongated Man meeting and marrying Sue Dearbon (to become Sue Dibny) in Flash #119 (March, 1961); a full-length team-up of the Flash and Kid Flash traveling back in time to face "The Land Of The Golden Giants!" in Flash #120 (May, 1961); dealing with "The Trickster Strikes Back" in Flash #121 (June, 1961); the introduction of a villain that put Flash into a spin, the Top, in Flash #122 (August, 1961); and Flash #123 (September, 1961), with a full length tale, re-introducing Jay Garrick to the world (and that he had existed on his own world) with the "Flash Of Two Worlds" from Flash #123 (September, 1961) facing off against Jay's foes of the Thinker, the Fiddler and the Shade; and a Flash-Elongated Man team-up against Captain Boomerang from Flash #124 (November, 1961). 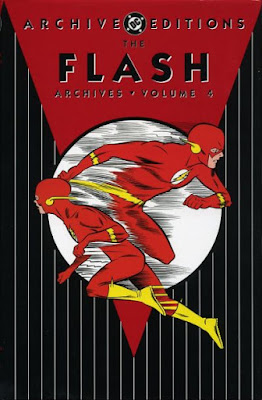 The Flash Archives #4 (April, 2006) fills in the next chapter of the life of Barry Allen, collecting his adventures from Flash #124 to Flash #132, along with a little of his friends, Kid Flash and the Elongated Man.

This archive includes a foreward by Mike W. Barr, who co-created the Outsiders (including Katana, Halo and Geo-Force), as well as having a memorable run on Detective Comics with artist Alan Davis (and even writing the last team-up of the Batman and Flash in Brave and the Bold!). 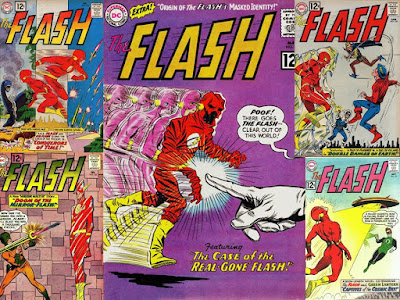 This volume starts off with a full length Flash/Kid Flash adventure, with the pair traveling through time and facing, among other perils, dinosaurs, in...."The Conquerors of Time!" from Flash #125 (December, 1961).  Flash faces the Mirror Master again in Flash #126 (February, 1962) as well as in a separate story from the same issue, reunites with a past love, Daphne Dean (which causes some problems for the already committed Barry Allen).  Grodd returns with his first cover appearance and feature story in Flash #127 (March, 1962).  Flash #128 (May, 1962) sees "The Case Of The Real Gone Flash", introducing 64th Century sorcerer Abra Kadabra as a foe for the Flash (and, in a separate story, reveals "The Origin Of The Flash's Masked Identity".).  Jay Garrick helps Barry with his foes of Captain Cold and the Trickster in Flash #129 (June, 1962) with "Double Danger On Earth!" (and a hint of the Justice Society as well!).  Flash faces the Mirror Master, and maybe other foes of Captain Boomerang, the Top, Captain Cold and the Trickster in Flash #130 (August, 1962) while in the same issue "Kid Flash Meets The Elongated Man" and they face the Weather Wizard!  Flash teams up with fellow charter JLA member Green Lantern (Hal Jordan) in "Captives Of The Cosmic Ray!" from Flash #131 (September, 1962) in the second solo team-up of these two Justice League members.  Then, Flash deals with his weight and with Daphne Dean in two separate stories from Flash #132 (November, 1962). 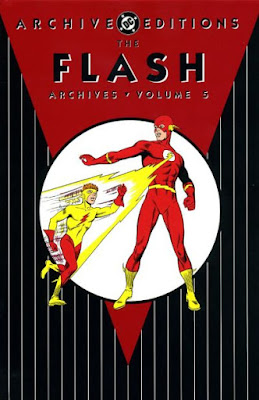 The Flash Archives #5 (March, 2009) sees a few changes for the Flash cast, as well the introduction of a few new villains, that will change the direction of Barry Allen's life (as well as that of his friends and family), with the stories from Flash #133 to Flash #141.

This archive also features an introduction by writer Tom Peyer, known mostly for his work on the android version of Hourman in his 25 issue series. 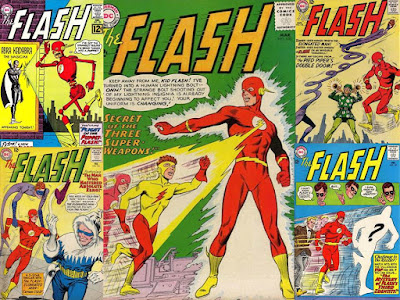 Starting this archive, Flash faced Abra Kadabra again with "The Plight Of The Puppet Flash" in Flash #133 (December, 1962) while Kid Flash found out the "Secret Of The Handicapped Boys"; Flash and Elongated Man faced Captain Cold in Flash #134 (February, 1963) while in a second story, we meet Iris' dad, Professor Ira West in "The Threat Of The Absent-Minded Professor"; Kid Flash gets his costume changed by Flash in the "Secret Of The Three Super-Weapons" from the full-length story from Flash #135 (March, 1963); Mirror Master returns yet again for Flash #136 (May, 1963); Vandal Savage and the Justice Society of America join Barry and Jay for the "Vengeance of The Immortal Villain" in full-length story in Flash #137 (June, 1963); Pied Piper faces off against Flash and the Elongated Man in Flash #138 (August, 1963) while Kid Flash meets actor Dexter Myles; Flash meets his most dangerous foe, Eobard Thawne, for the first time in Flash #139 (September, 1963) with the "Menace Of The Reverse-Flash"; Flash meets Heat Wave for the first time as "The Heat Is On For Captain Cold" in Flash #140 (November, 1963); and Flash pulls some trickery on the Top and meets Paul Gambi (a tailor for super-villains) in Flash #141 (December, 1963).  It was also during these issues that the first Flash Annual comes out, which reprints key Flash stories.... 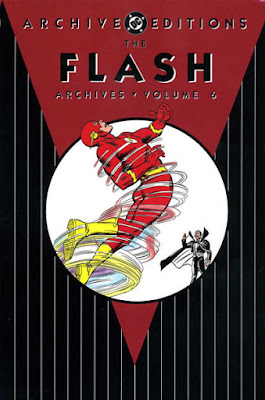 The last, but not least of the series is The Flash Archives #6 (August, 2012), with features the stories from Flash #142 to Flash #150 and by this time, the Flash team had the formula perfected in the original issues, making this collection a real treat!


This volume includes an introduction by Paul Kupperberg, who had done a previous introduction, but is also known for writing the Daring New Adventures of Supergirl as well.... 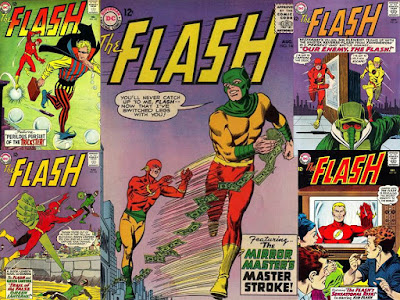 Starting off the collection is Flash #142 (February, 1964) with Flash in the "Perilous Pursuit Of The Trickster"; then, Flash teams up with Green Lantern (Hal Jordan) again, this time facing off against scientist (and future thief....he literally stole weapons from the future) T. O. Morrow from Flash #143 (March, 1964); faced Weather Wizard again in Flash #145 (June, 1964); Mirror Master again in Flash #146 (August, 1964); Mr. Element and the Reverse-Flash in a full-length story from Flash #147 (September, 1964); faced Captain Boomerang in Flash #148 (November, 1964); pulled some super-speed trickery to get help from Kid Flash in Flash #149 (December, 1964); and faced Captain Cold again in Flash #150 (February, 1965)...all along with the other stories from the above issues as well, all while Wally was helping to found the Teen Titans as well! 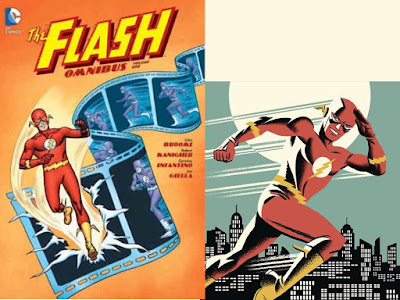 Even though this is the end of the Flash Archives, DC Comics still reprints Flash stories, with the Silver Age Flash Omnibus #1 with the four Showcase issues and Flash #105 to Flash #132, and the Flash: The Silver Age tradepaperback (coming later in 2016, cover still being finalized), which is reported to have the four Showcase issues as well as Flash #105 to Flash #113, and a second Silver Age Flash Omnibus is also planned, which will take Flash reprints past where the Archives ended!

Hopefully, fans are racing to get these books to keep the Flash reprints coming!

Posted by Dave's Not Here Comic Blog at 3:15 AM