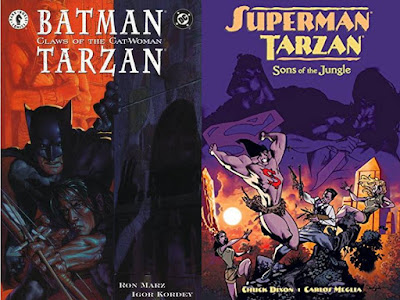 Odd to think of it, but Tarzan predates both Superman and Batman, with his first appearance in magazines back in 1912, thanks to creator Edgar Rice Burroughs.

One would think that the man born John Clayton, living in the lush jungles of Africa, with the woman he loves, Jane Porter (later, Jane Clayton, his wife), would be content there, and not run into aliens from another world, or avenging knights from an urban jungle.....

....but one would be wrong.  Here's a look at a few comic books that brought some fantastic elements to the lord of the jungle.

Claws Of The Catwoman 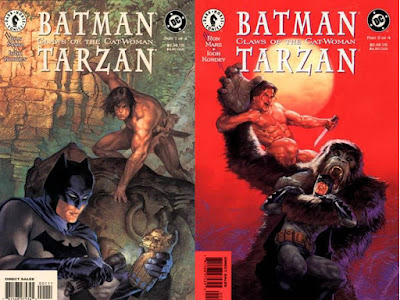 Batman, that urban hunter of criminal prey orphaned by criminals, found his way to the jungles of Africa, and brought Tarzan (an orphan raised by the jungle) to the city that is more dangerous than any jungle, Gotham, in the four issue mini-series of Batman/Tarzan: Claws of the Catwoman from September to December, 1999, by Dark Horse and DC Comics, written by Ron Marz, drawn by Igor Kordey and covers by Dave Dorman. 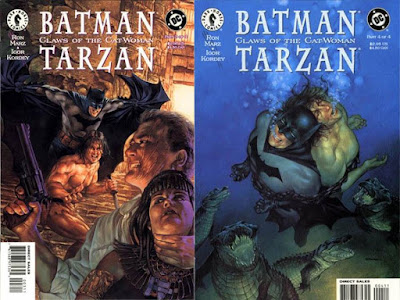 Set in the 1930s, Bruce Wayne's alter ego teams up with the Lord of Greystoke to save priceless African Cat-Cult treasures from Finnegan Dent (which the archaeologist had brought to Gotham without getting permission of their owners in Africa, sending John Clayton there to meet with Bruce Wayne).  Tarzan and Batman then followed Finnegan Dent back to Africa, where half his face was clawed by a lion...and the two heroes were able to stop him.

An odd pairing to say the least, but it also pointed out how different the two heroes were, even though both came into money, and worked to be prime examples of  humans, they also had differences, like Batman's unwillingness to kill, and Tarzan's anything for a goal attitude.  Better still, each man could respect the other for what they were.

Sons Of The Jungle 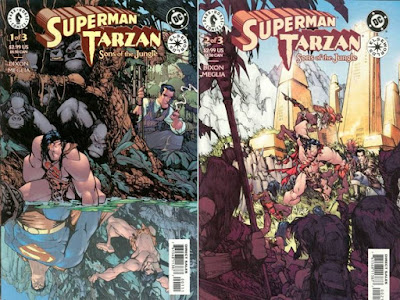 Superman and Tarzan seem an unlikely pairing...but in a way, it also seems a natural, both being orphans of their culture, raised by the natives of where they were to possess the values the locals had, and becoming a symbol beyond what they were if they had remained in their homes. 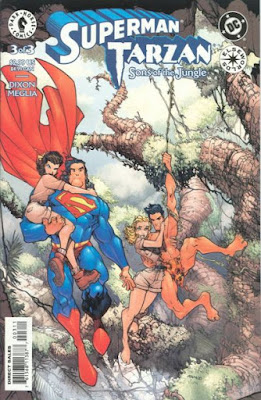 Odder still, the team-up given us by DC Comics and Dark Horse from October, 2001 to May, 2002 (distance of release dates due to the last issue coming in late) in the three issue mini-series, Superman/Tarzan: Sons Of The Jungle by writer Chuck Dixon, artist Carlos Meglia and covers by Humberto Ramos.  Taking an idea of Elseworlds (where familiar things happen in different ways, giving a look at heroes on alternate Earths), these tales look at a world where young Kal-El's rocket ended up in early 20th Century Africa, making him the Lord of the Jungle, and unintentionally saving John Greystoke's parents from being killed, allowing him to go back to England and grow up to be an adventurer.  The two eventually meet up as Greystoke journeys to Africa with female reporter Lois Lane (and meeting Jane Porter), dealing with being a stranger in a strange land, and then reverse roles, with the Kryptonian ending up in the city, and the Nobleman finding himself in the jungle.

In a way, these stories show the timelessness of these classic heroes....as well as how they find their way back to themselves, despite the changes the times put on them.
Posted by Dave's Not Here Comic Blog at 4:12 AM