Adding to the action figure collection of Marvel fans comes the latest collection, with two packs centered around one character with similar names. 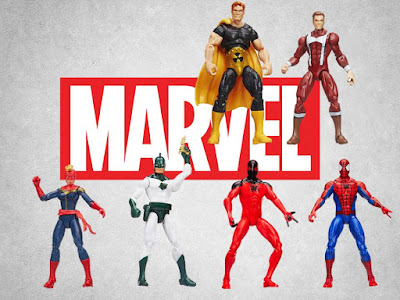 These 2 packs of Marvel Legends 3 and 3/4ths line include Hyperion from the Squadron Supreme (as opposed to the Squadron Sinister, in more recent, darker tones, and from an alternate Earth from a little while back) as the Supreme Power 2-pack; Captain Marvel Carol Danvers (masked) and Captain Marvel of the Kree (or Mar-Vell) in the Cosmic Marvels 2-pack, and Scarlet Spider and Spider-Man in the Web Slingers 2-Pack...and each two pack includes a comic as well!  What a Marvel from these figures from Hasbro!
Posted by Dave's Not Here Comic Blog at 4:42 AM