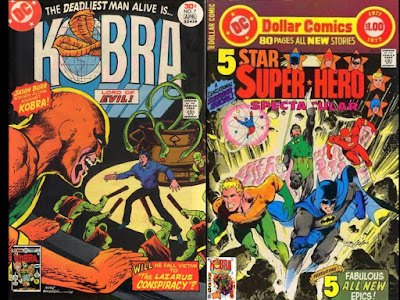 Kobra had been leading a charmed life....but, all good things come to an end.

Here's where the original Kobra saga came to its end, with two final solo stories based around the Lord Naja-Naja's battles with Jason Burr. 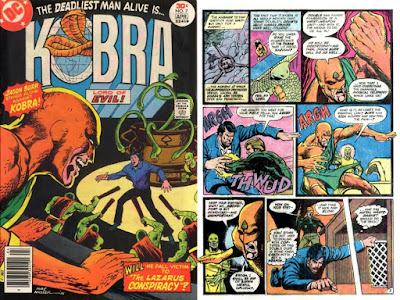 For once in Kobra's history, his creative team was the same, as Kobra #7 (March-April, 1977) hit the stands with Marty Pasko, Mike Netzer and Joe Rubinstein handling the story (and Netzer doing the cover....) as the saga of the battling Burr brothers continued. 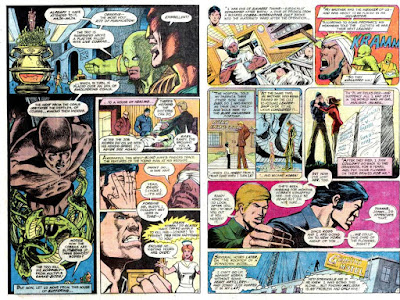 Here, Jonny Double and Professor Ross Emerson were celebrating their supposed victory against Kobra, thinking they blew up his Ark (in the previous issue), as Jason Burr dashes their hopes by storming into Double's San Francisco office, fresh from his delay in Oregon.

Meanwhile, Kobra is dealing with his troubles, punishing the men who let Jonny Double get one of wrist weapons.  Burr and his friends go to the hospital to check on Randu Singh, now blinded in the aftermath of last issue's battle with Kobra.  Burr recounts his history with Kobra, his parents' death and how his now missing girlfriend, Melissa McNeil, comforted him and put flowers on their graves for the last six years.  Double told Burr of his plans to go to New York with Emerson, and that they would take care of the flowers, as Burr now checked out the wrist weapon Double got. 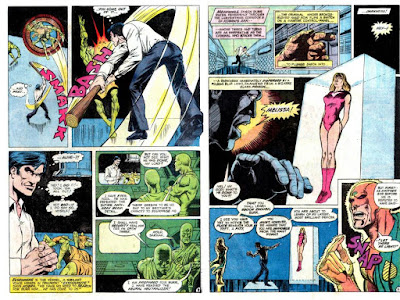 Using that device, Burr was able to get aboard Kobra's Ark, and battle his troops (putting Jason where Kobra wanted him).  In New York, Double and Emerson find that Burr's parents' graves were robbed....six years ago, and that no one had been there in that time!  Back to Burr, who discovers Melissa held captive in Kobra's Ark, as Kobra also takes Jason captive as well.  Kobra has a few new devices, including a Neural Neutralizer to prevent their brotherly physical telepathy from sharing their feelings. 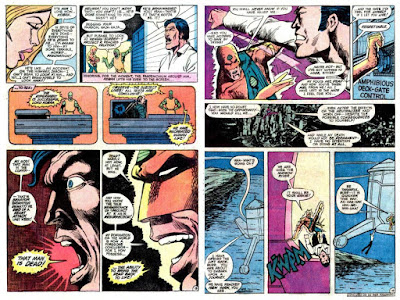 Kobra uses an Empathic Magnetizer to share the pain Kobra is inflicting on his lackeys with Burr.  Jason feels more pain, as Kobra leaves him alone with Melissa, who tells Jason that, though she doesn't know why, she no longer loves him, but loves Kobra instead.  Kobra now reveals his plan to Jason, that Project R is for Resurrection, as Kobra plans to kill world leaders, then resurrect them under his control.  Jason breaks free of his bonds, and battles Kobra, who throws Jason off his Ark over Hudson River (as they were flying to New York), thinking he could kill Jason.  Double and Emerson have to wonder about Melissa and Jason as their facts with the Burr's graves put doubt on their story.  Yet, Kobra feels pain after turning off his Neural Neutralizer, making him realize Jason is still alive, so, plans to resurrect his parents (whom Kobra has)!

The letters' page promises a nest issue, guest-starring Batman, that would deal with these issues....yet, in a rare time of not promising the title's end, the comic was cancelled with this issue!

The Dead On Arrival Conspiracy 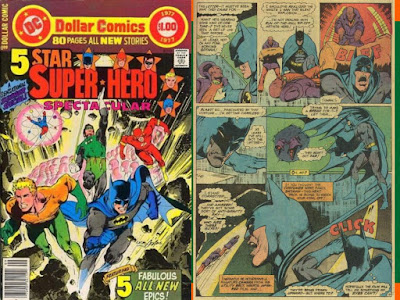 Still, the story of Kobra did get an end, in DC Special Series #1 (1977), as writer Marty Pasko reworked his tale to make it a little more of a Batman story, for Mike Netzer and Joe Rubinstein to draw (all under a special Neal Adams cover for this special 5-Star Super-Hero Spectacular issue, with four stories unrelated to Kobra, featuring Flash, Green Lantern, Aquaman and the Atom).

The adventure begins in Gotham, as Batman prevents members of the Cobra Cult from stealing a letter from the post office...and Batman is startled by the technology and uniforms of these thieves, especially when they evade him by being beamed up into the air! 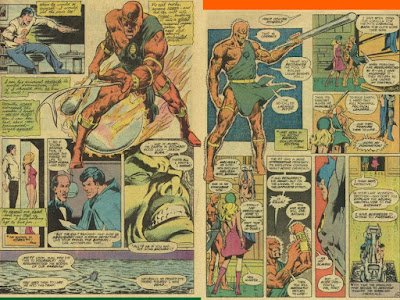 Odder still, that the letter he found, was addressed to Bruce Wayne.  Taking the letter home to the Batcave under the Wayne Foundation, and reads its contents to Alfred Pennyworth (Bruce's butler), as the letter recounts Kobra's origins (from issue one), and how Melissa ended up in Kobra's clutches (all with the letter being sent to Bruce because his family had slight ties to Burr's, with the letter being delivered by Burr's detective friend upon belief of his death, as Burr wanted Batman to continue his fight against Kobra, and Wayne was a known friend of Batman....unknowingly to Jason, Bruce was Batman!).

But, Jason was alive, and, under duress, was revealing what was in the letter to Kobra (as Kobra was protected by his Neural Neutralizer).  Batman used clues he gathered as he discovered Kobra's Ark, and that it had been in the Swiss Alps, home of a secret base of Ra's Al Ghul, which Kobra had appropriated, having Alfred fly him there, so he could break into the base.  In the base, Batman is eventually captured by the Cobra Cult, and bound with Jason Burr, Kobra reveals his plan to them, to kill them by dipping them in Ra's Lazarus Pit, which Kobra has treated to kill anyone immersed in it, and restore them to life under Kobra's control. 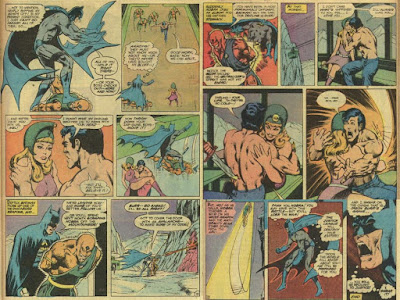 After telling them his plan, Kobra leaves the area (sigh...) and that allows Batman to use his acrobatic abilities to loosen his utility belt, dropping it into the pit to explode, and the two get free.  They find Melissa, and after a brief tussle with Kobra, where Batman takes him captive, they prepare to leave, with Jason and Melissa going ahead in the rail car off the Alps.  Kobra breaks free of Batman using his Neural Neutralizer, and beams aboard his Ark as Kobra's most nefarious plan comes to fruition, that Melissa, who was oddly deathly cold, kills Jason (as Kobra had killed and enslaved her prior to Batman's arrival).

This causes Batman to vow to work with the Justice League to bring Kobra to justice. 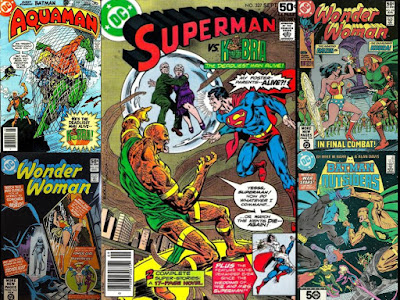 While this ended Kobra's series and his individual war against the world, Kobra would pick up that war in many different titles, including Aquaman, Superman, Wonder Woman, Batman and the Outsiders, DC Comics Presents and even briefly in the Crisis On Infinite Earths... 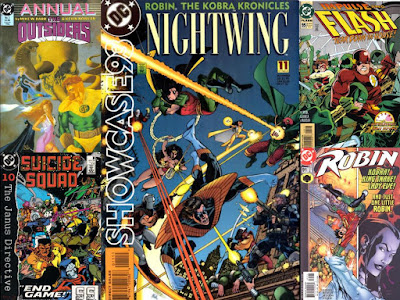 ...and later return to menace the Outsiders sans Batman, throw the governments intelligence agencies into chaos in the Suicide Squad/Checkmate! Janus Directive, deal with King Faraday on the Danger Trail, fight Deadshot, Deathstroke, Katana, Peacemaker and the female Dr. Light, face Wally West's Flash, work against Batman foe Bane, deal with Oracle and Black Canary in the Birds of Prey, face Tim Drake's Robin and more before a change in his status quo (and the new Kobra faces the JSA) and so much more, proving Kobra one of the most dangerous men in the DC Universe. 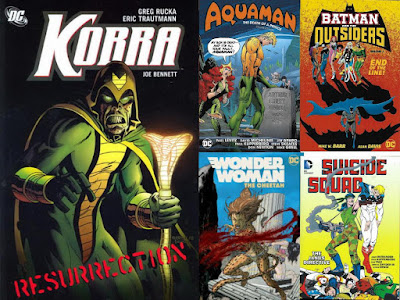 Finding these issues now is a little harder, as only Kobra #1 and the DC Special Series have been reprinted in Kobra: Resurrection (2010), but his Aquaman and Batman and the Outsiders appearances have been collected, as has his reinvention of Cheetah parts of his Wonder Woman appearances.  Time for a collection of the first seven issues of Kobra, plus the Five-Star Super-Hero Spectacular (with Jonny Double's Showcase and Marty Pasko written Superman #326/#327 as well) to give Kobra his due!

Posted by Dave's Not Here Comic Blog at 9:34 AM