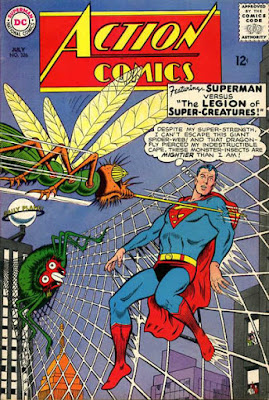 Even the mighty Superman can be bugged by things once in a while....

...especially when those bugs are really giant, invading insects, as they were in Action Comics #326 (July, 1965) as shown in the story by Otto Binder, Curt Swan and George Klein (with Swan and Klein showing the danger on the cover!). Clark Kent was enjoying time watersking with Lois Lane, when cries of a sea monster made him have to change into Superman.  Finding the monster, Superman was unable to best it, forcing the community to have to close down the lake for a time.  Heading back to Metropolis, Superman had to save a plane from a giant attacking mosquito....which ripped his indestructible red cape.

Later still, Superman tried, and failed to rip up a giant spider web near the Daily Planet, nearly ending up eaten by a giant spider as he was caught in its web.  Why were these creatures so harmful to Superman?  Were they from Krypton?  The army tried green Kryptonite against them, to no avail.  Superman, searching for clues at his Fortress of Solitude, found an alien ship, and went to check it out.  Entering the ship, it closed the hatch behind him, and took him to the planet of Giantia, a giant world orbiting a red sun, where Superman found a cult of death worshiping aliens, who planned on using the super-insects to destroy 100 worlds after their own had ended. 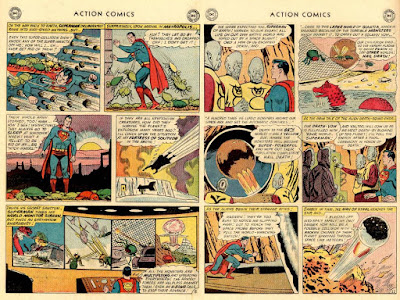 Earth was the 100th, so, the aliens blew up this world, with Superman barely escaping in the ship in time (having lost his powers in the red sun/high gravity of the insect world which had made the creatures such a menace).  As the craft returned to Earth, it pulled orange Giantite behind it, which, as Superman orbited Earth wondering what to do next, had started to fall to Earth....killing the bugs, as Giantite was as deadly to them as Kryptonite was to Superman! 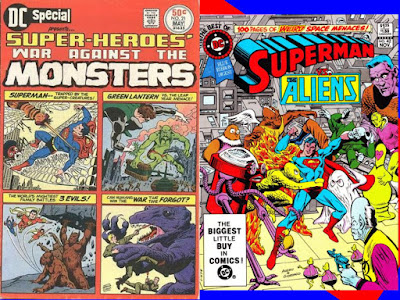 A bit of luck saved Earth, and Superman, and, as any Silver Age fan who wants to read this tale of invading insect alien monsters, you can find it reprinted in DC Special #21 (April-May, 1976) or in Best of DC #42 (November, 1983)!

Posted by Dave's Not Here Comic Blog at 9:45 AM