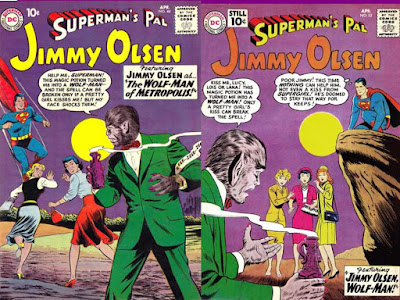 Things have gotten hairy for Jimmy Olsen before, but nothing beats the times Jimmy got REAL hairy....when he took a potion and turned into a....wolf-man!

Jimmy did this twice in his life, and here are the tales where it happened!

The Wolf-Man Of Metropolis 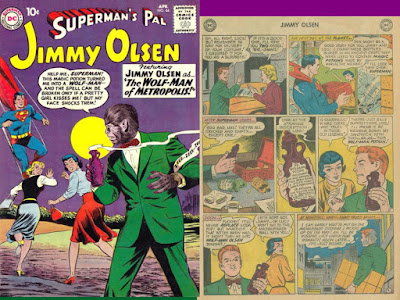 Being Superman's pal has advantages, like when the Man of Steel brings you exotic potions from Merlin...but, you shouldn't drink them like Jimmy Olsen did in Superman's Pal Jimmy Olsen #44 (April, 1960) by Otto Binder, Curt Swan and Stan Kaye (with a hair-raising cover by Swan and Kaye). 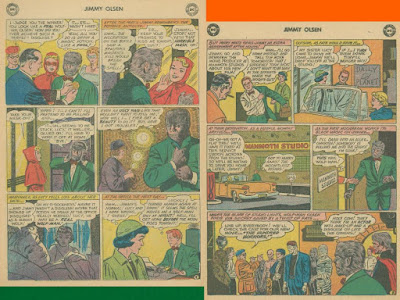 Of course the only potion to survive was one that would change Jimmy into a wolf-man, and this would cause trouble for Jimmy and his girlfriend Lucy (Lois Lane's sister).  Jimmy was suppose to take Lucy to a masquerade ball...but his change resulted in a change of costume for Lucy (and they won the prize as Little Red Riding Hood and the Wolf!).  But, Lucy wouldn't kiss Jimmy as a wolf at the end of the night (with a kiss from a pretty girl being the cure for the potion), so Jimmy was still cursed.  Jimmy changed back the next day, but Lois was suspicious.

So, when Jimmy was headed to a movie set for an interview, Lois and Lucy arranged to drive him, and Jimmy changed just before he got onto set.  Thankfully, it was a monster movie, so Jimmy fit right in (foiling Lois' plans of catching him this time).  Next day, Jimmy took money out of the bank to pay a girl to kiss him (oh, the innocence of those days!!), but that didn't go well, resulting in Jimmy using his signal watch to call Superman (who promised to find a solution for Jimmy). 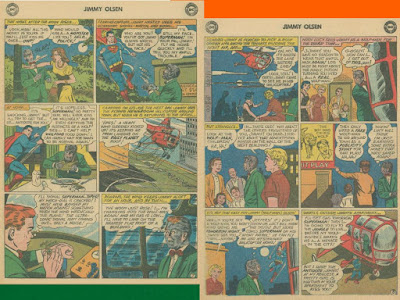 Next night, Jimmy was using the Daily Planet's Flying Newsroom but had to land in the city due to high winds and low fuel (as he transformed mid-air)....coincidentally at Lois and Lucy's apartment (but, an ad for play for The Boy Who Cried Wolf saved Jimmy, allowing him to claim to be taking an extra job in advertising).

Superman took Jimmy and his helicopter home, and had a solution for him, bringing a mysterious "Miss X" to kiss Jimmy (and cure him) in the dark.  Jimmy wondered who the girl was (and she was Supergirl, who was still Superman's secret weapon at this time!). 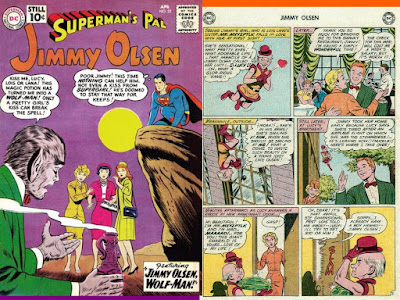 To be fair, the second transformation really wasn't Jimmy's fault in Superman's Pal Jimmy Olsen #52 (April, 1961) by Jerry Siegel, Curt Swan and Stan Kaye (cover by Swan/Kaye), but it was another hair raising tale for the cub reporter! 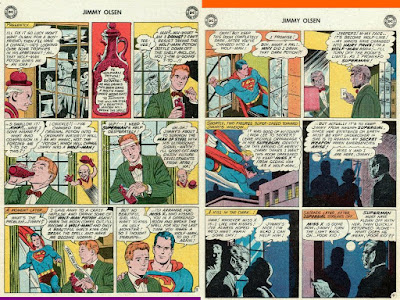 This time, Mr. Mxyzptlk was on Earth to avoid his girlfriend, Miss Gzptlsnz, and became infatuated with Lucy Lane (Jimmy's girlfriend).  Lucy turns down Mxyzptlk's advances because she's Jimmy's girlfriend, but that just convinces the imp that he has to get rid of Jimmy.

So, Mxyzptlk casts a spell on Jimmy to get him to drink the Wolf-Man potion!  Jimmy calls Superman, who promises to use the same solution (and goes to get Supergirl, who will meet Jimmy in a dark room as "Miss X")...except it doesn't work (as it is Mxy's magic that did it, not the potion!).

Jimmy and Lois finish an assignment, but Jimmy is turning to a wolf-man as Lois finishes the story, and sees Jimmy's predicament.  Lois takes one for the team and kisses Jimmy (but it doesn't work!). 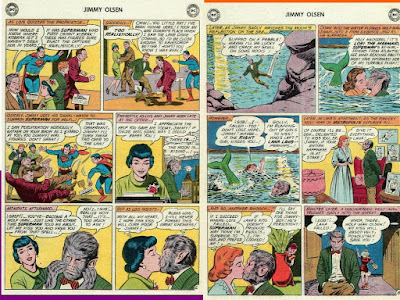 Jimmy is on a date with Lucy the next day, and, at the end, changes into the wolf-man....and this time, will kiss him (but, again, still doesn't work).  Depressed,  Jimmy goes alone to the beach (and, true to Olsen luck, falls in the water).  He's rescued by Lori Lemaris (Superman's mermaid ex-girlfriend) who also kisses Jimmy (still....nothing).

In desperation (yeah, right), Jimmy tries Lana Lang (again, no luck with that kiss either).  Yet a mystery woman shows up saying she has the cure....and her kiss does change Jimmy back!  She is Miss Gzptlsnz (in her first appearance), who came to Earth to check on her boyfriend (and is mad at him).  She tricks Mxyztplk into saying his name backwards and going home to the fifth dimension, and then soon joins him.  This all wraps up with Jimmy on a date with Lucy (who won't kiss him because she feels he got enough kisses lately! 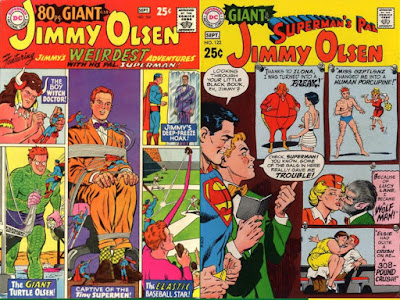