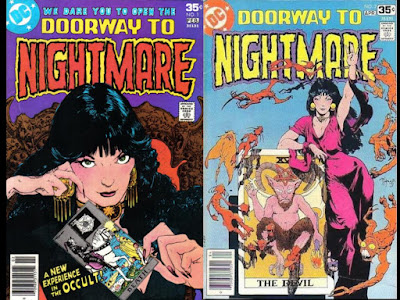 Walking down the street, you see that place, the one they talk about in whispers.

You're not sure you should go in, with all it's occult trappings.

It seems odd, but also inviting...dare you step through the doorway to nightmare and meet....Madame Xanadu?

Readers were faced with that choice in 1978, and here are her first two tales! 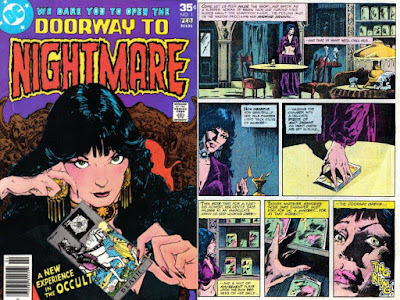 Cindy Barns was the first person to step through Madame Xanadu's doorway in Doorway To Nightmare #1 (January-February, 1978) by David Michelinie and Val Mayerik (with a stunning cover by Mike Kaluta) to find Madame Xanadu, ready to give her a tarot reading after she polished her jars. 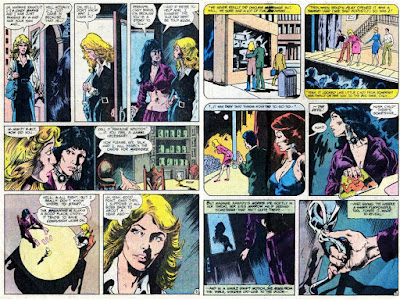 Cindy was an actress who came to New York to make it big, and even got a part in a play...to lose it arguing with the director about lines.  But, she impressed Brad Jacobs, writer of the play and one of the hottest playwrights on Broadway, who took Cindy in to get more writing advice.

The two became close, having shared interests, but things went to the devil when Erika got involved (who happened to show up then at Xanadu's shop, to make an odd threat, but would not enter).  Erika was Brad's set decorator, and she didn't approve of Cindy.  Brad's health was starting to deteriorate, and he would wander off with Erika at times.  Curious, Cindy followed them once, and saw them performing some odd ritual. 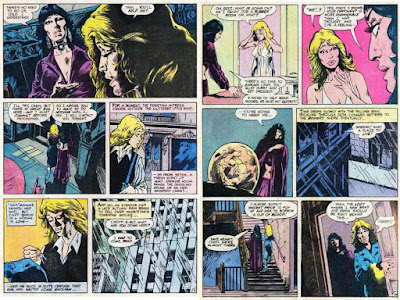 Madame Xanadu informed her some great evil was involved, and would have to do research before acting, so Cindy should wait to act.  Cindy was in love with Brad, and couldn't wait to act, so she went to see him, where he ended his relationship with Cindy.  Distraught, Cindy went home to her apartment, where Madame Xanadu saved her from a demon (or was it a trick of the light?).  The duo went to the location where Erika and Brad did their ritual....to find them there again.

It is revealed that Erika was using sorcery to drain Brad's soul to save her from cancer, but Erika was Erikhatmen, daughter of Tutankhamen, and that she had been using sorcery to keep her cancer at bay since 4500 BC!  Madame Xanadu said she couldn't interfere, yet Cindy could, and did, breaking the pyramid device Erika used to drain Brad, ending Erika's unnaturally extended life, but starting a blaze which seemed to consume Madame Xanadu as well.  Passing by Xanadu's shop a few days later, Cindy and Brad were surprised to see Madame Xanadu there, polishing a new jar in her shop (which if you looked at closely, contained a lock of red hair, the same as Erika's!).

The letter's page, Tarot Readings, promised this title would be something a little different, and would cover ancient mystic history, as well as inviting readers to write in about the issue, or any odd supernatural occurrences in their lives. 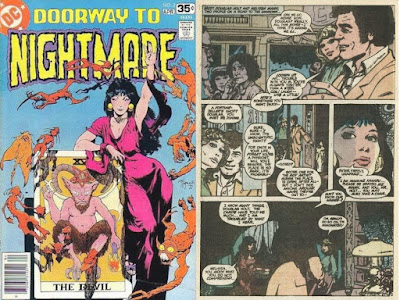 The next two to enter through Madame Xanadu's Greenwich Village doorway were Douglas Holt and Melissa Mann in Doorway To Nightmare #2 (March-April, 1978) by Gerry Conway and Vicente Alcazar (with cover by Mike Kaluta). 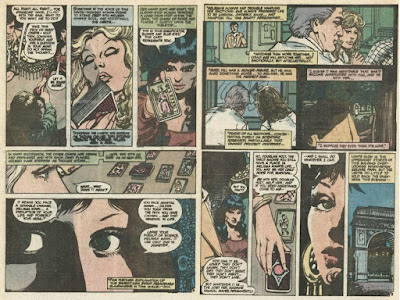 Douglas was an artist, and Melissa a physicist, and Madame Xanadu was ready to give the lady a reading (even if Melissa didn't believe).  Madame Xanadu asked her to slow down her work, which upset Melissa, who didn't want to stop Project Doorway, and left in a huff, figuring this a scam that Douglas put the tarot reader up to.

Douglas explained to Madame Xanadu that Melissa was working on a project with Professor Hampton Hill at New York University, but that she was also falling in love with the professor (or what she thought was love, as she, like the professor, were both coldly devoted to science).  Madame Xanadu suggested he should still watch the pair, and come to her if he needs help.  Melissa and Hill continued work on Project Doorway, and succeeded in opening a dimensional rift, unleashing a small horde of demons, which froze the pair to inaction, but Douglas was there to smash the machine, with the demons fading away. 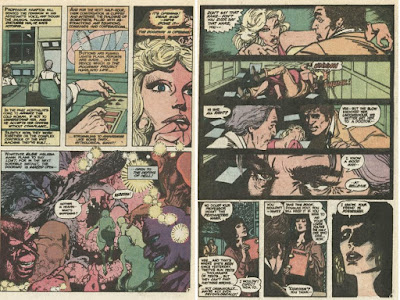 But, Melissa suddenly had newfound emotion, and wanted to go out and eat and dance (and more) with Douglas, which he enjoyed.  The second night, the pair went to a party, but Melissa left with another man, and showed up to the lab in the same clothes the next day, and embraced and attacked Hall, then Douglas, with Hill having her committed at Bellevue Psychiatric Ward.  Douglas told all this to Xanadu at her shop, who gave him a book on exorcism, and told Douglas to prepare.

Douglas and Xanadu went to Bellevue, where Hill was waiting with Dr. Grant, who was saying he had little success treating Melissa, so they let Douglas and Xanadu set up.  It seems Project Doorway did release a demon, who took up residence in Melissa, and Xanadu and Douglas had to cast it out, which they did, but while the battle freed Melissa, the experience was too much for Hill, who became a new resident of Bellevue (without supernatural assistance).  As the happy couple left, Madame Xanadu did as well, with a new full jar for her collection.

Tarot Readings had no letters yet, but did feature a history of the Tarot by Bill Kunkel. 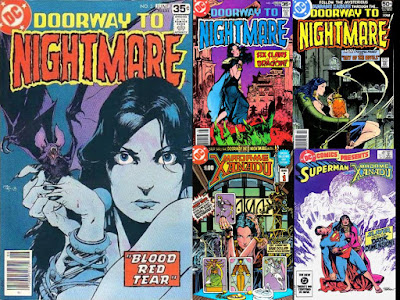 Madame Xanadu had three more issues of Doorway To Nightmare in the 1970s, then moved into a few issues of Unexpected for a bit, then her own title for one special issue in the early 1980s, as well as meeting Superman (and joining the larger DC Universe), a group of tales that it is a mystery as to why they haven't been collected in a tradepaperback.