A Quick Investigation Of Jonny Double 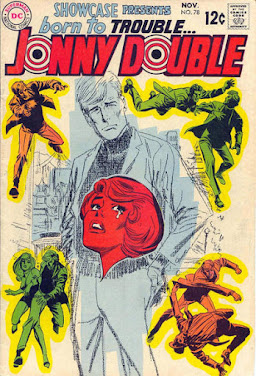 If you're in trouble, look for Jonny Double!

..handling the cases that would be too tough for any super hero, but still getting involved in cases that range from strange to downright super, better at solving cases than getting paid.

Here's a look at his premiere, and how he bounced around the whole DC Universe for a time (all starting with this issue with a Dick Giordano cover). 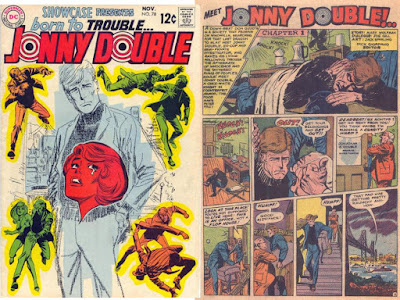 Wilson Twain has a case for Jonny, as he is being threatened by the Syndicate (who already offed his connected brother, leaving a picture with Mr. Twain). 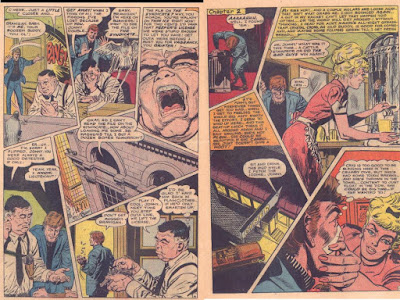 Checking with his ex-boss, Lt. Branigan, Jonny gets a little Syndicate info, and pumps the pool hall for info....getting his head handed to him.  After getting patched up at the local diner by Crystal Cross, Jonny goes back to Mr. Twain, to find the legal firm of Piker and Glass involved, and, after another scuffle (in a fun house), brings down his men....but, Jonny is stiffed on the bill by Mr. Twain!

A quiet premiere, but more was in store for this man!

To Call A Deadman 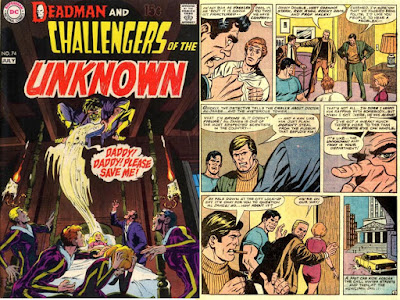 Jonny showed up next in Challengers of the Unknown #74 (June-July, 1970) by Denny O'Neil, George Tuska and Neal Adams, but his role was to bring the Challengers the info on a Dr. McJames (who stole a ruby), but Jonny realized more was going on (this would lead the death-cheating Challengers to meet Deadman!).

The Face Of The Dragon 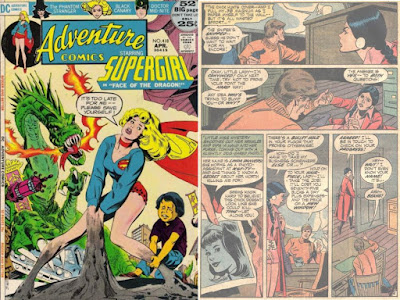 Next, Jonny Double appears in Adventure Comics #418 (April, 1972) by Len Wein, Jose Delbo and Bob Oksner, with Oksner providing the cover.  This time around, Double is hired by Nasthalia Luthor to trail Linda Danvers (with "Nasty" telling him she is planning to kill him!).  Really, Luthor's niece wants Double to prove Linda is Supergirl.  Jonny follows Linda to Chinatown, where she gets involved with the Tong and an illusion casting Batman villain, Dr. Tzin-Tzin.  After Supergirl takes care of business, Jonny returns to "Nasty", refusing to take the case and not getting paid (but wondering if Linda is Supergirl). 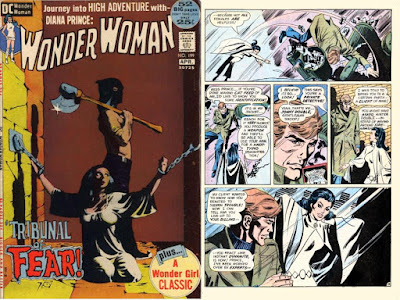 Jonny encounters Diana Prince (the currently powerless Wonder Woman), and challenges her to a duel.  Diana beats him, and Jonny offers her a job, as he is employed by nightclub magnate, Fellows Dill.  Diana eventually agrees to work with Jonny (as Dill offers to finance an operation to restore the sight of Diana's mentor, I-Ching.  Diana and Jonny get involved against the Tribunal, a religious organization opposed to the Dill, who is seen as the "dean of beautiful women".  Diana and Double get involved fighting the Tribunal, with Double eventually being shot...by Fellows Dill! 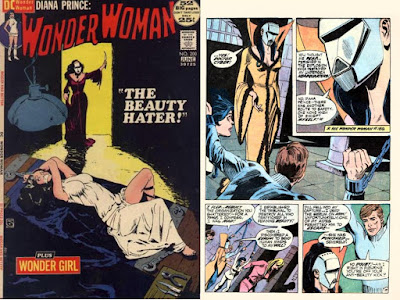 Wonder Woman #200 (May-June, 1972) by Denny O'Neil and Dick Giordano (with cover by Jeff Jones) picks up where the last issue left off, with Diana taking Fellows Dill down, and Double grabbing his gun.

Dill has been driven insane, and the detectives follow his trail to the Tribunal headquarters in the mountain.  They end up at Dill's estate, where they find old Wonder Woman foe, Dr. Cyber, who had created the Tribunal to destroy all things of female beauty, as she had her face disfigured when she last faced Diana Prince.  Dr. Cyber plans to take Diana's face (with help from Ra's Al Ghul's scientist, Dr. Moon), but Diana foils her plan, and escapes with Jonny Double. 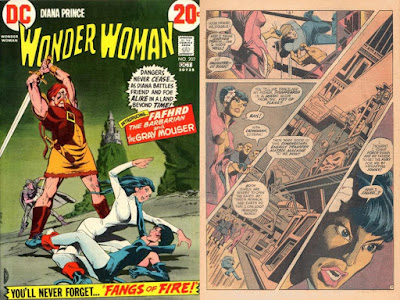 After being kidnapped off panel in the last issue, Diana is forced to chase down Jonny Double, who is a prisoner of Lu Shan (I-Ching's daughter).  There is a battle between Diana, Catwoman, Fafhrd and the Grey Mouser, and later with Lu Shan, eventually returning Jonny, Diana and Catwoman to Earth (more details on the Wonder Woman/Catwoman team-up here!). 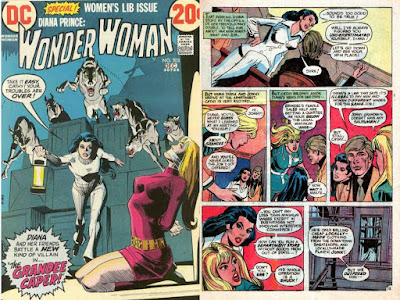 Diana gets a new job at Grandee's department store, and gets involved in her own trouble there, but does stop by to see Jonny Double and inform him of her new situation. 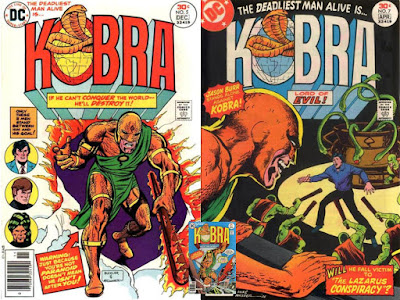 Jonny ended up being a target (along with all other San Francisco detectives) of Kobra (fresh off his last adventure), which ended with him working with Jason Burr and Randu Singh (and these adventures will be chronicled here soon, as they appeared in Kobra #5-#7 from 1976 to 1977!). 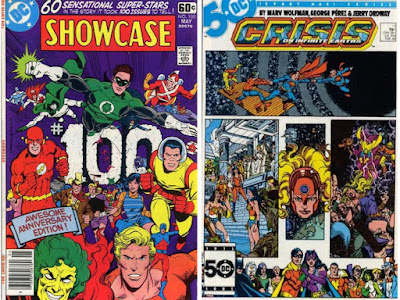 Jonny then showed up in Showcase #100 (May, 1978) though it was little more than a cameo, and then, worked with Harvey Bullock, Christopher Chance and Jonni Thunder at a detective's convention in Crisis On Infinite Earths #11 (February, 1986) solving the apparent murder of Angle Man, eventually getting revived for his own Vertigo series...still always broke, and always in trouble.