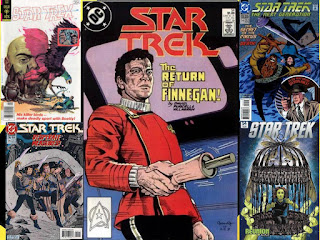 Star Trek had its first episode premiere on September 8th, 1966, and with "The Man Trap", boldly took viewers where they had never gone before.

Over that 54 year span, multiple comic book companies published adventures of the Enterprise crews, and here is a look at the few titles that happen to have a 54th issue. 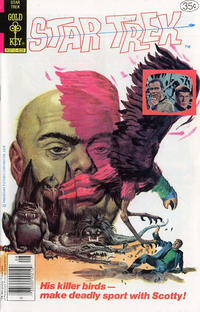 In Star Trek #54 (August, 1978) by George Kashdan and Alden McWilliams (and a painted cover by George Wilson), a rare focus on Scotty (though, as you can see by the photo inset, the adventures were usually those of Kirk and Spock), as the Enterprise's chief engineer had to face off against an alien and his killer birds!

Gold Key was the first company to have had Star Trek comics, focusing on the original crew, and they ran from 1967 until 1979, lasting for 61 issues (more info on the Gold Key run here!). 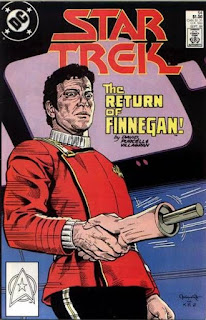 DC had the next Star Trek #54 (September, 1988), by Peter David, Gordon Purcell and Ricardo Villagran (with cover by Jerome Moore and Keith Wilson), focusing on the movie era crew, with Kirk having a chance to face off against his old Starfleet Academy rival, Finnegan!

James T. Kirk (as Captain, Admiral or even ensign) was often the focus of Star Trek comics over the years, as this article will clearly show! 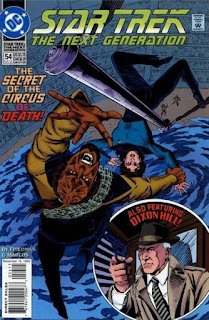 The only series not featuring Kirk to make it past 54 issues was TNG, with Star Trek: The Next Generation #54 (Late November, 1993) by Michael Jan Friedman and Pablo Marcos, with a cover by Rod Whigham and Carlos Garzon, is the third part of a story, where Captain Picard has to run through a holodeck program as Dixon Hill in order to save Worf and Deanna Troi.

The Next Generation had one of the longer lasting runs of any Star Trek comic, going for 80 issues from 1989 to 1996, and even their final episode and first two movies were covered in a comic book! 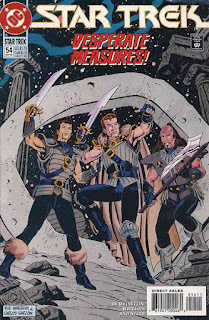 The other longest lasting Star Trek series was DC Comics second run with the original crew, with Star Trek #54 (November, 1993) by Howard Weinstein, Rod Whigham and Arne Starr (with cover by Rod Whigham and Carlos Garzon), with Kirk and crew dealing with a timeline where the Romulans have been wiped from existence, and, in this second part of five, Kirk and Colonel Worf (from Star Trek VI: The Undiscovered Country), going back in time to make sure a great man is assassinated (to fix the timeline).

DC handled the adaptations of the third through sixth Star Trek movies, and look here for the covers of them (as well as a little history of Spock in the comics). 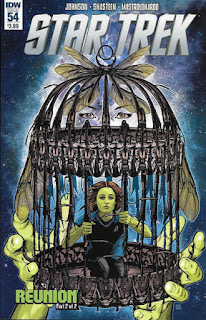 The most recent series to go for any length of issues was from IDW, and their issue of Star Trek #54 (February, 2016) by Mike Johnson and Tony Shasteen, focuses on Lt. Gaila, the Orion roommate of Uhura, who was forced to go back and marry a Pacari leader by a rebel Orion leader, with Kirk and the Enterprise crew risking galactic peace to save her!

IDW's Star Trek series mostly focused on the newer versions of the original crew, but mixed some original casts in over their 60 issue run. 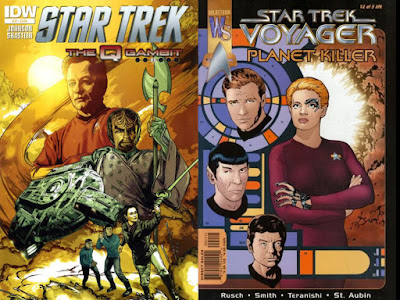 Sadly, Deep Space Nine and Voyager never had any series that lasted over 50 issues, Enterprise doesn't seem to make it into comics much, and Discovery and Picard are only really starting comics, but, so long as people boldly go, there will be Star Trek comics!

Posted by Dave's Not Here Comic Blog at 2:01 AM