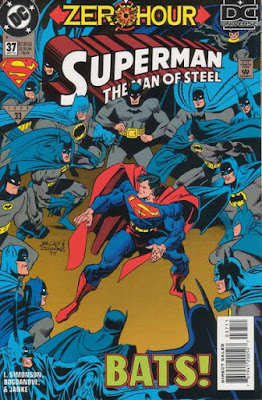 Celebrating Batman Day...with this cover for Superman: The Man of Steel #37 (September, 1994) by Jon Bogdanove and Dennis Janke...

....as thanks to the chronal confusion of Zero Hour, Superman met up with various versions of Batman, from his very first appearance through his established appearances from the 1940s and 1950s, the new look of the 1960s, return to the grimness of the 1970s, the Dark Knight future Batman and even the animated and movie serial Batman!
Posted by Dave's Not Here Comic Blog at 4:11 AM