Origin Of The Justice League Minus One 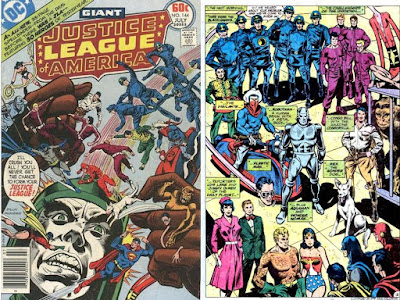 The Origin Of The Justice League  -- Minus One 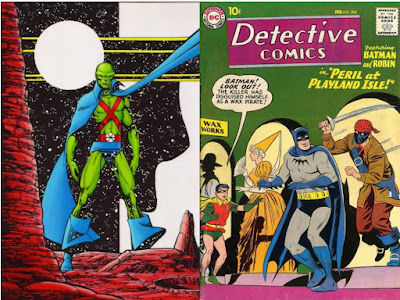 Martian Manhunter was the start of all this.  Brought to Earth by Dr. Erdel and his Robot-Brain in Detective Comics #225 (November, 1955), J'onn J'onzz had to hide in American society as detective John Jones, struggling to find a way to return home to Mars after his appearance startled Dr. Erdel to death.  Using his Martian abilities in secret, J'onn fought crime on Earth.

After destroying a cache of Martian weapons found on Earth (in Detective Comics #264 in February, 1959), J'onn was confronted by Commander Blanx, the white Martian who had sent J'onn into exile. 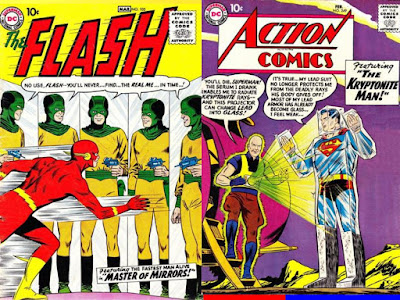 Narrowly escaping, J'onn was chased by Flash (Barry Allen), fresh from having confronted the Mirror Master (in Flash #105 from February-March, 1959).   J'onn and the other Martians escaped the Flash when confronted by paranoia from the residents of Middleton, who felt they were being invaded.

They were even suspicious of new hero, Flash, so he went to Metropolis to attract the attention of someone everyone would trust....Superman.  Superman did indeed show up (from Action Comics #249 of February, 1959), with Batman and Robin in tow (these three already a team), but, they also attracted the attention of Roy Raymond, TV Detective, who advertised for more heroes to come....and boy did they!  All the heroes (plus Daily Planet reporters Lois Lane and Jimmy Olsen) split up to cover three different reports of alien invaders.

The first team was composed of: 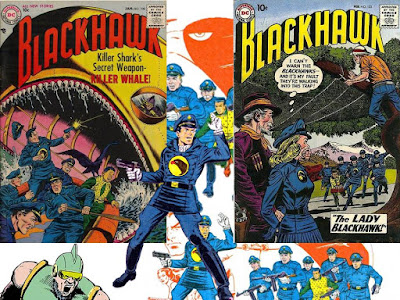 the Blackhawks (Blackhawk, Andre, Chuck, Olaf, Hendrickson, Stanislaus and Chop-Chop), international ace aviators who had fought in World War II, but now were professional adventurers.  Their Earth-1 adventures started in  Blackhawk #108 (January, 1957),  where they fought foes like Killer Shark and the War Wheel, were aided by Lady Blackhawk, and they had last appeared in Blackhawk #133 (February, 1959). 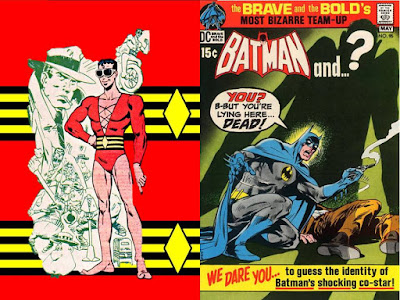 Plastic Man, the stretchable sleuth, had had a few variations across the cosmos, but this was the first appearance of this version, the Earth-1 Plastic Man, who would appear next (in what was chronologically his first appearance in Brave & the Bold #95 of April-May, 1971), and later in issues #11-20 of his own title, and a run in Adventure Comics. 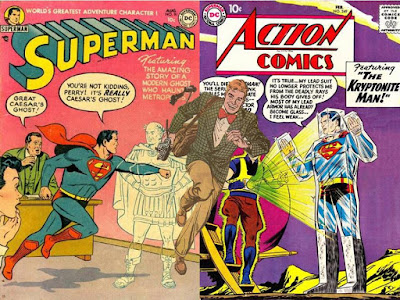 Superman's Pal, Jimmy Olsen, or at least the Earth-1 version of the reporter who first appeared in Superman #91 (August, 1954), rounded out the team (with Jimmy coming fresh from Action Comics #249 of February, 1959), and even had his own title, Superman's Pal Jimmy Olsen, that lasted 163 issues from September-October, 1954 to February-March, 1974.

The heroes faced off against a mysterious man in a cabin, who disappeared from that house, even though it was surrounded by the heroes.....and where (and when) he went to was revealed as he first appeared a little later, in Showcase #20 (May-June, 1959), and you can figure out who he is by going here!

The second team was made up of: 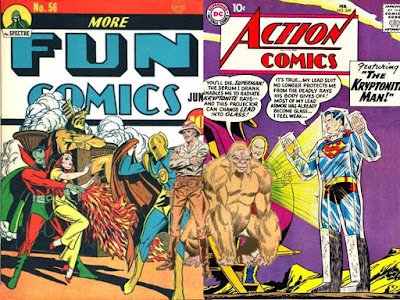 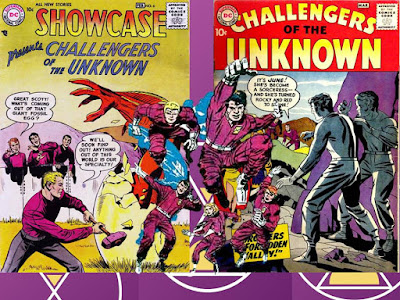 The Challengers of the Unknown (pilot Ace Morgan, acrobat Red Ryan, boxer Rocky Davis and scuba diver Prof. Haley), who were men living on borrowed time since Showcase #6 (January-February, 1957), when the group survived a plane crash together while headed for a TV Show appearance.  They remained together to fight odd menaces like Ultivac, as well as alien invasions, adding June Robbins as a member, with the team last in Challengers of the Unknown #6 (February-March, 1959). 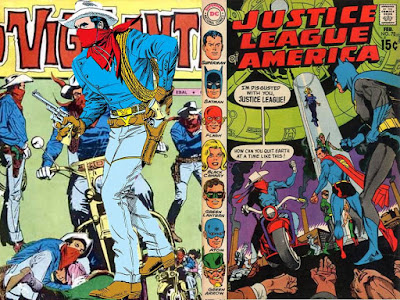 Vigilante has a bit of a confusing history, looking just like his Earth-2 version, but this Vigilante first appeared in Justice League of America #78 (February, 1970), so this is a chronologically earlier appearance of the western warrior, who uses six-guns, motorcycles and lassos to hunt modern criminals. 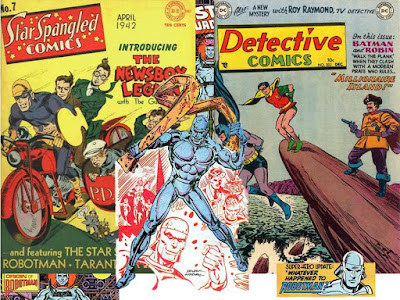 Robotman is even more confusing, having started out on Earth-2 in Star-Spangled Comics #7 (April, 1942), having his human brain transferred out of his dying body into the robot form, later retroactively appearing in World War II group All-Star Squadron as a member, he must have left Earth-2 for Earth-1 sometime after Detective Comics #202 (December, 1953), his last Golden Age appearance. 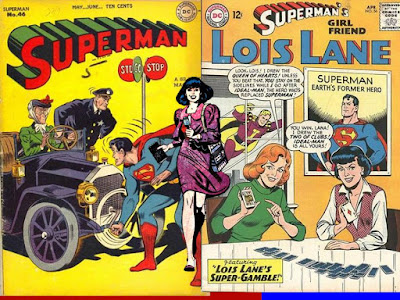 Superman's Girlfriend, Lois Lane rounded out this group, having first appeared (as an Earth-1 version) in Superman #46 (May-June, 1947), and Lois used her reporter's savvy well here (having last appeared in Superman's Girl Friend, Lois Lane #56 (April, 1965, a flashback story itself), and Lois' title lasted 137 issues from March-April, 1958 to September-October, 1974.

This batch faced a flying menace in the woods, who was chased by all the heroes, except Lois, who figured out the mysterious figure was trying to get them to leave and area, but, that spaceman did disappear after being hit by an energy beam (and he explained it to his girlfriend, as these two were appearing between Showcase #18 and #19 of 1959; he later helped Superman save Lois and Earth, as explained here). 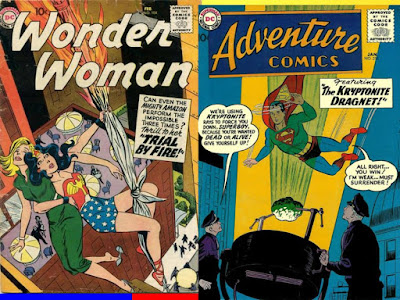 The third team was made up of the future charter members of the Justice League of America:


These heroes ended up out on the west coast, in Coast City. 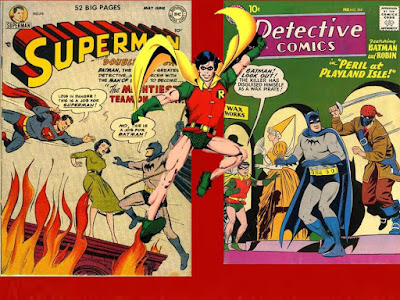 There were a few others investigating this with them as well... 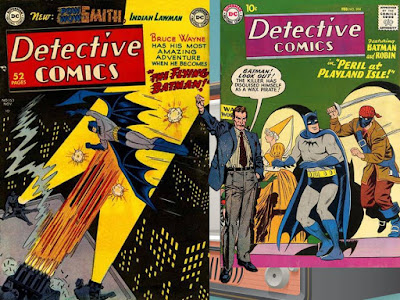 Roy Raymond, TV Detective, who was the host of the Impossible But True TV show, and premiered in  Detective Comics #153 (November, 1949), but appeared here along with his assistant, Karen Duncan, fresh from Detective Comics #264 (February, 1959) and getting the scoop for his viewers. 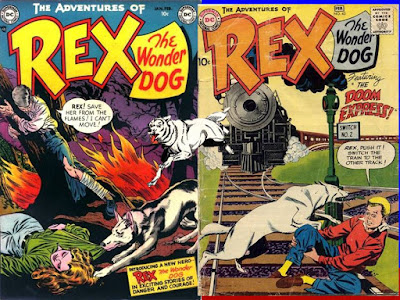 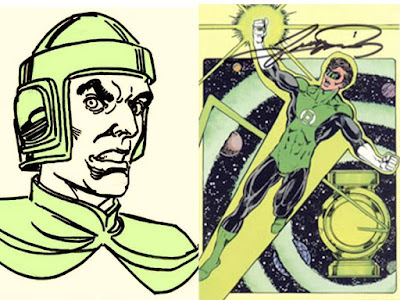 These heroes did work together safely, after finding the captive Martian Manhunter and defeating Commander Blanx and his Martians at the Ferris Aircraft facility (where the activities of the aliens were reported by test pilot, Hal Jordan).  Deciding it was still a little too soon for these heroes to gather as a team, as people were still a little too paranoid, they waited a few months (to when Earth was being invaded again) to band together and form the JLA (along with new hero, Green Lantern, who, unbeknownst to the heroes at the time, was test pilot Hal Jordan!). 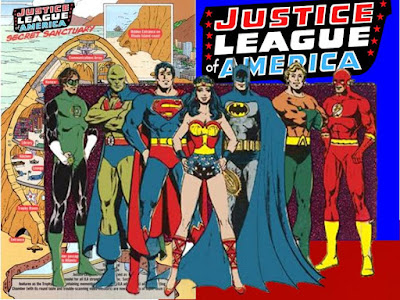 Green Arrow had not been present (and joined the JLA later), as he and his ward, Speedy, had just solved a case on the island that created the Green Arrow (as revealed in Adventure Comics #256 of January, 1959) and had stayed for a little vacation, missing out on the invasions)... ...and Green Arrow was sad to have missed the original JLA meeting (As well as the time they formed again facing the Appellaxians), and the recent brief return to Earth for a bit of the Martian Manhunter.