The Immortal Foe Of The Challengers, Multi-Man 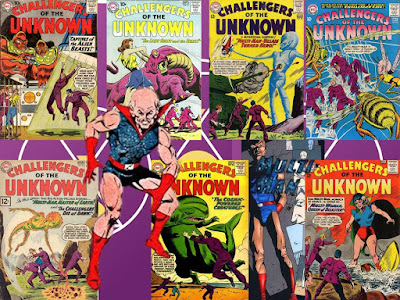 The Challengers of the Unknown were four extraordinary men who survived a near death experience, then promised to use their skills (and now borrowed time) to help others.

So, it would make sense that there most dastardly villain, Multi-Man, would be a man who was looking out for himself, gaining powers, but losing the fear of death....becoming an immortal!


The Man Who Conquered The Challengers 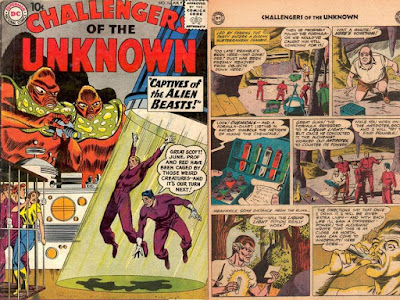 It all began in Challengers of the Unknown #14 (June-July, 1960) by Ed Herron and Bob Brown, when we met archeologist assistant, Duncan Pramble.

To be fair, it started a little earlier than that, as the Challengers were helping archeologist Dr. Charles Ferriss to find an immortality elixir created  by ancient alchemists on a small island. 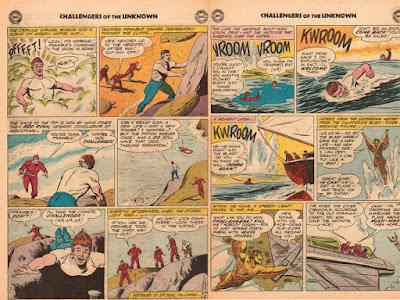 Pramble wanted immortality for himself, and found and drank the elixir.  This "liquid light" gave him powers...and the ability to gain new powers after facing fatal events (translate: dying).

Pramble had made himself immortal!).  Pramble started with energy powers, then, after dying twice (and being reborn with new powers each time, first aquatic powers, then aviatory), the Challengers finally capture the villain they have dubbed Multi-Man alive, and have him imprisoned (for though the antidote takes his powers away, it does not remove his ability to be resurrected).

The Return Of Multi-Man 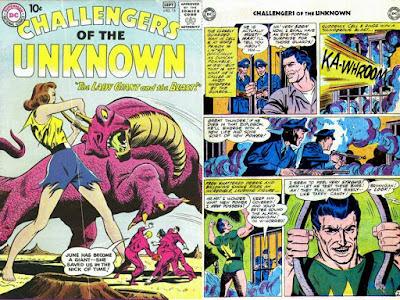 Of course, Multi-Man returns, rather quickly, in Challengers of the Unknown #15 (August-September, 1960) in an issue likely still written by Ed Herron, with art by Bob Brown.

Getting help from a man named Gurk who smuggled explosives into his cell, Multi-Man escapes with a blast, with new powers of strength and invulnerability (which allow him to temporarily defeat the Challengers). 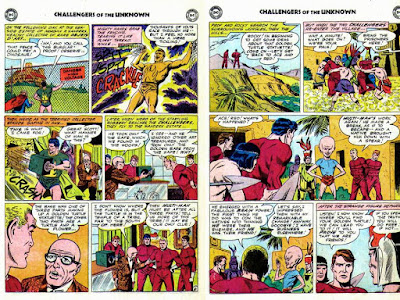 Meeting up with Gurk, the two go to look for a Golden Turtle (an artifact that leads its possessor to a treasure trove in South America).  The Challengers douse Multi-Man with the antidote again, but Pramble gets a native to kill him with a spear, returning to life with increased brain power (and the bald, diminutive look that becomes his signature look).

The Challengers are able to defeat him and Gurk, but Pramble is now stuck in this form, being too smart for his own good. 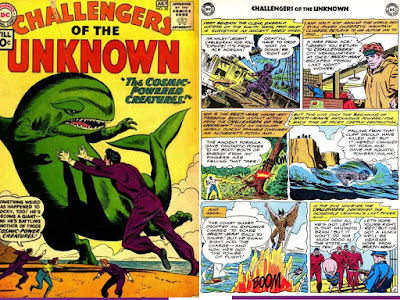 No prison can hold the Multi-Man, as he escapes yet again in Challengers of the Unknown #20 (June-July, 1961) by Arnold Drake and Bob Brown, using simple materials found in his cell (as June Robbins, an addition to the Challengers team reports to Prof and Red).

Multi-Man breaks into a rocket plant, making off with the payroll, as well as building himself a flying device which allows him to escape Rocky and Ace. 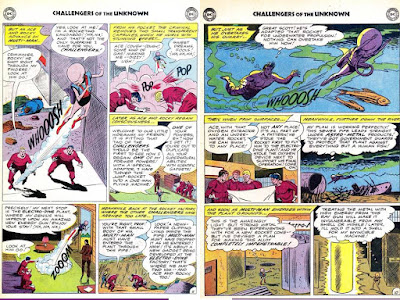 The team eventually reunites to battle Multi-Man and the new gadgets he's invented (which approximate other powers he has had, like taking oxygen directly from water and projecting energy beams), all to help him get the pieces that will allow him to create an ultimate machine for himself.

The five Challengers are able to stop him before he finishes, vowing to put him away in an escape proof cell. 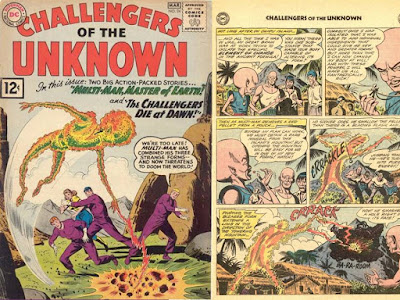 That escape proof cell only worked for a short time, as Multi-Man was back to being a menace on the loose in Challengers of the Unknown #24 (February-March, 1962), likely written by Arnold Drake, with art by Bob Brown.

This time around, Multi-Man has isolated the Element of Change in the formula which changed him, allowing him to take it, and manifest new powers... 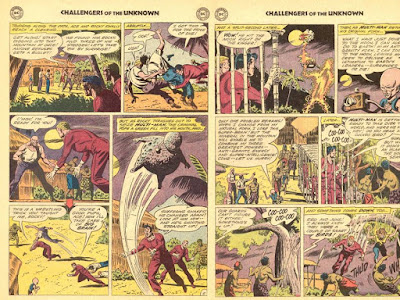 ...such as an energy form and a sponge form (then a combination of the two), all as he battles the Challengers on Owapu Island.

Multi-Man is building an energy device which he plans to use to take over the world, but, the Challengers defeat him with a new antidote Prof has made.  But, instead of dying this time, Multi-Man only gets a bump on the head, trapping him in a new prison, his own mind, as he now seems to have amnesia. 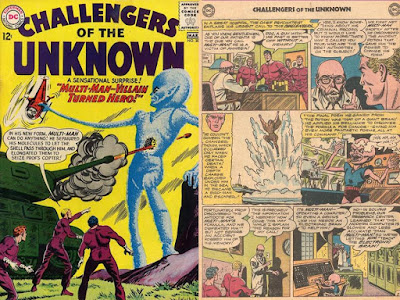 Multi-Man is wondering who he is, as we wonder who the writer of Challengers of the Unknown #30 (February-March, 1963) is (likely Arnold Drake), with art by Bob Brown.

This time around, the Challengers work with Multi-Man, who has no knowledge of his past criminal life, but still possesses his super smarts.  The team and Multi-Man work to stop the no longer dormant Okaluna Volcano, activated by a meteor. 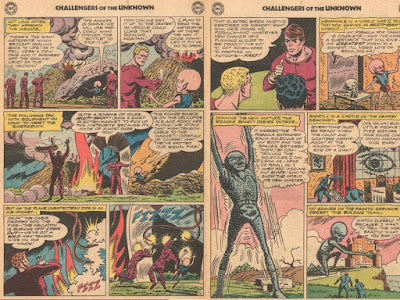 The group successfully plugs the volcano with the meteor, but an electric shock that Multi-Man receives, revives his criminal memories.  Pretending to still be afflicted, Multi-Man remains with the team as a rash of chemical thefts plague the area.

It was Multi-Man, gathering the chemicals he needed to create a new ultimate form for himself that allows him to manipulate the spaces between his molecules.  This allows him to capture the Prof (to prevent him from creating another antidote).  Still, Prof is sneaky, and finds a way to send smoke signals to Ace, which allows him to create the antidote, stopping Multi-Man again. 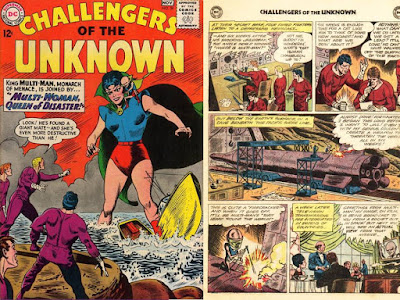 They might as put a revolving door on that prison, as Multi-Man gets loose again in Challengers of the Unknown #34 (October-November, 1963), in this tale by Arnold Drake and Bob Brown.

This time around, Multi-Man creates a magnetic device with which he threatens the United Nations....all to get them to give him his own criminal country.

But, even if they follow his demands, he worries he will be lonely, so he creates himself a giant robot female companion (oh, the innocence of the Silver Age), along with making a new liquid light formula to give himself a new giant form which he feels will be worthy of his giant Multi-Woman. 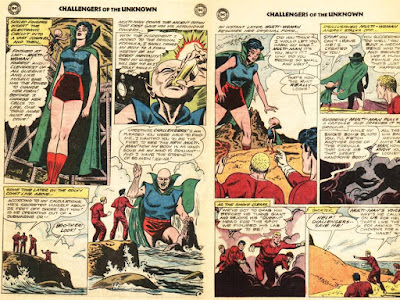 The Challengers battle Multi-Man and Multi-Woman (and she exhibits powers similar to those Multi-Man had previously, all made mechanically, of course).  The team does douse him in the antidote, shrinking him to his previous, big brain size....which repulses the giant woman....but, now how to stop her?
The Challengers get help from Multi-Man, who creates a vibratory device hidden in a gem.  Multi-Woman picks up the faux diamond (even a robot woman thinks diamonds are a girl's best friend), and the heroes use it to vibrate her to pieces!  In all the confusion....Multi-Man escapes, ready to plot new evil.

The Spy In Challenger Cave 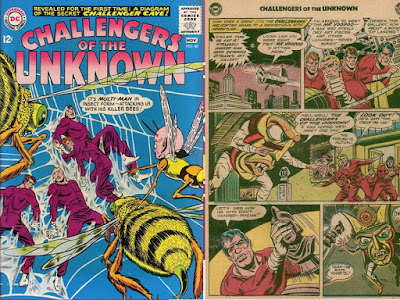 It took a little time for Multi-Man to have a new plan, but he finally put it into motion in Challengers of the Unknown #40 (October-November, 1964) by Arnold Drake and Bob Brown.

This time around starts with the Challengers stopping Mr. Voodoo from stealing from an art gallery... 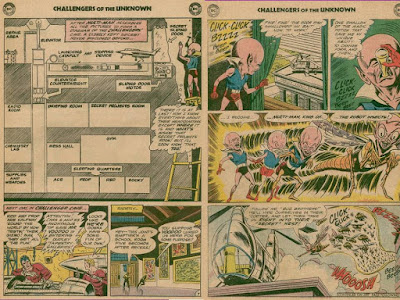 ....only the Challengers don't know that he was really Multi-Man, using the theft as a feint to sneak a robot spider aboard the Challengers' plane, so it can transmit plans of Challenger Mountain back to Multi-Man.  With the layout of their headquarters (provided in a diagram in the issue), Multi-Man plans a new attack on the team in an insect form, using that new form to lead a group of robot bees against the Challengers....at least until Prof distracts him by releasing a tse-tse fly, which sends him into a panic, setting the robot bees on each other without Multi-Man control, and allowing the team to capture him again....with the last of Multi-Man's solo battles with the Challengers for a while. 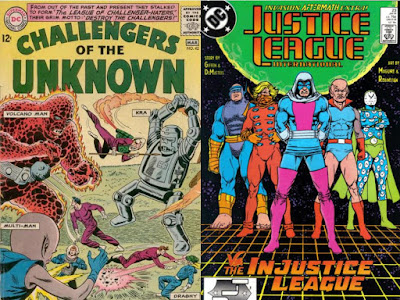 Multi-Man does return to face the Challengers again, this time with other foes like Kra, the Volcano Man and Drabny (with the team getting coverage in a later article, as they each have their own story), the team appears in Challengers of the Unknown #42, #45, #48, #55, #60 and #61, as well as Doom Patrol #102) in the aptly titled League of Challenger-Haters.  Multi-Man returns with a new team, the Injustice League, this time working with Major Disaster, Clock King, Cluemaster and Big Sir, starting off they team-ups during the Invasion! crossover in Justice League International #23 (January, 1989), facing the JLI not the Challengers (but the Challengers were in existence before the JLA), he works with these people, even when in prison during Joker's Last Laugh (and, during that, Joker needs a specific power from Multi-Man, so has to kill him again and again to get him to that power).. 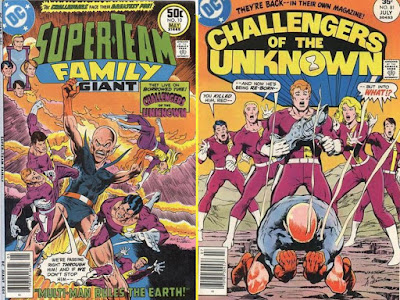 Between those times of working with teams, Multi-Man  returns on his own, in Super-Team Family #10 (April-May, 1977), and in Challengers of The Unknown #81 and #84 of 1977, creating his usual brand of menace after escaping the Challengers again... ...even with a little resurrection at the end as he faced the team, along with their new allies of Deadman and Swamp Thing, then a one issue battle against Wonder Woman in Wonder Woman #257 in July, 1979. 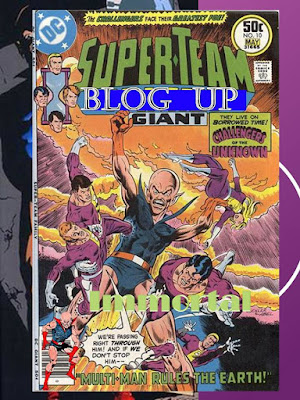 A good enough place to mention that this blog is participating in the Super Blog Team-Up, which is part of the reason that Multi-Man was covered....as an immortal villain!

Here are a few others that are participating, and hope you enjoy them as much as you did checking out what has been written here!  Check hashtag #SuperBlogTeamUp or #SBTU or below....


(all links should be live soon, keep checking back). 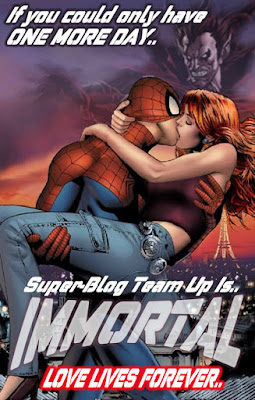 
Black, White and Bronze: What Price Immortality? A Review of Red Nails 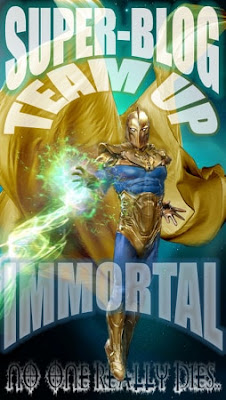 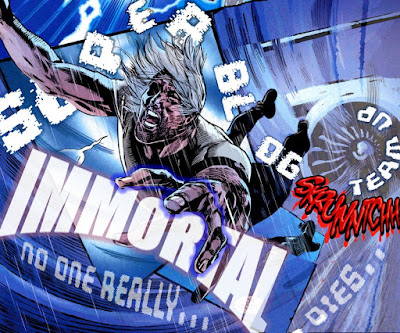 In My Not So Humble Opinion : It Came from the 1990s: Ivar theTimewalker


Vic Sage of Pop Culture Retrorama: I Am Legend

The Source Material Comics Podcast: Vampirella “Roses For The Dead” 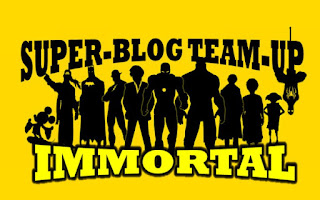 Posted by Dave's Not Here Comic Blog at 1:01 AM