What If There Were Two Versions Of Batman 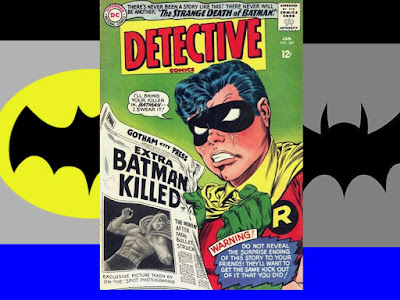 Dealing with the death of Batman.  Seems odd but true, hinted at in this issue of Detective Comics, but not something come about in the normal way.

Spoiling the secret hinted at on the cover....so, read on only if you dare!


The Strange Death Of Batman 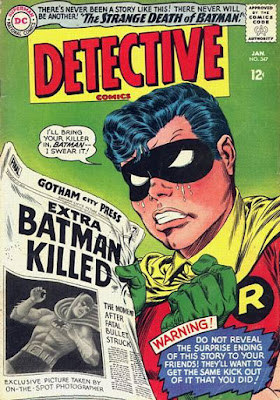 In the main part of the story of Detective Comics #347 (January, 1966) by Gardner Fox, Carmine Infantino and Joe Giella, the Dynamic Duo faced off against a new foe, the Bouncer.  The Bouncer was a criminal metallurgist, who created a suit out of a special combination including metal and plastics that he called Elastalloy, which allowed him to rebound off of any material.

The Bouncer was able to best Batman and Robin multiple times, before Batman had figured out a way to beat him, using science to stress the material of the villain's costume (and gun), which prevented them from bouncing, allowing Batman to be victorious against this baffling bad guy. 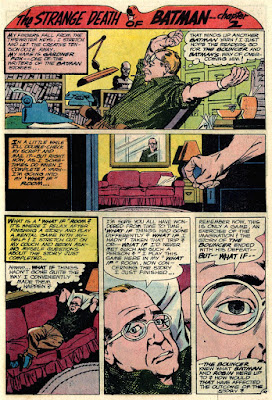 Here's where readers are suddenly introduced to Gardner Fox, the man who had penned this very tale!


The writer of the tale takes you through his thought process for the issue, but then takes the reader along a different path...one where Batman's plan was not successful, with the Bouncer killing Batman with his gun.

Robin mourns his mentor, with the Justice League promising the lad that they will bring in the villain, but Robin does it on his own anyway, instead of finding the elastic limit of Elastalloy, he gives it elastic fatigue.  Robin defeats the villain, but is still alone....until he hears the voice of Bruce Wayne! 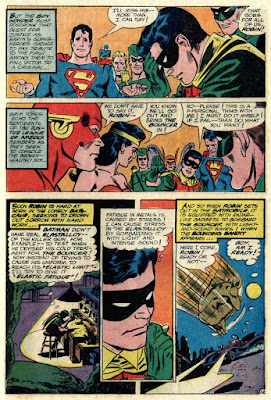 It is the Silver Age introduction Batman of Earth-2, who, since his Robin had grown up, came to Earth-1 to now be a mentor to young Robin, bringing along the Earth-2 Alfred as well (Alfred had been thought to be dead at this time).

Now, this was still early in the history of the multiple Earths, taking place between the 3rd and 4th JLA/JSA team-ups, and certainly before readers had been introduced to the grown up Earth-2 Robin...

....but, a real interesting little tale allowing Gardner Fox to quietly sneak a little of the DC Universe into Batman's Detective Comics.
Posted by Dave's Not Here Comic Blog at 4:44 AM