Superman Times Two Plus One 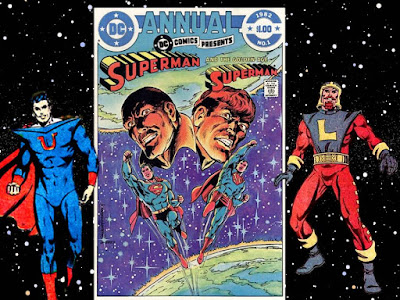 The more things change, the more they stay the same.  That's true wherever you might go, even across the reaches of the DC Multiverse.

Not sure about that?  Well, here's a look at that philosophy in action, with DC Comics Presents Annual #1 (September, 1982), by Marv Wolfman, Rich Buckler and Dave Hunt, all under a cover by Rich Buckler and Dick Giordano. 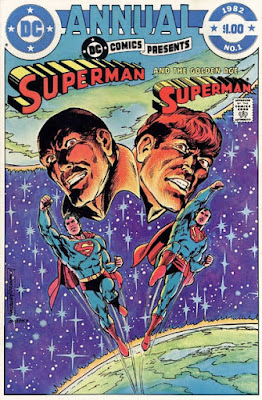 It all stars with a battle between Superman and Luthor, as Lois watches.  But, it plays out a little differently depending on which Earth you live on.

On Earth-1, reporter Clark Kent has to avoid Lois Lane to go and fight bald Lex Luthor as the JLA's Superman, saving the Daily Planet (a subsidiary of WGBS Communications) from his attack.

On Earth-2, editor Clark Kent gets help from Lois Kent to go and fight red haired Alexei Luthor as the JSA's Superman, saving the Daily Star from the extreme attack.


Still, the Luthors end up captured and in jail, with the Supermen victorious, and Metropolis safe.

But, a new twist...in jail, the Earth-1 Luthor plans his escape, by switching places with the Earth-2 Luthor....leading to each Luthor taking on the other's Superman...with similar results, and the two Superman deciding to imprison the two Luthors in the Limbo dimension between worlds. 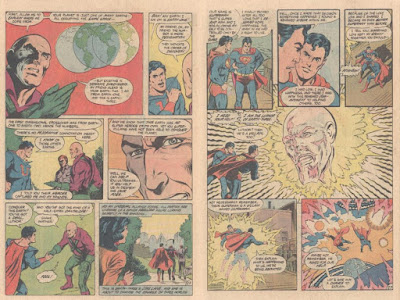 Still, the Earth-1 Luthor was ready....and using equipment in his green and purple suit, take the two to a third Earth, Earth-3, which has its own version of Superman... Ultraman.  But, this is no hero, he's a member of the evil Crime Syndicate of America, and is powered by Kryptonite.

The three villains go off to make plans, observed by this Earth's Lois Lane.  This Lois goes to warn Earth-3's Alexander Luthor....who calls in the two Supermen for aid, and, spurred on by Lois, puts on a super suit of his own, to finally give Earth-3 its first hero. 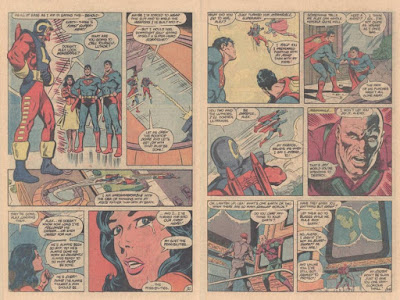 Meanwhile, the villains have continued their plan, albeit working against each other as much as together.  While the Earth-1 Luthor was looking to conquer the world, the Earth-2 Luthor planned on destroying Earth-1 and Earth-2 (while Ultraman was to betray them both).

Still, the heroes united battle their foes, with Alexander taking out Ultraman while Superman-2 takes down both Luthors, and the Superman-1 prevents the two Earths from merging into the same space. 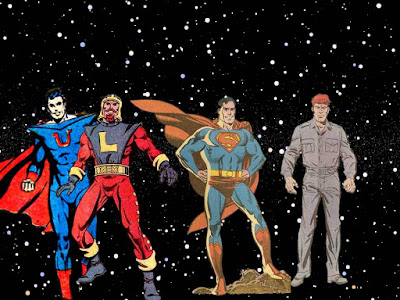 The villains defeated, the heroes each end up dealing with their own version of Lois, with slightly different results.

All the while, awaiting an approaching bigger Crisis On Infinite Earths.....

Posted by Dave's Not Here Comic Blog at 3:47 AM