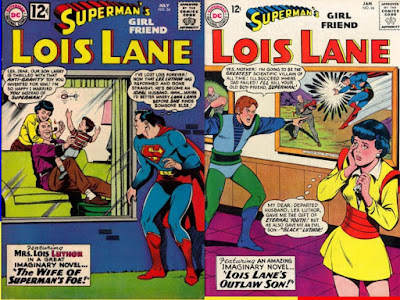 Lois Lane marries Lex Luthor?  Not a dream or a hoax, but an imaginary story!

Yes, circumstances conspire, in a world similar to the regular fictional universe that Superman, Lois and Luthor occupy, yet so different, wherein Lois Lane decides Lex Luthor is a better match for her than the Man of Steel!

The Wife Of Superman's Foe 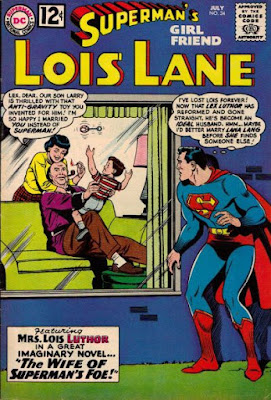 This was explored in Superman's Girlfriend Lois Lane #34 (July, 1962) under a cover by Kurt Schaffenberger, who also drew the Jerry Siegel written story.

Luthor gets free of jail, kidnaps Lois Lane and takes her to another planet....where telepaths there turn him "good", at which point, he brings Lois back to Earth and turns himself in!  Luthor saves the governor's life, getting a pardon, then invents many items to make life easier for the people of Earth.  Then, after Superman fails to save Lois once, Luthor uses science to help her recover....after which she marries him, much to Superman's surprise.  Lex and Lois have a son, Larry, who eventually turns to crime after discovering Lex once fought Superman, and then accidentally kills his own father, with Superman pursuing the now evil lad into space. 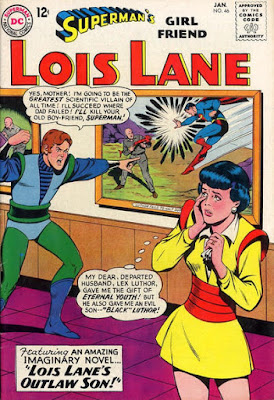 Jerry Siegel and Kurt Schffenberger provide the follow up to the previous story in Superman's Girlfriend Lois Lane #46 (January, 1964).

Larry Luthor, now evil, takes up the name of Black Luthor, while Superman (who had married Lana Lang and given super powers), had their own daughter, and she fights crime as Joan Superman.  Lois, who had been the only recipient of an immortality serum from Lex, is horrified to see that Larry has become an interstellar criminal, but Joan Superman has fallen for him.  Joan tries to reform Larry, with no success, but, after one of Lex's henchmen, Ironclaws, tries to kill Lois, Larry stops him and decides to give up his life of crime.  Larry stops an invasion of Earth, then marries Joan. 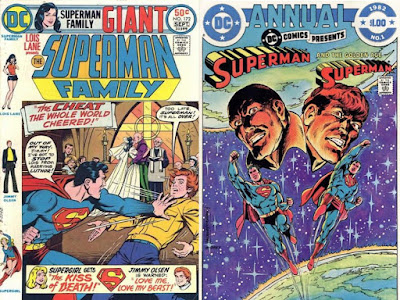 Crazy, right?   But, events transpired in the regular DC Universe, with Lois and Lex getting close once.....and, in an alternate reality, Lois and Lex did get married, and the results of that union were an important part of the Crisis On Infinite Earths!
Posted by Dave's Not Here Comic Blog at 3:33 AM