The Charter Members Of The Doom Patrol 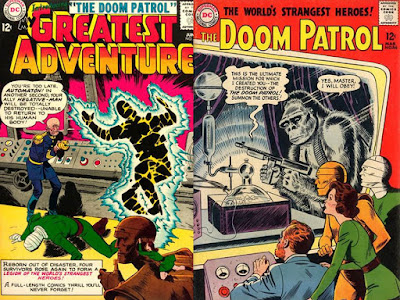 They were misfits, didn't really fit in any where else, and, to top it off, horribly damaged by living their lives...but, the heroes of the Doom Patrol found each other, and learned to work together (staring in My Greatest Adventure #80 of June, 1963 by writers Arnold Drake and Bob Haney, and artist Bruno Premiani), fighting one of their main foes, General Immortus (who also premiered in these pages), with the team taking over the title with Doom Patrol #86 (March, 1964), which featured the introduction of their evil opposites, the Brotherhood of Evil. 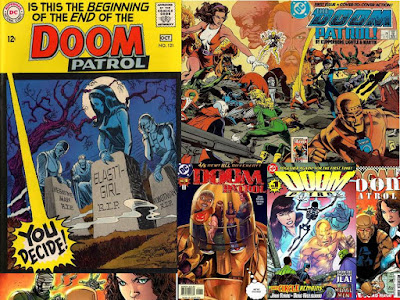 The team continued on, living together and keeping it real, all until Doom Patrol #121 (September-October, 1968), where the original run of the Doom Patrol ended (though their legacy, and eventually all the members lived on....even after their apparent death in that issue's pages).


But, who were these original teammates? 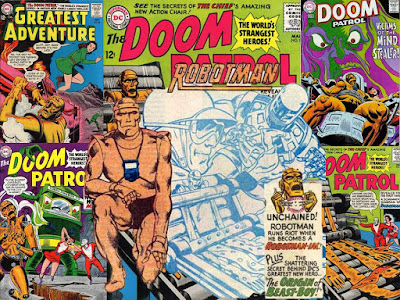 First up is the most recognizable member of the Doom Patrol, as he has been with the most different incarnations of the team, Cliff Steele, also known as Robotman!

Cliff was a race car driver and all around daredevil who took one too many risks, and his history before the Doom Patrol started in a back-up tale in Doom Patrol #100 (December, 1965) by Arnold Drake and Bruno Premiani, called "Robotman -- Wanted Dead Or Alive" subtitled "An Untold Story Of Robotman".  This story dealt with Cliff's crash, and how a surgeon saved his life by transplanting his brain into a robot body, which made Cliff into a "Robotman-iac", sending him on a super-strength, anger fueled rampage through the city, looking for the doctor who did this do him. 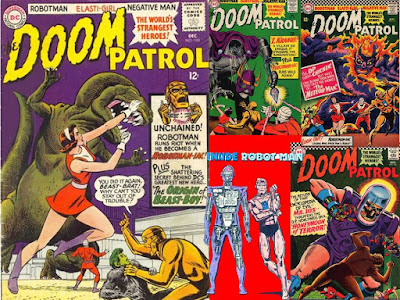 The next chapter was in Doom Patrol #101 (February, 1966) by Drake/Premiani, with "The Lonely Giant", with Cliff getting help from a group of beggars (finding out his brain still needs nutrients, and must get a special formula to keep it alive), and still looking for the doctor and evading police.  In Doom Patrol #103 (May, 1966), by Drake/Premiani, Cliff learns that there is "No Home For A Robot", in trying to help his brother, Randy Steele, and Randy's wife, Helen, against criminals who want to take advanced weapons made where Randy works, then avoids the police with help from the Chief.  The "Robotman Unchained" saga ends with Cliff realizing "The Robot-Maker Must Die" in Doom Patrol #105 (August, 1966) by Drake/Premiani, finding out that the Chief was the one who made him into this "freak", and confronting the doctor.  This cured Cliff of his madness, and the Chief assembled the rest of the original Doom Patrol. 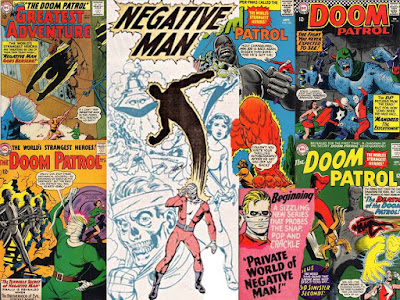 Next Patroler is the Negative Man, and that's not an indication of Larry Trainor's personality (though, he did have reasons to be depressed).

Larry was a test pilot flying experimental planes, with his pre-Doom Patrol days being chronicled starting with Doom Patrol #106 (September, 1966) with "The Private World Of Negative Man" by Arnold Drake and Bruno Premiani, where the pilot flew through a radiation belt at a high altitude, becoming radioactive and gaining the ability to manifest his consciousness as an energy being that can fly for up to sixty seconds at a time.  His radioactivity would have isolated him from all other humans, if not for radiation-proof bandages invented by Dr. Niles Caulder; but the bandages isolate him from others, making him look like a mummy and a "freak". 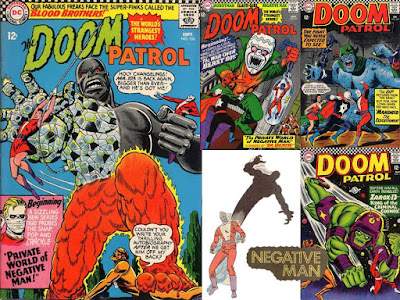 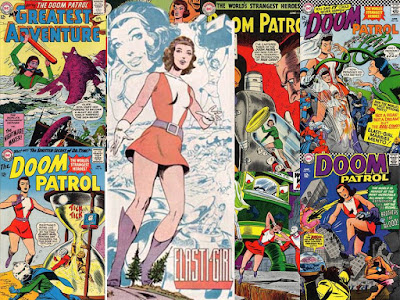 The size-changing Elasti-Girl, whose alter ego was Rita Farr didn't get an individual spotlight like the boys did, but that doesn't mean she didn't have history before the Doom Patrol existed.

Rita Farr was an actress, as well as an Olympic medal winning swimmer, so it's a shame her early days didn't get individual coverage like the other members during the original Doom Patrol run... 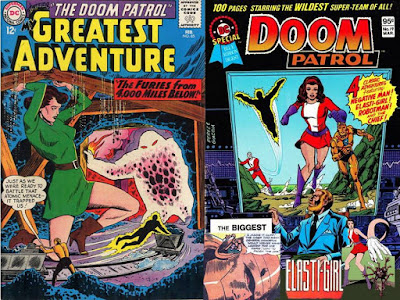 ...but she did have an origin tale, with Rita getting exposed to a volcanic gas in a pool while working on a movie in Africa.  This gave her the ability to shrink and grow (first, without control), labeling the lady a "freak" and messing up her Hollywood career.  Rita is approached by the Chief, offering her a chance to do good with her powers, and join the Doom Patrol, as seen in Doom Patrol #105 and #111, and starting with My Greatest Adventure #80. 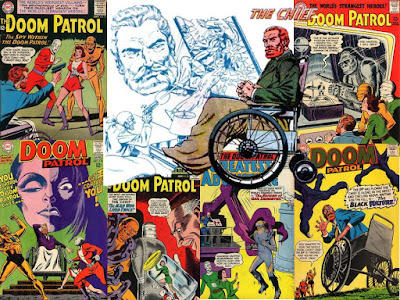 The oddest member of the Doom Patrol was their leader, wheelchair bound Dr. Niles Caulder.

Niles was involved in the origins of all the previous members, but his origin was what created the need for the team, as revealed in Doom Patrol #88 (June, 1964). 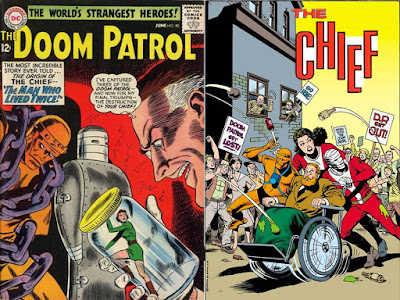 Niles Caulder was a young scientist looking to prolong life, not knowing he was working for the evil General Immortus, who needed more of a longevity serum to stay alive.  Worse still, the general had implanted a bomb in Niles' chest, that only Immortus could remove.  When Niles learned the nearly immortal madman was in charge of his research, he destroyed that work, using his own trusted robot assistant (RA-2) to "kill" him, allowing the robot to operate safely and remove the bomb (though Niles was under too long, and lost the use of his legs).  Revived without the bomb,  Niles even had to destroy RA-2, and fled General Immortus.  To combat the evil of General Immortus and others, Niles fashioned his secret identity as the Chief and gathered others damaged by society to go out and combat evil. The Doom Patrol also worked with other heroes introduced in their own pages, like Beast Boy and Mento.  The team lasted until Doom Patrol #121 (September-October, 1968), where they appeared to perish, but eventually came back, starting with Showcase #94 (August-September, 1977), adding new members Negative Woman, Tempest and Celsius, and as time passed, even more members joined (and more originals returned) as time went by.  But one thing remained consistent...the lesson of the Doom Patrol was that everyone has something to contribute, and to just keep trying.  Better to try and fail than to do nothing at all....
Posted by Dave's Not Here Comic Blog at 3:19 AM