The Hero, the Warrior and the Doctor 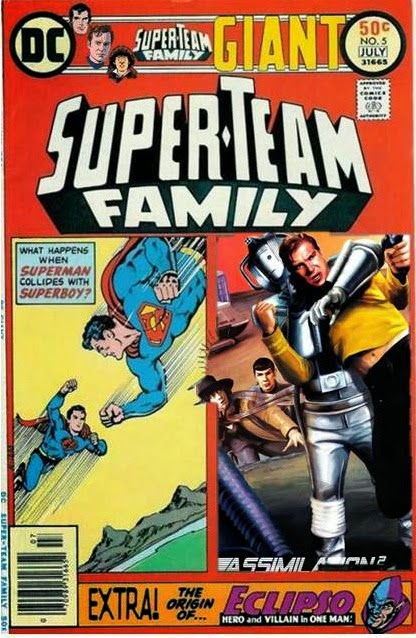 Last week, the heroes were time travelers on screen (TV and the movies), and here...


...it's  time to look at a few of the time travels of Superman, Captain Kirk of the starship Enterprise on Star Trek and the Doctor of Doctor Who in the comics!


It's quite the wild ride, as characters met themselves over the years, crossing over generations...


...and it might even be as interesting as the cover mock-up of Super-Team Family provided! 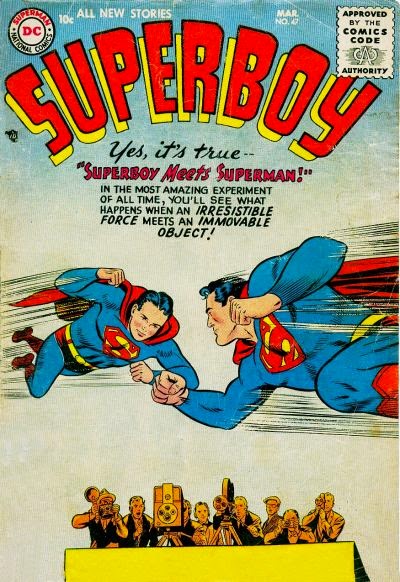 Superboy met his future self, (the Man of Steel, Superman) in Superboy #47 (March, 1956), in a little story by Otto Binder, drawn by Curt Swan.

Superboy accidently landed in the future, met Lois Lane and his future self (because, these early adventures of Superboy weren't those of a clone, they were of Superman, when he was a boy).  The two were stuck in one time, and had to put their heads together (sorry for the pun) to figure out how to separate themselves. 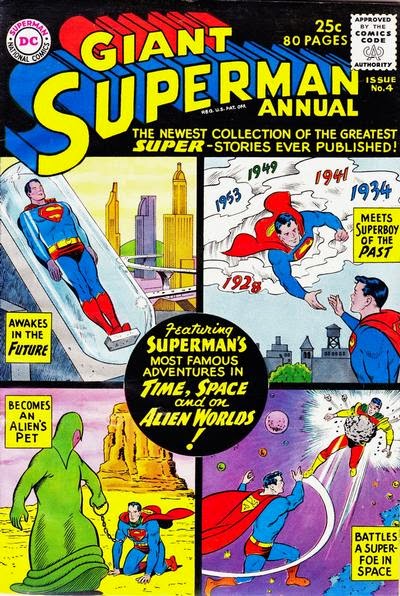 This story was also reprinted in Super-Team Family #5 of 1976 (which had a slightly different cover in the day) and in Superman Annual #4 of 1961, which also featured a few Superman time-travel tales!

There were even Superman meetings over in Smallville, where Tom Welling (as Clark Kent) met previous actors who played Superman (Christopher Reeve as Dr. Virgil Swann, and Dean Cain as Dr. Curtis Knox), so the Supermen didn't quite meet each other as Superman (at least in the "real world"), but close.... 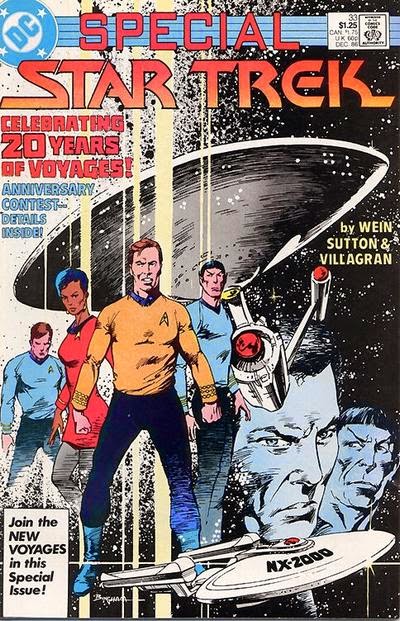 Before Kirk and Picard met in the 7th Star Trek movie, Captain Kirk came across his younger self in a 20th Anniversary Star Trek tale from Star Trek #33 (December, 1986) by writer Len Wein and artist Tom Sutton (and a stunning cover by Jerry Bingham) for the story "Vicious Circle".

This story had the crew of the Enterprise-A (between Star Trek III: The Search For Spock and Star Trek IV: the Voyage Home) meet with the TV series crew from Star Trek's first season (including Yeoman Rand and Nurse Chapel, and not Pavel Chekov, who wasn't added to the crew until the TV shows second season).  It also showed the value in getting the complete Star Trek franchise (as the 18 issues of the original Marvel Star Trek run only had rights to likenesses and concepts of Star Trek: The Motion Picture). 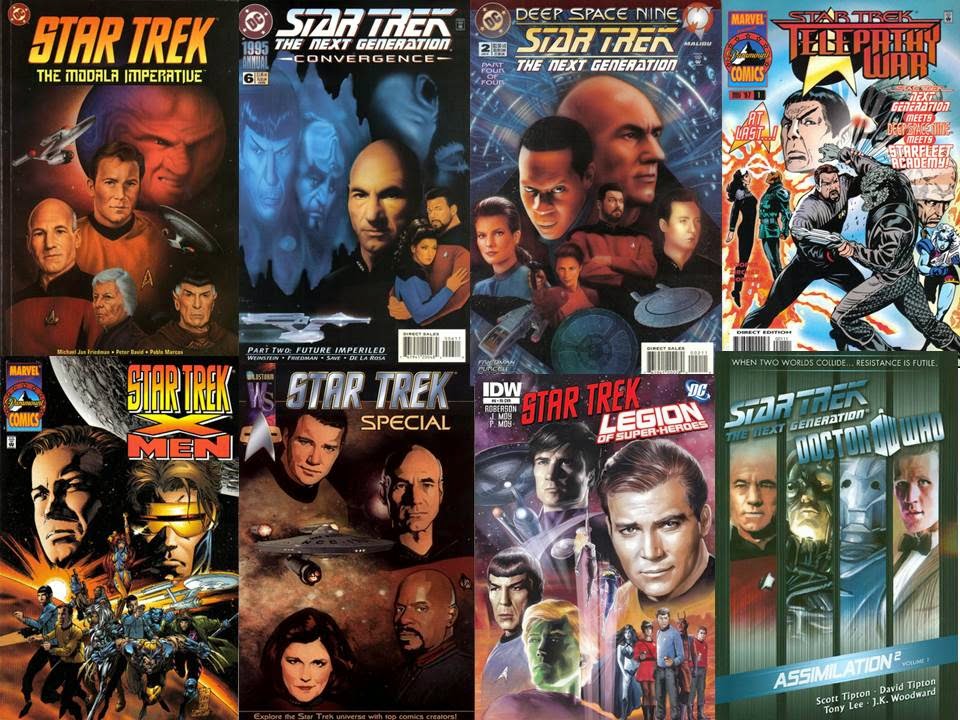 A fun little story, and a chance to see how the Star Trek franchise had grown in 20 years (and this before Star Trek: The Next Generation, Star Trek: Deep Space Nine, Star Trek: Voyager, Star Trek: Enterprise...

...and even the most recent two Star Trek movies that rebooted Kirk, Spock and the rest of his loyal crew!).

Later comics had the various crews meet, and they even branched out and met other licensed characters...like one of the most frequent time travelers of them all! 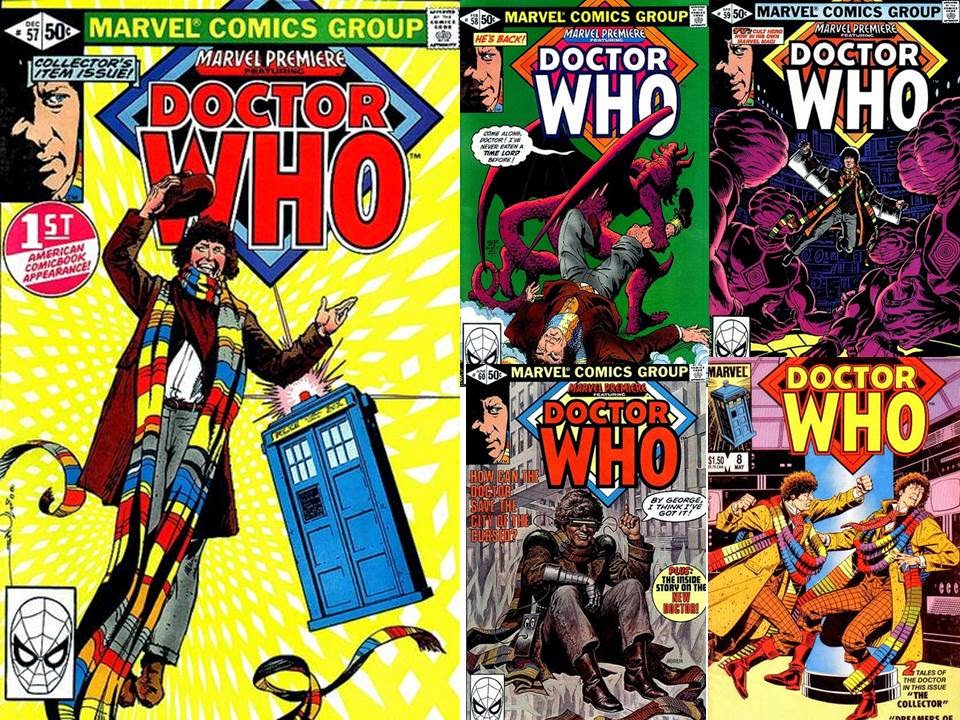 Still, it took quite some time for the Doctor of Doctor Who to make it to American comics...and even then, they were reprints of issues from British comics from Marvel UK's Doctor Who Weekly featuring the 4th Doctor (Tom Baker)...at least to start in 4 issues of Marvel Premiere (#57-60, 1980-1981), and then 23 issues starting in 1984 (that featured reprints of Marvel UK stories with the 4th and 5th Doctor, Peter Davison....). 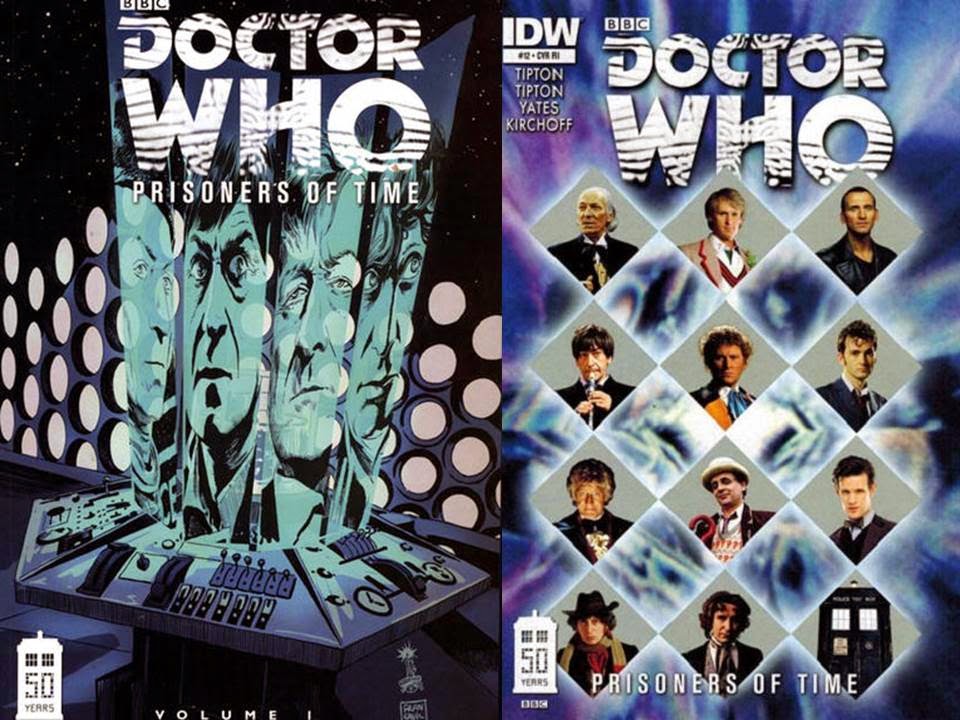 Still, IDW finally took advantage of the unlimited access comics provide to time and space with a 12 issue mini-series entitled Doctor Who: Prisoners of Time!

Over the course of these twelve issues, the Doctor's companions were disappearing (as seen starting with the first Doctor in issue #1, the second Doctor in issue #2, and so on), until all 11 Doctors gathered to solve the problem and find which companion was behind this in the 12th issue, as each Doctor appeared once a month all over 2013, all written by Scott and David Tipton and a variety of artists!

The story has been collected in 3 volume tradepaperbacks (the first four Doctors in Volume 1, the second four in Volume 2, and the ninth through the eleventh and resolution in Volume 3), or get it all in one large oversized hardback all from IDW!

Still, here we are with the newest Doctor (Peter Capaldi), and I bet he's feeling left out after his renewal...
Posted by Dave's Not Here Comic Blog at 6:30 AM