It all started with a couple of hippies, trying to get dry in  a clothing store…and what a long, strange trip it has been! 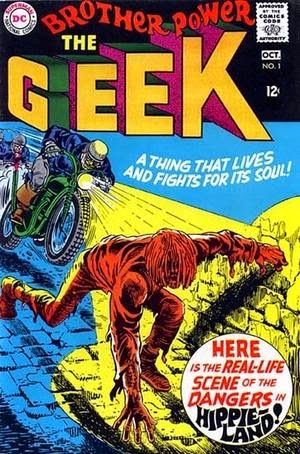 Well…a long time anyway.  Brother Power, the Geek first manifested in Brother Power, the Geek #1 (September-October 1968) by Joe Simon and (the uncredited artist) Al Bare.  This mannequin came to life after being clothed in bloody clothes from one of the flower children (Nick Cranston and Paul Cymbalist) who had sought shelter in the store and being struck by lightning.  He then got facial features from Cindy, a groovy chick they met along the way, escaped the evil biker gang Hound Dog and his Mongrels and tried to find their way in the world (including a run for Congress!). 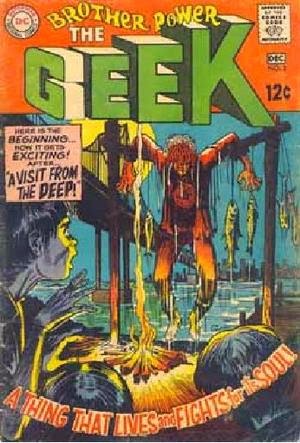 In his second issue, Brother Power tried to find a job, and ran up against problems in the capitalist world, specifically the Lord Sliderule, but still made everything run more efficiently.

Still, Brother Power was launched into space in his second issue (November-December 1968) by the governor of California (not mentioned, but definitely Ronald Reagan)….and, that third issue, though supposedly completed by Joe Simon, never saw the light of day (by Joe’s design, sadly, as he refused to discuss the character in later days). 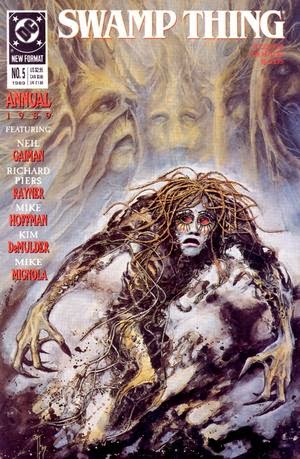 Still, all was not lost…as that satellite eventually came down, in Swamp Thing Annual #5 (1989), where writer Neil Gaiman and artists Richard Piers Rayner, Mike Hoffman and Kim DeMulder brought this icon of the 1960s crashing into modern times.

This story revealed that Brother Power was a failed attempt at an Earth Elemental, and the story featured Batman, Firestorm (himself revealed to be a Fire Elemental…that was the trend of the 1980s/1990s), and Abby Arcane (Swamp Thing’s girlfriend), who, along with sixties reject Chester and his girlfriend, Liz Tremayne, tried to help Brother Power adjust to a time not his own (a possible throwback to Joe Simon’s Captain America…himself a reminder of World War II, asked to wake up in the “modern day”). 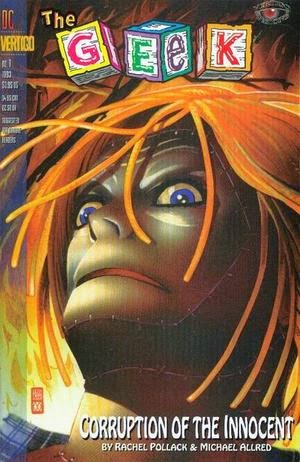 Things got worse for Brother Power, having to endure the corruption of the innocent in Vertigo Visions: The Geek #1 (June 1993) by Rachel Pollack and Michael Allred…with more battles against the powers that be, and a not particularly pleasing reintroduction to Cindy, who had fallen on hard times from the days of free love.

Still, the mannequin survived and continued to fight on…even briefly appearing in the meeting of all the Vertigo characters of the time, like Swamp Thing, John Constantine, the Doom Patrol, Black Orchid, Animal Man and Shade the Changing Man, in Totems (February 2000) by Tom Peyer, Duncan Fegredo and Richard Case. 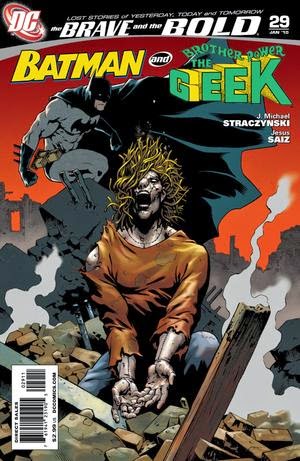 Brother Power made one last appearance, this time in Gotham City.  With Brave and the Bold #29 (January, 2010), J. Michael Straczynski and Jesus Saiz brought the master of flower power into a meeting with the dark knight of the city, slightly changing the origins of the mobile mannequin by basing him in Gotham instead of the west coast, and bringing Cindy out here to work at a clinic, helping people.  The two heroes  eventually worked together, and Brother Power ended the issue wandering off in the sewers…with Batman hoping he’ll find his way closer to home.

(And, in his next comic appearance, in the animated Brave & the Bold #15 (May, 2010, by Sholly Fisch and Robert Pope), he was treated a little better…though this appearance was tied more to the animated TV series than the comic continuity, and he didn’t appear on the cover).

Still, with the New 52, you never know when you could see the “Thing That Lives And Fights For It’s Soul!”.
Posted by Dave's Not Here Comic Blog at 7:11 AM