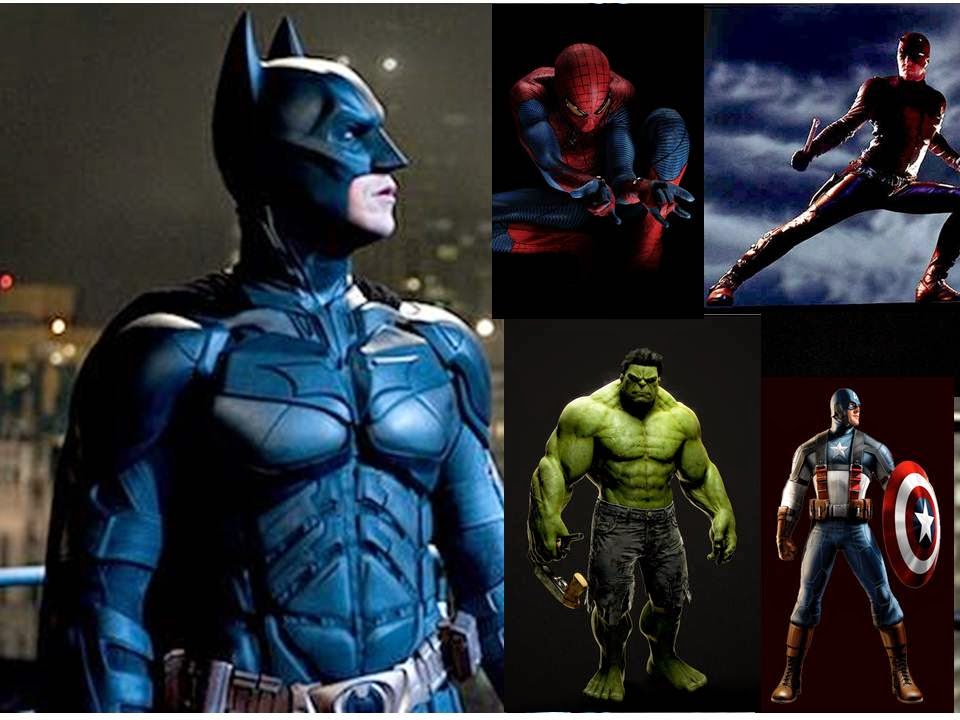 One of the questions I heard at the Avengers premiere was…”Where’s Batman?”.

Now, most comic fans know that Spider-Man lives in the Marvel Universe as published by Marvel Comics, and Batman in the DC Universe published by DC Comics.

Now, with this past week’s column, we showed the movie split as to why the Amazing Spider-Man wouldn’t be in Avengers’ movies, and yes, Batman won’t be in any of them, either.


Still, wouldn’t Batman teaming up with any of the modern Marvel movie stars be an incredible, amazing thing?

But, that doesn’t mean these two recent movie stars haven’t crossed paths….as evidenced by these comics!  Starting off with a couple of meetings with Spider-Man… 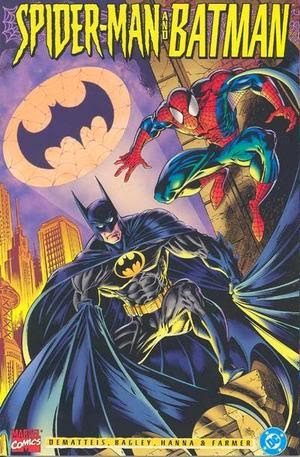 In this issue, they faced off against two of their crazier foes with “Disordered Minds”, Carnage for Spider-Man, and Joker for the Batman.  A nice little team-up, but a little lacking in real substance, as Carnage was just a little too new of a character to match up well with the Joker (though they matched well by both being crazy!  In fact, it was attempting to cure the Joker and Carnage that got them to team-up.  I don’t think it is a spoiler to say it didn’t work out so well…). 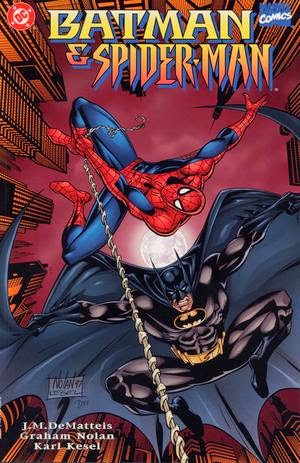 Still, the next time the Dark Knight and Amazing Webslinger met up was in Batman & Spider-Man #1 (October 1997), it was with some older and weightier foes…specifically, the master of the League of Assassins, Ra’s Al Ghul, and king of crime, the Kingpin.

This story was also written by J.M. DeMatteis, with artist Graham Nolan.  Kingpin and Ra’s Al Ghul are the drivers of the plot here, both manipulating as only they can, and even involve the women in their life, Kingpin’s ever-ailing wife, Vanessa and Ra’s daughter and sometime co-conspirator (as well as romantic distraction for the Detective), Talia.

All of this led to a stronger team-up, and they end up as allies to save the world from one of Ra’s plans to end it all with a “New Age Dawning”!  All this, and a little more Batman/Spider-Man interaction as well.

But, the battle isn’t over for the the dark knight detective…no, he has more marvelous journeys to follow…

Meeting The Man Without Fear 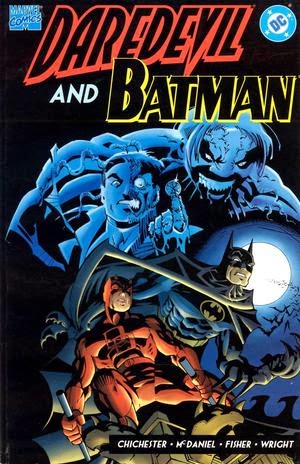 After meeting with the wall-crawler the first time, Batman also met with another creature of the night…Daredevil, the Man Without Fear!


Batman met up with Spider-Man’s fellow New Yorker, Daredevil for a few team-ups as well.  First time around was in Daredevil and Batman #1 (January 1997) in a story by D. G. Chichester, and art by Scott McDaniel.

Batman chases his foe, Two-Face, and DD’s foe, Mr. Hyde, to New York…and of course, the two crimefighters face off as well.  Most annoying thing…is that Two-Face is upset to be in the first meeting of these two urban crimefighters, so upset, he wants “An Eye For An Eye”!  Seems more than Batman’s life hangs by the flip of a coin… 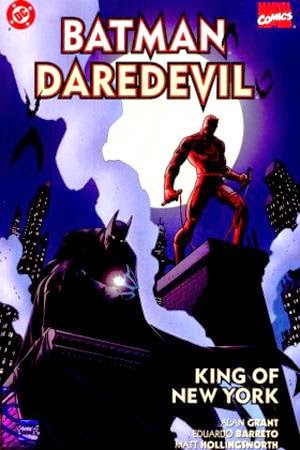 Still, the second time around was a little more involved (and familiar as well!).  In December, 2000′s Batman Daredevil: King of New York #1 (by Alan Grant and Eduardo Barreto), the two heroes face off against Batman foe, the Scarecrow and Daredevil’s foe, Kingpin (who seems to like working the DC side of the street, it appears!  Seems Mr. Fisk might prefer Gotham City to New York City…or, maybe not).

Kingpin seemed to learn a little about manipulation from Ra’s Al Ghul, as he also used the feline Catwoman to distract Batman.  And, how would the Man Without Fear fare against fear gas?  Hey, it means Daredevil will get a trip to Batman’s Batcave, at least!  And, the second team-up, Batman and Daredevil interact a little more on a personal level…


Not only did Batman meet Spider-Man and Daredevil, but he encountered a slightly more violent villain, the Punisher as well. 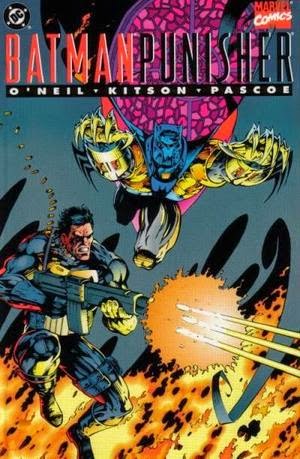 In Batman/Punisher: Lake of Fire #1  (cover dated June 1994, by Denny O’Neil and Barry Kitson),  it’s Jean-Paul Valley, not Bruce Wayne, as the Batman (Jean-Paul was a substitute for Bruce, who had been injured by Bane…yes, the villain in the current Batman film), versus Batman foe, the Joker and Punisher’s main menace, the Jigsaw.

This was the first DC/Marvel team-up since they stopped after the Uncanny X-Men and New Teen Titans team-up of 1982 due to difficulties that had arisen between Marvel Comics and DC Comics while working on the original Justice League of America and Avengers first meeting (that only took place decades later…).  And, the title characters battled first, before working together against their common foes. 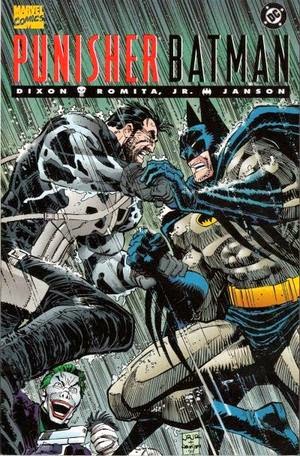 This worked so well that it had a follow up within the same year, with the Punisher/Batman: Deadly Knights #1 (cover dated October 1994, with regular Detective Comics and Robin writer at the time of Chuck Dixon and the amazing John Romita Jr. was doing the art).


No new villains, as it was still a battle against the Joker and Jigsaw (why mess with a good team, right?  Still, new villains usually spice up the mix a little), but it was the more familiar Batman at this point, dealing with the ultra-violent, gun-toting Frank Castle as the Punisher.

And, the more by-the-book Batman had more trouble with the Punisher and his use of guns on criminals as well….


After all that grief, dealing with a hero who acts more like a villain, Batman got a break, working with the star-spangled Avenger, Captain America.

War With The Star-Spangled Avenger 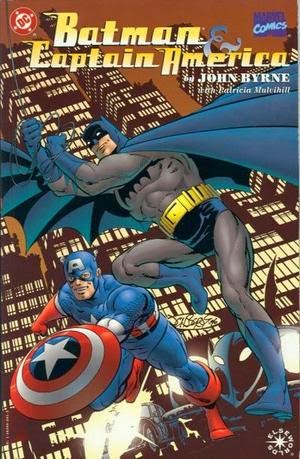 With the release of Batman and Captain America #1 in December 1996 by John Byrne, this would be a more light-hearted team-up (and one that took more advantage of a possible shared DC and Marvel Universe, where familiar storyline would play out over generations, as this Batman & Robin met Captain America & Bucky and battled the Joker and Red Skull in World War II!  This was also considered an “Elseworlds” tale by DC Comics (where things happen that wouldn’t normally happen in a DC Comics, such as Batman being around during World War II, kind of like Marvel’s “What If?”, which is their version of odd stories playing out).

Things played out for Captain America at the end of the war as they have before…but, slightly differently!

A sequel to this would have been very appreciated, but it was not to be.

Still, one of the best team-ups Batman had with a Marvel character, was his very first, and that happened when Bruce Wayne’s alter ego crossed paths with a certain gamma-irradiated scientist, the Hulk. 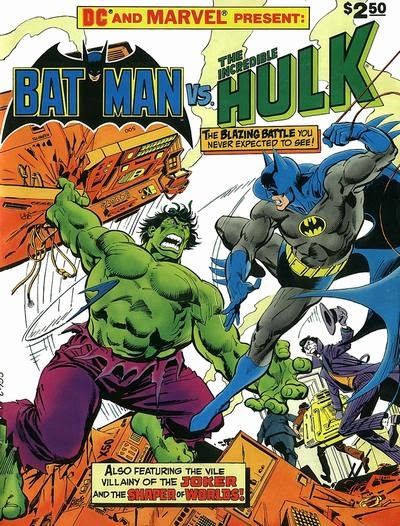 In DC Special Series #27, (September 1981, by writer Len Wein who had worked on both Batman and the Hulk’s titles in the past) and incredible DC artist Jose Luis Garcia Lopez), Bruce Banner ends up looking for a cure for the Hulk at Waynetech, which insures a run in with Batman.  Of course, the Joker steps in to steal the device needed (as the Hulk’s foe, the Shaper of the Worlds needs it to survive, and Joker made a deal with the Shaper if the Joker could deliver the device, which the Joker did…and, in return, the Shaper grants the Joker the ability to reshape reality!  Would that that new reality had more team-ups with Batman and Marvel’s characters in it!).  The last of the oversized DC/Marvel team-ups, and certainly one of Batman’s best! 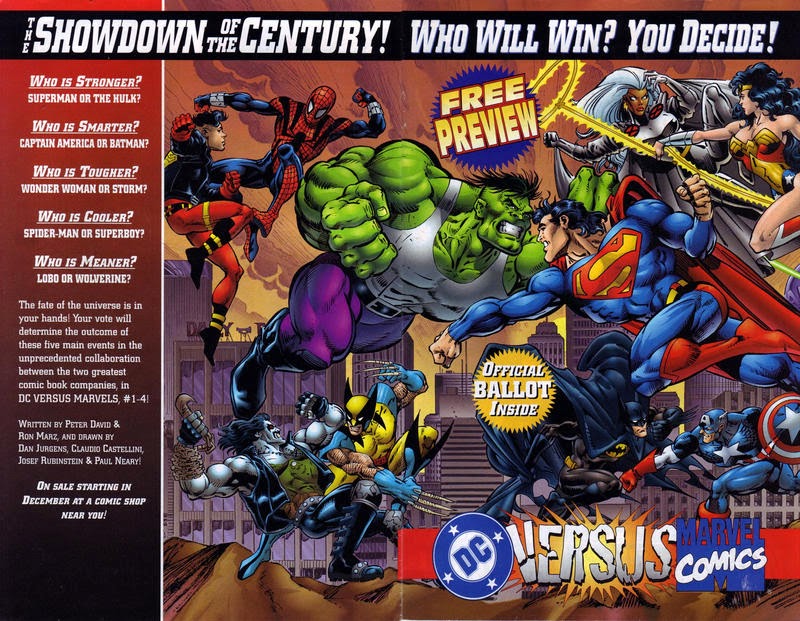 And, of course, Batman fought the whole Marvel Universe (which, as you can see also included the X-Men, as well as a few of Batman’s more regular Justice League and Titans friends) in DC Vs. Marvel #1-4, which led to a few more DC/Marvel all-inclusive team-ups as well with Access, the Marvel and DC character that would allow DC and Marvel characters to meet at any time as that was his power!  All these characters meeting…it’s like Mego time for Batman and Spider-Man!


But that’s a tale for another time!
Posted by Dave's Not Here Comic Blog at 7:27 AM