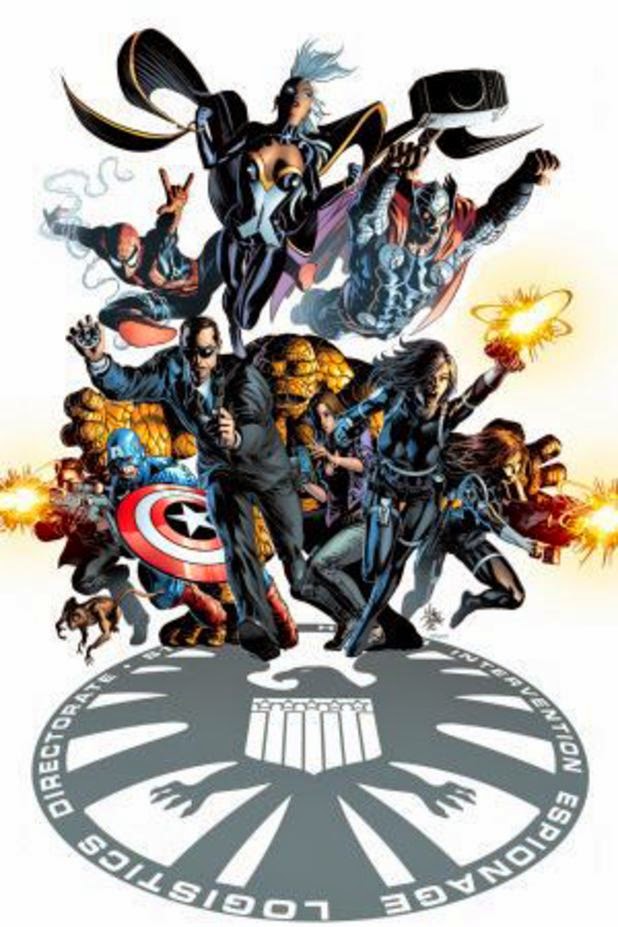 In December, 2014, Marvel plans on putting out a comic book on the Agents of S.H.I.E.L.D. TV series.

It's a comic based on the TV show, and plans to have Agent Coulson and his team working in the current comic universe, introducing Melinda May, Leo Fitz and Jemma Simmons into the Marvel Universe (as opposed to the Marvel Cinematic Universe) in a series of stories by Mark Waid (and first issue containing art by Carlos Pacheco and later issues by Chris Sprouse and Alan Davis).  CBR interviewed Mark Waid, and he discussed his plans for Phil Coulson and crew here. 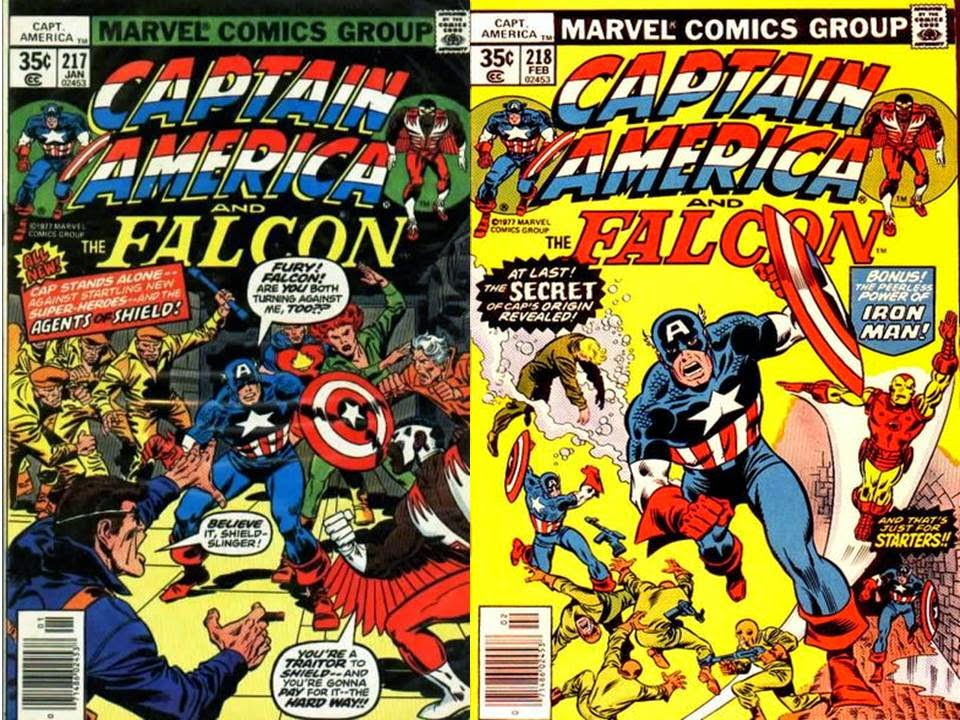 For that, look no further than Captain America #217-218 (January-February, 1978) in stories by writers Roy Thomas, Don Glut, and artists John and Sal Buscema, wherein we are introduced to the new Super-Agents of S.H.I.E.L.D....the Falcon, the Texas Twister, Blue Streak, the Vamp and Marvel Boy!

Like S.H.I.E.L.D. (whose history is touched on here along with their villainous counterpart, Hydra), these characters have connections all over the Marvel Universe (the Falcon, Cap's frequent partner, to get more coverage under the Avengers). 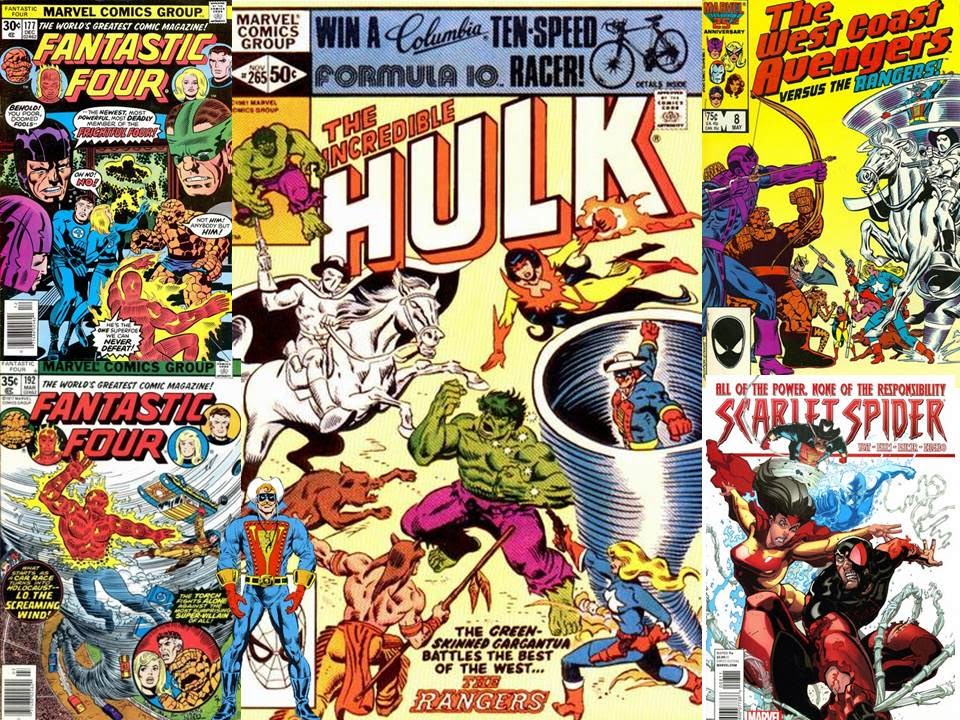 Drew Daniels first appeared as the Texas Twister in Fantastic Four #177 (December, 1976) in a story by Roy Thomas and George Perez, wherein he tried to join the Frightful Four (villainous counterpart to the Fantastic Four) who, at the time were short a member.  Not really a villain by nature (and needing to be paid), Drew then ended up using his tornado powers to disrupt a race the Human Torch was in, and then did join the new Super-Agents of S.H.I.E.L.D....planning on using his powers for good.  A later run of Captain America issues saw the end of the Super-Agents...and Texas Twister became a founder of the Rangers (along with the western Ghost Rider aka Night Rider aka Phantom Rider, Red Wolf, Firebird and Shooting Star) in Incredible Hulk #265 (November, 1981), and continued with them over the years, being a part of the Contest of Champions, working with the West Coast Avengers, being a part of the Civil War and even working with the Scarlet Spider!  Not bad for a cowpoke who got his powers being too close to a nuclear power plant and a tornado!

The Vamp and the Blue Streak 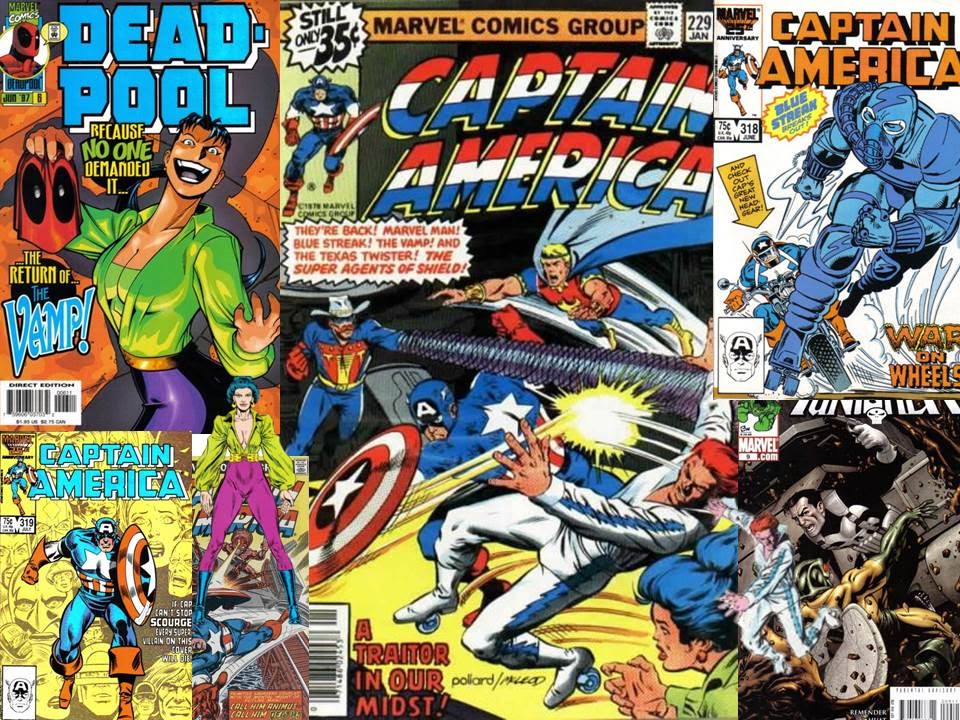 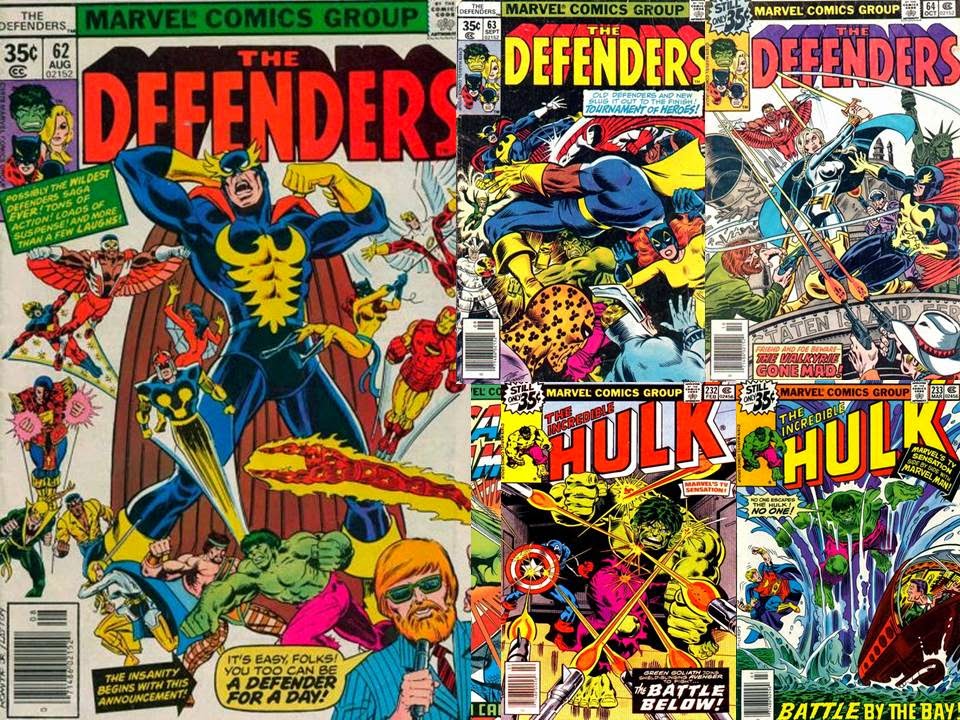 Wendell Elvis Vaughn was a guard at a Stark International facility testing the Quantum Bands of the Crusader (Thelius, who pretended to be the original Marvel Boy), and, in an invasion by A.I.M. (Advanced Idea Mechanics), put them on to stop the villainous group...and himself became Marvel Boy (later Marvel Man) and ended up in the S.H.I.E.L.D. Super-Agent program.  Between Captain America #218 and #228, he and Falcon participated in the "Defenders for a Day" event, wherein many heroes (and even villains) joined the Defenders for a time (Defenders #62-64, 1978), although they weren't considered real Defenders like Hulk, Nighthawk, Valkyrie and Hellcat.  With the end of the S.H.I.E.L.D. Super-Agents, Marvel Man stuck around the Hulk until Incredible Hulk #234 (April, 1979, by Roger Stern and Sal Buscema), wherein Wendell took the name of Quasar, and headed to his next assignment... 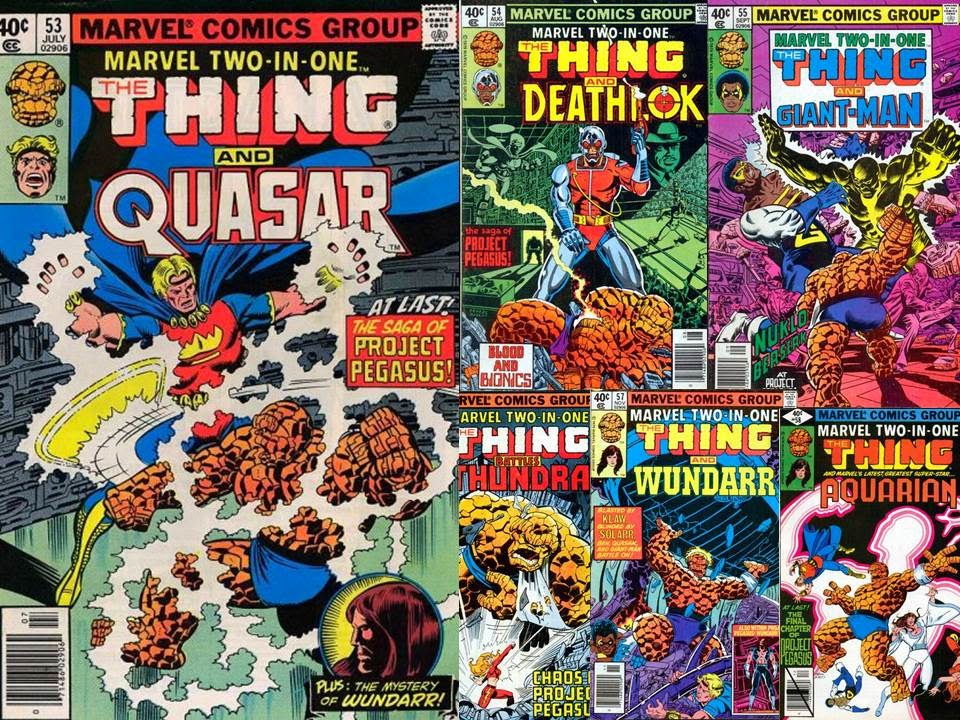 ...working at Project: Pegasus as and becoming their head of security.  Project: Pegasus (Potential Energy Group/Alternate Sources/United States) was a base in the Adirondack Mountains of New York that studies alien and super weapons (like the Cosmic Cube) and people (like Nuklo), serving as a prison for some villains too dangerous to be near other people.  The Thing ended up there, checking on Wundarr (an alien from another world here to spread hope who became Aquarian), and ended up involved with Giant-Man (the former Black Goliath/Bill Foster), Thundra (a reformed member of the Frightful Four, a super-strong amazon from a future society) and Deathlok (a futuristic cyborg from another timeline...well, more or less...and someone familiar to Agents of S.H.I.E.L.D. viewers) in a plot by the Nth Man (a foe of the Thing's from previous issues of Marvel Two-In-One) in the Project: Pegasus saga (in Marvel Two-In-One #53-58, 1979, collected in the Thing: Project Pegasus in 2010) by Mark Gruenwald, Ralph Macchio, John Byrne, Joe Sinnott, George Perez and Gene Day. 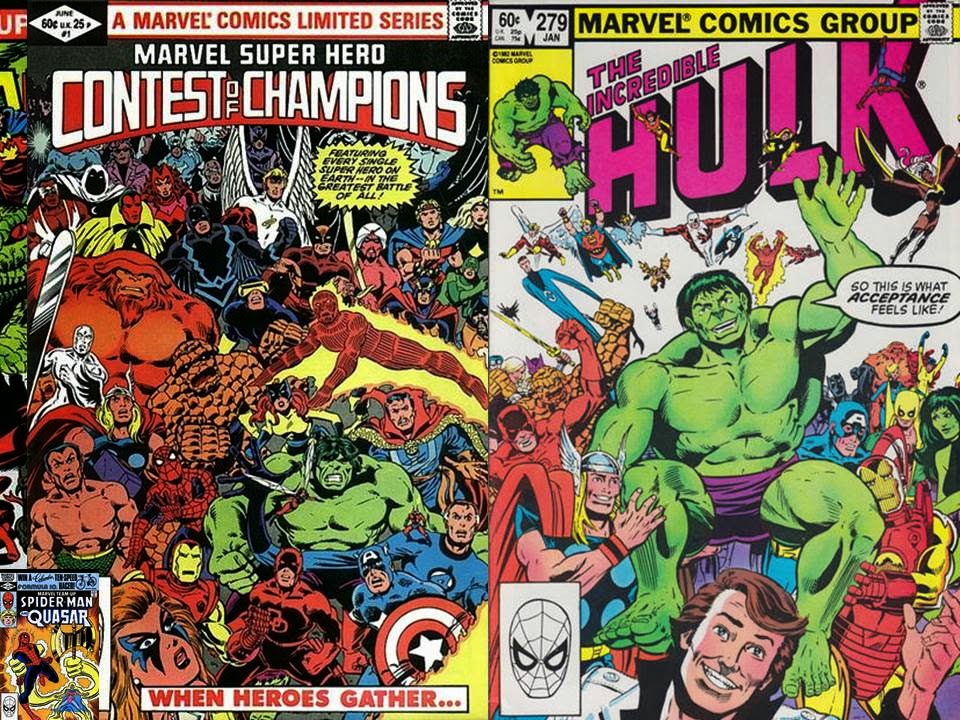 Quasar then guested across the Marvel Universe for a time, participating in the Contest of Champions, and being there for the pardon of the Hulk, as well as working with Spider-Man, Dazzler and the Thing....then becoming an Avenger and getting his own title that lasted 60 issues and explored the secrets of the Marvel Universe (actually, the Marvel Multiverse, as it went beyond the galaxy and even explored other dimensions, and cleared up a lot of little continuity oddities along the way). 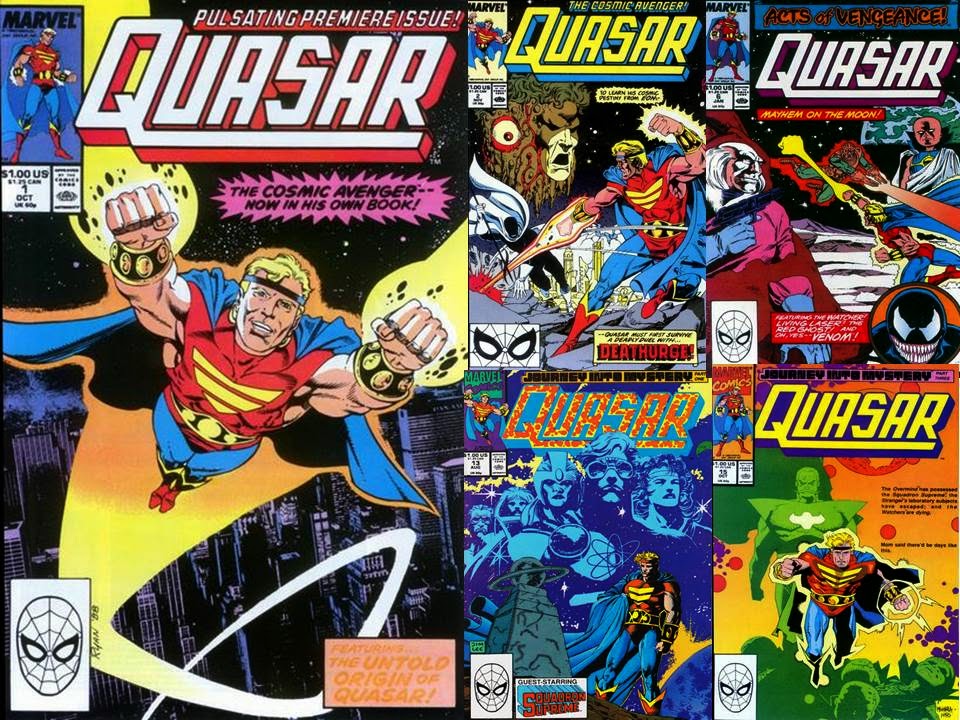 Mark Gruenwald and Paul Ryan gave us the story of how Wendell got the Quantum-Bands in Quasar #1 (October, 1989), and had Eon make Quasar the Protector of the Universe in Quasar #2 (November, 1989).

From there, using his powers of flight, strength and energy manipulation granted by the bands, Quasar kept going until Quasar #60 (July, 1994), with Mark Gruenwald writing almost all the issues, and having Quasar meet with or fight a vast array of the Marvel Universe... 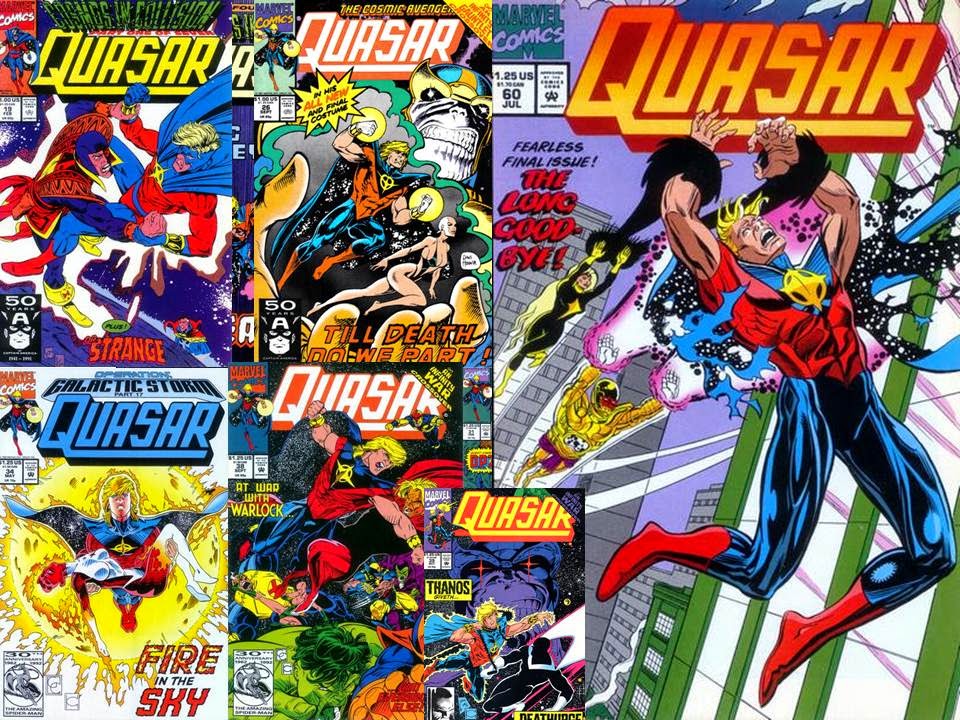 ...including Deathurge, the Human Torch, Quantum, Aquarian, Absorbing Man, Living Laser, Red Ghost, the Watcher, Terminus, the cosmic Spider-Man, MODAM, the Kree Dr. Minerva and Captain Atlas, Halflife, the Excalibur team including Phoenix, the Eternals, Moondragon, the Squadron Supreme, Over-Mind, the Stranger, Rocket Raccoon, Runner, Captain Marvel (Monica Rambeau), the Jack of Hearts, Maelstrom, Woodgod, Dr. Strange, Thanos, Her, Adam Warlock, Nova, Drax the Destroyer, Gamora, the Imperial Guard, Binary (the former Ms. Marvel/Carol Danvers), Eternity, the Punisher, the Antibody, Blue Shield, Blue Marvel, Thunderstrike, Black Bolt, the Presence and Darkstar, and participate in the Acts of Vengeance, the Infinity Gauntlet, Galactic Storm, the Infinity War and Starblast, and even work with D.P. 7 and get the Star Brand from the New Universe, and even getting a few new costumes along the way. 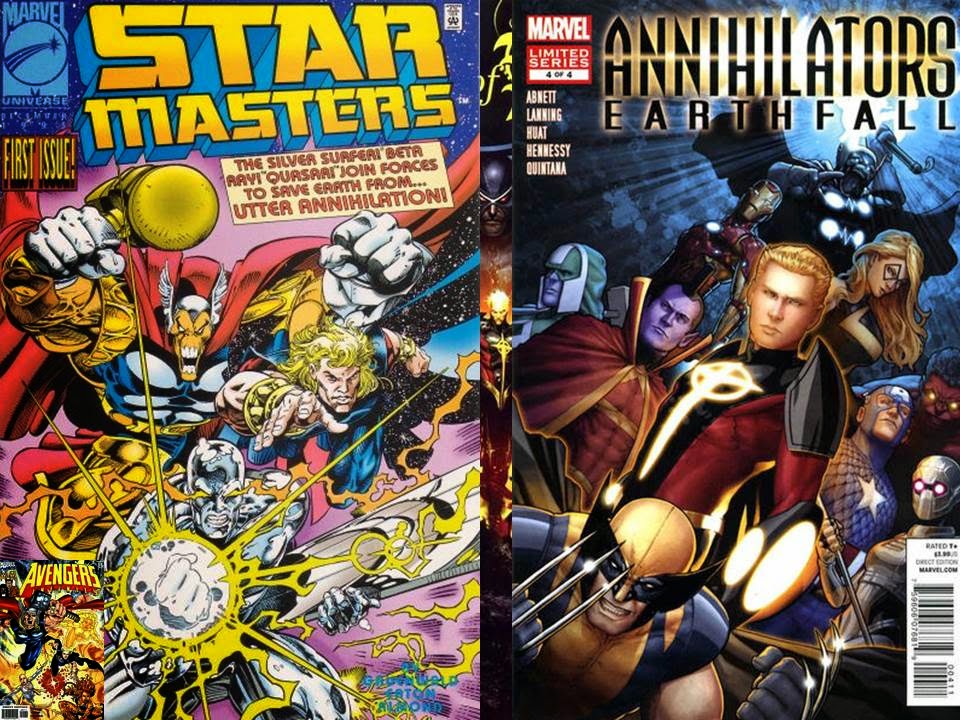 Later on, he works with Silver Surfer and Beta Ray Bill in Star Masters, Thor, Photon (former Captain Marvel Monica Rambeau), Tigra, Starfox, Moondragon, and Jack of Hearts in Avengers: Infinity, and even Nova, Captain America, Gladiator, Wolverine, Ronan and the Guardians of the Galaxy in Realm of Kings!  Don't worry if you don't know all those names....as you haven't seen most of them in any Marvel movies as of yet, but all of this shows how big and cosmic things can get, even dealing with the Earthbound Agents of S.H.I.E.L.D.!