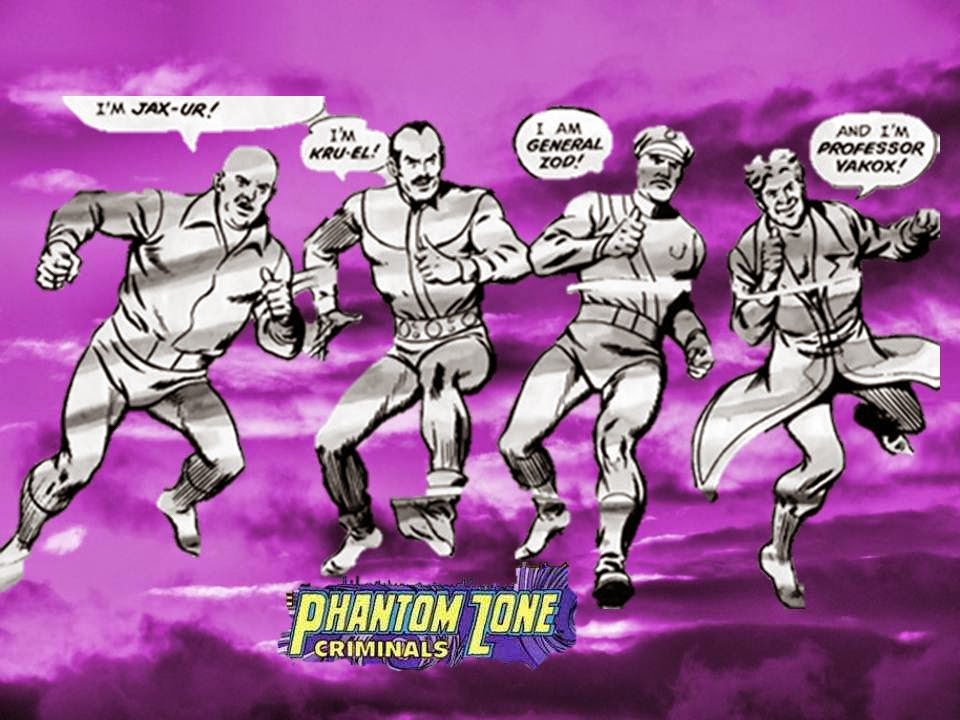 The Phantom Zone was home to Krypton’s greatest criminals, and, oddly, they survived Krypton’s destruction by being sent there.  They also broke free on occasion, and ended up menacing Superboy, Supergirl, Superman, and all of Earth!

Origin of the Phantom Zone

The Phantom Zone first appeared in Adventure Comics #283 (April, 1961 by writer Robert Bernstein and artist George Papp),  when Superboy found a cache of Kryptonian weapons on Earth, and with them, the Phantom Zone projector, which he accidentally triggered and trapped himself in the zone, able to see all, but touch or talk to no one (except the prisoners, via telepathy).  Luckily, young Kal-El was able to get a message to his Earth father, Jonathan Kent, and got free from the zone.
But, this opened a Pandora’s Box of problems, as the criminals were now aware of Earth, Superboy and would work tirelessly to get themselves free and subjugate the Earth, and the son of Jor-El, the scientist who found the zone, and put most of them there.

A few of those prisoners Superboy saw in that first appearance were Dr. Xadu (a scientist sent to the Zone for conducting forbidden experiments in suspended animation which resulted in the deaths of his patients, and his wife, Erndine Ze-Da, was later sent there as well, and the pair menaces Superboy and Superman at different times), but the most important prisoner was General Zod.

Zod In the Zone

Dru-Zod was a general in the Kryptonian army, and after the explosion of Wegthor (a moon of Krypton) ending Krypton’s space program, Zod attempted a coup of Kryptonian Council, using an army of imperfect duplicates of himself.  Zod was stopped, the duplicates destroyed, and that crime got him sentenced to the Phantom Zone.  While in the Phantom Zone, Zod learned of Earth, and of the son of his jailer(Kal-El, aka Superboy, the son of Jor-El), and plotted to get free of the zone (and torment all of the house of El), starting with Superboy, then Supergirl, and finally Superman.  Zod even led the Phantom Zone criminals against Green Lantern Hal Jordan, who had stumbled into the Phantom Zone trying to free Guy Gardner…which led Zod to have a knowledge of the Green Lantern power battery (and the trouble that would cause….). 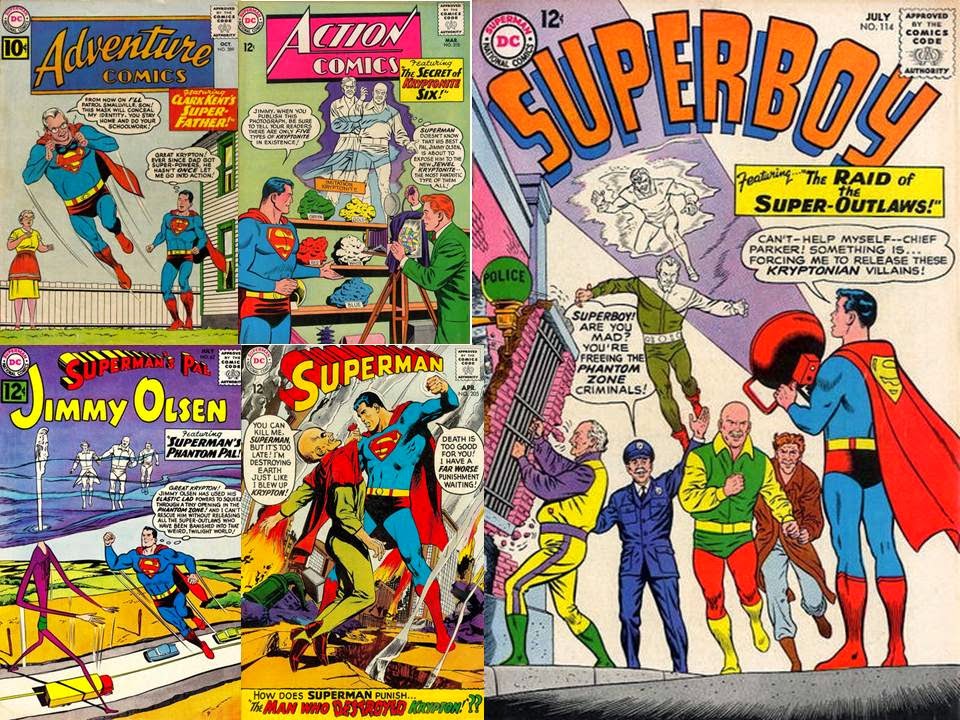 Another prisoner was the worst of the bunch, scientist Jax-Ur, who premiered in Adventure Comics #289 (October, 1961, by writer Otto Binder and artist George Papp).  Jax-Ur worked with Jor-El on Krypton, pushing the Kryptonian space program forward, and made a nuclear missile which he planned to use to destroy a huge meteor…but instead, the missile missed, and took out the Kryptonian moon of Wegthor, ending Krypton’s rocket test, and resulting in Jax-Ur being the first criminal to be sentenced to the Phantom Zone…for eternity (and he was still there in the 30th Century, at least as far as Adventure Comics #305 would attest…though Phantom Girl of the Legion found the Mighty Gazor their as the last inhabitant of the Phantom Zone in Adventure Comics #323.  The Legion kept track of the Phantom Zone…for reasons to be revealed later….).  Jax-Ur plotted against Superman’s family of Lois Lane and Jimmy Olsen, but he even worked with Superman in Superman #205 when the two confronted Black Zero, an alien villain who claimed responsibility of the destruction of Krypton (and Superman and Jax-Ur work together to stop him).

The Female Is Deadly 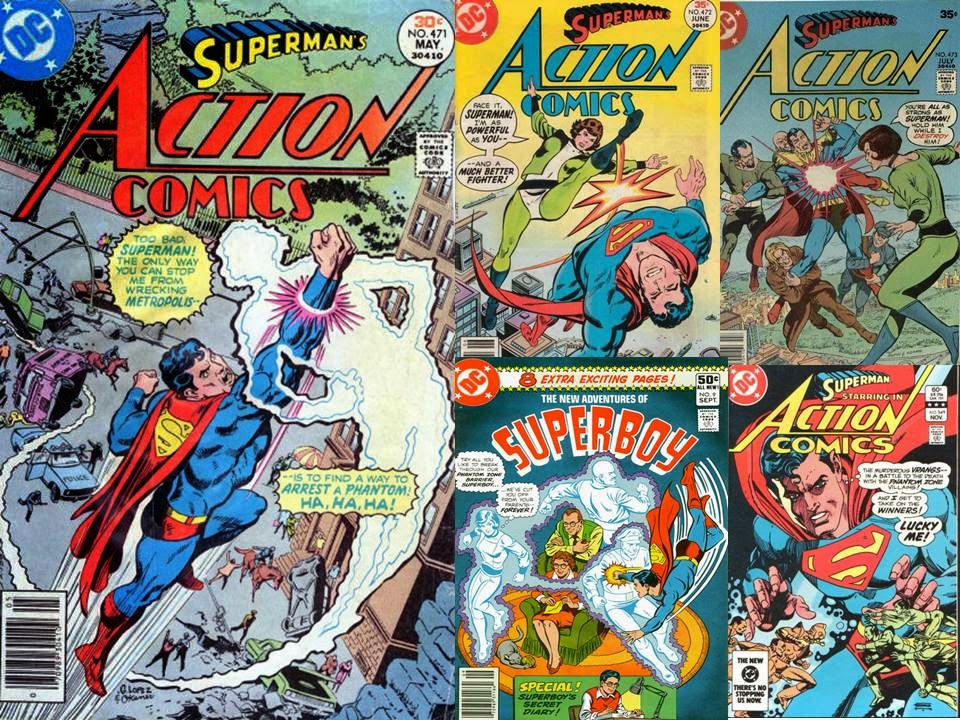 Hero In The Zone 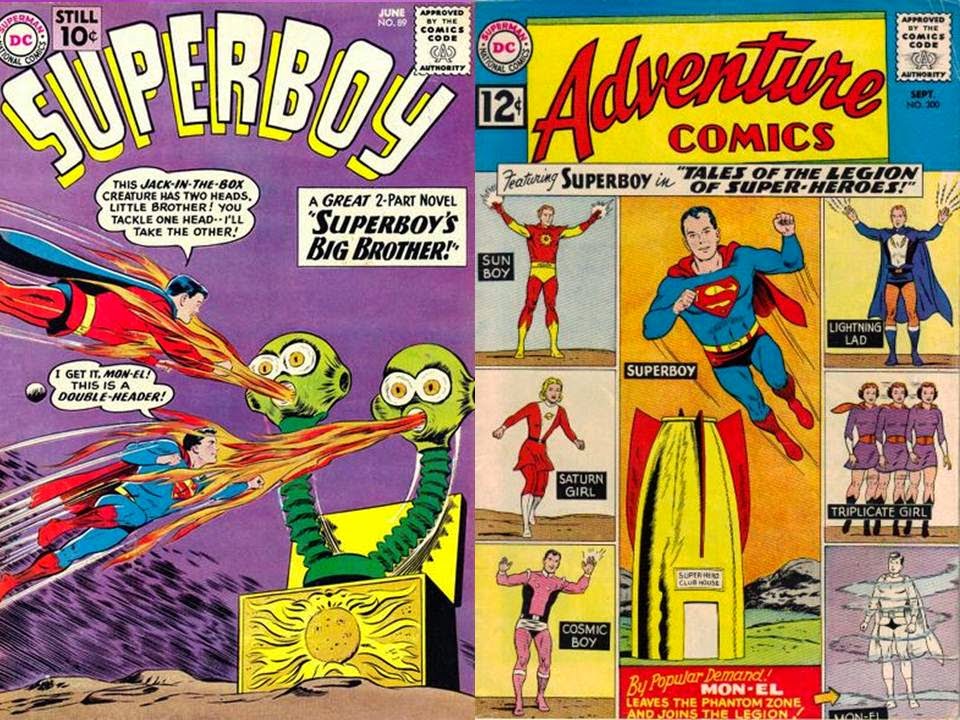 But first, a little on a hero in the Phantom Zone, Mon-El.  Mon-El was put in the zone in his first appearance, in Superboy #89 (June, 1961, by Robert Bernstein and George Papp).  Superboy found an amnesiac boy in a spaceship, and with his Kryptonian-like powers and a map from Jor-El, figured he must be his older brother!  Calling him Mon (after Monday, the day he found him) and the Kryptonian surname of El, he took in the lad, and even crafted an alter ego for him, of travelling salesman, Bob Cobb.  Except…(spoiler here), Mon-El was really from Daxam (a planet similar to Krypton), and the lad (really named Lar Gand), was not vulnerable to Kryptonite, but instead was sickened by lead, and got a fatal exposure to it thanks to Superboy.  To save his life, Superboy sent Mon-El into the Phantom Zone.  Mon-El helped Superboy (and later, Superman) for years to come…and had to wait a thousand years for a cure (found by Brainiac 5, a descendant of Superman’s foe, Brainiac) in Adventure Comics #305.

The Zone Is the Star 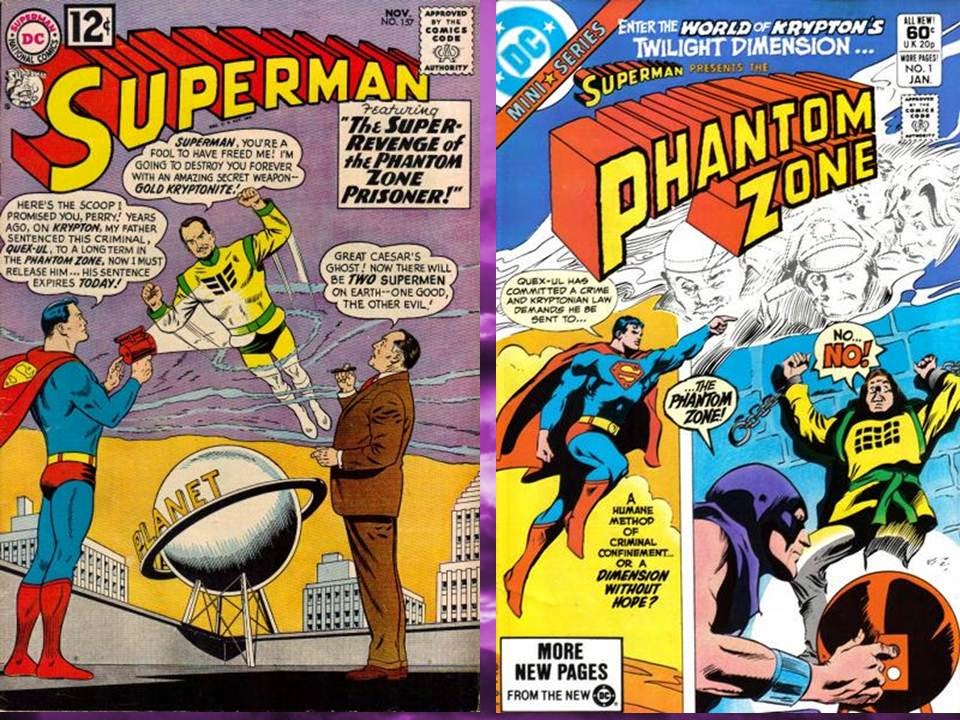 Some of these Kryptonians had to have sentences that elapsed between the time of Krypton’s destruction and Superman’s life span…and that was the case for Quex-Ul in Superman #157 (November, 1962 by Edmond Hamilton and Curt Swan).  In this story, Superman freed Quex-Ul, who was then plotting revenge on Superman as the son of his jailer, and Superman even ended up proving the Zoner was originally innocent (having been hypnotised into believing he was guilty).  After being informed of his innocence by Supergirl, Quex-Ul trips his own gold kryptonite trap on himself to save Superman (thus losing his powers forever)…and Quex-Ul even loses his memory in the process, but Superman helps him, by setting up a life for the Kryptonian as Charlie Kweskill, an employee of the Daily Planet. 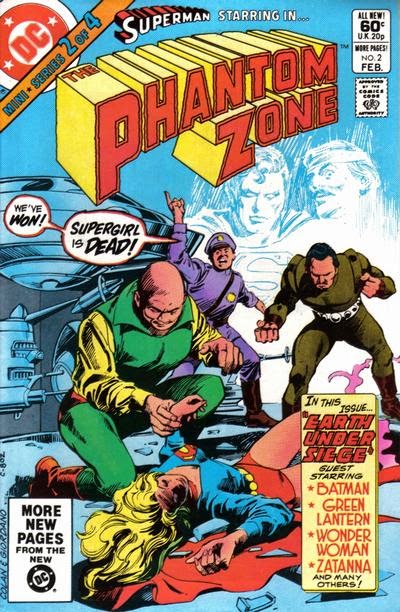 Charlie remains working at the Daily Planet until the Phantom Zone limited series (#1-4, from January to April, 1982, by Steve Gerber and Gene Colan).  This was a mass breakout from the Phantom Zone, and introduced us to Nadira Va-Dim and Az-Rel, who were Kryptonian criminals with super-powers beyond the normal, and brought back a few other Zoners like Nam-Ek (a Kryptonian scientist who made himself immortal, and later attacked Superman, and was sent to the zone by him, first appeared in Superman #282), Jer-Em (a mad Kryptonian cleric who knew the truth of the survival of Argo City, the home of Supergirl’s parents, and first appeared in Action Comics #309).  The Phantom Zone prisoners focused all their thoughts on Charlie Kweskill, and had him build a Phantom Zone projector to free them…Superman finds out about their plan, and tries to stop them, ending up in the Zone with Charlie, while a group of the criminals get free. 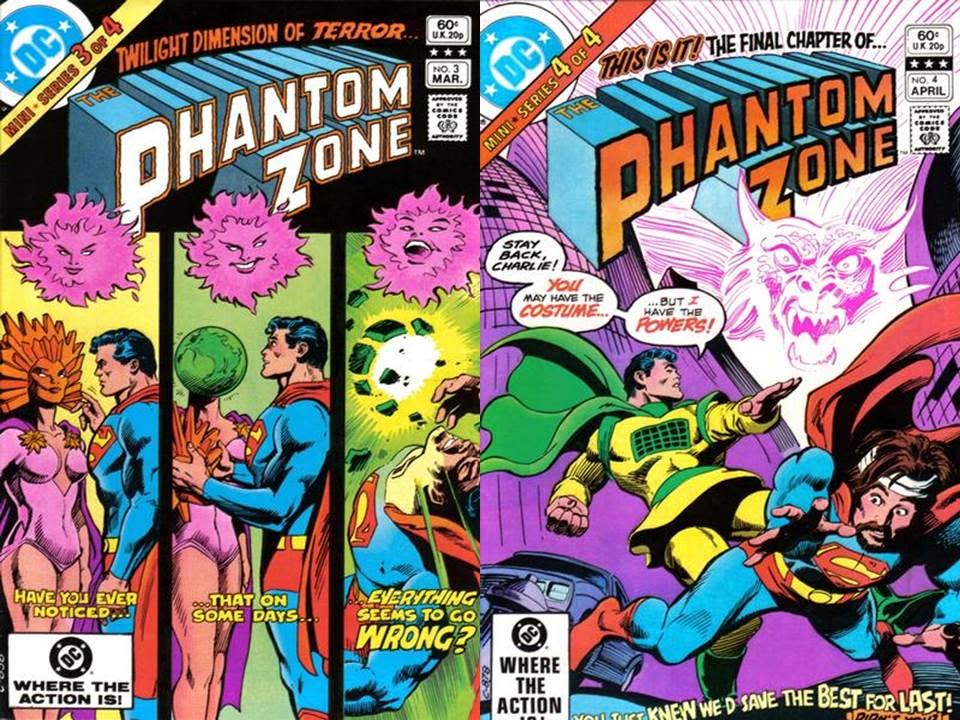 Superman and Charlie go further into the Phantom Zone to try to escape, while Supergirl recruits Batman for help, and the Zoners attack Green Lantern to get his power batter, and send the Justice League satellite out of orbit (taking most of the JLA except for Wonder Woman out of the fight).  Zod planned on using the Green Lantern power battery to power a super-projector to send all of Earth into the Phantom Zone.  Meanwhile, Superman and Charlie go further into the Zone to attempt to escape…and find out about Krypton’s secret magical history from Thul-Kar, and that the zone is a living entity called Aethyr.  Charlie and Superman do manage to escape, but not without cost, and the heroes do send the Zoners back to the Phantom Zone (with Green Lantern getting his power battery back, and going to rescue the JLA…).  Pretty involved for something Jor-El simply thought he stumbled across on Krypton! 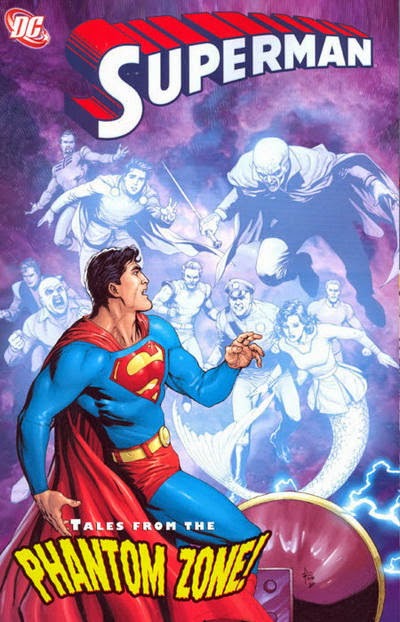 The Phantom Zoners came back a few times after the mini-series…but never quite with as much force.  Sadly, this batch was wiped out of existence by the Crisis on Infinite Earths, closing the door on the Silver Age of the Phantom Zone.  But, thanks to the Superman movies (with Terrance Stamp as Zod), the General kept coming back in the comics (even being a major foe for Clark Kent in Smallville, and being portrayed by Callum Blue), and Zod (and a few others) return with the latest Superman movie, the Man of Steel, as played by Michael Shannon.  Quite a few of the early tales of the Phantom Zone were recently collected (though not the mini-series, sadly….) 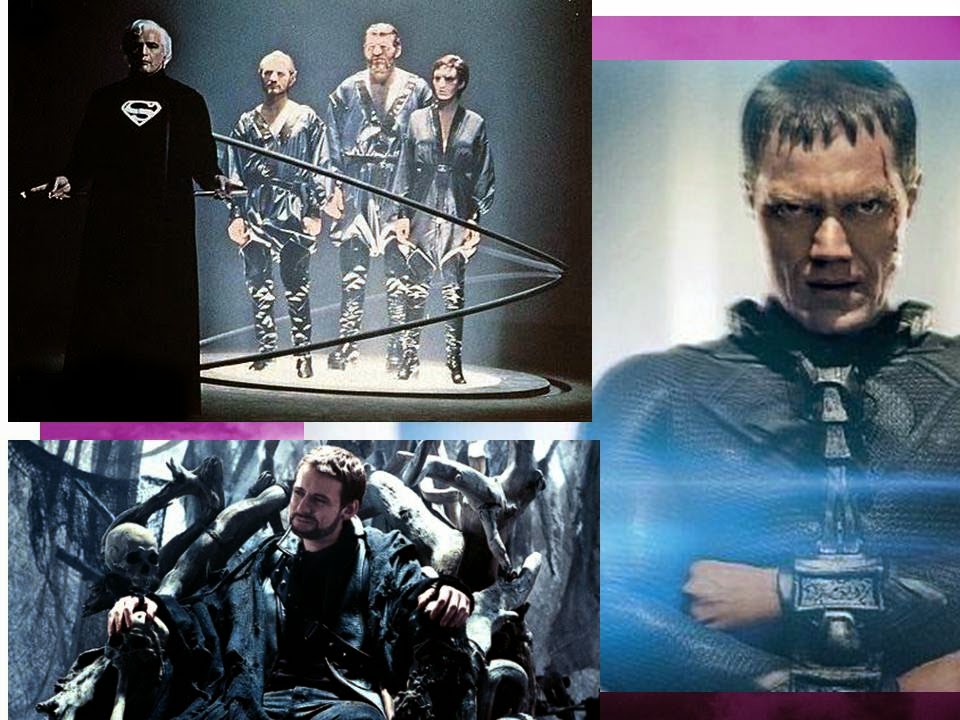 Appears the General (as well as the rest of the Zoners) were able to survive the destruction of their world, and their universe and go beyond…where everyone shall “kneel before Zod!”.
Posted by Dave's Not Here Comic Blog at 7:04 AM