The Weddings of Superman and Lois Lane 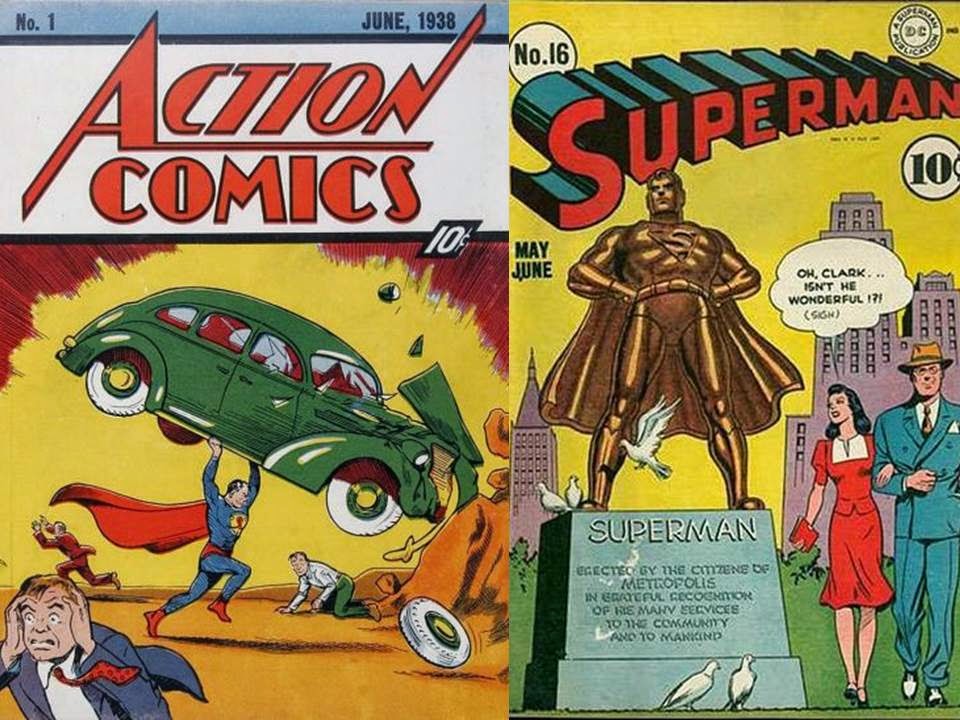 That’s been true since the days of Action Comics #1 (June, 1938, by Jerry Siegel and Joe Shuster) when Superman (Clark Kent) and Lois Lane first met as newspaper reporters.  These two were just fated to get together, weren’t they?

But, when did the weddings start? 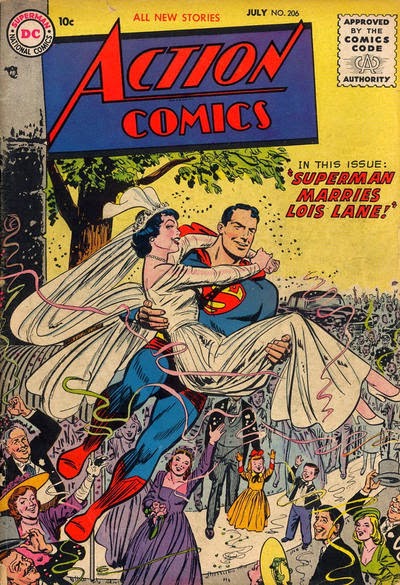 Action Comics #206 (July, 1955) is when “Superman Marries Lois Lane”…in an issue drawn by Wayne Boring, where Superman did indeed marry Lois, and there were criminals trying to blow up the wedding cake…with Clark Kent as the best man?

Sometimes, life is but a dream...

…but, there would be more attempts at a marriage for this duo during the course of the Silver Age coming up in the future (but, sadly, this tale has yet to be reprinted...)! 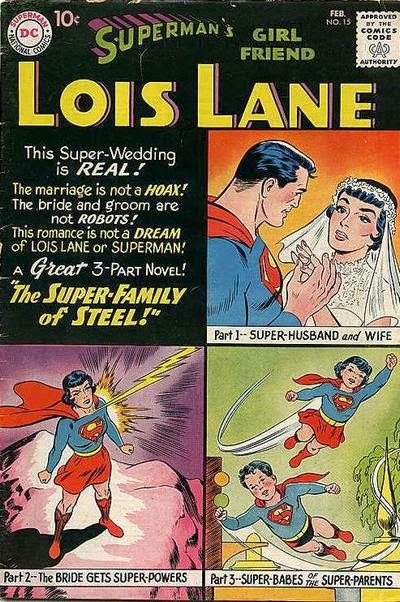 A few other get-togethers were attempted over the next few years, but the oddest was Superman’s Girlfriend, Lois Lane #15 (February, 1960, by Otto Binder and Kurt Schaffenberger).

There was indeed a marriage in the issue, and it’s not a hoax, not a dream or done by robots!

The cover truly says it all…except what happened inside!  This story is also reprinted in Superman #207, and in Showcase Presents: Superman Family Volume #3, so you can find out the trick used if you so desire (pretty sneaky, really!).


This is a Silver Age 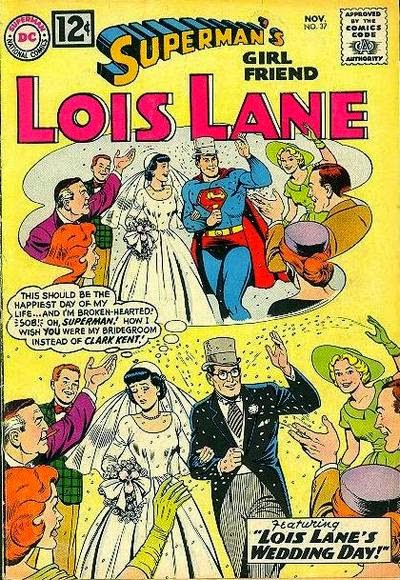 Lois and Clark were indeed at a wedding to each other in this one, but sadly, it didn’t hold up, though at some point, you have to figure that the Silver Age Lois and Clark do get together in matrimonial bliss (as the Legion of Super-Heroes and other future tales promise this….).

“Lois Lane’s Wedding Day” was reprinted in Superman’s Girlfriend, Lois Lane #86 if you are interested in the full story.... 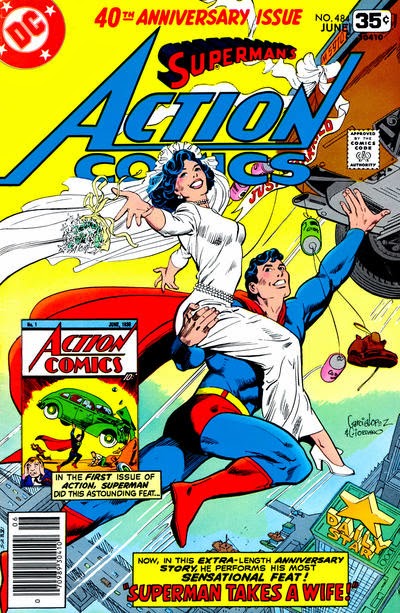 In Action Comics #484 (June 1978 by Cary Bates and Curt Swan, with a cover by Jose Luis Garcia-Lopez) Lois and Superman are getting married in “Superman Takes A Wife”…right on the cover…but, is that the Daily Star?  Where’s the Daily Planet?  Why is Superman’s Fortress of Solitude in the Metropolis mountains and not by the North Pole?  Why did the couple face the Wizard, a foe of the Justice Society of America?  Yes, it was the original Golden Age Clark Kent and Lois Lane who got married…once Superman was out of the triangle.  This allowed Clark Kent to be the hero who shaped the future (and beat Colonel Future…the foe of the issue; with a little later assist from Superman).

Mr. and Mrs. Superman even had further adventures set in the 1950s, in Superman #327 and #329, and issues of Superman Family from #195-222 before the Crisis on Infinite Earths took that Superman and Lois away for a time.  The tales of a married Superman and Lois have yet to be collected, but Action Comics #484 was reprinted in Superman in the Seventies TPB and in DC Retroactive: Superman – the 70s #1. 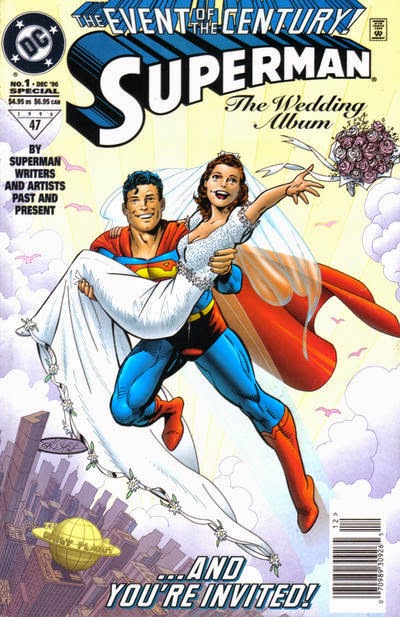 
But, as Lois once said to Clark: “Perfection’s a hard thing to get your hands on…I promise that I will always have your back as you will have mine.  You’re my best friend, you’re my home, and you are my true love, and I am yours and will be forever.”

And, Clark to Lois: “When I’ve been lost, you’ve always been there to bring me back….  You’ve always believed in me, and I believe in you.  And when you believe in someone, it’s not just for a minute, or just for now, it’s forever.” 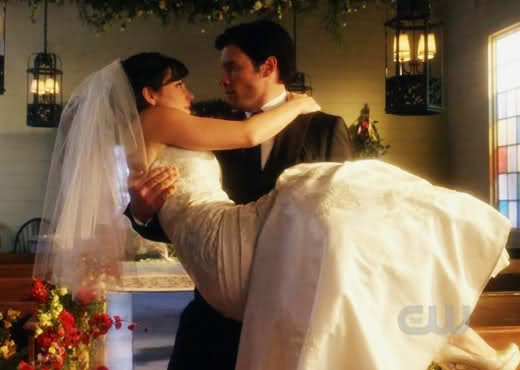 It was the Lois and Clark TV series deciding to marry the duo that prompted DC to marry them in the comic at that time….(with Teri Hatcher and Dean Cain). May all your weddings be this happy (and free of kryptonite!).
Posted by Dave's Not Here Comic Blog at 6:00 AM