Metallo The Man With The Kryptonite Heart 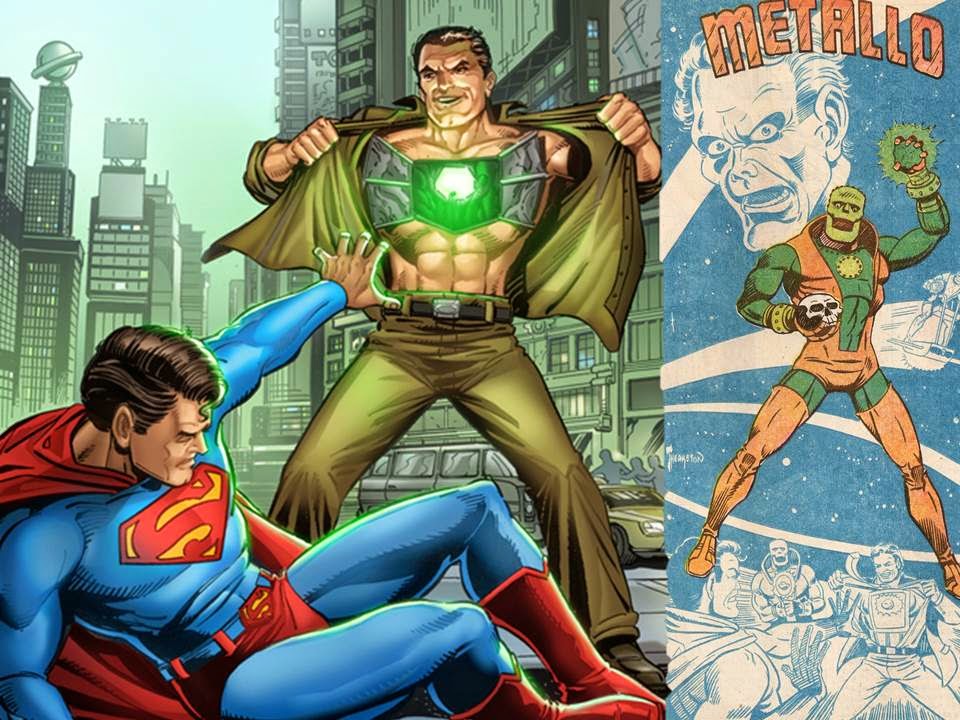 The Man With The Kryptonite Heart!

He's been menacing Superman on and off since 1959....but what do we really know about him?

Well, let's start with his beginnings!

A Real Man of Steel 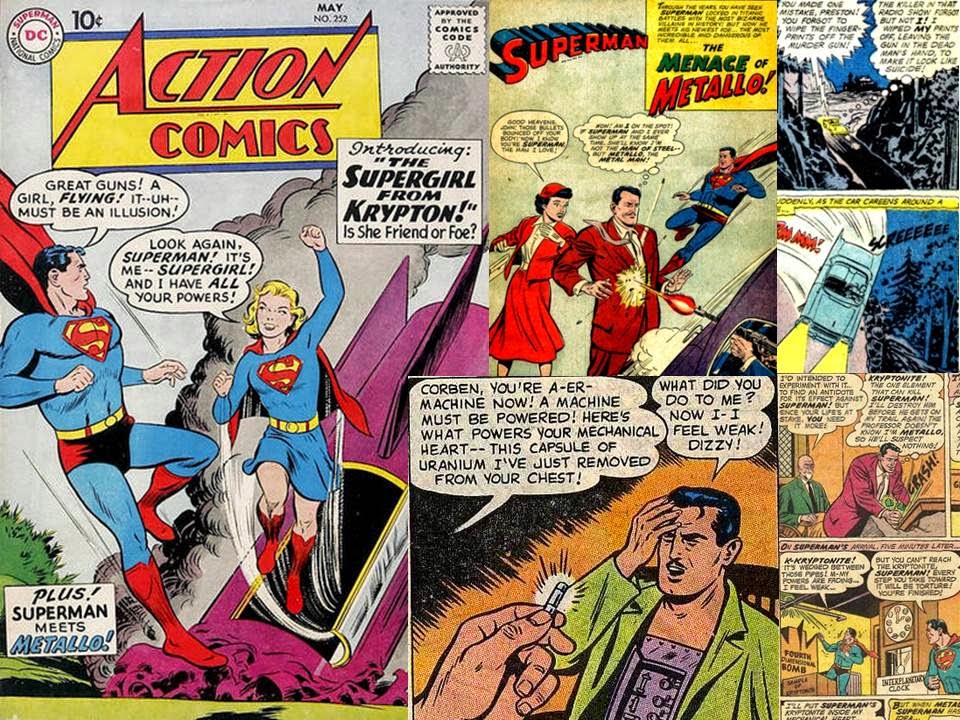 The first Metallo first appeared in Action Comics #252 (May, 1959 by Robert Bernstein and Al Plastino, in the same issue which saw the introduction of Supergirl) in "The Menace of Metallo" wherein Professor Vale takes the crushed body of thief, embezzler and murder John Corben, and puts his brain into a robotic body with artificial flesh, powered by uranium, which frequently runs out after only a day.  So, while posing as a Daily Planet reporter, Corben gets close to Lois Lane, and from Vale, realizes that Kryptonite would be a better power source instead, and becomes known as Metallo.  While setting a trap for Superman, Metallo takes a prop piece of fake Kryptonite as his power source, and dies (and Superman escaped Metallo's trap). 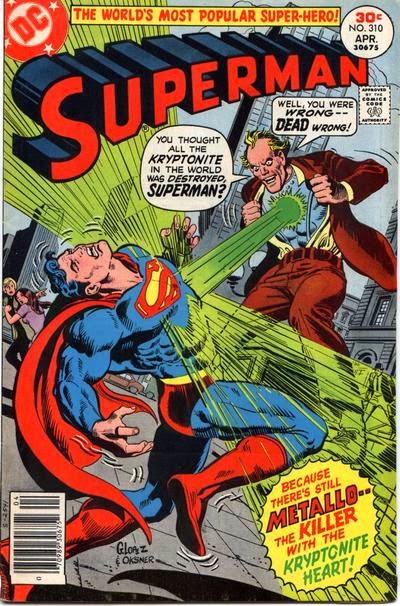 The second Metallo came about when an accident happened while Superman was facing some S.K.U.L.L. thugs...in Superman #310 (April, 1977 by Martin Pasko and Curt Swan).

This accident happened to Roger C. Corben, the brother of the original Metallo, who had joined S.K.U.L.L. to get revenge on Superman, and S.T.A.R. Labs saved Corben's life by making him into a cyborg as well, and he was also powered by Kryptonite. 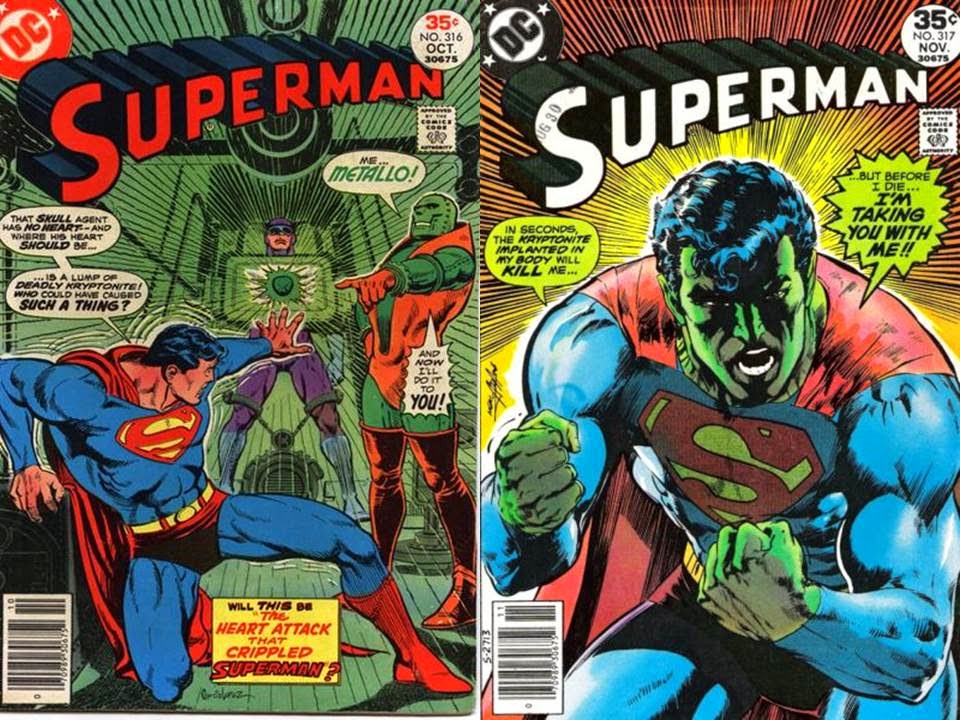 Metallo blamed Superman and S.K.U.L.L. for his problems, and wanted revenge on them both.

In Superman #316 and #317 (October-November, 1977), Metallo did just that (in stories by Pasko and Swan, and stunning covers by Jose Luis Garcia Lopez and Neal Adams) and planned to take Superman's heart after the Man of Steel died from his Kryptonite trap (it didn't work out). 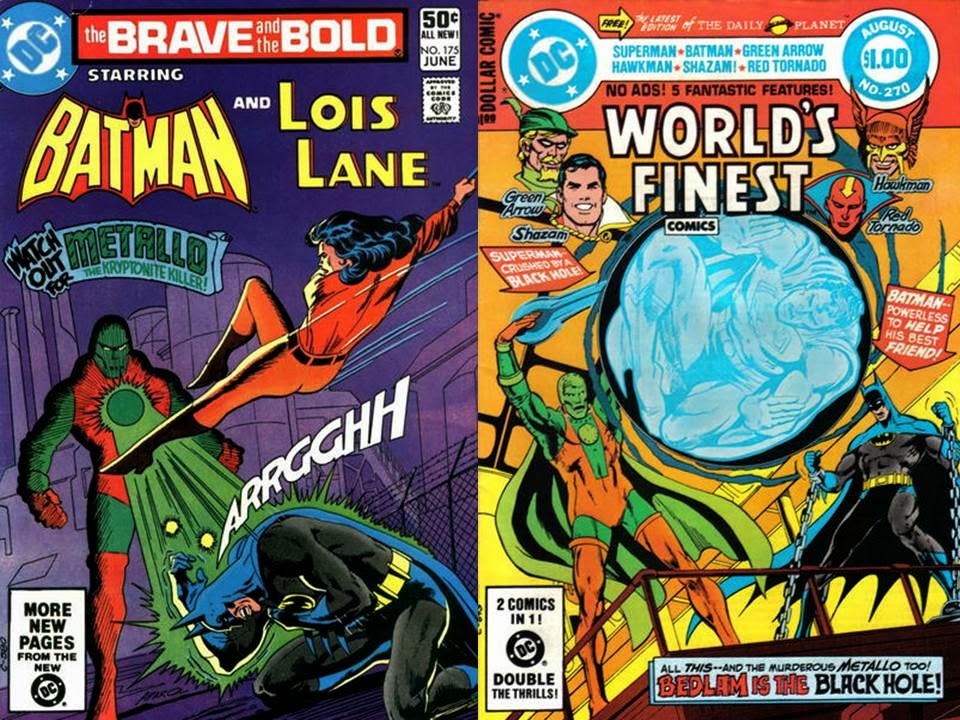 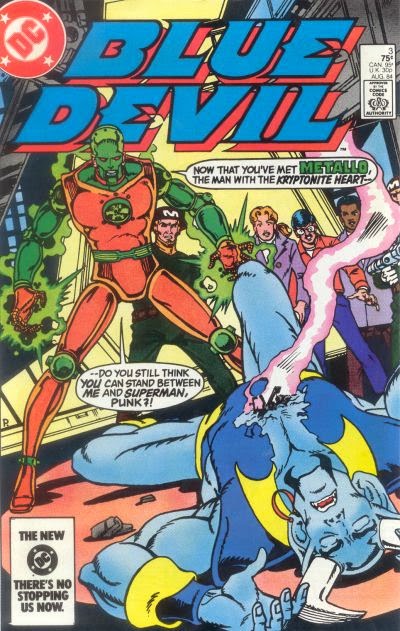 Metallo even attacked S.T.A.R. Labs again, drawing in Blue Devil (who stopped Shockwave from getting some of the Labs' experimental Kryptonite, and himself was a man trapped in a mechanical suit, except Blue Devil was trapped by mystic forces) with Blue Devil #3 (August, 1984) which led Superman to take Blue Devil to meet the Justice League of America for assistance (though it didn't really work out...).

Metallo ended his pre-Crisis career with an appearance facing Superman in Superman #418 (April, 1986), being one of many Superman foes who didn't appear within the pages of the Crisis on Infinite Earths, which caused Superman's history to be changed (which was detailed a little in the Man of Steel mini-series, and led to...). 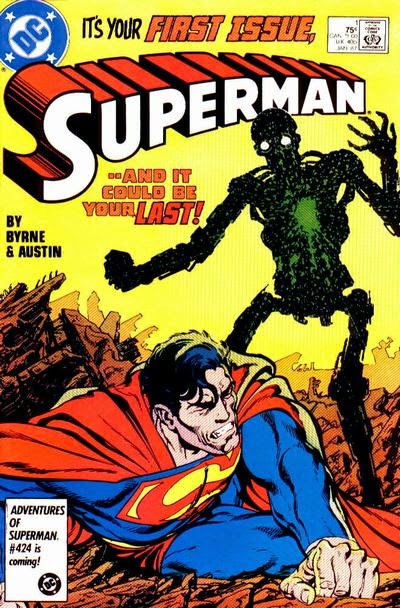 This Metallo was more of a Terminator type robot, and kept coming back.  John Corben was a con man who was injured in a car crash, and restored by Professor Emmet Vale (as the cyborg Metallo).

In thanks, John killed Prof. Vale, and then went to attack Superman....who was saved by Lex Luthor (because Luthor felt only he had the right to kill Superman!). 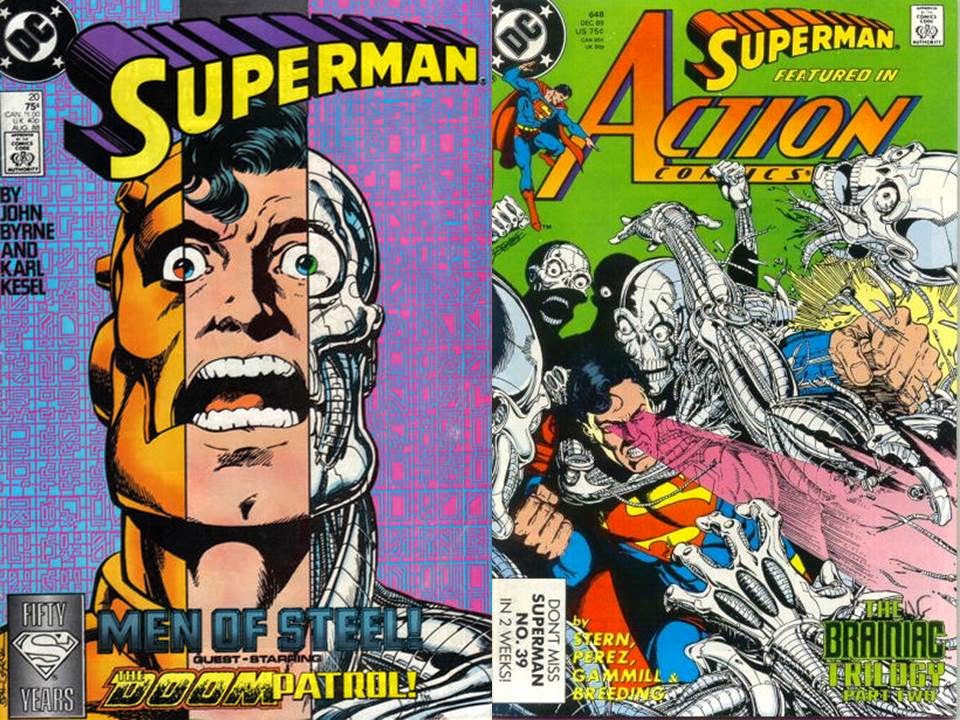 Luthor used Metallo for research, but the villain came back a few times, facing Superman with the Doom Patrol (including Robotman, who had parts from LexCorp (see Doom Patrol #10 and Superman #20).  Metallo was revived again by Brainiac to keep Superman busy (Action Comics #647-649).

Mostly, Metallo was used by another villain...and Superman defeated him by taking his head off (his brain was on a separate system, so the villain survived, just wasn't threatening as a head!). 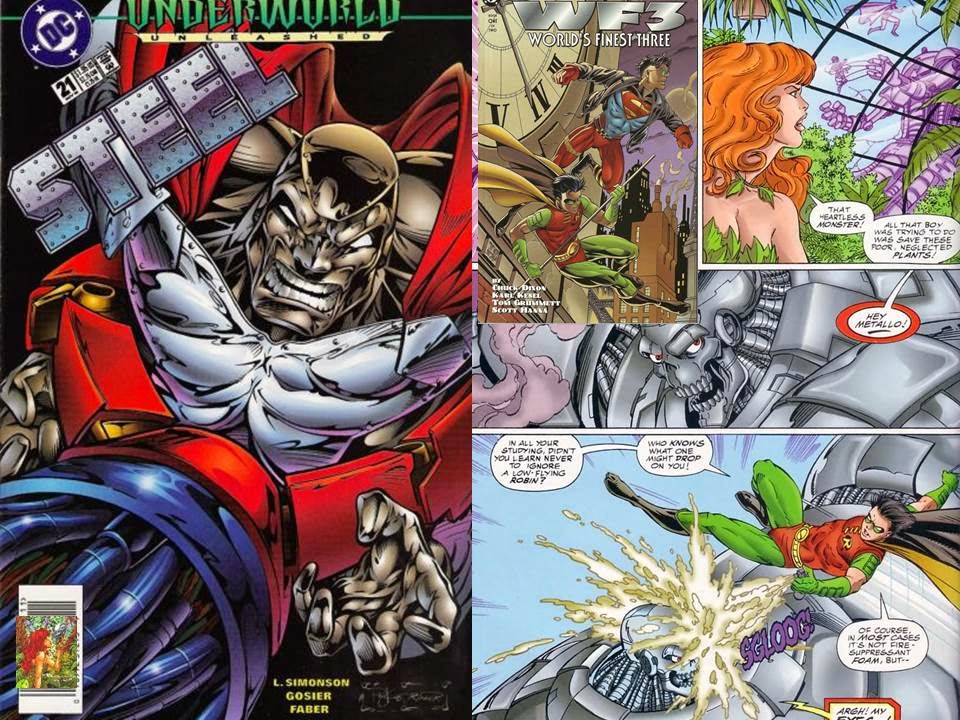 With this track record, Metallo needed an upgrade, and got one courtesy of soul-stealing Neron during Underworld Unleashed!  Now able to incorporate all metal around him into his body, Metallo became a bigger threat (but still vulnerable to having his head removed...ending his threat for a time!).

This put Metallo into conflict with Steel (the Superman substitute that became a hero on his own) in Steel #21, as well as Superboy and Robin in Superboy/Robin:World's Finest Three #1 and 2 (there, working with Poison Ivy). 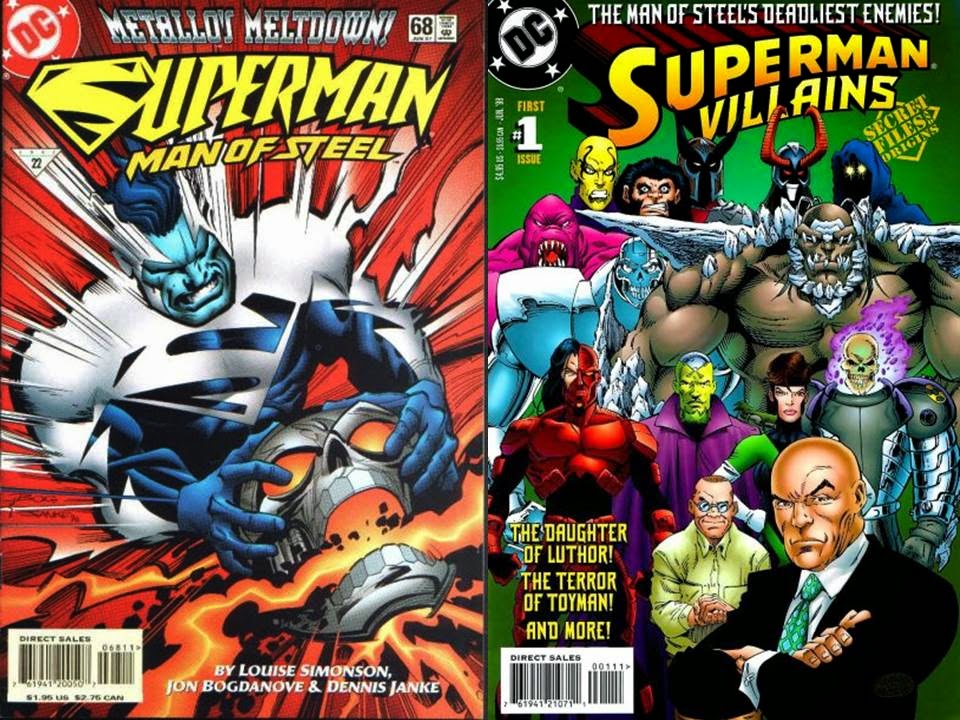 Still, Metallo was mostly a pawn, even if he had quite a few appearances in this form!

Metallo had started to be a "big man", but compared to all of Superman's other foes, he was never quite the biggest!

Yet, not unlike Superman, Metallo also came back, time and again.... 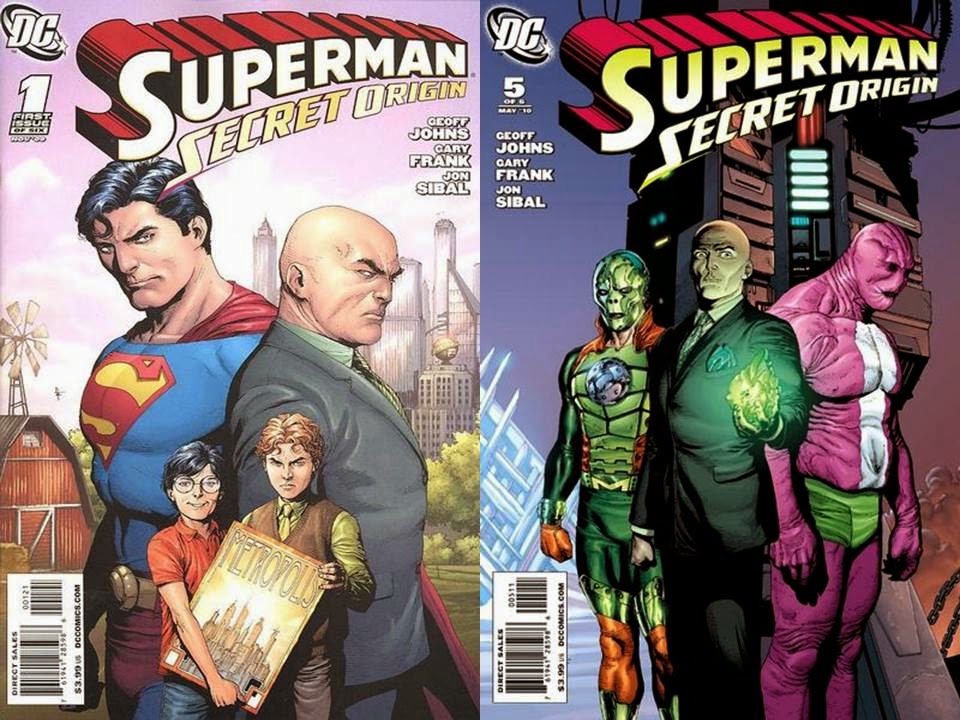 ...when Superman had yet another historical revision with the six issue mini-series Superman: Secret Origin, Metallo was restored a little closer to his 1970s roots, being mostly a man-sized threat as John Corben, who thanks to fighting Superman in a super-suit, gets wounded and reborn as Metallo, with a kryptonite heart (thought this time, made by Luthor, and Corben is also a threat to the Clark and Lois relationship as well!). 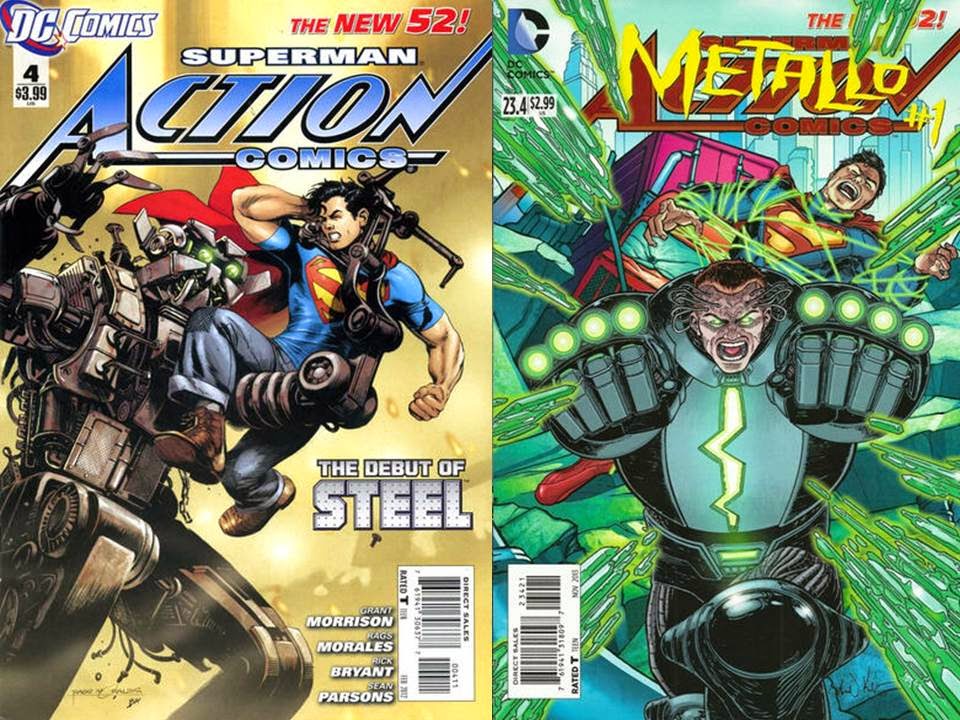 That origin stood for a while, until DC started over yet again after Flashpoint.   This time, John Corben is a soldier in the Metal-Zero suit...and later becomes Metallo!

Seems Metallo will always return to plague Superman....he's as persistent as a heart attack!