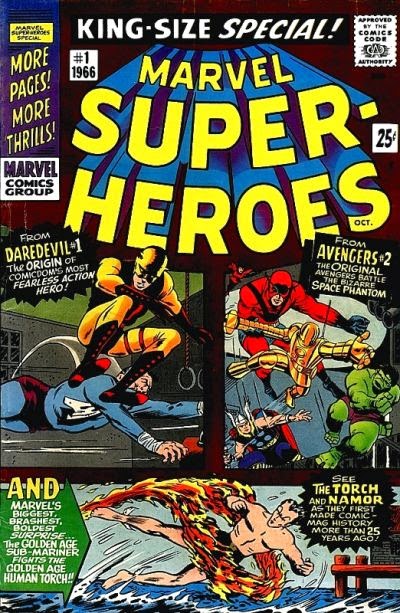 Marvel Comics didn’t have an anthology title dedicated to introducing new characters in the 1960s like DC Comics had Showcase….well, almost didn’t, but then they did!
Starting in December 1967, the reprint title of Fantasy Masterpieces (which had lasted 11 issues, and reprinted Golden Age tales of Captain America, the Human Torch and the Sub-Mariner), became the new Marvel Super-Heroes comic (not related to the one-shot 1966 Marvel Super-Heroes reprint…).
This new title contained some reprints, but also had new stories, and it is those new stories that will get a little coverage here… 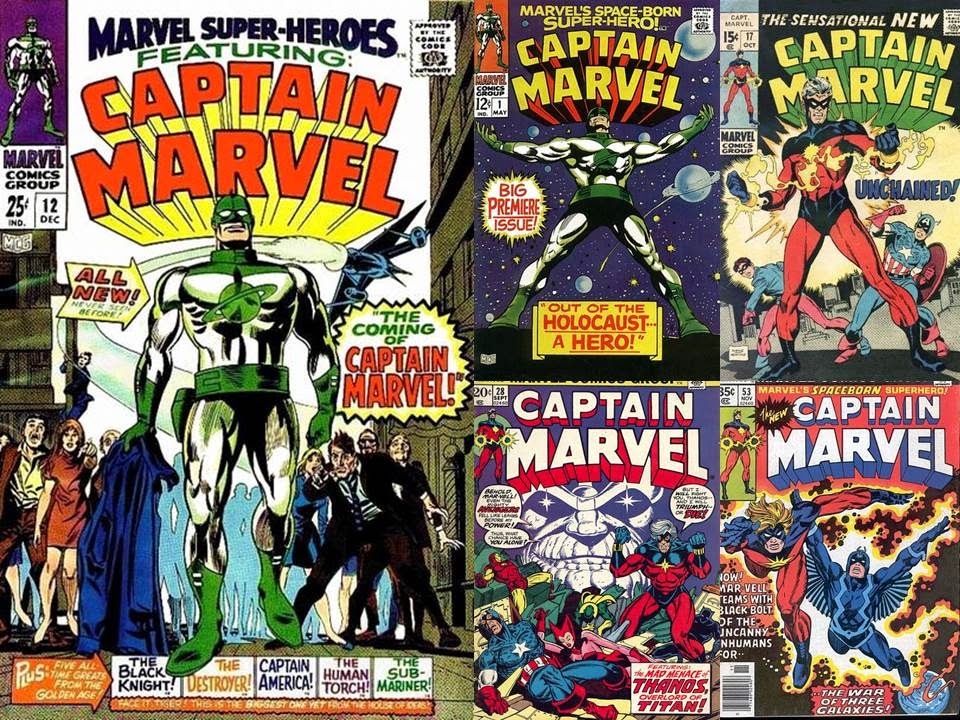 Marvel Super-Heroes #12 (December, 1967 by Stan Lee and Gene Colan) had reprints in it, but also contained the new story of Captain Marvel (well, really Captain Mar-Vell), a Kree warrior sent to Earth to investigate the Sentry recently defeated by the Fantastic Four.  This spaceman originally started as a foe of Earthmen, but eventually became Earth’s protector, and then the protector of the universe, changing his costume and gaining Rick Jones as a partner (and making him more like Fawcett’s Captain Marvel, whom this hero took the rights to having that name on a cover, and is the reason why DC calls the original Captain Marvel Shazam!…where a boy and a man share an identity with issue #17…), fighting Thanos (with the Avengers in issues #26-33), Nitro (#34 and #54) and even helping the Inhumans (in #52-53) and more over the course of 62 issues of his own title (not quite published continuously).  This early tale is reprinted in Marvel Masterworks Volume #50: Captain Marvel #1 along with… 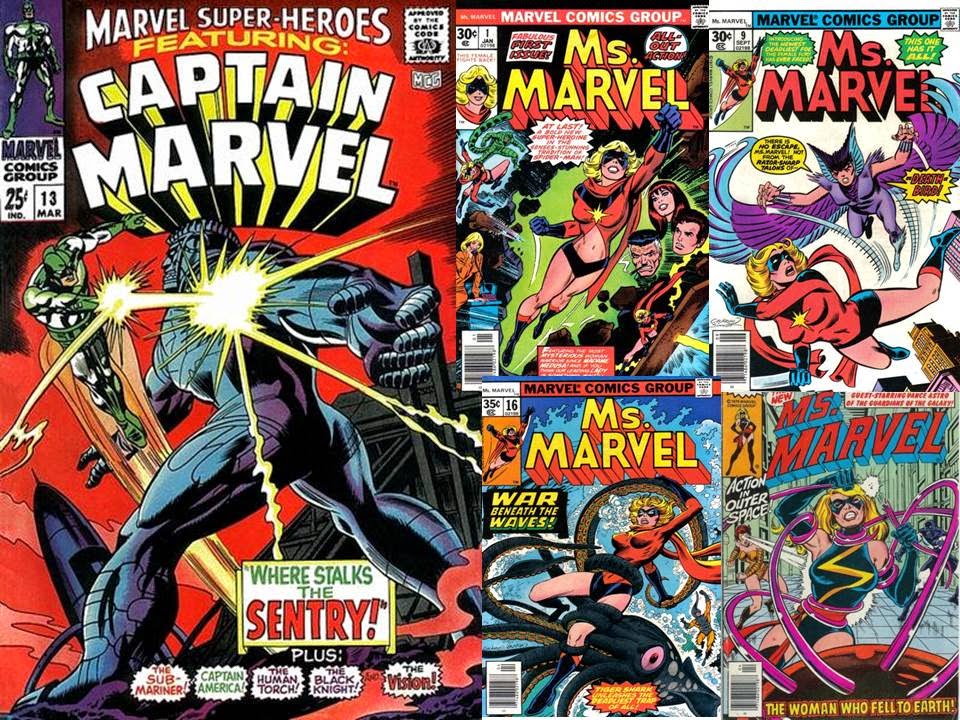 Marvel Super-Heroes #13 (March, 1968, by Roy Thomas and Gene Colan), a tale that had Captain Marvel fight the Sentry (and led into Captain Marvel #1 in May, 1968) but this issue also introduced Carol Danvers, who eventually became Ms. Marvel (as well as Binary, and most recently Marvel’s newest Captain Marvel).  While Ms. Marvel #1 (January, 1977) was written by Gerry Conway and drawn by John Buscema, Chris Claremont of X-Men fame ended up writing the majority of the issues, introducing characters along the way like Deathbird (in #9), Mystique (in #16), had a great new costume designed by Dave Cockrum introduced in #20, and met the Guardians of the Galaxy in #23, the series last issue in April 1979…and had the series continued, Rogue would have been introduced here instead of in Avengers Annual #10 (1981).  While not having a Marvel Masterworks (yet), Ms. Marvel’s 23 issues have been collected in the black and white Essential Ms. Marvel, along with Avengers Annual #10, and 1990′s Marvel Super-Heroes #10 and 11, which contain the original stories for Ms. Marvel #24 and half of #25, where Ms. Marvel meets Sabretooth and then Rogue.

Spider-Man To The Rescue 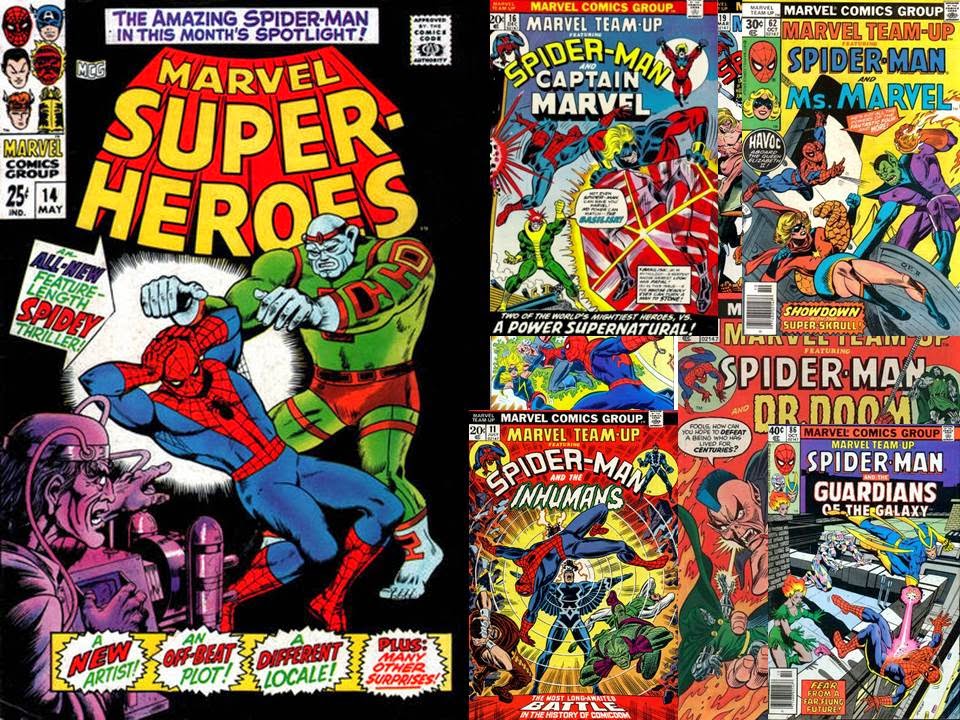 Marvel Super-Heroes #14 (May, 1968) contains an odd tale of Spider-Man by Stan Lee and Ross Andru (and inked by Sub-Mariner creator Bill Everett)….odd that in it was commissioned when artist John Romita sprained his wrist and there was concern he wouldn’t be able to finish his Amazing Spider-Man issue in time…thankfully, Jazzy John was able to…and thus, this tale of Spider-Man vs. the Sorceror and his Synthetic Man had no home…until it was printed here!  Spidey has plenty of history, and later got a title called Marvel Team-Up which he shared with other Marvel stars, including ones from Marvel Super-Heroes, like Captain Marvel (#16), Ms. Marvel (#62 and #77), the Inhumans (#11), the Guardians of the Galaxy (#86), Ka-Zar (#19) and Dr. Doom (#43).  This story is reprinted in Marvel Treasury Edition #1 and in Marvel Masterworks Volume #68: Amazing Spider-Man #8. 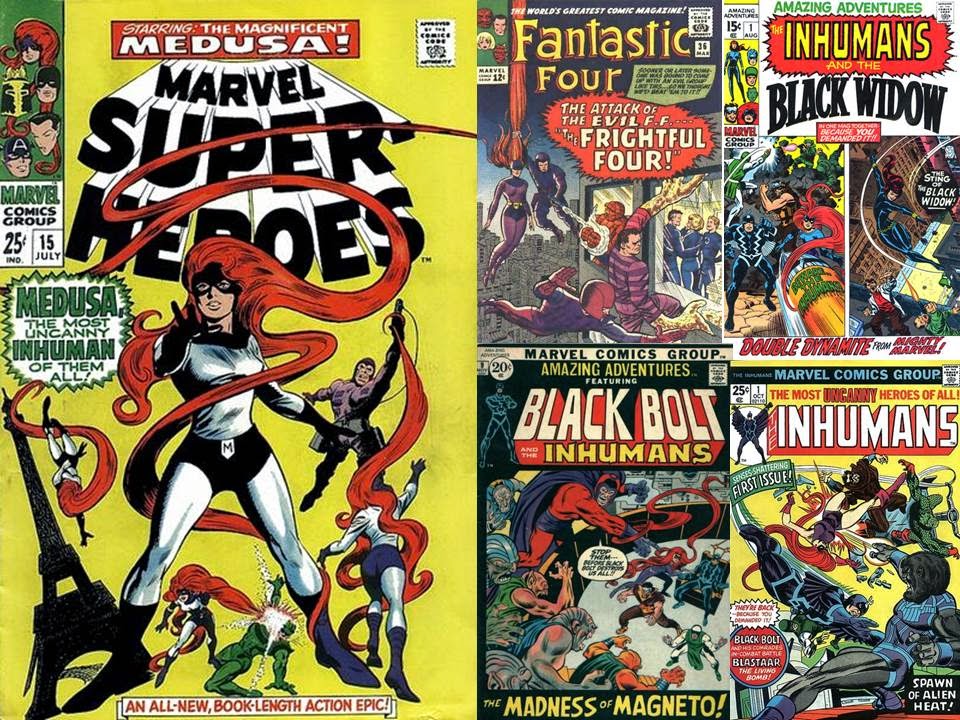 Marvel Super-Heroes #15 (July, 1968) has a story of Medusa, the most uncanny Inhuman of them all.  Medusa first appeared in Fantastic Four #36 (March, 1965, by Stan Lee and Jack Kirby) where she was the fourth member of the Frightful Four (along with Wizard, Paste-Pot Pete who would later be known as the Trapster, and the Sandman), but later, the lady with the power of the red hair would have her past as an an Inhuman revealed.  In MSH #15 by Archie Goodwin and Gene Colan, she faced her former Frightful Four partners!  The Inhumans later got their own series for 10 issues of Amazing Adventures (but these stories focused more on Black Bolt, and even had a battle with X-Men’s Magneto and were from August 1970 until January 1972).  Later still, the Inhumans had their own title which lasted twelve issues, where the people of the Great Refuge faced Blastaar, Shatterstar, Maximus and the Hulk…and that storyline wrapped up in Captain Marvel’s title.  You can read this adventure in Marvel Masterworks Volume #125: The Inhumans #1 (which also contains the 10 tales of the Inhumans from Amazing Adventures, as well as some Inhuman history from Thor #146-152). 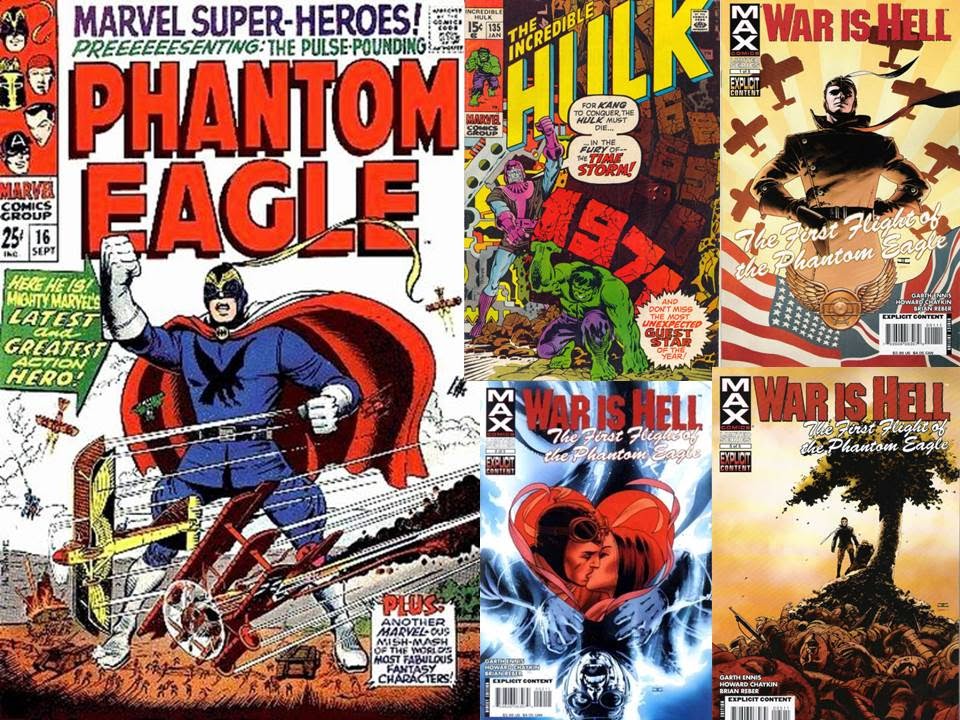 Marvel Super-Heroes #16 (September, 1968 by Gary Friedrich and Herb Trimpe) introduced the Phantom Eagle (Karl Kaufman)…World War I’s greatest hero!  This aviation ace didn’t really get a series of his own…his next appearance was in the Incredible Hulk #135 (January, 1971) where he was involved in a battle between the Hulk and Kang!  Phantom Eagle did finally get a title of his own in 2008, a five issue mini-series called War Is Hell: the First Flight of the Phantom Eagle (by Garth Ennis and Howard Chaykin!).  The first appearance of Phantom Eagle was sandwiched into Marvel Masterworks Volume #193: Incredible Hulk #7 (along with his Hulk tale), but, time has caught up to us here…so, we end this half of our Marvel Super-Heroes review…but check back in the future for more (issues #17-20, covering Black Knight, the Guardians of the Galaxy, Ka-Zar and Dr. Doom!).
Posted by Dave's Not Here Comic Blog at 6:30 AM