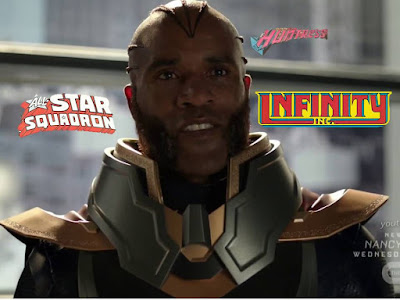 The previous adventures of the Monitor and Lyla focused on their interactions with Earth-1, but they were observing the entire DC Multiverse.


Here are their observations of Earth-2, where they were checking out the groups there. 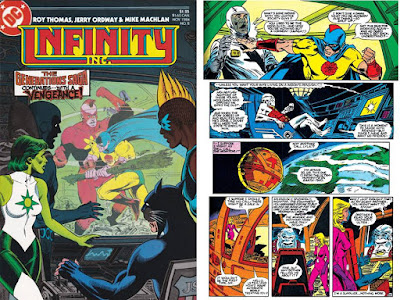 First up, part of the origin of Infinity, Inc., from Infinity, Inc. #8 (November, 1984) by Roy and Dann Thomas, Jerry Ordway, Mike Machlan and Tony DeZuniga.

The members of Infinity, Inc. were the sons, daughters and proteges of the Justice Society of America, and were dealing with those mentors having turned evil due to exposure to the "Stream Of Ruthlessness" (which turned heroic people evil).  As the Golden Age Atom battled Nuklon, the Monitor negotiated with the Ultra-Humanite (a foe of the Golden Age Superman).


The Rise And Fall Of The Phantom Empire 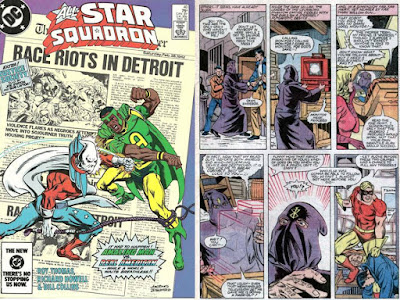 Next up, Lyla and the Monitor are looking even further back, all the way to World War II on Earth-2, with the All-Star Squadron, in All-Star Squadron #40 (December, 1984) by Roy Thomas, Richard Howell and Bill Collins, under a cover by Arvell Jones.


The All-Star Squadron was a gathering of all the heroes of Earth-2 during World War II, focusing more on heroes who hadn't been members of any group before, like Johnny Quick, Liberty Belle, Robotman, and new heroes, like Firebrand and Amazing-Man.  Here, they defeated the Phantom Empire in Detroit (and readers learned that their super-powered front man, the Real American, was an android, supplied to them using future technology, by the Monitor).  Events of this story led to Amazing-Man becoming a member of the All-Star Squadron. 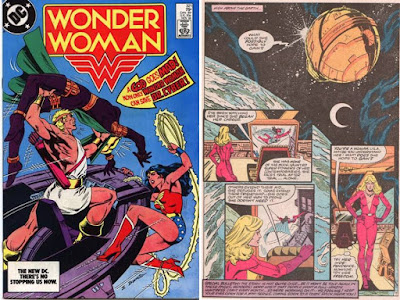 Last, but not least of the tales of Earth-2, is Wonder Woman #321 (November, 1984), which has the last of the back-up tales of the Huntress (Helena Wayne, Batman's daughter) by Joey Cavalieri, Rod Whigham and Rick Magyar.

After a particularly hard time on a case, Helena Wayne (who became a hero after the death of her mother, the Catwoman....who had married Bruce Wayne/Batman, as these two had careers in the 1940s on Earth-2, and ended them in the 1950s).  In Huntress' reflections, as the Monitor cataloged her, Lyla wondered about her own place in the events to come.

This tale of the Huntress has yet to be reprinted (though the first half of Huntress' back-ups has been, twice), and the mini-series promised never happened, thanks in part to the Crisis On Infinite Earths. 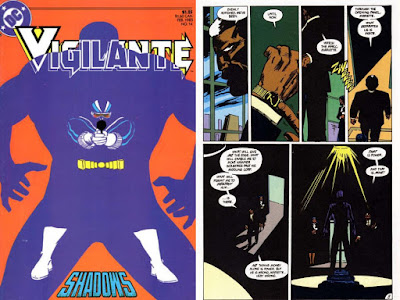 To be fair, Vigilante #14 (February, 1985) by Marv Wolfman and Trevor Von Eeden, didn't contain an appearance by the Monitor or Lyla, nor did it focus on the Earth-2 Vigilante, who was a member of Seven Soldiers of Victory of Earth-2, but instead focused on Adrian Chase, who had on occasion opposed the New Teen Titans of Earth-1.

But, the super-suit which allowed Mr. Hammer to blend into the shadows likely was supplied by the Monitor (and this Vigilante had his beginnings in the first tale that Lyla appeared in). 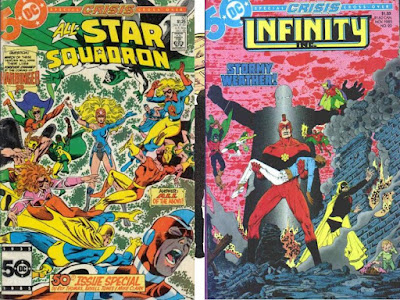 The Monitor and Lyla also observed a team-up of the JLA/JSA and Supergirl, and they would continue to watch Earth-2, as well as other times and places from World War II, to the wild west to the far future as events progressed to the Crisis On Infinite Earths.