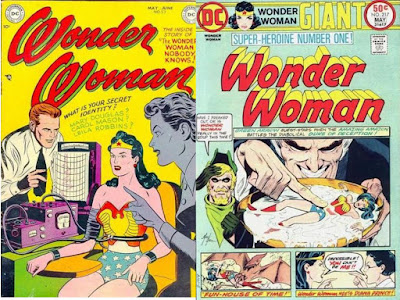 Wonder Woman would make liars tell the truth with her Golden Lasso, but Wonder Woman creator, William Moulton Marston (also under the pen name of Charles Moulton), helped to create a systolic blood pressure test (which led to the modern day lie detector).

Here's a little of how that truth intersected with Wonder Woman comics! 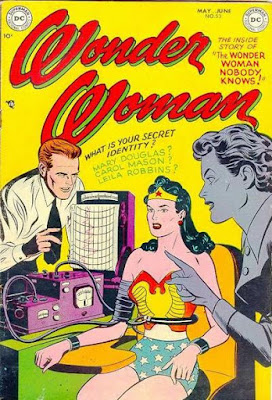 
....one of the stories of the issue was the tale of "The Wonder Woman Nobody Knows", where a reporter followed Wonder Woman around all day, sometimes asking questions, all in an attempt to save her own job at the magazine she worked for....

Sadly, this story has not been reprinted for a modern audience. 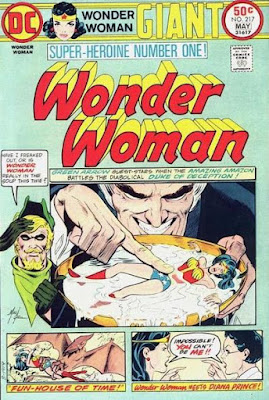 With Wonder Woman #217 (April-May, 1975), under a cover by Mike Grell, the tale was told of "The Day Time Broke Loose", by Elliot Maggin, Dick Dillin and Vince Colletta, wherein Green Arrow was narrating the tale of one of Wonder Woman's 12 Labors to rejoin the Justice League while hooked up to a lie detector, telling of Wonder Woman's reality bending battle with the Duke of Deception, by the end of which, both Green Arrow and Wonder Woman weren't sure of what was true anymore (and showed that the JLA needed Wonder Woman for her Golden Lasso, as well as everything else Diana brought to the table).

This issue also reprinted a story from Wonder Woman's Golden Age, telling of Diana Prince (the young woman whose identity the Princess from Paradise Island took over to stay near Steve Trevor....this from Sensation Comics #9), and a tale from the Silver Age, with Wonder Woman facing the Time-Master, from Wonder Woman #101. 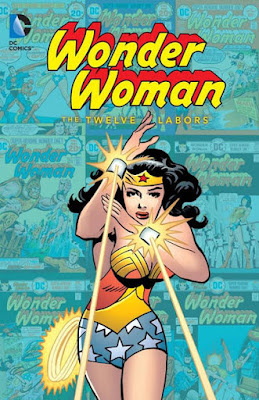 Best of all, you can find all twelve of Diana's labors from Wonder Woman #212 to #222 in the tradepaperback of Wonder Woman: The Twelve Labors from 2012.....and that's the truth.
Posted by Dave's Not Here Comic Blog at 4:11 AM