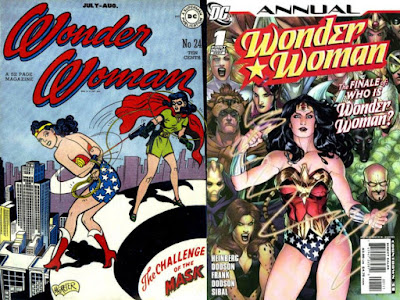 Sometimes, it's the simplest things that stick in our memory....

...that might be the case with Wonder Woman foe, the Mask, as she menaces Wonder Woman on and off for decades, with little more than a domino mask and a gun! 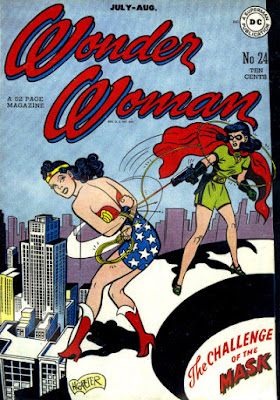 Nina Close premiered in Wonder Woman #24 (July-August, 1947) with "The Challenge Of The Mask" by William Moulton Marston and H. G. Peter (being one of the last Wonder Woman villains created by Wonder Woman's creator).  Nina was a pilot, rescued by Wonder Woman, getting Wonder Woman involved in Nina's life (with her dominating husband, Brutus, who was a big game hunter).  Their marriage was not a happy one, but it got worse, with Brutus being trapped in a mask rigged with an acid drop by a villain called the Mask, and Brutus' freedom being ransomed off.  Wonder Woman tried to catch the Mask at the drop off, only to find the Mask able to steal her Invisible Plane!  Planning revenge against Wonder Woman, the Mask kidnaps Brutus, along with Etta Candy and the Holliday Girls, with Wonder Woman coming to their rescue...to find the Mask (and black wig)....hid Nina Close (who had a breakdown thanks to her husband, and came up with this scheme to get her revenge against him).  Brutus then tried to get Nina help for her actions....and that was the end of the Mask for an era. 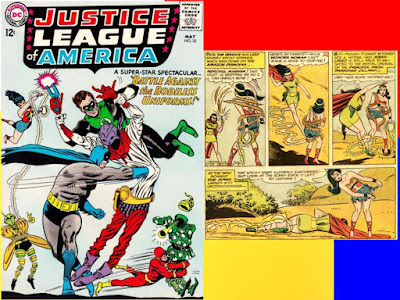 The Mask returned in Justice League of America #35 (May, 1965) in the "Battle Against The Bodiless Uniforms" by Gardner Fox, Mike Sekowsky and Bernard Sachs (though it technically was the Earth-1 Mask, and even then, really only a magical duplicate brought to life by the demons Abnegazar, Rath and Ghast to battle the Justice League (along with Flash rogue Pied Piper, Batman villain Killer Moth, Aquaman menace Dagon and Green Lantern's enemy of Dr. Polaris).   The Mask didn't even make the cover! 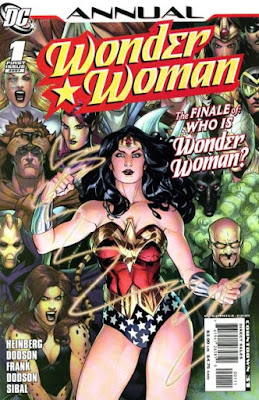 A more recent version of the Mask debuted in Wonder Woman #4 (February, 2007 by Allan Heinberg with Terry and Rachel Dodson) (making the cover of Wonder Woman Annual #1 of 2007 in the upper right hand corner), along with many other Wonder Woman villains re-imagined for a new age.  As Wonder Woman was struggling with her own identity, Nina Close came back as an empowered woman (in an all black outfit, but keeping the domino mask) using the fortune she got from killing her husband to fight for oppressed women everywhere (though her over-aggressive tactics brought her into conflict with the peace loving Wonder Woman, proving violence in and of itself is not the answer....but must also be tempered with kindness and wisdom).
Posted by Dave's Not Here Comic Blog at 4:22 AM