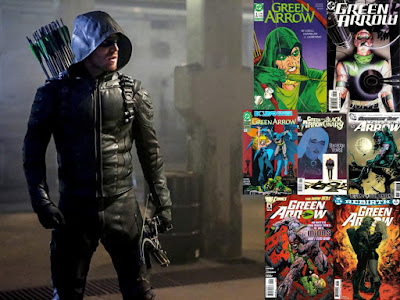 "My name is Oliver Queen.  For five years, I've opened the CW Arrow show that featured a split story, dealing with the present, and flashbacks usually to five years ago, detailing my hell on an island (and so much more).  Ending my fifth season, I have to be more than that, and get ready for a season with instead of in two stories, as one continuous show featuring Green Arrow...."

So, here's a look back at the comic book history (in tandem with the TV show), focusing on Green Arrow #5 issues! 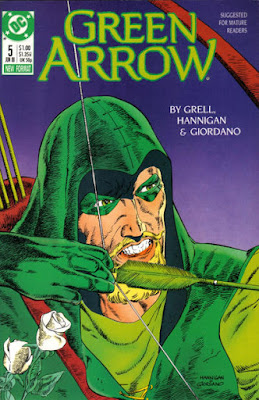 
This series lasted from February, 1988 to November, 1998, and for a time was suggested for mature readers, due to its graphic, realistic storytelling techniques; introducing Shado; and much later in this series, they established the split story technique, with Oliver teaching Connor Hawke archery at a monastery in issues written by Chuck Dixon. 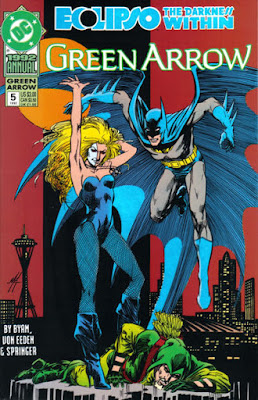 Green Arrow wasn't completely isolated from the DC Universe during his urban hunter phase, even before coming back to the DCU in full force in Green Arrow #81 (December, 1993), having worked with Hal Jordan (but only as Hal, not Green Lantern), the Question, the Warlord, and the Question again (as well as Batman and Black Canary) in his Annuals.  Green Arrow Annual #5 of 1992 by Sarah Byam, Trevor Von Eeden and Frank Springer (with a cover by Mike Grell), had the lunar villain Eclipso possess Black Canary, with Batman and Green Arrow trying to save her (and Black Canary's story continuing into the Eclipso: The Darkness Within annual crossover event of that year).

Green Arrow had seven Annuals from 1988 to 1995, with the last focusing on Ollie's origin on the island, in a story by Chuck Dixon, Rick Burchett, Chris Renaud, Eduardo Barreto and Gerry Fernandez. 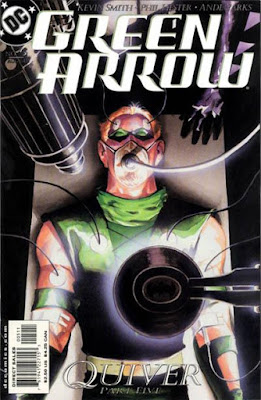 The next Green Arrow #5 is from August, 2001 by Kevin Smith, Phil Hester and Ande Parks, dealing with a storyline, "Quiver", with Ollie returning to life (as he had died during the first regular series run of Green Arrow, to be replaced for a time by Connor Hawke).  This specific issue with a cover by Matt Wagner dealt Batman investigating the resurrected Ollie, Etrigan the Demon looking for the undead Green Arrow, a little of how Ollie got back to life with Hal Jordan (and his then complicated history beyond Green Lantern as Parallax and the Spectre), with Black Canary (Dinah Laurel Lance) and Arsenal (Roy Harper) just looking to reunite with Oliver Queen.

This series lasted from April, 2001 to August, 2007, and carried on the idea of Green Arrow fighting Deathstroke the Terminator (Slade Wilson), that had started in a couple of issues of Ollie's over 130 issue run. 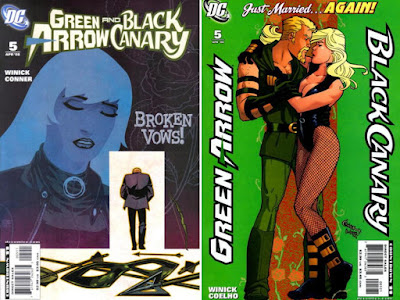 Green Arrow shared cover billing with Black Canary starting in 2007, including with Green Arrow/Black Canary #5 (April, 2008 by Judd Winick and Andre Coelho, with two covers, one by Cliff Chang, the other by Amanda Conner), as the two finally settled their differences and got married.

This series lasted for 29 issues from December, 2007 to April, 2010 (with a few solo Green Arrow issues after the pair split and some machinations of Prometheus).  This series also had Green Arrow and Black Canary face Ra's Al Ghul, and introduced the female archer villain, Cupid, who even attacked archer Merlyn (in issues written by Andrew Kreisberg, who Arrow fans should recognize from the CW show's credits). 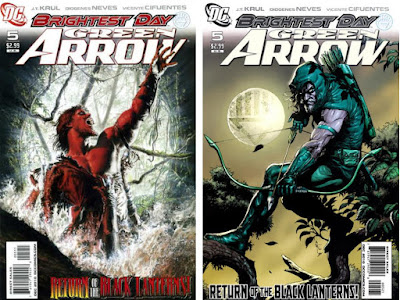 Dealing with events of the Darkest Night and Brightest Day company wide crossovers, Green Arrow #5 (December 2010 by J. T. Krul, Diogenes Neves and Vincente Cifuentes) had Ollie dealing with a Black Lantern resurrected version of his father, Robert Queen, as well as a Star City devastated by a disaster under two covers by Mauro Cascioli and Gary Frank.

This series lasted for 15 issues from August, 2010 to October, 2011, at which point, the entire DC Universe was hit by Flashpoint, changing the characters histories.... 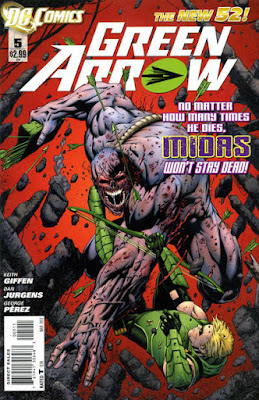 In the DC Universe of the New 52, it was a still rich Oliver Queen fighting as Green Arrow in Green Arrow #5 (March, 2012, by Keith Giffen, Dan Jurgens and Ray McCarthy, and a cover by Jason Fabok), with a Green Arrow who was a little more like the Arrow of the CW Show, working with a tech support crew, but not really having a relationship with Black Canary.


This series lasted 54 issues from November, 2011 to July, 2016, with the introduction of the archer Komodo, as well as a reintroduction of Count Vertigo, as well as eventually having Felicity Smoak and John Diggle be his support team.   This series also sent Ollie back to the island to rediscover himself (though that needed work even beyond what Ollie found....). 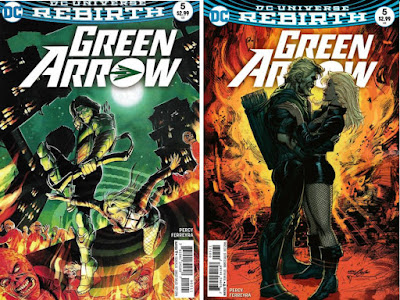 Currently, Green Arrow has a series, spinning out of the DC Universe: Rebirth, with Green Arrow #5 (October, 2016 by Benjamin Percy and Juan Ferreyra, with covers by Juan Ferreyra and Neal Adams), dealing with Ollie and Diggle going to rescue Black Canary from the hell she was trapped in! 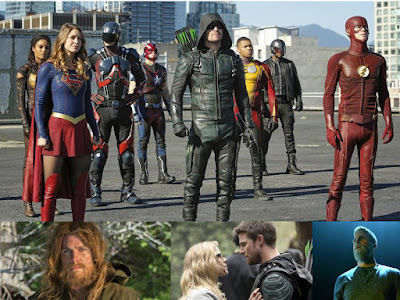 The Rebirth of Green Arrow series started with August, 2016, and runs to this day, restoring Green Arrow and Black Canary's love for each other, as well as bringing back some of Ollie's extensive history....proving no man (or comic series) is an island, and that we all depend on others to help us with our mission through life, a lesson Oliver Queen had to learn on his 5 years on the CW Arrow show (even as that show expanded to include Flash, Legends of Tomorrow and Supergirl and will continue to go on into a sixth season and more).
Posted by Dave's Not Here Comic Blog at 4:11 AM