DC Heroes War Against The Giants 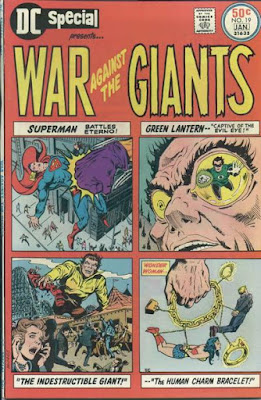 It's a giant issue, but not an DC Giant. 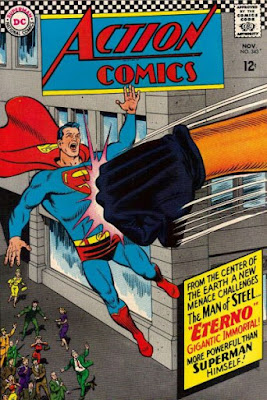 Superman faces "Eterno The Immortal" in Action Comics #343 (November, 1966) in a story by writer Jim Shooter and artist Wayne Boring (under a cover by Curt Swan and George Klein).


The Superman Revenge Squad releases the giant android, Eterno, from his underground prison of the element, absorbium (created by an alien race, the Xan), to bedevil Superman in the city of Metropolis, bringing doomsday to where Superman lives.  The two powerhouses battle, until Eterno finds out he was manipulated by the Superman Revenge Squad, then he attacks them.  Trying to stop him, the Squad makes more absorbium, stopping Eterno (as Eterno stopped them!). 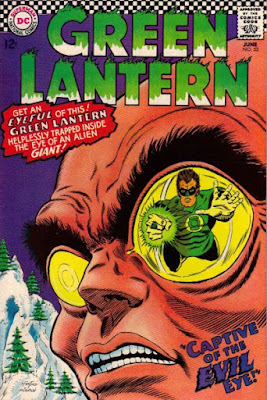 Green Lantern Hal Jordan becomes a "Captive Of The Evil Eye" in Green Lantern #53 (June, 1967), in an issue by writer John Broome and artist Gil Kane (with Flash artists, Carmine Infantino and Murphy Anderson providing the cover for this issue!).


Hal Jordan found himself a new job (after having given up his time as a test pilot), becoming an insurance adjuster, heading up to the site of a crashing meteor.  When Hal arrives there, he finds the giant alien, Thotan, who was inhaling Earth's oxygen (with the plans to take the air back to his homeworld).  Green Lantern battles the alien, even getting sucked up inside of him, until Hal comes up with the idea of facing his foe on his own terms, using his Power Ring to grow to giant size to face the alien. 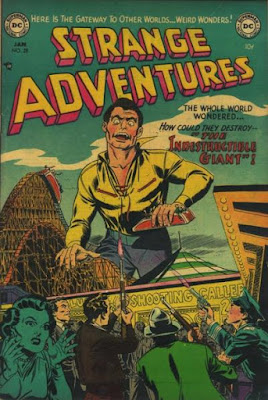 
For a time, Earth had few super heroes protecting it, and faced strange, alien menaces, and relied on us tricky humans to protect it from threats from beyond!

There was a little surprise awaiting the people that defeated this monster after all his confused destruction.... 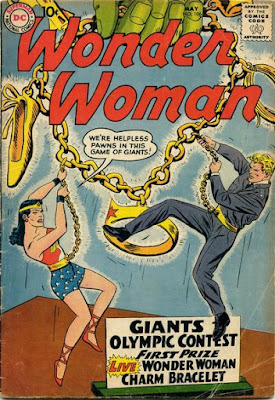 Wonder Woman was just like any other girl, and liked a charm bracelet, until she and Steve Trevor ended up as part of "The Human Charm Bracelet" in Wonder Woman #106 (May, 1959) by writer Robert Kanigher, penciller Ross Andru and inker Mike Esposito (with Andru and Esposito providing the cover to the original issue).


The alien giant Tooroo wanted to impress his girlfriend, the giant Rikkaa, so he got her a charm bracelet...but, it happened to include Wonder Woman, Steve Trevor, Wonder Woman's lasso, tiara and invisible plane!  To get free, Wonder Woman challenges the giant to three contests, and, by winning them, is able to get herself, Steve and her belongings returned to Earth (and a pledge that these aliens would leave Earth alone....).
Posted by Dave's Not Here Comic Blog at 4:22 AM