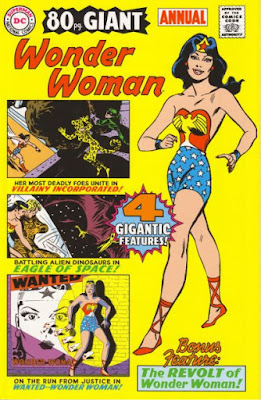 To be honest, Wonder Woman didn't have either an 80 Page Giant or an Annual back in the Silver Age, but that was a problem rectified in February of 2003, when DC put out a faux Silver Age Wonder Woman 80-Page Giant....


Here are the stories represented in this book... 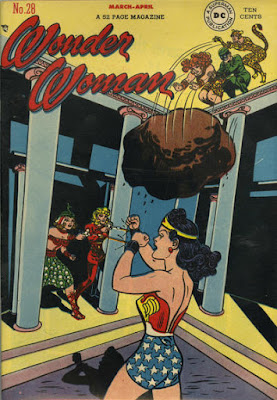 First up is Wonder Woman #28 (March-April, 1948) with the three part introduction of "Villainy, Incorporated" by Joye Hummel and  H. G. Peter (though the writing was originally credited to Wonder Woman creator William Moulton Marston, who passed away on May 2nd, 1947, at least part of the tale was written by Marston's wife, Joye).


Villainy, Incorporated was a Golden Age gathering of the worst of Wonder Woman's villains from previous issues, freed from their prisons on Paradise Island by Eviless (who originally appeared first in Wonder Woman #10 of Fall, 1944) to menace Wonder Woman and her mother, Queen Hippolyte. 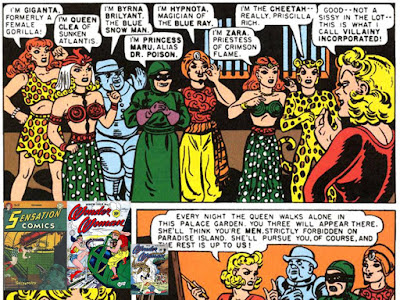 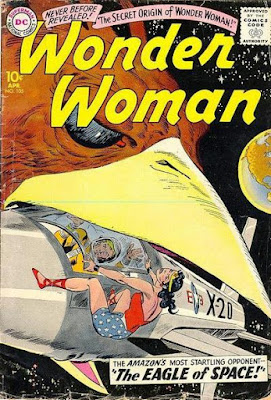 Wonder Woman encountered dinosaurs and more, helping out Steve Trevor, as he checked out missing Mars rockets in Wonder Woman #105 (April, 1959) in the "Eagle Of Space" by Robert Kanigher, Ross Andru and Mike Esposito, finding himself in trouble again (a pretty common occurrence at this time for the Air Force man!).


The dinosaurs were alive and well at the moon of Titan (in Saturn's orbit), with Wonder Woman helping out the primitive humans there before Steve and the Amazon Princess left the moon in Wonder Woman's Invisible Jet.... 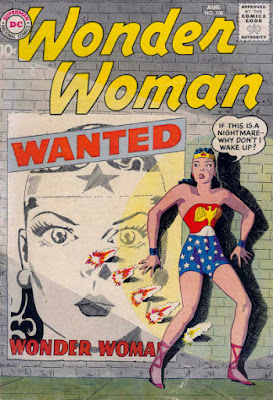 Under this incredible cover by Ross Andru and Mike Esposito lurked the story of "Wanted -- Wonder Woman" from Wonder Woman #108 (August, 1959) by Robert Kanigher, and art by Andru and Esposito.

Aliens came to take over the world, but first, they used their mind control abilities to take over Wonder Woman and have the Amazing Amazon commit crimes to undermine our nations faith in this powerful princess...

...while they were successful, they didn't count on Wonder Woman following them into space and causing trouble for the aliens while they were away from Earth, thwarting their invasion plans. 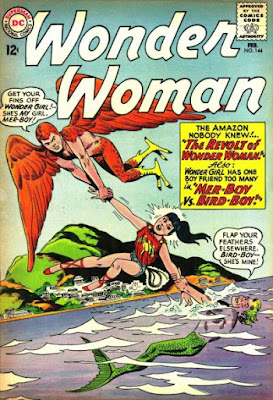 Last, but not least is a tale definitely from the Silver Age, with the "Revolt Of The Wonder Woman" from Wonder Woman #144 (February, 1964) by Robert Kanigher, Ross Andru and Mike Esposito.

This story features Wonder Woman's fear of losing her humanity, as she feels the world only notices her for her fighting prowess, so Wonder Woman gives up rescuing people for a while.

At least until a young blind girl, Mary Jane, finds her, befriending Wonder Woman in her time of need (not knowing that she is Wonder Woman).  Fate conspires to put the girl in danger, with Wonder Woman saving her, but still treating Wonder Woman as her friend, restoring the Princess' faith in humanity!
Posted by Dave's Not Here Comic Blog at 4:45 AM