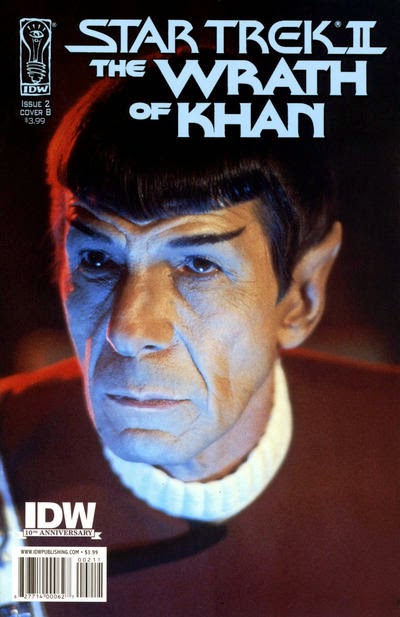 "None that I'm conscious of....save, perhaps, for happy birthday."

-Kirk and Spock exchange from Star Trek II: The Wrath of Khan

With this, it's time to take a look back at a little of the best and worst of Spock's covers on Star Trek comics, to best remember Leonard Nimoy on his birthday. 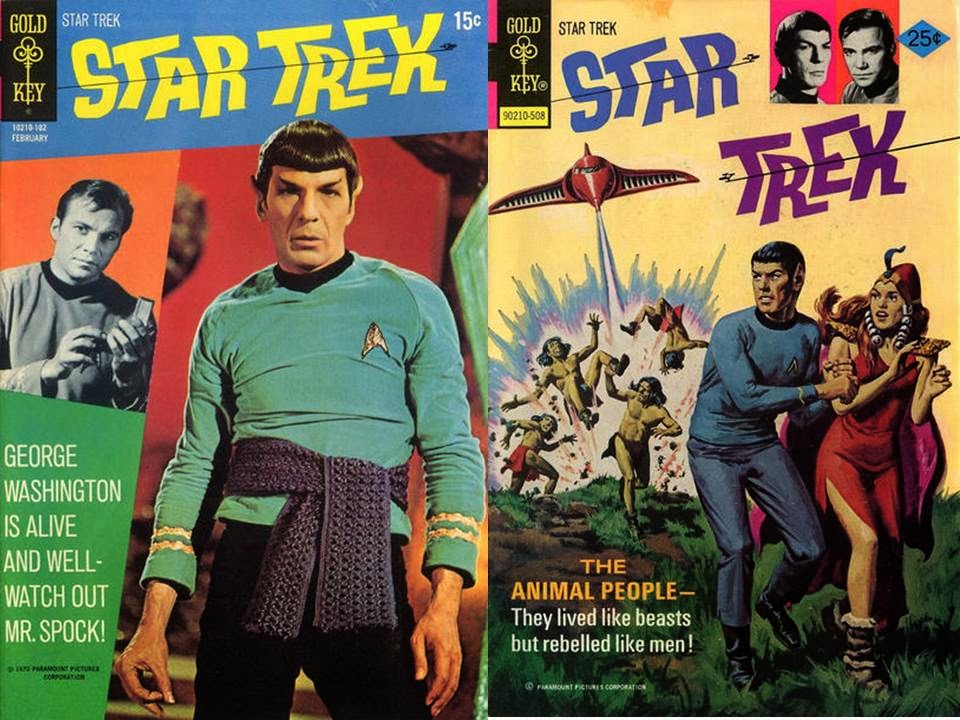 Marvel adapted Star Trek: The Motion Picture over the first three issues, and continued on from their with 18 issues from April, 1980 to February, 1982. 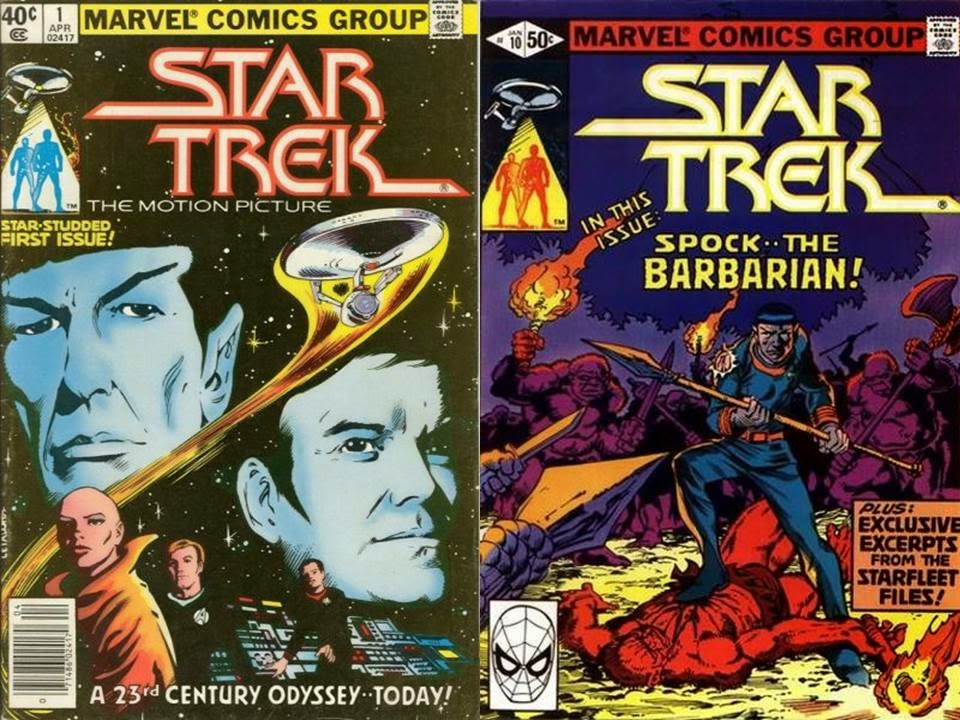 Picking up after Star Trek II: The Wrath of Khan, DC's first Star Trek series, lasting 56 issues from February, 1984 to November, 1988.  Probably the best, mixing the movie and TV eras, with 3 Annuals as well, and having a lot of fun with the mythos. 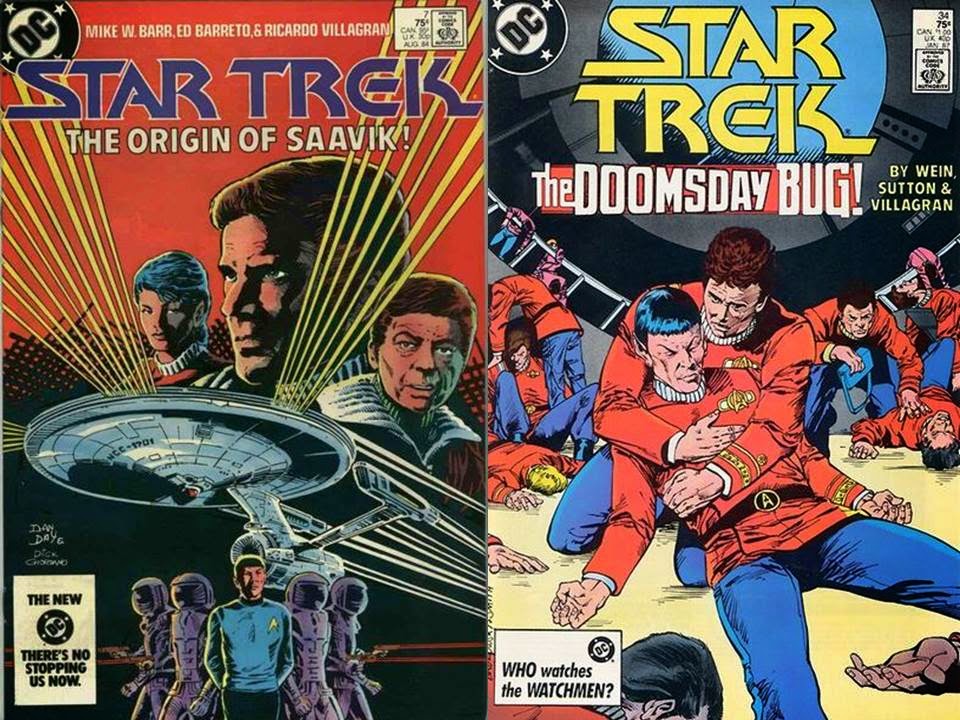 DC Comics Who's Who in Star Trek

Covering characters from the TV Show, the Animated Series, the comics and the movies, all you needed to know about Star Trek (up to that time); two issues, the one featuring Spock here, and came out in 1987. 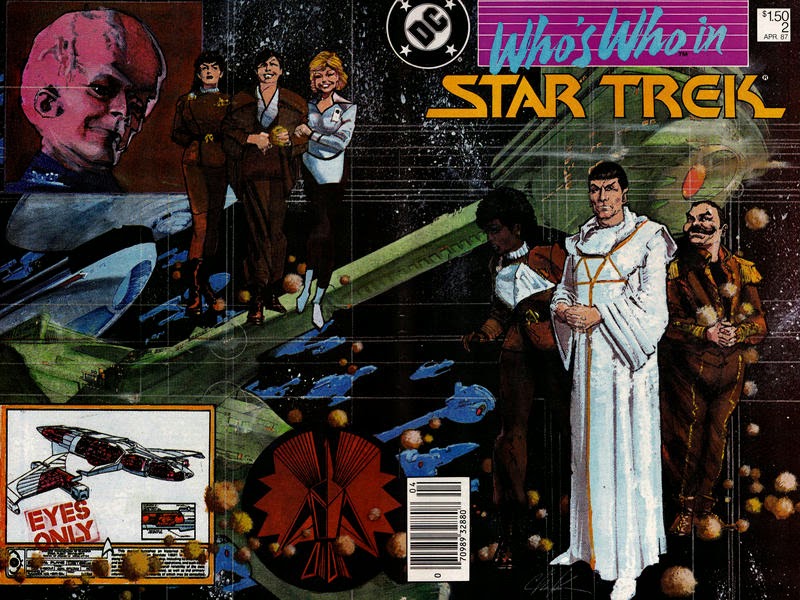 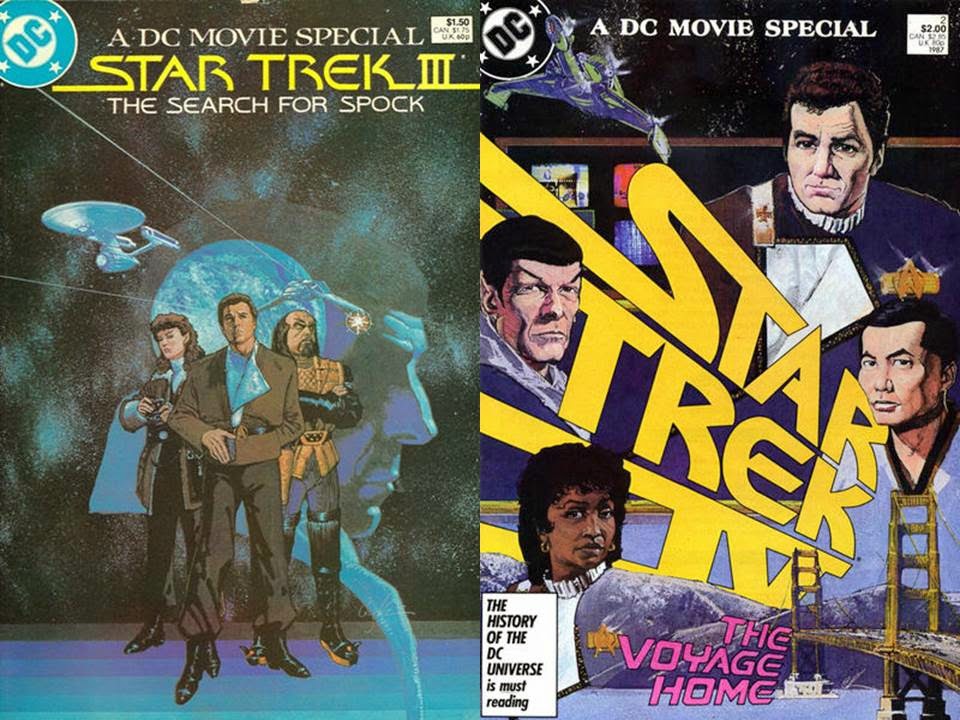 DC's adaptations of Star Trek V: The Final Frontier in 1989, and the last voyage of the original crew in Star Trek VI: The Undiscovered Country in 1992. 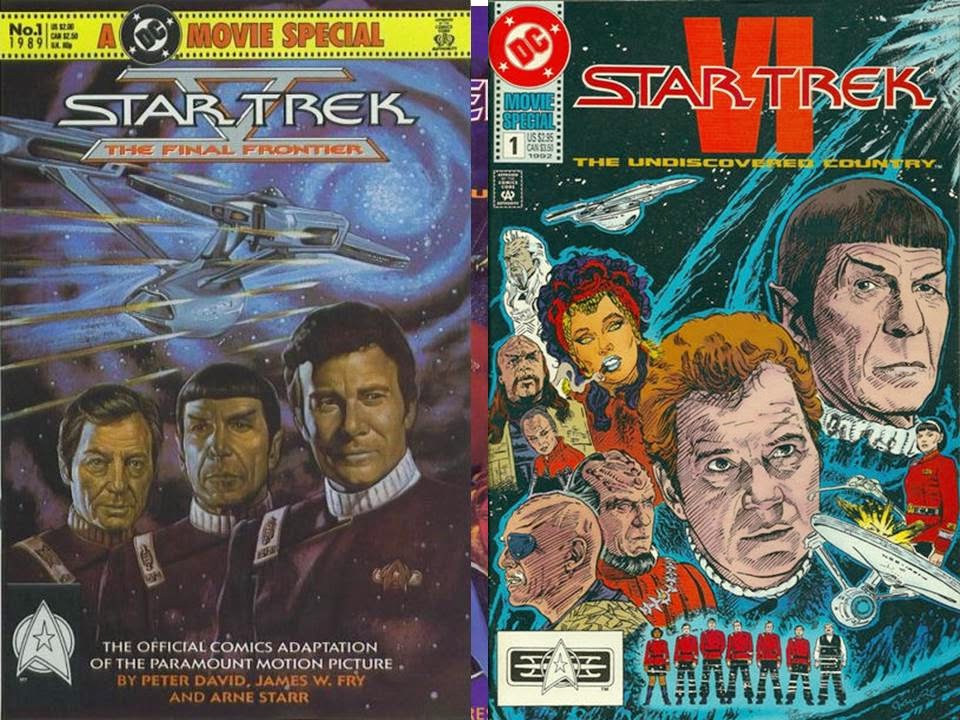 The longest running Star Trek comic series, with 80 issues from October, 1989 to February, 1996....starting in the movie continuity, and heading back to pre-original series stories at the end (and having 6 Annuals of its own). 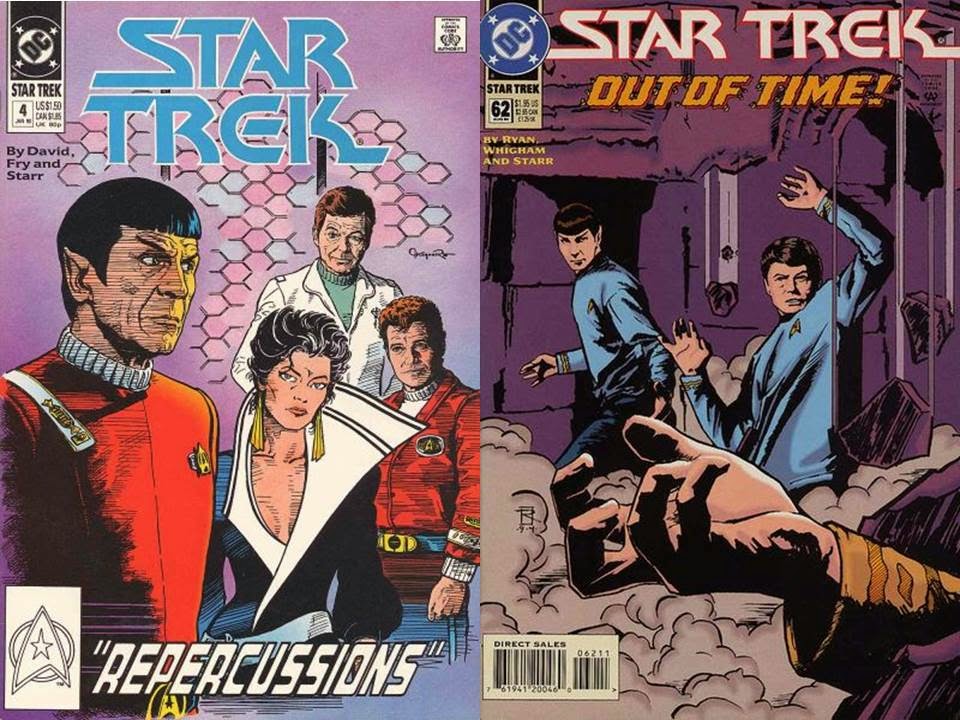 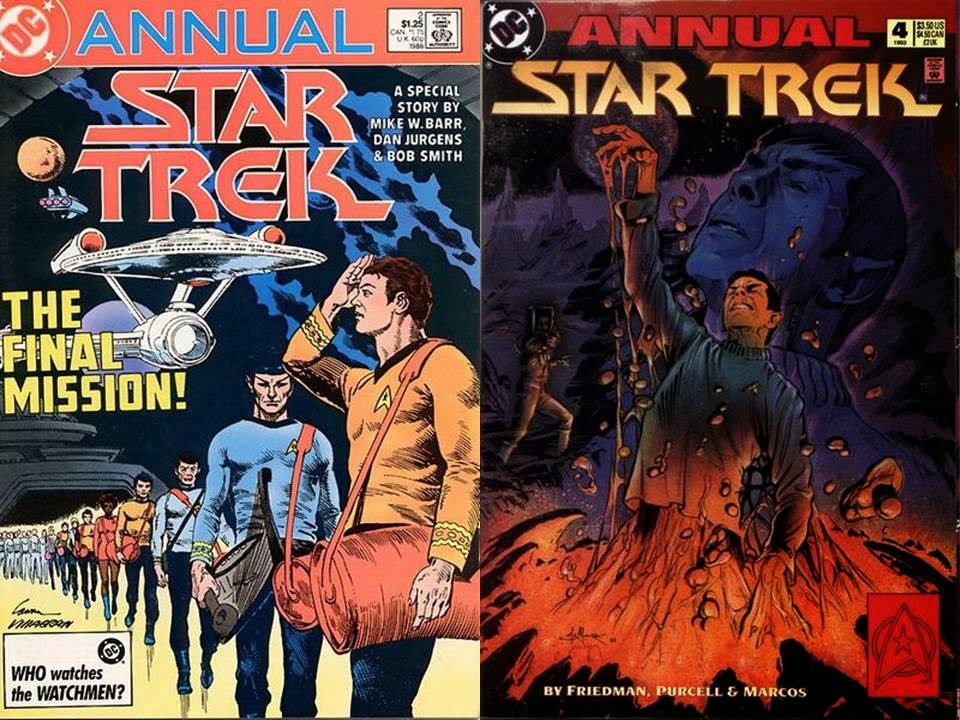 DC Comics Spock in Next Generation 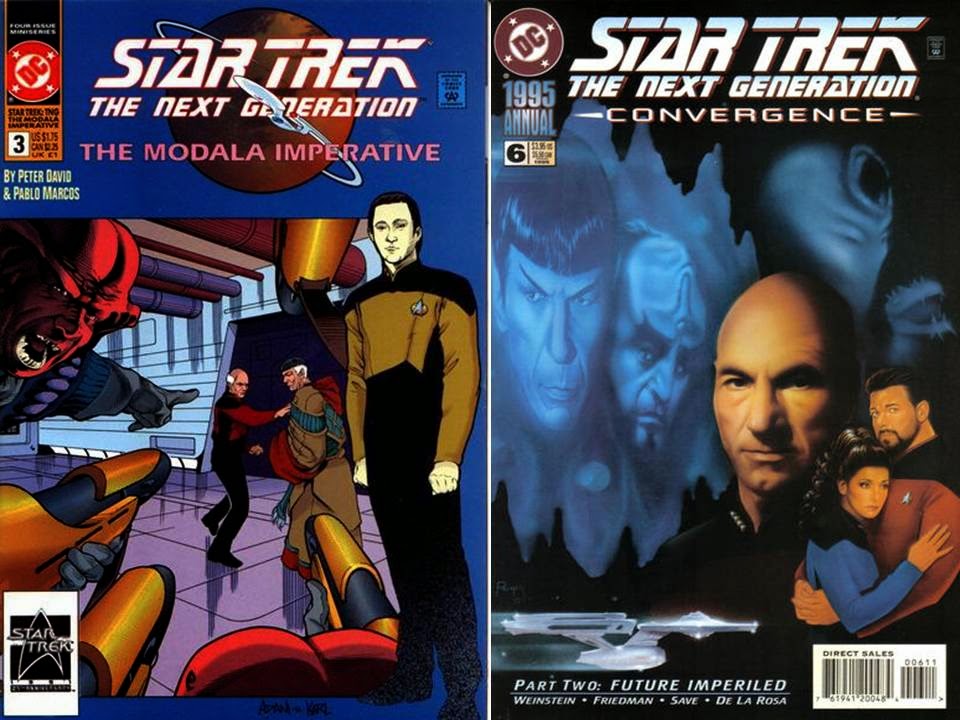 Marvel got Star Trek back in 1996, and chose to focus on other eras of Star Trek (like Deep Space Nine) than the original (though they did have Star Trek Unlimited, 10 issues focusing on the original and Next Generation), but did have Star Trek: Starfleet Academy for 20 issues from December, 1996 to June, 1998, and had Ambassador Spock in one issue, and Star Trek: Early Voyages, 17 issues from February, 1997 to June, 1998, which focused on Spock's days on the Enterprise with Captain Pike all under Marvel's Paramount Comics banner. 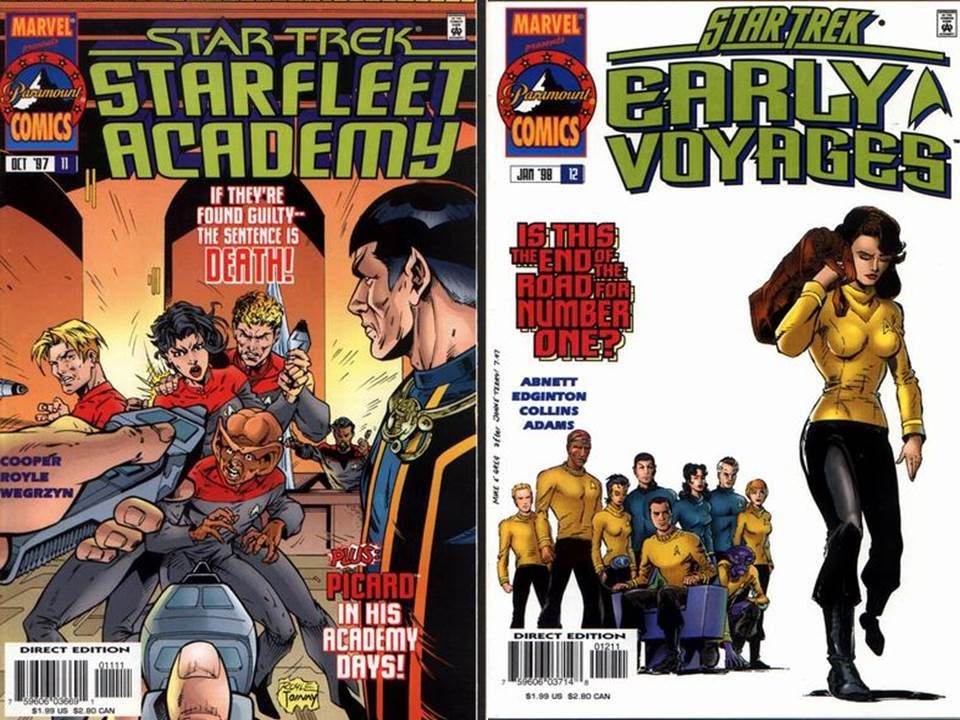 DC got Star Trek back again under it's Wildstorm label in 2000, and tried more of a mini-series approach, focusing on all the eras (mostly Next Generation and Voyager), keeping them mostly separate, but in various short runs.  Of particular note was a Spock/Sarek story in 2001's Star Trek: Enter the Wolves, dealing with the Cardassians, closer to the Next Generation era. 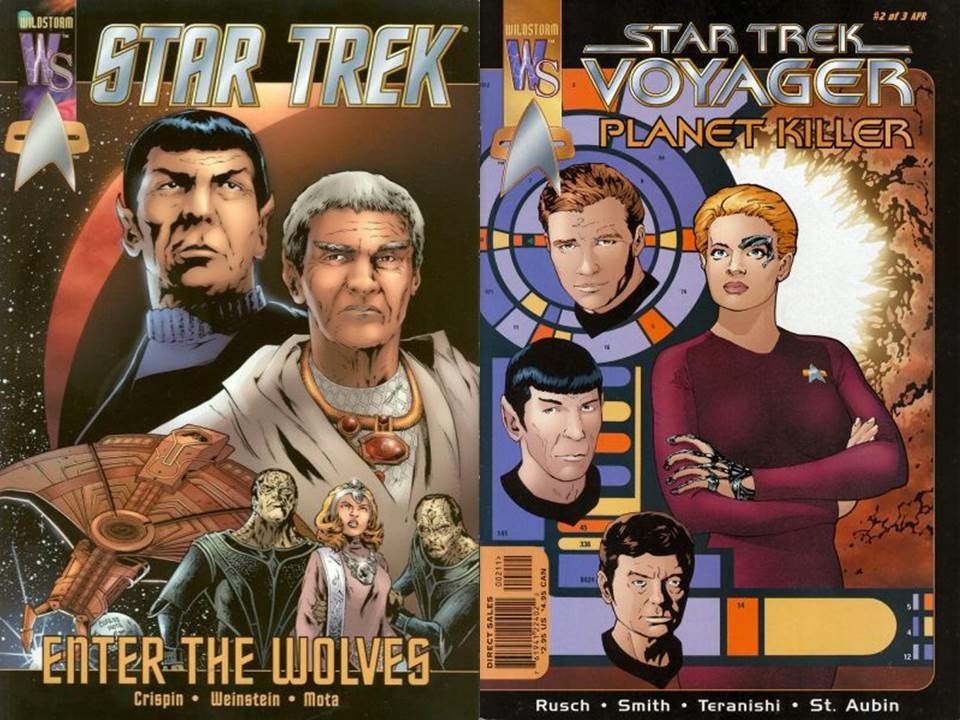 In 2007, IDW took on the original Enterprise crew....and gave us alien spotlights as well. 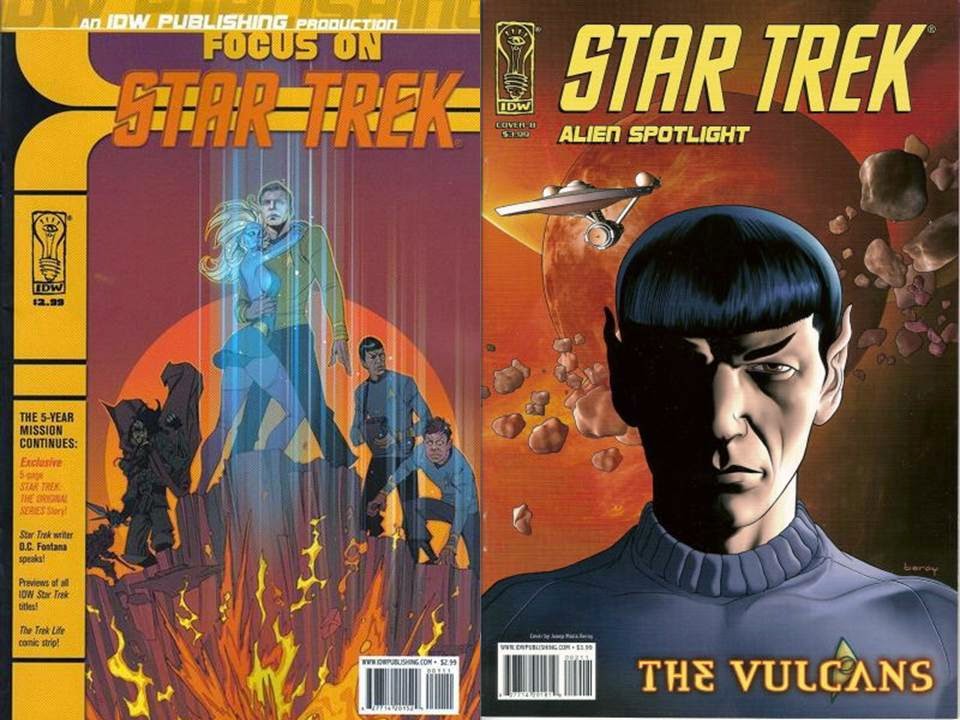 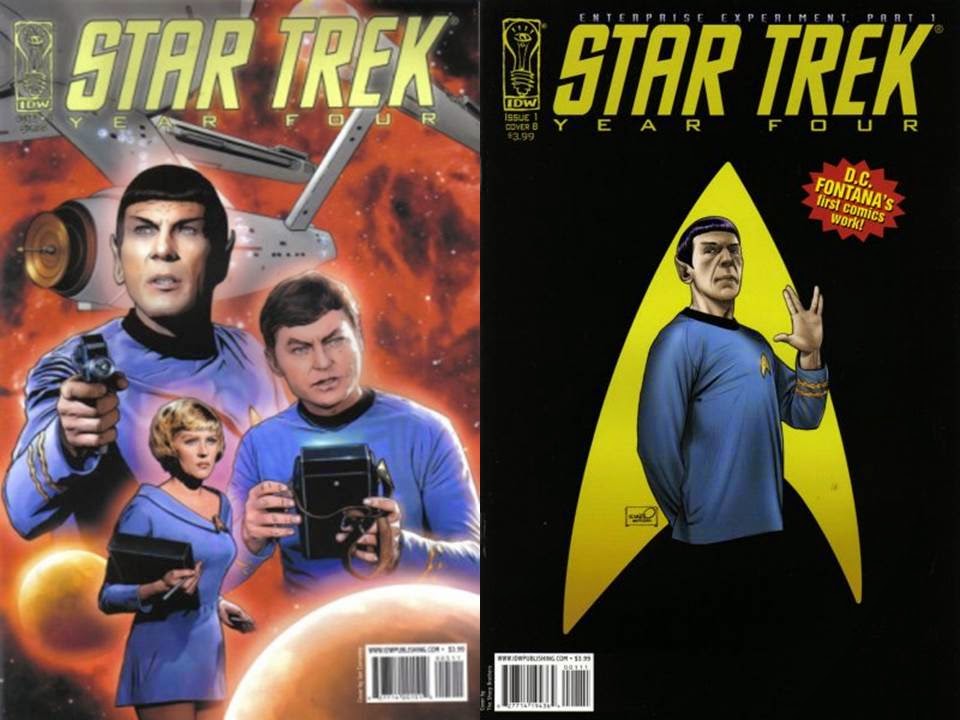 IDW gave a 4 issue prequel to the 2009 Star Trek movie (which had Leonard Nimoy as Spock), as well as Star Trek: Mission's End, a five issue series from March, 2009 to July, 2009, featuring an ending to the original crew's original 5 year mission (and IDW has many other fine Star Trek comics as well!). 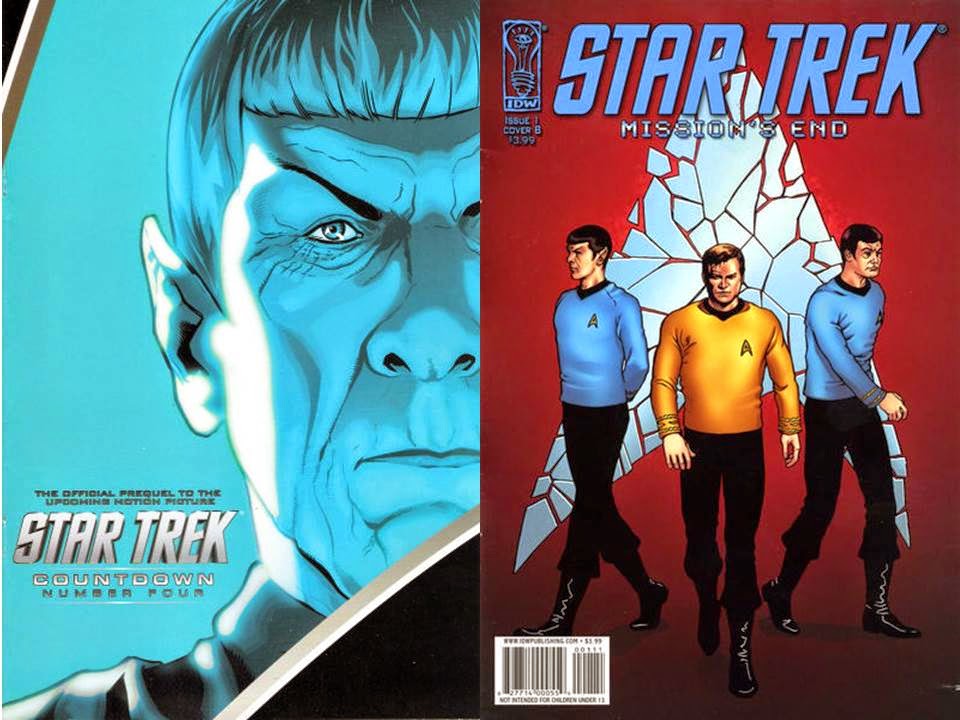 IDW focused on the many eras of Spock for 4 issues of Star Trek: Spock: Reflections from July, 2009 to October, 2009. 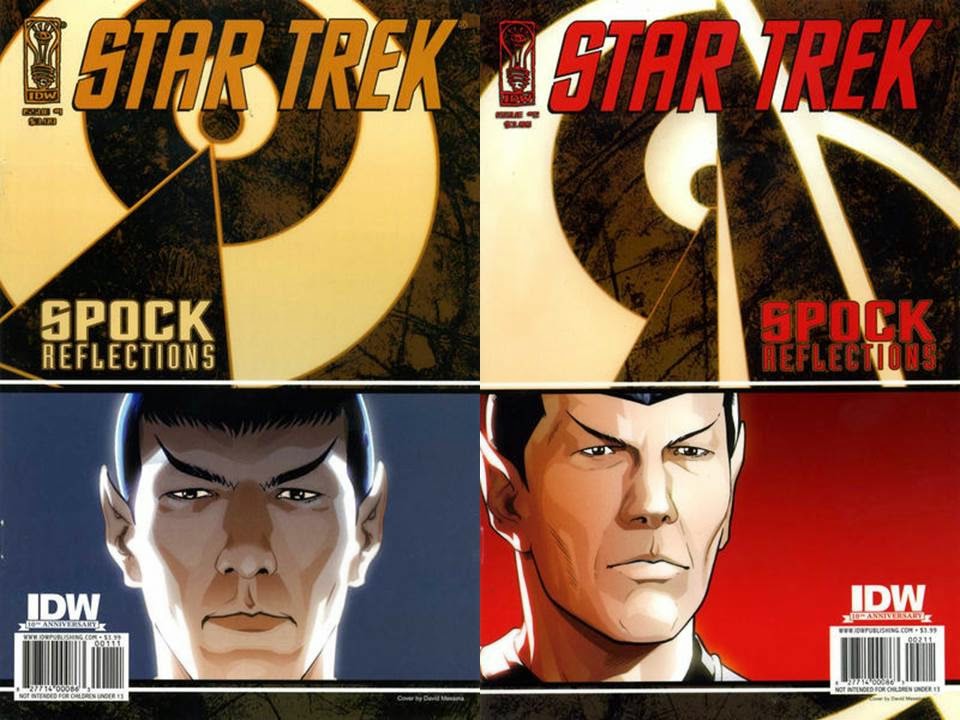 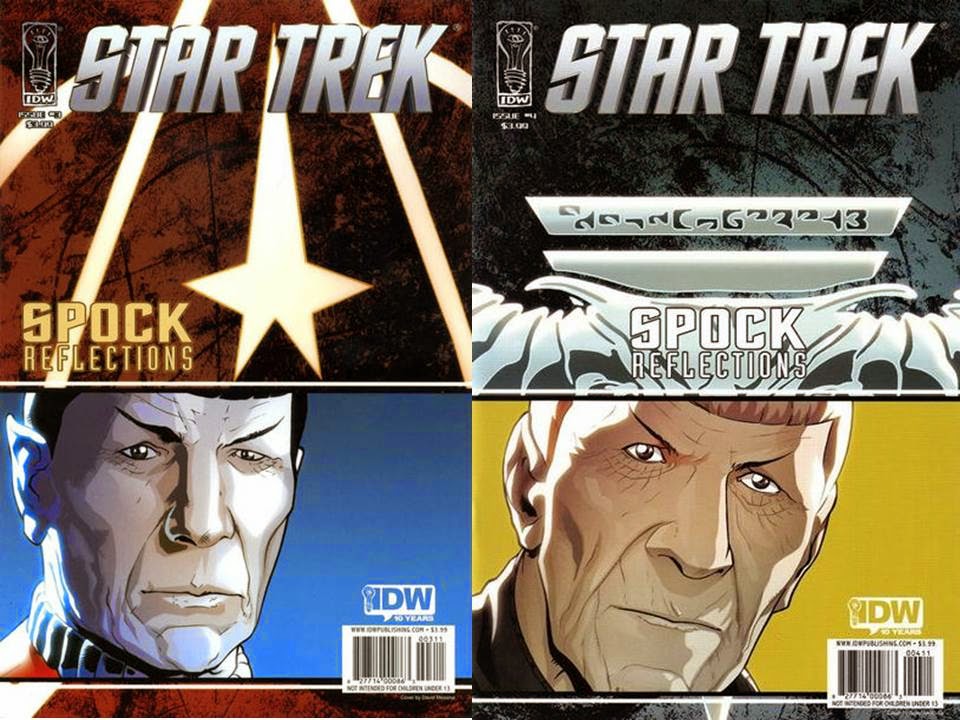 IDW finally gives us a comic adaptation of Star Trek II: The Wrath of Khan with 3 issues in 2009, and continues boldly going where no man...no one...has gone before! 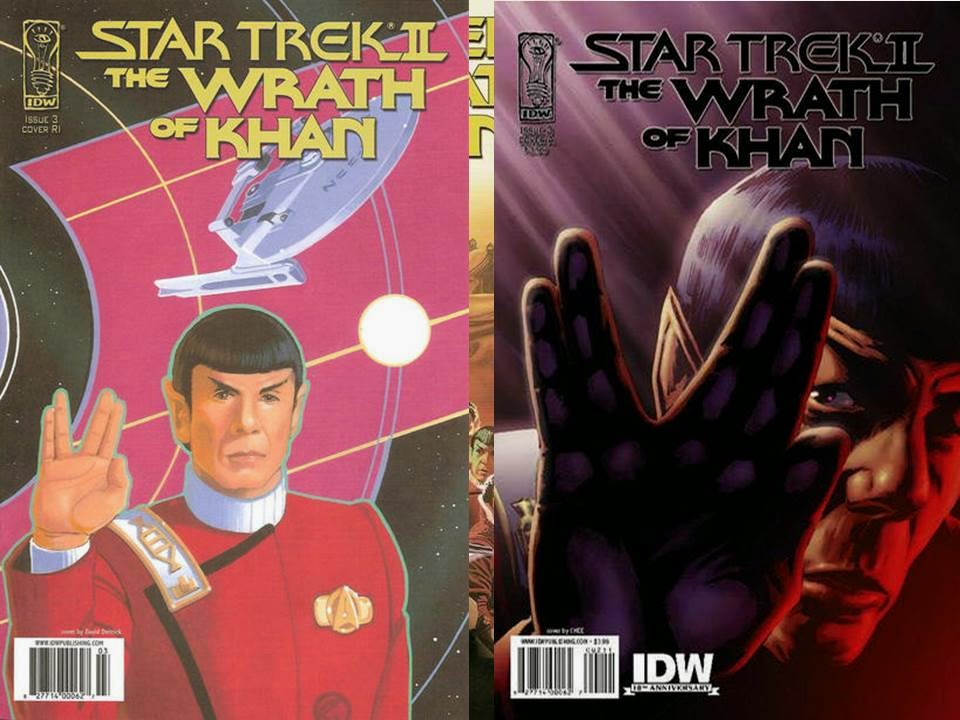 Another exchange from Star Trek II: The Wrath of Khan...Dr. McCoy and Admiral Kirk, talking about the passage of Spock.... 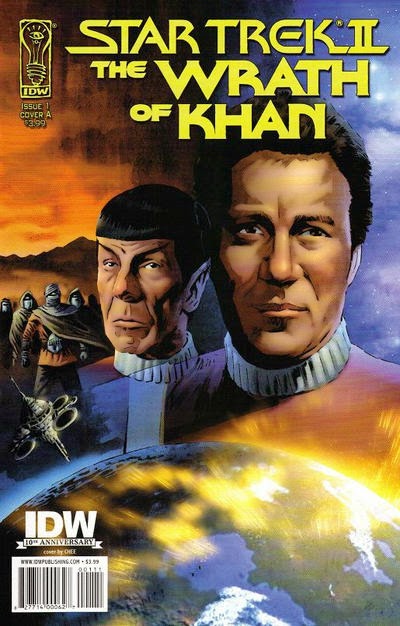 "He's not really dead.  As long as we remember him."