Avengers vs the X-Men The Early Years 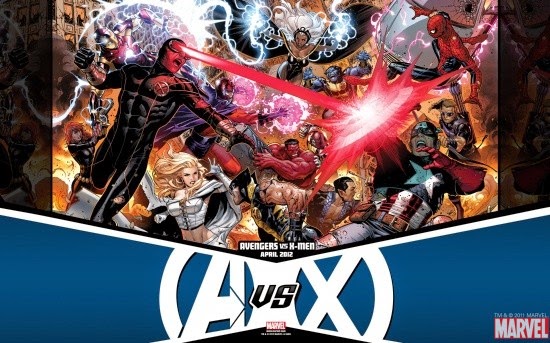 Yes, the Avengers, Earth’s Mightiest Heroes, and the X-Men, the Mutant Protectors of Mankind, faced off again in Avengers vs. X-Men.

But, where did all this animosity start? 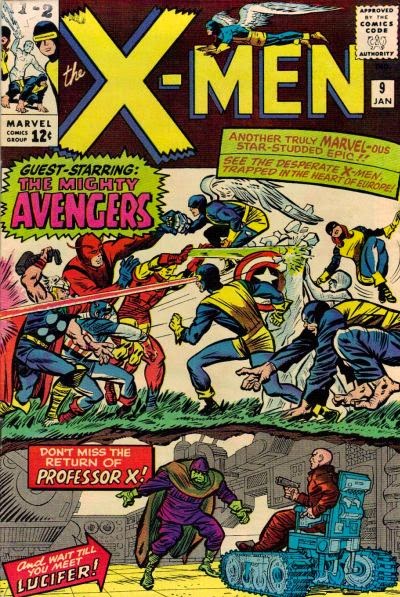 Well, the first X-Men/Avengers battle took place in Uncanny X-Men #9 (January 1965, by Stan Lee and Jack Kirby).  In “Enter: The Avengers”, evil alien Lucifer manipulates the X-Men (Cyclops, Angel, Iceman, Marvel Girl and the Beast) into battling the Avengers (Thor, Giant-Man, Wasp, Iron Man and Captain America – soon after Avengers #10 but it wasn’t a crossover) by capturing Professor X and threatening a Balkan village with a bomb set to go off if Lucifer’s heart stops.

The X-Men defeat Lucifer’s plan when Professor X telepathically tells Thor of the problems and Cyclops and the Professor stop the bomb.

This story has been reprinted a few times, including in X-Men Annual #1, Marvel Masterworks #3 and as a stand alone Marvel Milestone Edition. 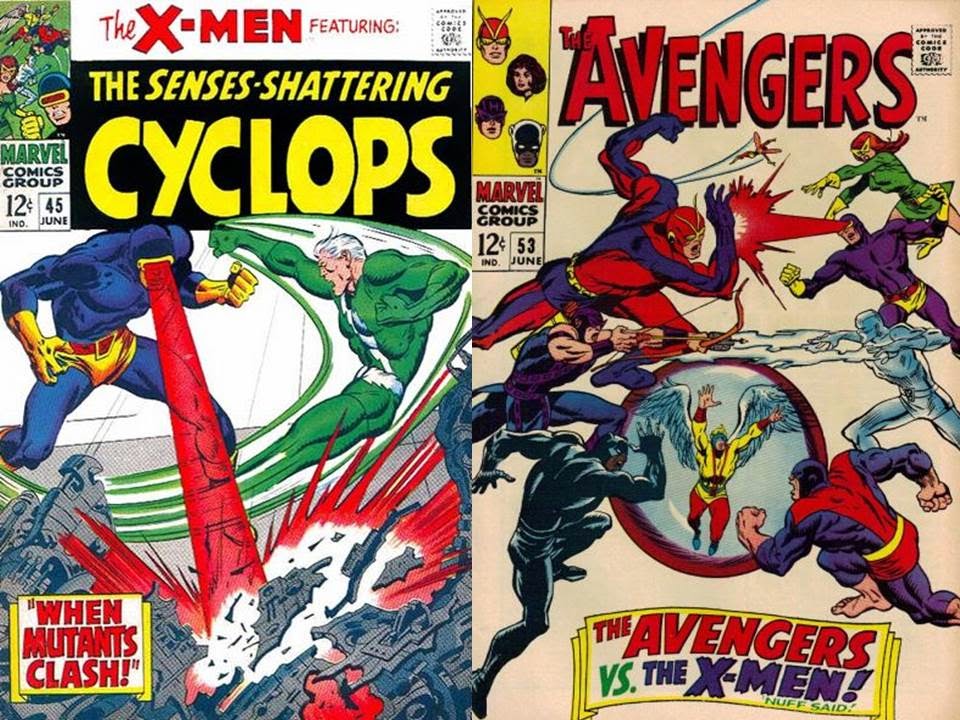 Next, in X-Men #45 (June 1968, by Gary Friedrich and John Buscema) and Avengers #53 (also June 1968, by Roy Thomas and John Buscema), ex-Avengers at the time Quicksilver and the Scarlet Witch have rejoined Magneto’s Brotherhood of Evil Mutants to try to get a country for mutantkind.  Cyclops refuses to join, knocks out Quicksilver, which is misinterpreted by arriving Avengers (Goliath, Wasp, Hawkeye and Black Panther), and, with assistance from Magneto’s mind powers, get Cyclops and the rest of the X-Men (Beast, Iceman and Marvel Girl) to fight the Avengers.  Angel stops Magneto’s plan, and the two heroic teams unite to stop the Brotherhood, but the Brotherhood members (Magneto, the Toad, Quicksilver and the Scarlet Witch) all escape.  These tales have been presented again, in Marvel Masterworks #48 & #70, as well as other places including Marvel Essentials Classic X-Men Volume #2. 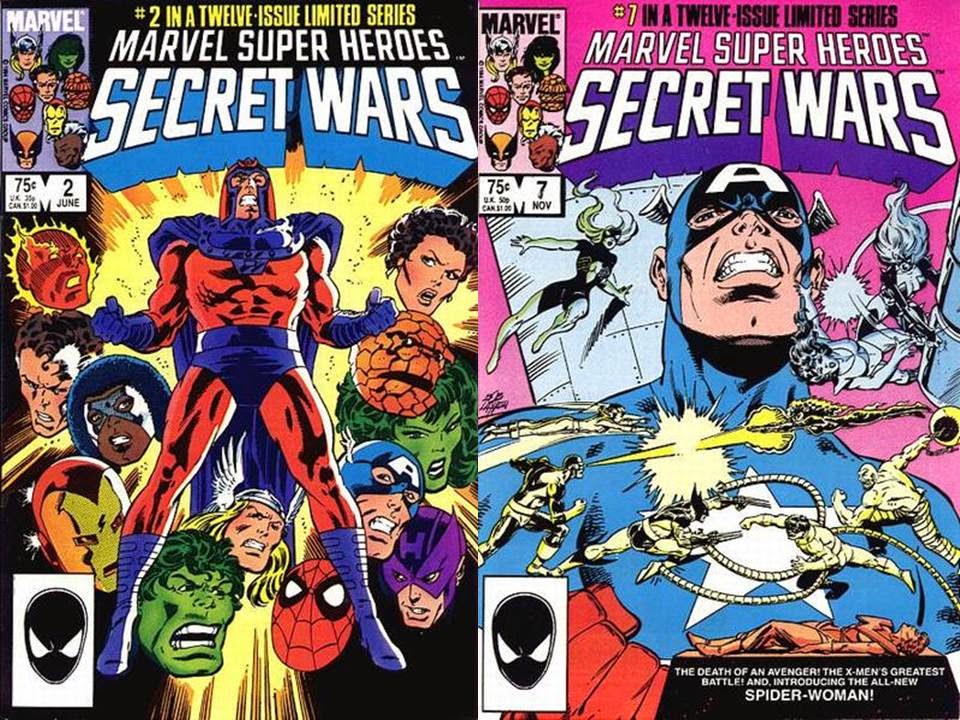 In Marvel Super-Heroes Secret Wars #1-12 (in 1984/1985, by Jim Shooter, Mike Zeck and Bob Layton), the Beyonder pits what he considers to be heroes versus the villains.  Oddly enough, he places Magneto with the heroes, which leads to a rift for a time amongst the Avengers (current team of Thor, Wasp, Captain America, Hawkeye, She-Hulk and Captain Marvel, ex-Avenger Hulk, and future Avengers Iron Man/James Rhodes, Mr. Fantastic, the Thing and Spider-Man) and the X-Men (Professor X, Cyclops, Wolverine, Colossus, Nightcrawler, Storm and Rogue). 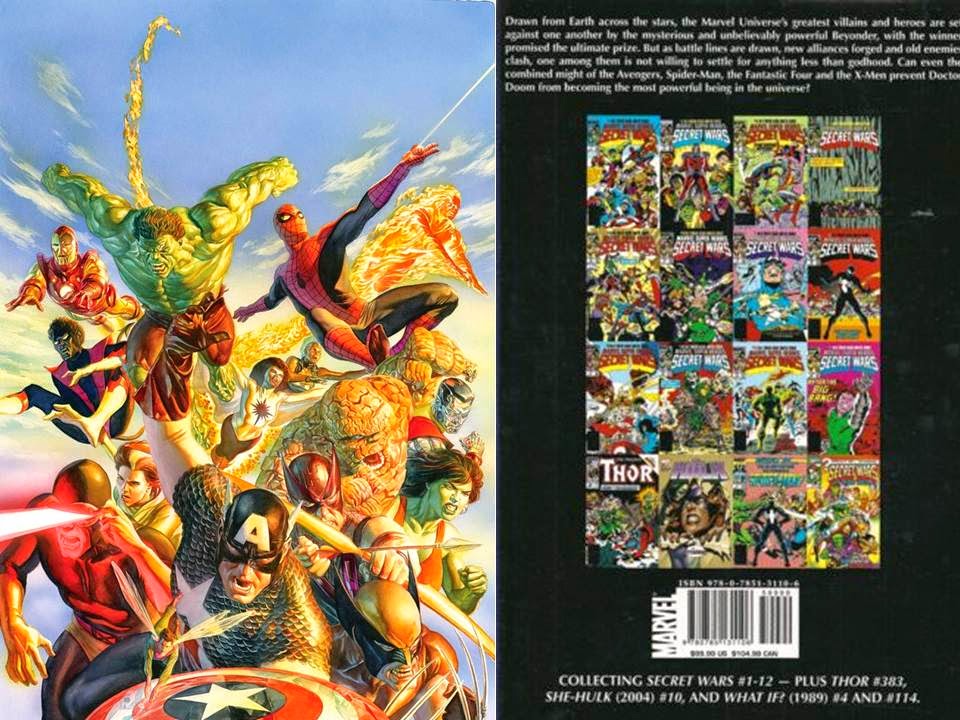 The groups eventually resolve their problems, and get off the alien world the Beyonder transported them to after a few battles with Galactus, Molecule Man and Dr. Doom (not to mention Spider-Man getting an alien costume during this event…and a few other things happening as well).

This universe altering mini-series has been reprinted in tradepaperback a few times so it can be read as one large graphic novel. 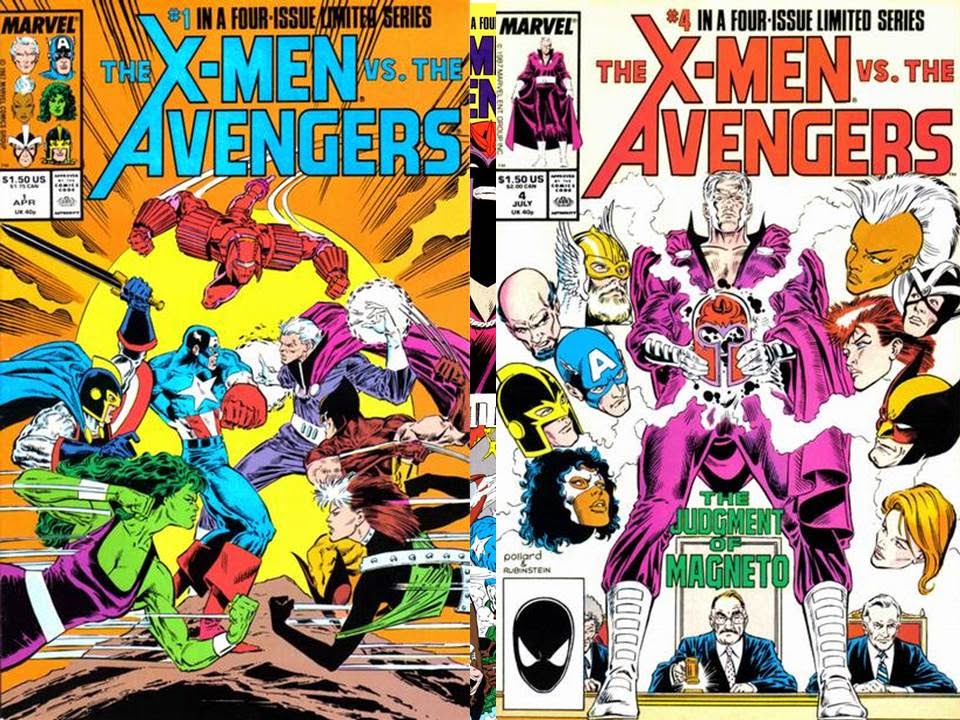 Based on their time on the Beyonder’s World, Magneto does join the X-Men for a time.  Magneto’s joining the X-Men leads eventually to the X-Men Vs. The Avengers mini-series (in 1987, by Roger Stern, Marc Silvestri and Keith Pollard), where the Avengers (Thor, Captain America, Black Knight, She-Hulk and Dr. Druid) battle the X-Men (Havok, Wolverine, Storm, Rogue, Dazzler and now member Magneto) and the Soviet Super-Soldiers (Darkstar, Ursa Major, Vanguard, Titanium Man and Crimson Dynamo) as Magneto must again go on trial for the crimes he had committed. 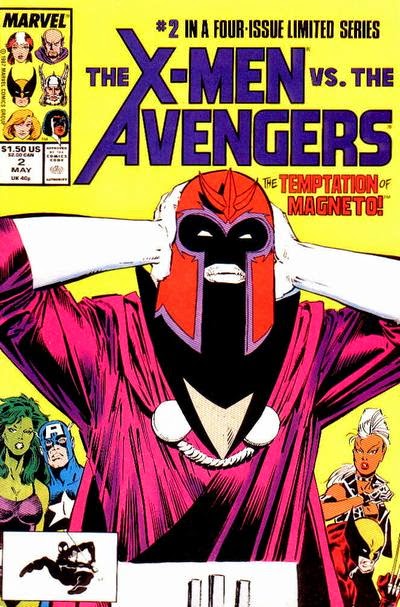 Magneto is attempting to retrieve items from his crashing headquarters Asteroid M, and the Avengers and Soviets plan to stop and capture him.

Magneto’s capture and new trial results in him being cleared of all charges (which he ensures with a little help from the device he retrieved, which allowed him to manipulate the minds of the court), but his being freed only worsens things for mutantkind.

(This, along with Uncanny X-Men #9 was collected in a hardcover recently….). 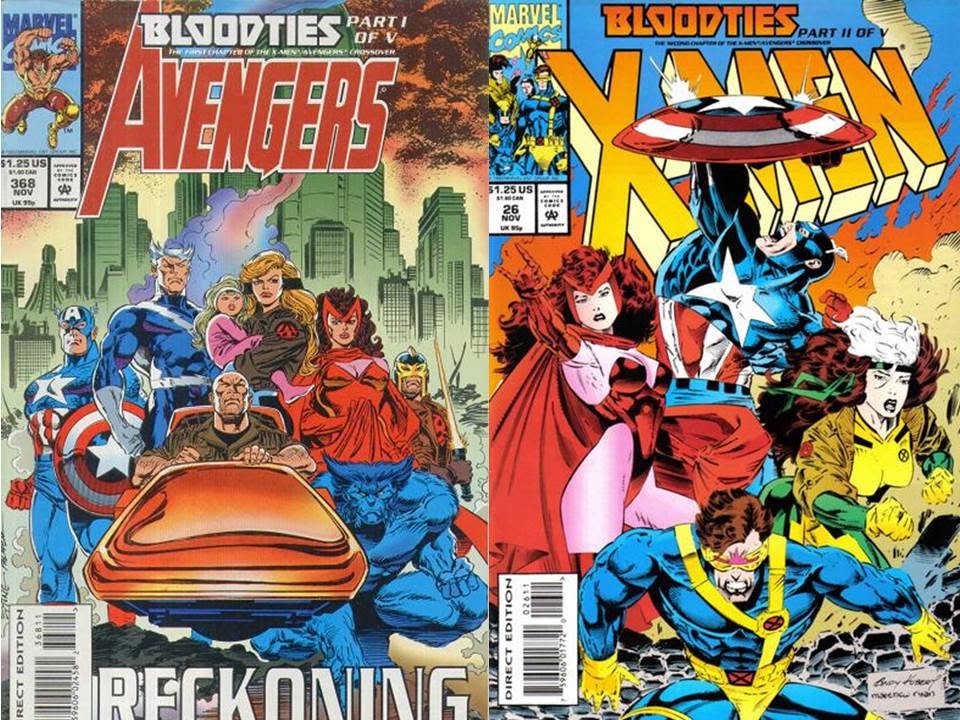 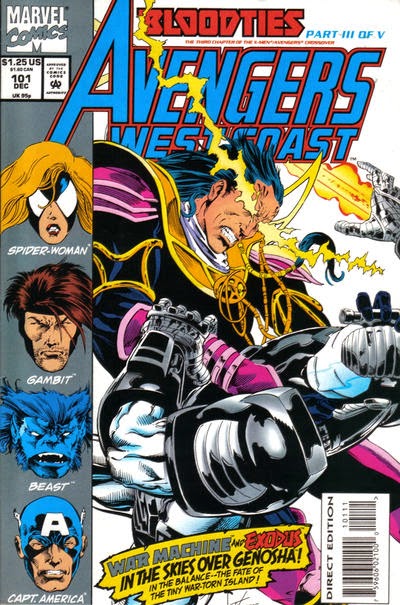 Though Magneto was not involved, it involves the country of Genosha, which was to be the mutant safe haven and a few mutants acting in Magneto’s name.  Avengers (Black Knight, Black Widow, Captain America, Crystal, Giant-Man, Hawkeye, Quicksilver, Scarlet Witch, Sersi, Spider-Woman, USAgent, Vision and War Machine) and X-Men (Archangel, Beast, Bishop, Cyclops, Gambit, Iceman, Jean Grey, Rogue and Professor X) battle for a time, and then work together against the villains causing all the calamity…Fabian Cortez, Exodus and the Unforgiven.

All this angst does little to help the mutant cause or the X-Men, and this is the final straw that created rifts within the Avengers’ teams, and help to end the West Coast branch of the Avengers (which, for a time, Quicksilver wanted, when he had turned against the Avengers for a time).  But, all this also pushed Quicksilver and his estranged wife, the Inhuman Avenger Crystal towards another once again, for their sake, and the sake of their human daughter Luna (which Exodus wanted to kill…as he found it an affront that a child of a mutant and Inhuman would be…normal!). 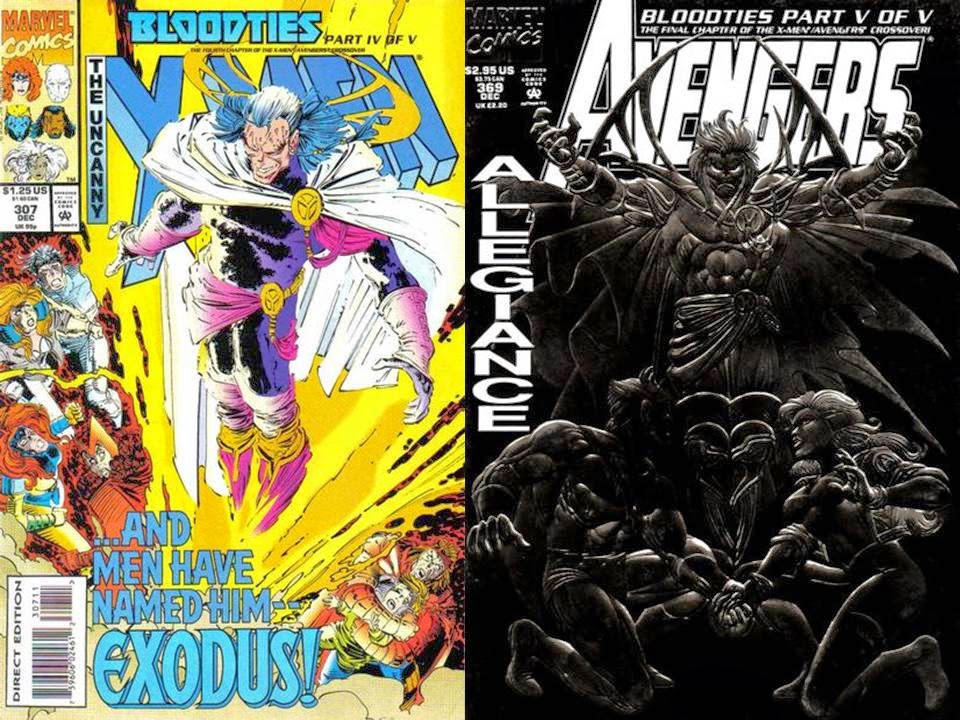 This saga also just came out in a hardcover collection for those who would thrill to this adventure, though you’d hardly know the titles were crossing over by the art on the covers…that was left to the overhyped type on the cover, and Avengers #369 was silver foiled…

....a cover enhancement that made the cover unviewable!

The Heart Of It All 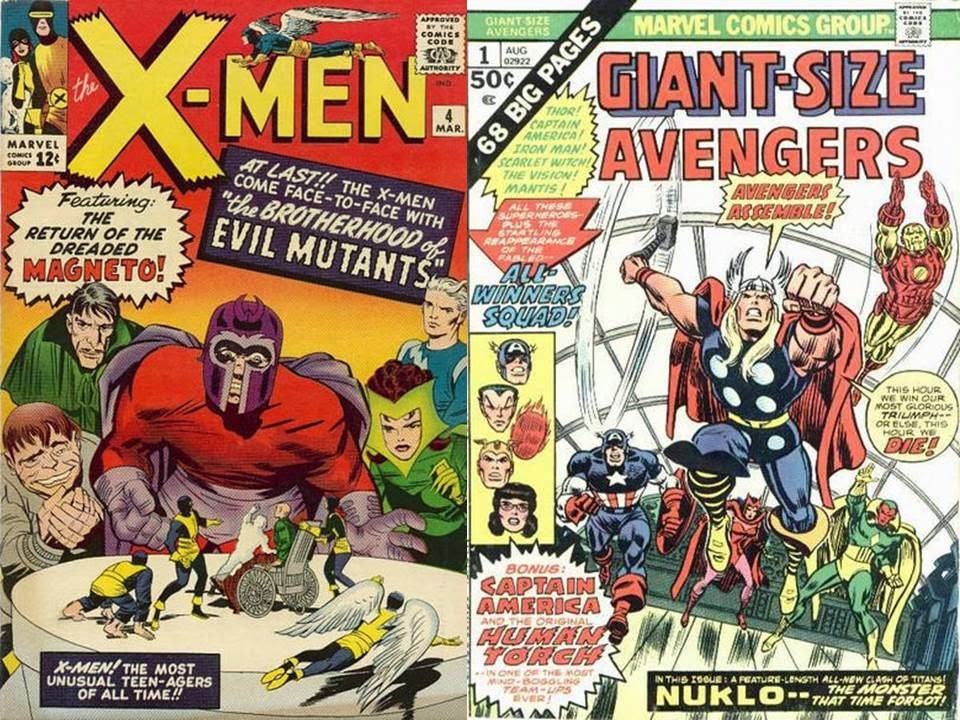 So, it seems all this comes about because Quicksilver is a bad dad?  Well, he’s had his own daddy issues over the years….and it relates to both the Avengers and the X-Men!

Quicksilver and his sister, the Scarlet Witch, were mutant orphans who were saved by Magneto and recruited to his Brotherhood of Evil Mutants as related in Uncanny X-Men #4  (March 1964, by Stan Lee and Jack Kirby).  Then, in Giant-Size Avengers #1 (August 1974, by Roy Thomas and Rich Buckler), it was revealed that the World War II heroes of the All-Winners Squad –  the Whizzer and Miss America –  were the parents of the young Pietro and Wanda Maximoff and their family life was happy and settled, Quicksilver could marry the Inhuman Crystal, and Scarlet Witch could marry her avenging android, the Vision. 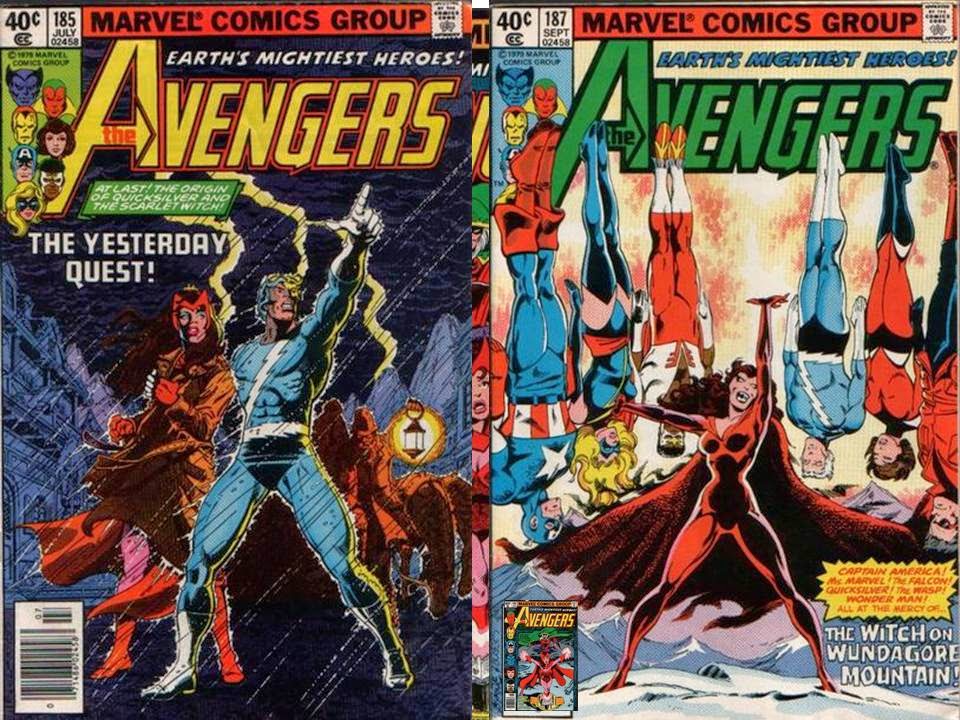 But, in relating this story…one thing was omitted…and Quicksilver and the Scarlet Witch found out in Avengers #186 (August 1979, by Mark Gruenwald, Steven Grant, David Micheline and John Byrne), that the Whizzer had only been their adoptive father, and that their mother was a woman named Magda who fled her husband because he went insane with power, and didn’t know about the kids.  Magda gave birth to them with the help of the High Evolutionary’s assistant, Bova, at Wundagore Mountain, and then Magda left them there.

In Uncanny X-Men #125, (September 1979, by Chris Clairmont and John Byrne), it was revealed that Magneto was pining over his lost wife, Magda, who had fled him in the early days of his career (coincidentally a place where the X-Men learned more of the Phoenix force?).  Yes, you’ve likely figured it out…Magneto is the father of Quicksilver and the Scarlet Witch. 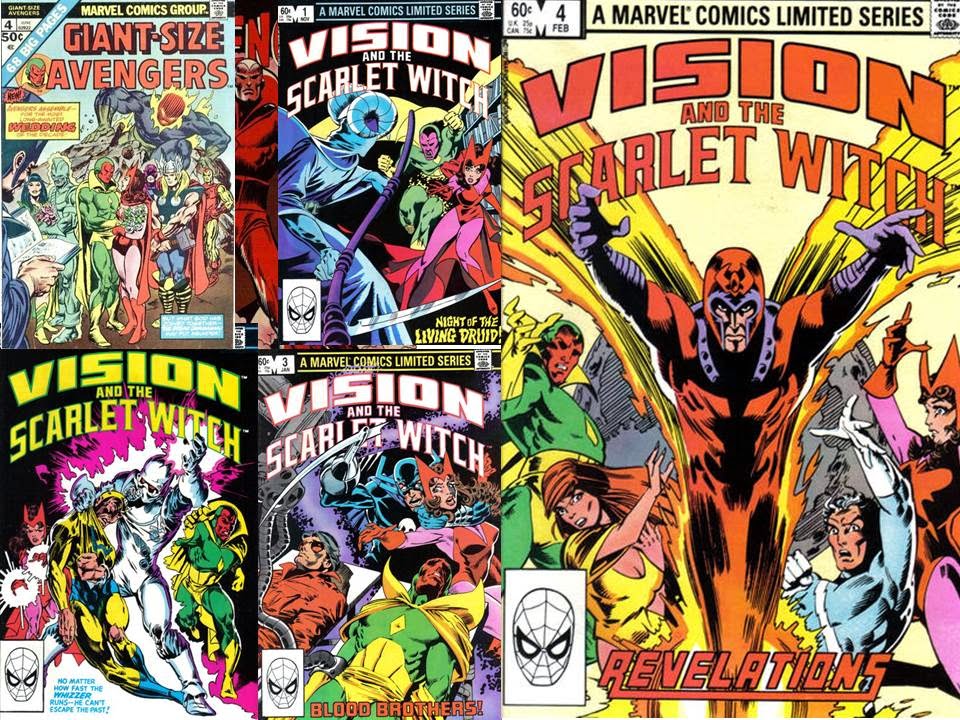 Neither side would know until Vision & the Scarlet Witch #4 (February 1983, by Bill Mantlo and Rick Leonardi), when Magneto had been able to track down Bova, find out he had kids….and then track them down, and let them know that he was their father.  This lead Magneto to lean towards the good side for a time (as this happened before the Secret Wars mentioned above), but Magda was later proven right, as Magneto succumbed to his power lust for a time, and even turned both Quicksilver and Scarlet Witch back to the dark side for a time.  One also has to look at all the dealing of Magneto and his kids…as Magneto didn’t know from 1964 through 1983 he had kids! 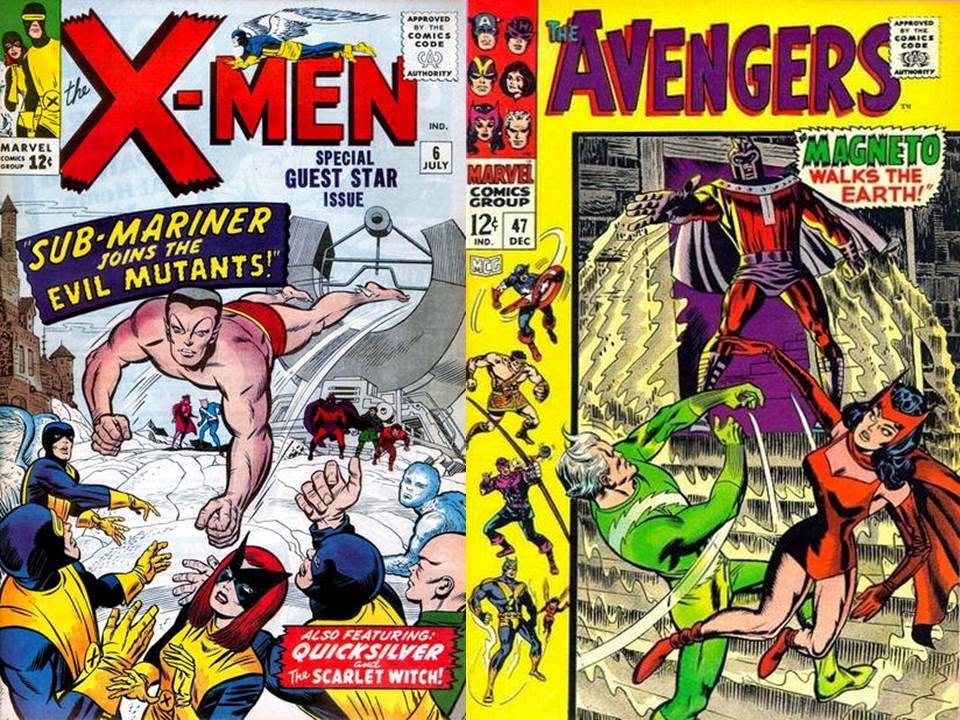 The Vision & Scarlet Witch original 4-issue mini-series was reprinted, along with Vision and Scarlet Witch’s marriage from Giant-Size Avengers #4 (June 1975, by Steve Englehart and Don Heck), and that marriage had been presided over by Avengers time-travel foe Immortus…wow, the Phoenix force and the whole Kang/Immortus thing…seems history unravels around Wanda and Pietro, doesn’t it?

Even before either the Avengers or X-Men were around, the battle had been brewing….(and that Quicksilver and the Scarlet Witch seem to belong to both worlds....)
Posted by Dave's Not Here Comic Blog at 7:02 AM