X-Men Days Of Past Future 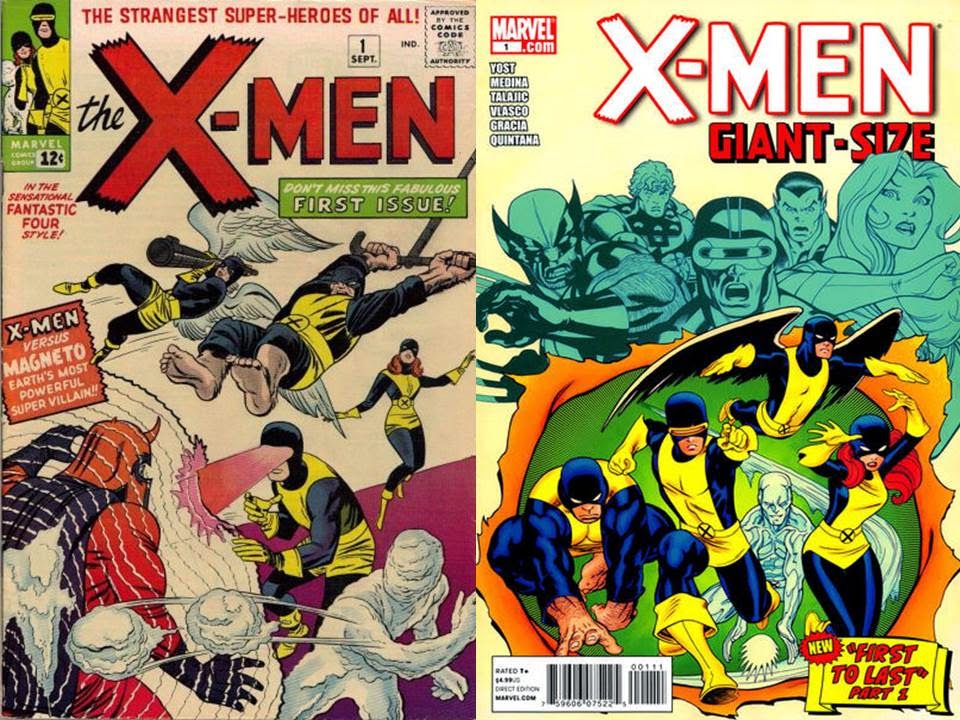 After adding new student Jean Grey (aka Marvel Girl), Professor X sent his team, the X-Men out on their first mission against the evil mutant, Magneto back in the X-Men #1 (September, 1963, by Stan Lee and Jack Kirby).  While that issue is the first appearance of Professor X, Cyclops, Iceman, the Beast, Angel, Marvel Girl and Magneto and all the mutant madness they brought with them (though other mutants and ideas like seen in the movies didn't come until later), they all had a history before that issue...

...and we'll take a quick look at a little of it here! 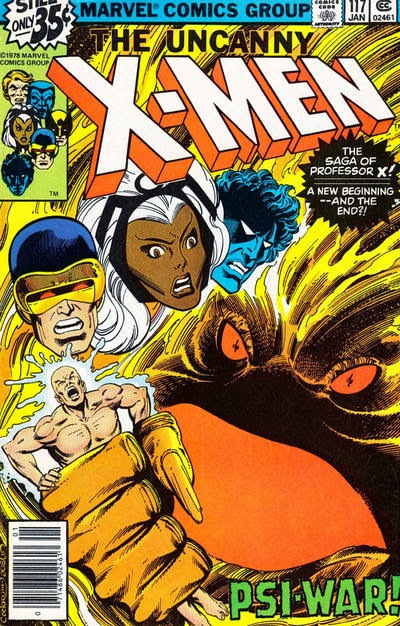 First off is the man who helped to bring the team together...Professor X.

Professor Charles Xavier was a telepath and telekinetic who was one of the most powerful mutant minds on Earth.  Charles felt it was his mission to help mutants...

...he did so in X-Men #117 when he faced evil mutant Shadow King (Amahl Farouk) after meeting a young thief (Ororo, later to be known as Storm) in a story by Chris Claremont and John Byrne (reprinted a few times, like in Marvel Masterworks #24 or Classic X-Men #23). 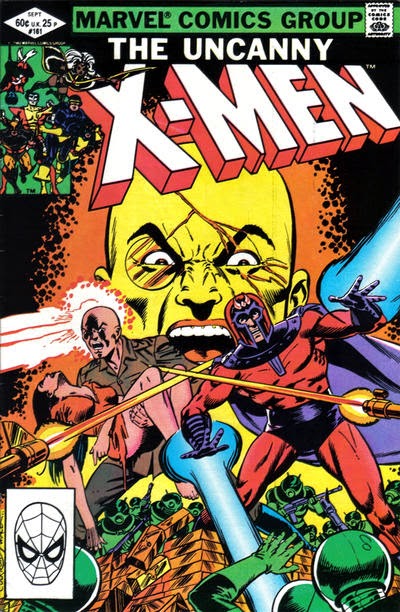 Charles even worked with his future foe, Magneto, trying to save Gabrielle Haller in a story detailed in Uncanny X-Men #161 (September, 1982, by Chris Claremont and Dave Cockrum)...

...wherein the pair faced off against Baron Strucker and the agents of HYDRA before Nick Fury joined S.H.I.E.L.D.!

This story was reprinted in X-Men Archives #4, and, yes, the Professor is still in action on his own (pretty much) because he still has use of his legs. 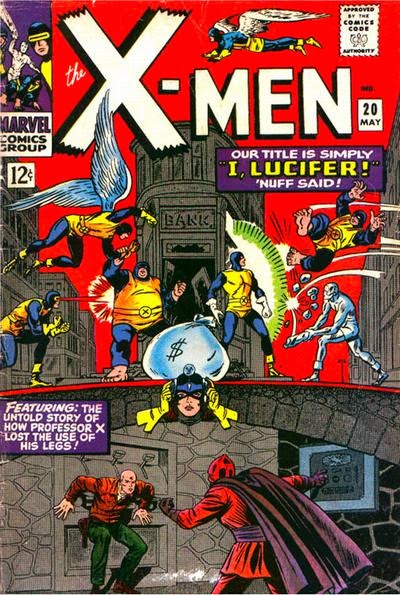 X-Men #20 (and #21, both by Roy Thomas and Werner Roth, in May/June 1966) detail the story of how Charles Xavier lost the use of his legs fighting against the invading alien, Lucifer.

These stories are collected in Marvel Masterworks: The X-Men #7 and in the X-Men Omnibus #1, and this was the inspiration for Charles Francis Xavier to begin to collect the mutants he had been researching together and form a school (as well as a team of agents he could sent into the field to protect people from those who would misuse their power.....).

Much of Professor X's history is combined with the X-Men, not really having a title of his own....though one could say that the X-Men book IS the story of Professor X! 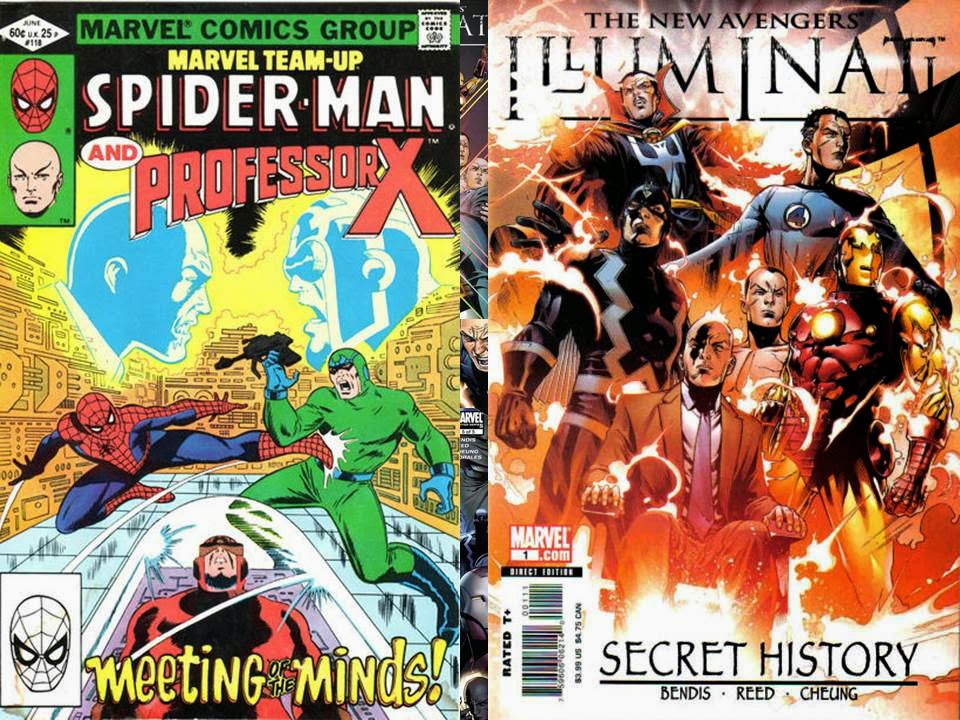 Still, Professor X did get a little bit of solo action in Marvel Team-Up #118 (June, 1982) working with Spider-Man against Professor Power and the Fixer to help Mentallo (Fixer and Mentallo being foes of Nick Fury and his agents of S.H.I.E.L.D).  Professor X was also a member of the Illuminati along with Namor the Sub-Mariner, Iron Man (Tony Stark), Mr. Fantastic (Reed Richards), Black Bolt and Dr. Strange which formed after the Kree-Skrull War, and helped the Marvel Universe as a whole deal with events such as the Beyonder, the Hulk, the Infinity Gauntlet and the Civil War.

Got My Eye on You 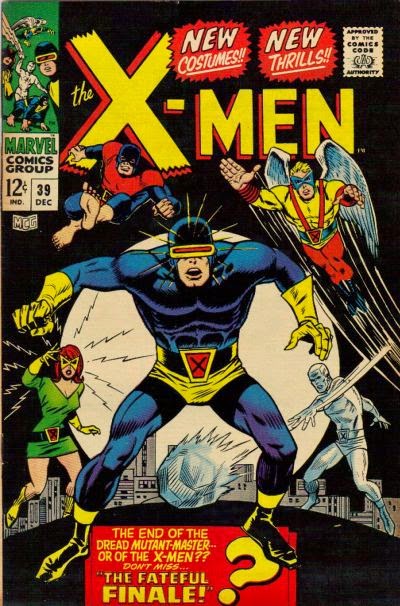 Cyclops was the first mutant Charles Xavier decided to recruit for his school, and he needed the help.

Charles Xavier began to look at young orphan Scott Summers as his first recruit for the X-Men in a back-up series starting in X-Men #38 (November, 1967) to X-Men #43 (April, 1968, all by Roy Thomas and Werner Roth) wherein the Professor and the soon to be Cyclops faced off against the Living Diamond (Jack Winters, who showed up in X-Men #39, December, 1968, which in the main story Scott got his first individual costume) and Scott became the first member of Xavier's team.

All these stories are collected in X-Men Omnibus #2 along with... 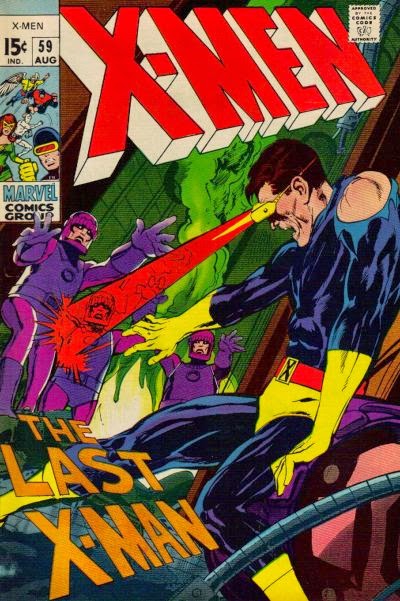 These stories are part of the basis for the Sentinels attacking all of mutantkind (though they started their war against mutants back in X-Men #14, November, 1965 by Stan Lee and Jack Kirby), but weren't the end of the Sentinels (nor Cyclops!). 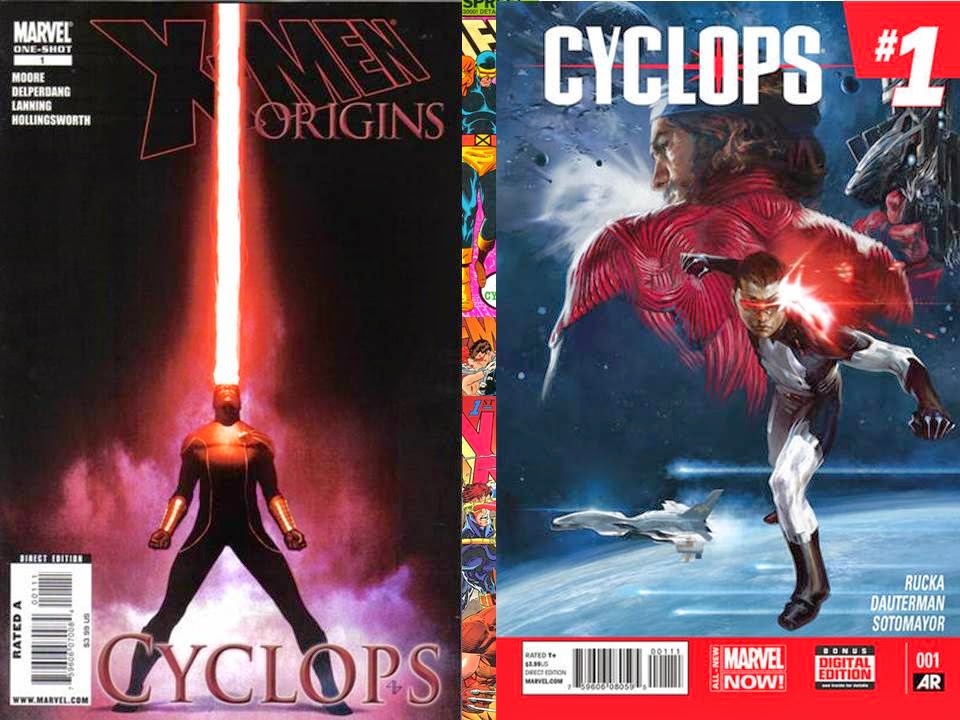 Scott also never wandered far from the X-Men (later members might give an excuse why....), and Scott even found out more about his own history while working with the second team of X-Men (founded with Giant-Size X-Men #1, with Wolverine, Banshee, Storm, Nightcrawler, Colossus and Thunderbird) and all of that history was summarized well in X-Men Origins Cyclops (2010) in time to have Cyclops ready for his time as an interstellar pirate in his own magazine which came out this year! 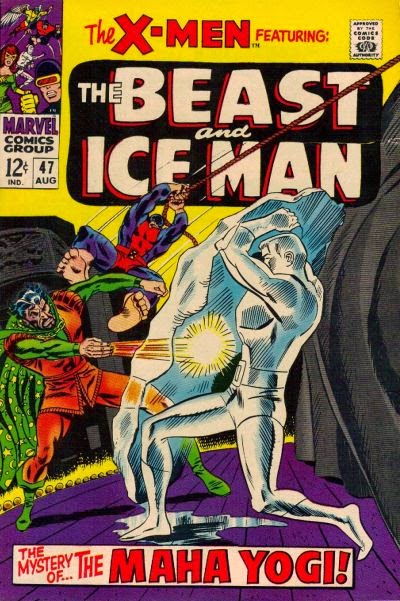 Iceman was the student Cyclops was sent to retrieve.  Young Bobby Drake was not quite ready for his mutant power to manifest, and his cold powers got him into hot water with his parents and an angry mob...and need the help of Cyclops to save him in the run of stories from X-Men #44-46 (May-July, 1968, stories by Gary Friedrich and George Tuska) with a power recap in X-Men #47 (August, 1968) by Arnold Drake and Werner Roth (all of these stories also in the X-Men Omnibus #2...).

In the early days of the X-Men, Iceman hung around with the rest of the team, occasionally leaving the title to fight the Human Torch, and was trying to get serious with magnetic mutant Lorna Dane...at least until Scott's brother, Alex, showed up. 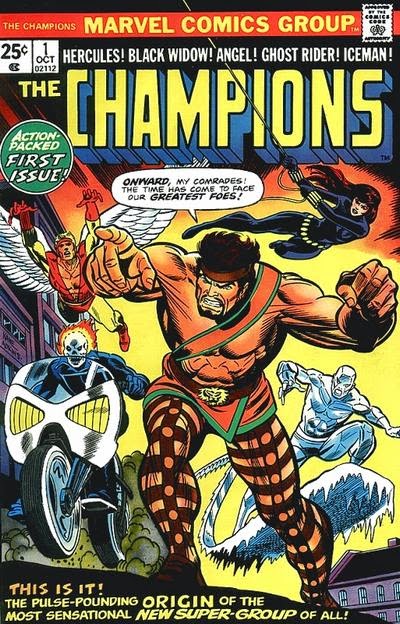 Iceman was one of the X-Men to leave the team after their encounter with Krakoa in Giant-Size X-Men #1.

Iceman and Angel pal around together, co-founding the Champions (along with Ghost Rider, Black Widow and Hercules, which lasted for 17 issues in the mid-1970s written by Tony Isabella, Chris Claremont and Bill Mantlo, and drawn by Don Heck, George Tuska, Bob Hall and John Byrne) in a series that also guested X-Men related people like the Griffin, the Beast, Magneto, Unus, the Blob, the Vanisher, Lorelei and the Sentinels as well as introducing villains Rampage and the Swarm before the team ended (and as a team founded with ex-X-Men and ex-Avengers, and a few loners like Ghost Rider and Darkstar...it at least showed that the West Coast of the Marvel Universe needed protecting!). 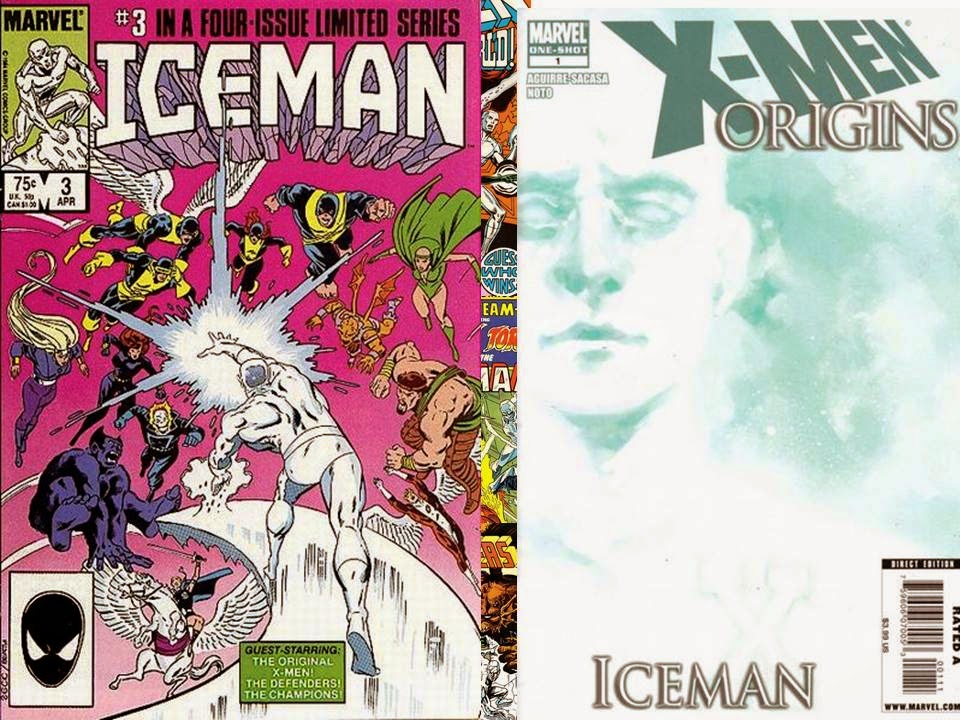 Bobby then joined Beast, Valkyrie, Moondragon and Gargoyle in the New Defenders, before returning to the reformation of the original X-Men in X-Factor, and then rejoining the X-Men. 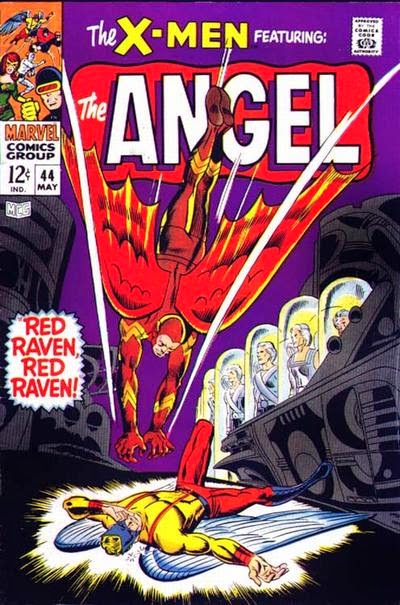 Angel was Warren Worthington III, son of a wealthy family, and had everything in the world...so mutant powers weren't particularly welcome, even if they were wings that allowed him to fly.

Warren even went out and tried to be a super-hero on his own, in a back-up series from X-Men #54-56 (March-May, 1969, by Arnold Drake, Roy Thomas and Werner Roth), and almost succeeded in blowing up a city if not for the help of Cyclops and Iceman, which led to Warren joining the X-Men (even though he was the first X-Man to have a small feature outside of X-Men, being an all-new back-up in the last two issues of Ka-Zar's 3 issue reprint title of 1970 and in Marvel Tales #30...stories which were odd as they were written by Superman co-creator Jerry Siegel, and drawn by George Tuska, wherein Angel faced the Dazzler (Burt Worthington, not the discoing Alison Blaire).  All these tales are also in the X-Men Omnibus #2! 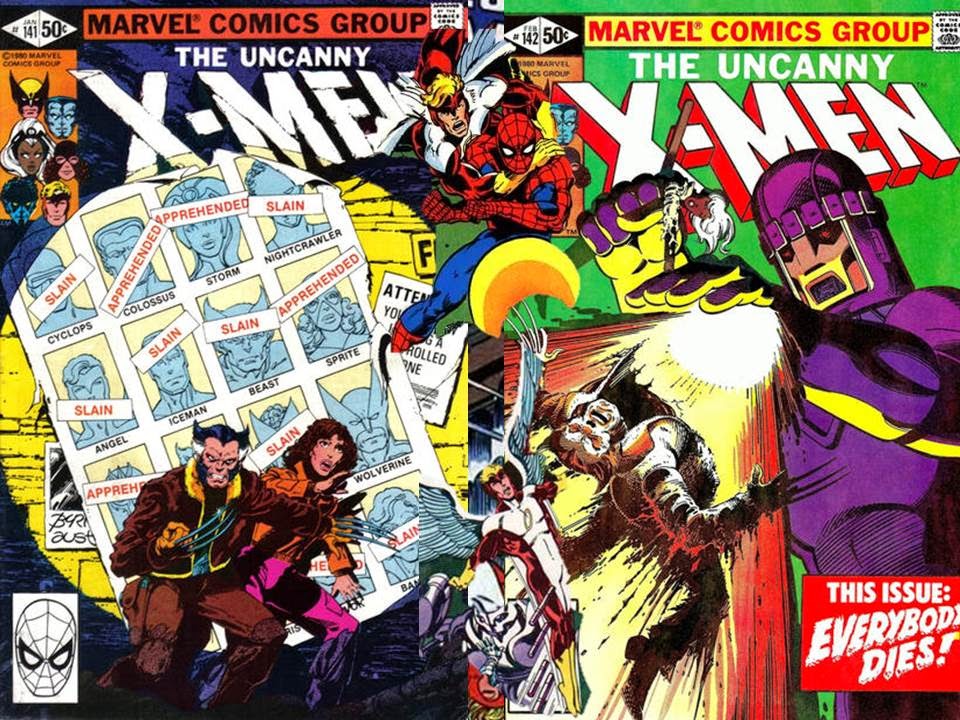 Angel left the X-Men with Iceman, joined the Champions, but Angel came back to the X-Men for a bit first (most notably during the time of X-Men: Days of Future Past - X-Men #141 and Uncanny X-Men #142 in 1981 by Chris Claremont and John Byrne), when Kate Pryde sent her mind back into her younger body and helped the X-Men stop the new Brotherhood of Evil Mutants which included Mystique, the Blob, Pyro, Avalanche and Destiny...and prevented the Sentinels from enslaving mankind! 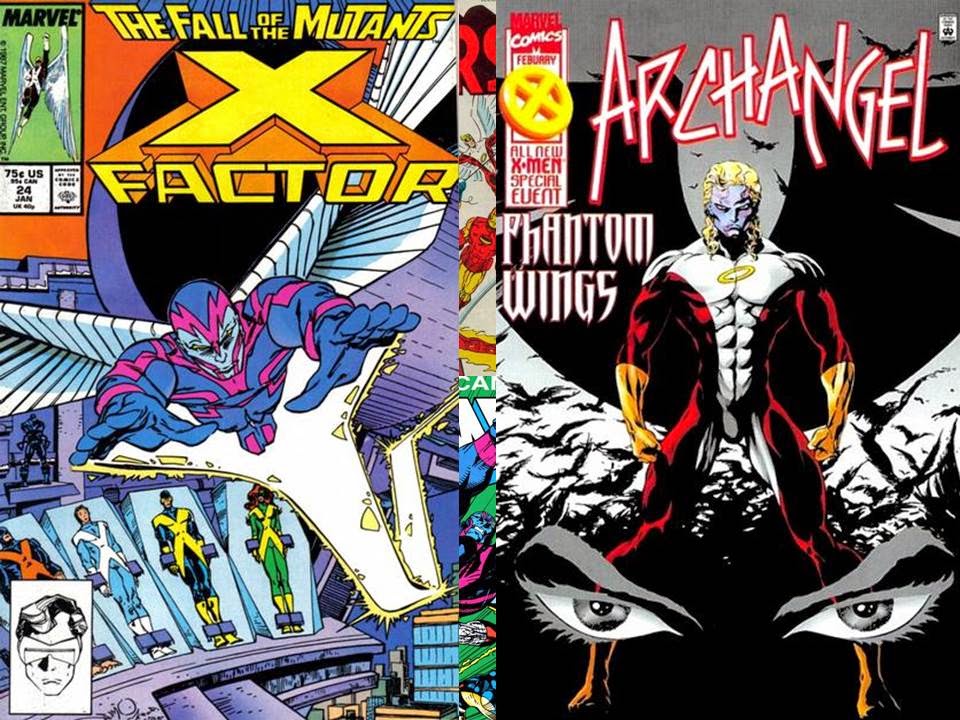 Still, the Angel left the X-Men to go to the new Defenders, then to X-Factor, which led to Warren losing his wings and becoming an agent of Apocalypse (and getting the name Archangel as well).  Still, Warren held it together to come back to the X-Men...even if it was under the Archangel name (and with new blue skin as well....). That wasn't the most shocking transformation an X-Man would undergo.... 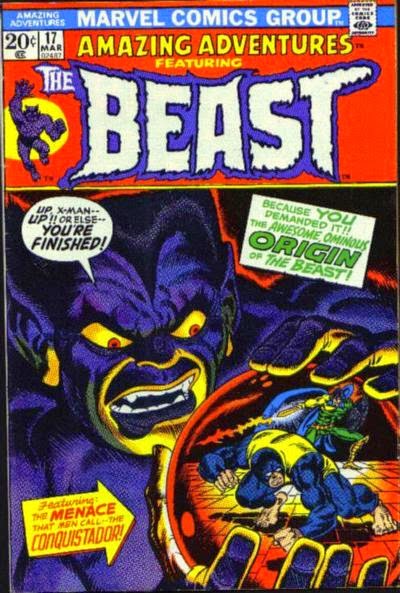 That would be the Beast!  Hank P. McCoy was just an ordinary genius, with incredible coordination and abnormally larger hands and feet.  Really big hands and feet!  In back-up stories from X-Men #48 (September, 1968, a fact file by Arnold Drake and Werner Roth) and stories in X-Men #49-53 (October, 1968 to February, 1968, also by Drake and Roth), with the soon-to-be Beast fighting the Conquistador with the help of Cyclops, Iceman and Angel!

Stories also in X-Men Omnibus #2...as well as mostly in Amazing Adventures #17 (a few pages missing in this March, 1973 reprint....with a cover by Jim Starlin, no less). 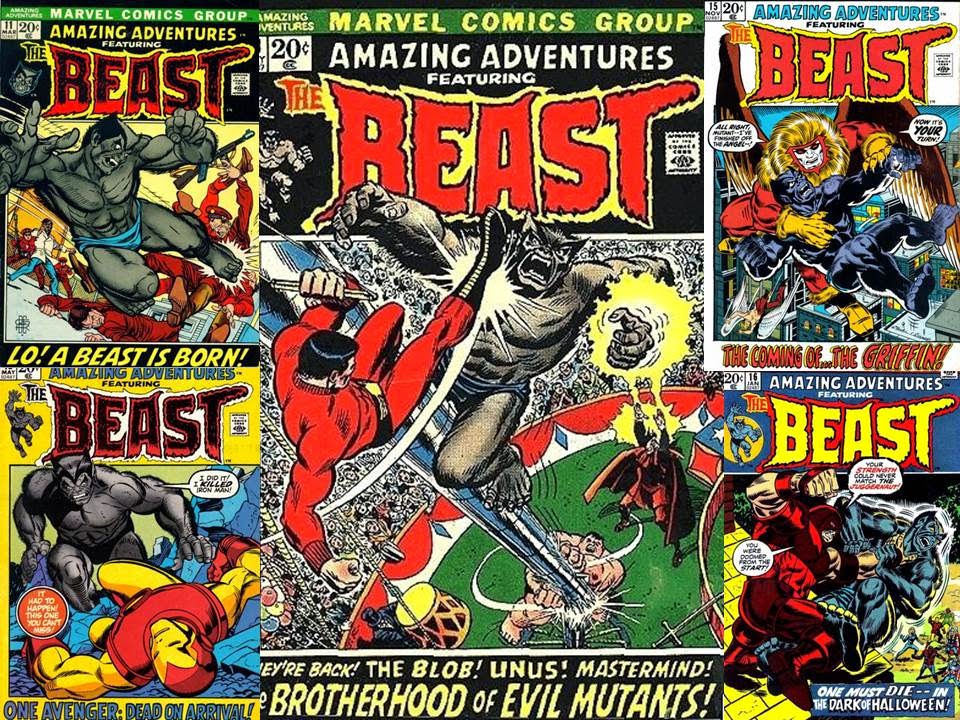 In Amazing Adventures #11-16 (March, 1972 to January, 1973, by Gerry Conway, Steve Englehart, Tom Sutton, and Bob Brown), the Beast set out on his own, and became a furry mess, messing around with a mutagenic formula for the Brand Corporation...and it doesn't go well for Hank!  Still, at least he was being featured at this time (unlike the rest of his fellow X-Men), facing ex-X-Men foes Unus, Mastermind, the Blob, and the Juggernaut, as well as new foe the Griffin, and even became an Avenger after this run was over (and this run is reprinted in Marvel Masterworks: The X-Men #7). 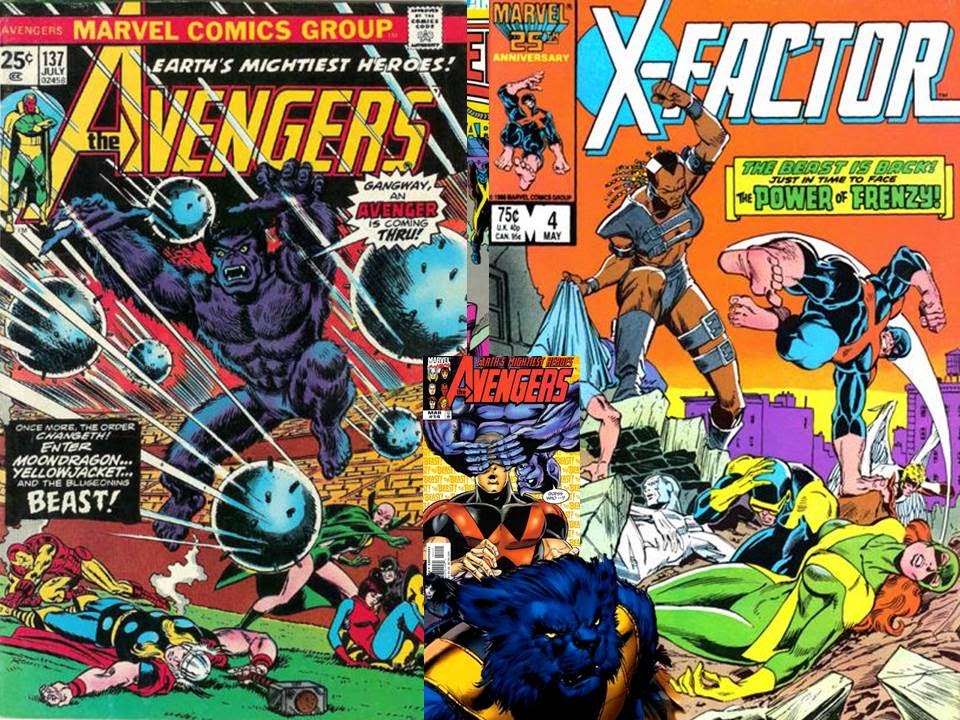 The Beast did return whenever the X-Men called, and while as an Avenger (where he met Moondragon), formed a friendship with Wonder Man that has mostly survived the years (and was drawn especially well by both George Perez and John Byrne)...and then the Beast joined the Defenders for a time, then X-Factor (losing his blue fur for a time), then rejoined the X-Men and mutated even further into a more cat like "Beast", but still with blue fur and proving that once an X-Man, always an X-Man!

The Female Is the Deadliest 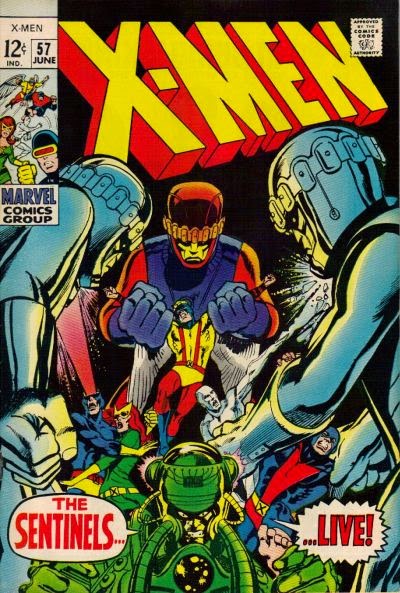 Then there is Jean Grey/Marvel Girl!  The girl with mind-reading powers as well as telekinesis, and the love of Cyclops/Scott Summers life!

Jean had a little fact file in X-Men #57 (June, 1969) by Linda Fite and Werner Roth....but, for the most part, Jean's life wasn't really her own....Jean helped Professor X battle the Z'Nox to save Earth....and in that touched a primal force of the universe, the Phoenix (or at least John Byrne teased that in X-Men: The Hidden Years in a bit of retroactive continuity). 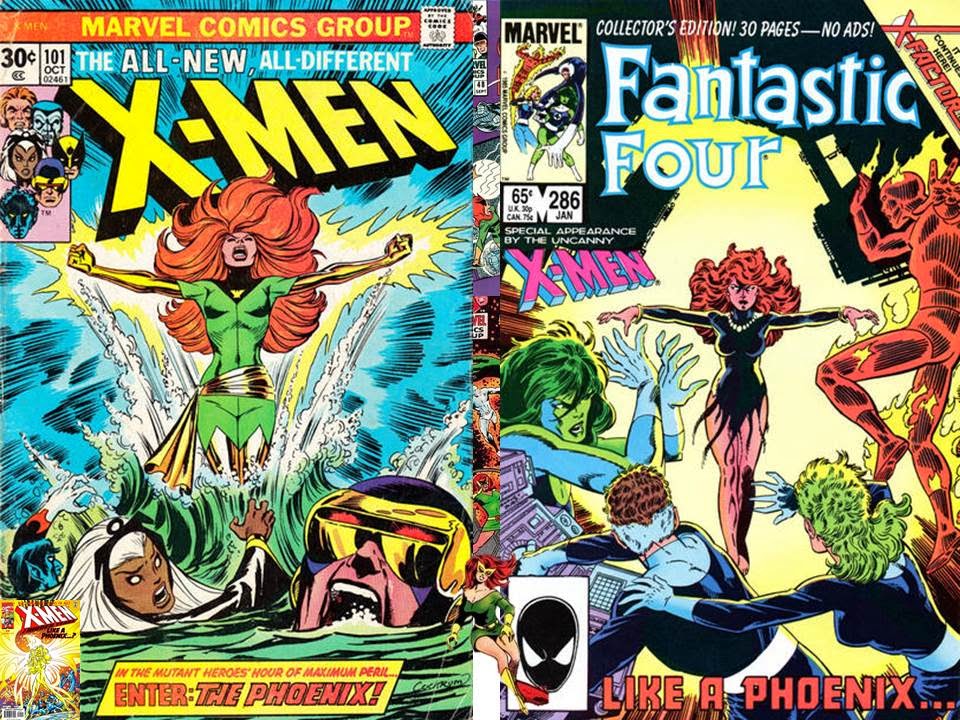 Even though Jean stuck with the X-Men (and Cyclops), she didn't stay long after Giant-Size X-Men #1, but did return to help....

This alien lifeforce took the place of Jean when she sacrificed herself to save the team...and became the Phoenix.  Sadly, this force went bad and died (in the form of a powerless Jean Grey) devastating Cyclops (who had thought her the love of his life)... 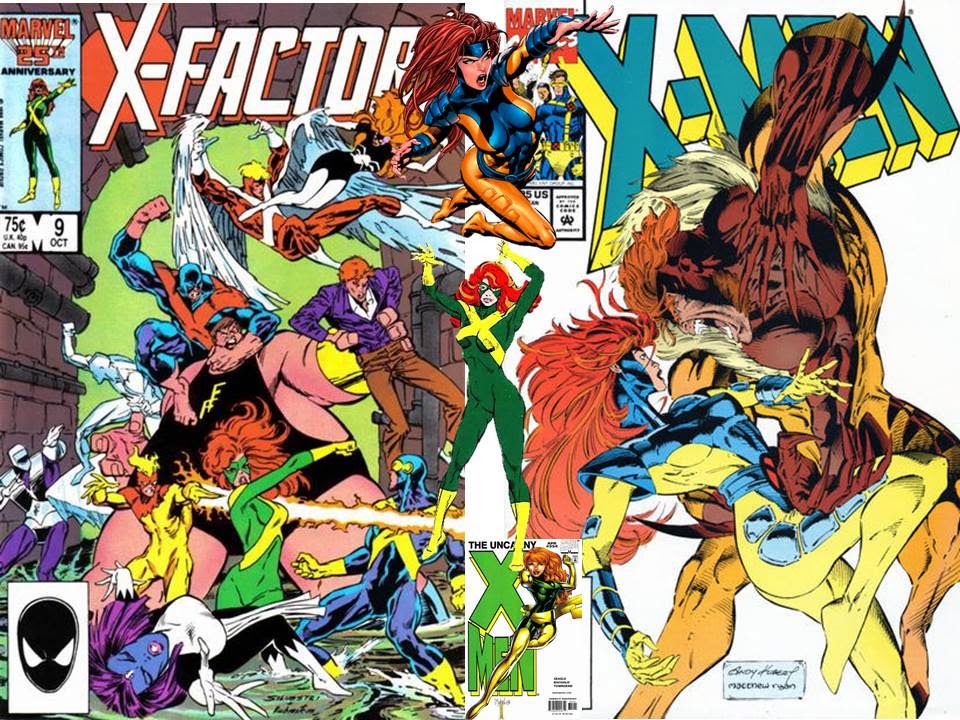 ...but, really she was just waiting in a cocoon, and brought back to him with the advent of X-Factor!  Jean eventually dumped her code name for a time, and then even accepted the Phoenix for a while...before taken from us yet again.   But, like any Phoenix, Jean should be back! 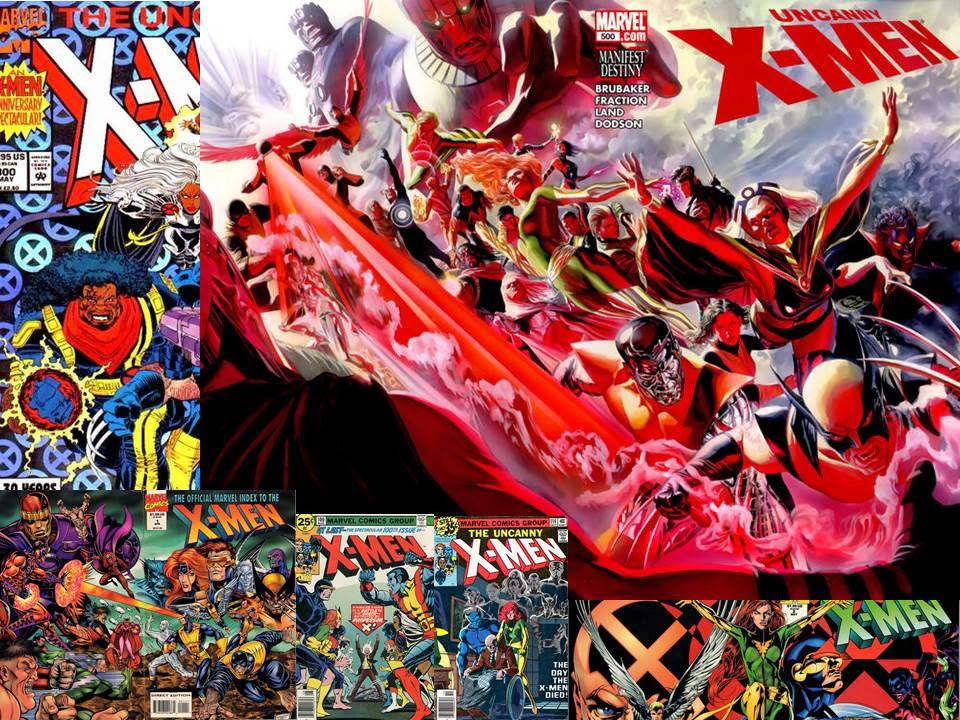 Posted by Dave's Not Here Comic Blog at 6:57 AM