Spidey’s kept up an amazing run over the years, meeting with various other Marvel heroes in Marvel Team-Up (and, well, just about any title Spider-Man has been in). 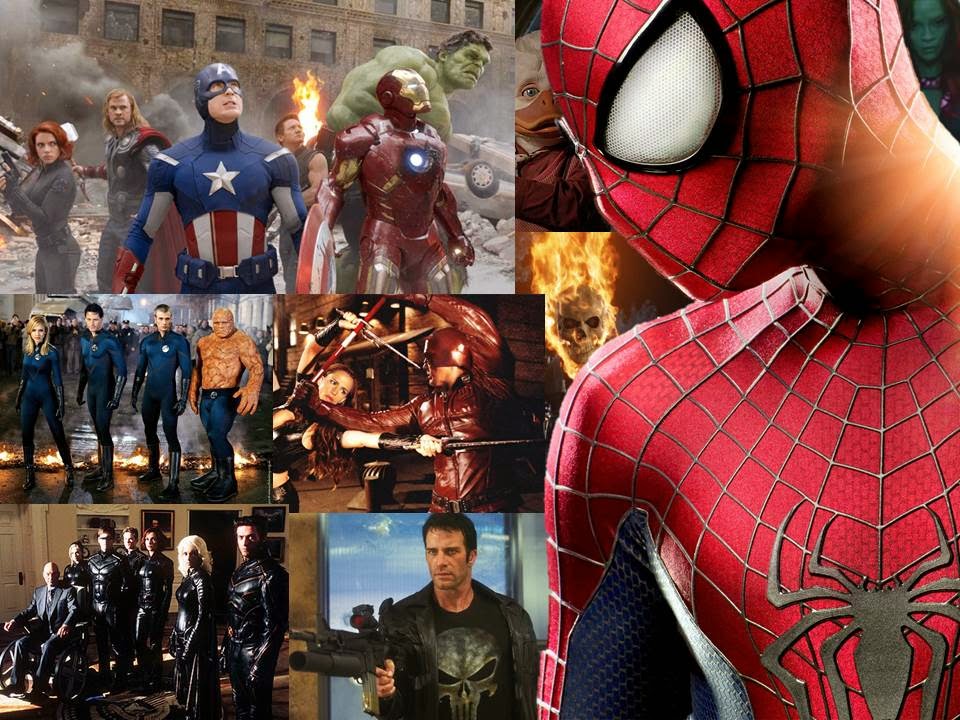 With his latest movie, the Amazing Spider-Man, Spidey’s all ready to take over the big screen again!  But….it doesn’t seem likely he’ll be teaming up with the Dark Knight (sort of obvious, Batman’s DC and Spidey’s Marvel), or sadly, even with his fellow Avengers (Spidey had been a part of the team in the comics) as the Amazing Spider-Man is being produced by Columbia Pictures (and it was Paramount Pictures that brought us the Avengers, and its movies, Iron Man, the Incredible Hulk, Iron Man 2, Thor and Captain America: the First Avenger)…and Spidey’s fellow New Yorkers like the Fantastic Four, Daredevil, Elektra, the X-Men and the Punisher are spread out as well!  (The less said about the travelling Ghost Rider….and, well, there’s Howard the Duck as well….and the approaching Guardians of the Galaxy).

Still, this doesn’t stop the comics from teaming them up, or even having your friendly neighborhood Spider-Man meet with other movie franchise stars, even as part of his regular comic book appearances.  So, let’s take a look at a few of those!  And, wouldn’t any of these be the blockbuster of the summer? 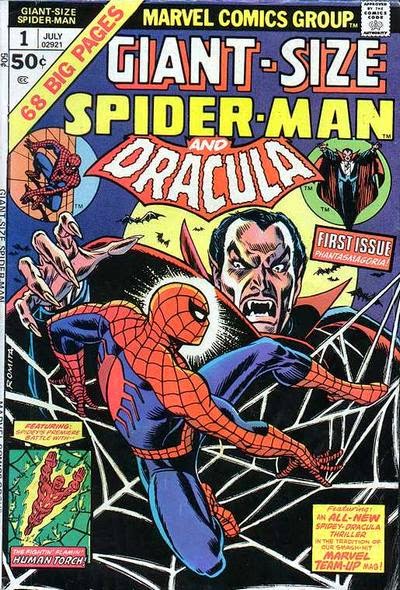 One of the earliest meetings of these type was when Spider-Man confronted Dracula in Giant-Size Spider-Man #1 (July 1974, by Len Wein and Ross Andru), where the characters cross…on a boat.  It’s a little more serious than that (Peter was there to help Aunt May with an illness…), but still pretty basic (and though the cover implies differently, Spidey and Dracula never meet).  Dracula had been added to the Marvel Universe with Tomb of Dracula back in April 1972 (by Gerry Conway, Roy Thomas and Gene Colan), and had been encountering the occasional Marvel character as time progressed (as well as having a few created there as well, such as Blade, who fronted his own movie franchise of the daywalking vampire with Wesley Snipes as the titular character).  Not an actual tie-in to any specific Dracula, but I’ve always felt he looked a little like the Christopher Lee version from the Hammer Films (though with a bit of the classic Bela Lugosi thrown in)…Marvel’s version of Dracula was one of the stronger ones, and most of the better adaptations of Bram Stoker’s Gothic character had something of this look involved. 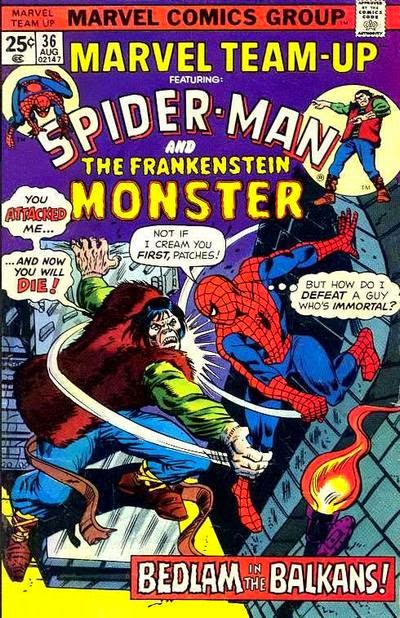 Dracula wasn’t the only classic Universal Monster Spidey ran into.  Frankenstein Monster’s rose to meet the webslinger in Marvel Team-Up #36 (August 1975, by Gerry Conway and Sal Buscema).  Frankenstein’s Monster was in an issue of Silver Surfer, but started in earnest with The Monster of Frankenstein #1 (January 1973, by Gary Friedrich and Mike Ploog), and lasted for 18 issue (with the title switching to The Frankenstein Monster with issue #6) until he ran into the Amazing Spider-Man.  Or, more accurately, Spidey and the Monster were kidnapped by Baron Ludwig von Shtupf to help create a new breed of monsters (under the baron’s control, of course).  The two worked together (as they also faced Spidey’s werewolf foe, the Man-Wolf, who had returned from the moon) and the Mary Shelley’s Universal Monster shambled off to pop up here and there (as a member of the undead Avengers foes, the Legion of the Unliving, or with Iron Man fighting the Dreadknight, a distant relation of the Black Knight), and this Frankenstein’s Monster looks like an amalgam of the earlier versions, having longer hair than and a thinner look than the classic version by Boris Karloff, Lon Chaney Jr., Bela Lugosi or even Glenn Strange. who met Bela Lugosi‘s Dracula (along with Bud Abbott & Lou Costello in Abbott & Costello Meet Frankenstein). 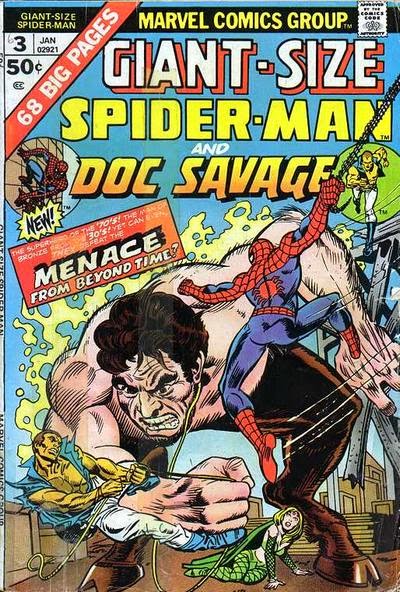 Spidey didn’t just encounter old monsters, but those that fought them as well.  Spidey met another guy with big muscles, the old pulp hero, Doc Savage in Giant-Size Spider-Man #3 (January 1975, by Gerry Conway and Ross Andru).  Lester Dent‘s Man of Bronze first appeared in Doc Savage Magazine in March 1933 and Clark Savage Jr was a “perfect human being”, at least in terms of strength, speed and mental abilities, and he and his band of compatriots fought criminals and spies.  Marvel started comic book adaptations of his stories with Doc Savage #1  (October 1972, by Roy Thomas, Steve Englehart and Ross Andru) which lasted eight issues.  Sadly, Spidey and Doc don’t actually meet in the Giant-Size either, but both spend their time working against blue alien babe named DeSinna in their own times (Marvel at least kept Doc set in the 1930s when they used him).  Doc does meet a later Marvel star, the Fantastic Four’s Thing, in Marvel Two-In-One #21 (November 1976, by Bill Mantlo and Ron Wilson).  Though the movie came out in June 1975, Andru‘s Doc Savage does have a “Ron Ely” quality (Ron Ely being the actor to portray Doc in Doc Savage: The Man of Bronze).  And, Hollywood plans more with a new Doc Savage movie to come. 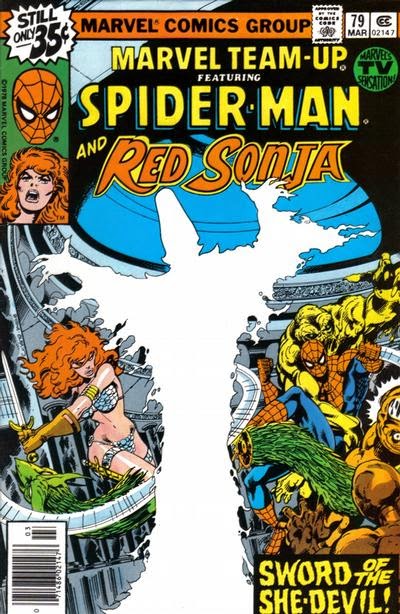 Keeping with the idea of the old pulps, Spidey met the female barbarian lead, the Red Sonja in Marvel Team-Up #79 (March 1979, by Chris Claremont and John Byrne).  Red Sonja came from the pages of Conan the Barbarian (#23,  February 1973, by Roy Thomas and Barry Windsor-Smith) and was based loosely on Red Sonya from Robert E. Howard‘s “The Shadow Of The Vulture” short story from January 1934 (not originally a Conan story, which led to an eventual separation in the rights between owning Red Sonja and Conan), ending up with 7 issues of Marvel Feature, and 3 series of her own at Marvel (lasting 15 issues, 2 issues and 13 issues).  This story did have the two characters meet, more or less, using a bit of magical trickery (needed to fight Red Sonja’s old magical foe, Kulan Gath, who manifested in the here and now).  A delightful story of Spidey fighting along side the metal-bikinied red-head, along with a surprise or two here and there (look for a mild mannered Daily Planet reporter to make a cameo).  Red Sonja’s now a big franchise at Dynamite Comics, and they worked with Marvel to make a Spider-Man/Red Sonja mini-series (more or less following up on the idea in this story…running a bit too long, but still having some fun with the idea).  Sadly, less fun was the 1985 Red Sonja movie with Brigette Nielsen as the main character (with Arnold Schwarzenegger playing a Conan-like character in the movie, but not Conan, as back then it was still rare for movie franchises to crossover).

Look, Up In The Sky! 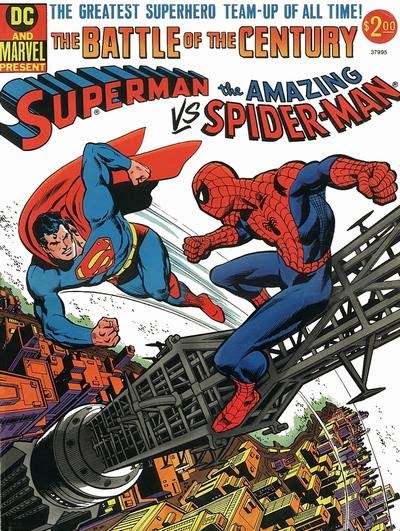 Though not in a normal comic, but in a large Treasury edition, Spider-Man encountered Supeman in a historic Marvel and DC team-up!  True, DC and Marvel worked together the year before to produce a treasury sized (that mean larger than normal comic) adaptation of “The Wizard of Oz“, but in January, 1976, we readers were treated to Superman Vs. The Amazing Spider-Man….”the Greatest Superhero Team-Up of All Time!” by Gerry Conway and Ross Andru (with help from Neal Adams, Dick Giordano, Terry Austin, Josef Rubinstein and Bob Wiacek….hey, something this big needed an army of artists!  As well as words from Stan Lee and Carmine Infantino as well).  In this story, Superman tosses Lex Luthor into prison, as Spider-Man does to his own foe, Doctor Octopus.  Just so happens, for this story, the two end up in prison together, and are able to escape.  Though the machinations of the villains, the two heroes fight each other (part of those plans included the kidnapping of Lois Lane and Mary Jane Watson, the paramours of the titular heroes), figure out that they were tricked, and then team-up to save the girls and defeat the bad guys.  Oddly enough, it had been suggested to Lee and Infantino to do a movie detailing this battle, but it was Superman – the Movie (with the iconic Christopher Reeve as Superman, that eventually came out in December 1978) and a few Spider-Man TV movies (with lesser known Nicholas Hammond in the later 1970s).  Reeve went on to play Superman three more times, and, Superman has been a regular presence in the movies and television for decades, even making it to Saturday Night Live on occasion…which is ironic! 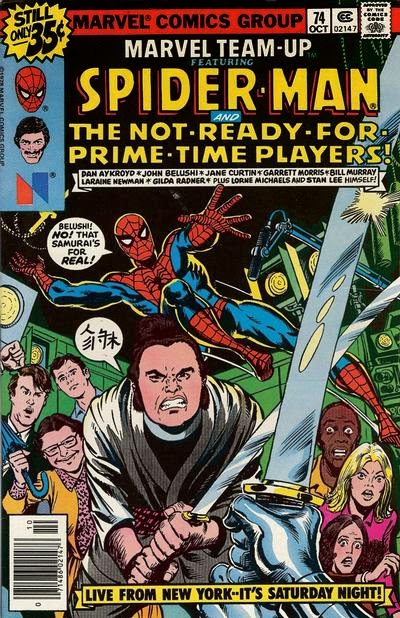 Lastly, Spidey met up with one of his strangest team-ups ever….meeting the real life stars of Stripes, the Blues Brothers, Coneheads, Invaders From Mars, Haunted Honeymoon and Car Wash…or at least the actors who played characters in those movies when Spidey teamed up with the Not-Ready-For-Prime-Time Players in Marvel Team-Up #74 (October 1978, by Chris Claremont and Bob Hall).  Taking the idea that Stan Lee would be able to host SNL (and, hey, why’s that so hard to believe…well, it’s easy now, but Stan hadn’t been guest-starring in Marvel movies back then…), and a little postal problem…the villainous Silver Samurai ends up trying to fight John Belushi for a ring mistakenly delivered to the comedy star…and Spidey ends up having to work with the cast to keep John safe (and the show on the air).  It does sound like this is a really odd idea, but the story works (and leads to a multi-issue crossover a little later in the series, where Spider-Man works with Nick Fury and Black Widow (who have been a few movies together recently) as well as Shang-Chi (the son of Fu Manchu)….and Fu Manchu, there’s a fellow who has been in some old movies as well! 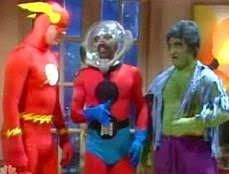 (Hey, he retains the strength of a human…at ant-size!  Just ask him!  It’s poor Garrett Morris as Ant-Man, John Belushi as the Hulk…and Dan Aykroyd as the Flash…).
Posted by Dave's Not Here Comic Blog at 11:33 AM