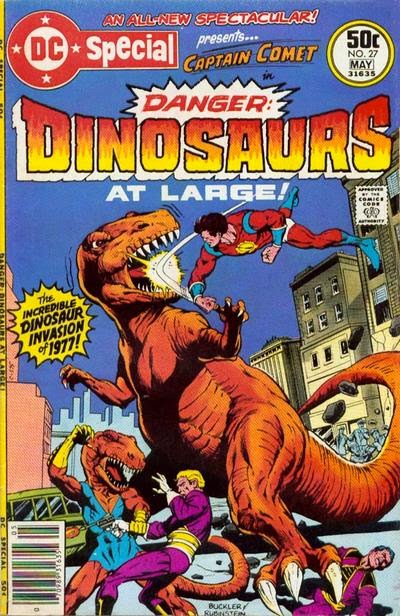 It only took a few hundred million years for everything to come together correctly to allow DC Special #27 (April-May, 1977, by Bob Rozakis and Rich Buckler) with the title of "Danger: Dinosaurs At Large!" to take place.

The dinosaurs were the easy part...getting the rest of the players in place took a little more work!


Here's a quick look at the major players in the story.....

....which weren't the Justice League (though members Superman, Wonder Woman, Flash, Green Lantern, Hawkman and Black Canary do guest-star in the issue....instead it was an honorary League member that had most of the action!).

Mutant From The Future Adam Blake was born ahead of his time (about 100,000 years ahead).  This lad was born as a comet flashed through the sky which mutated him into a type of future man, with enhanced strength, speed and mental powers like telekinesis, telepathy and a photographic memory.  Starting with Strange Adventures #9 (June, 1951, by John Broome and Carmine Infantino),  and the help of Dr. Emery Zackro (who explains to the lad his mutant status) the newly named hero Captain Comet begins his career of fighting aliens, robots and other odd menaces (with art by Murphy Anderson in most of his appearances). 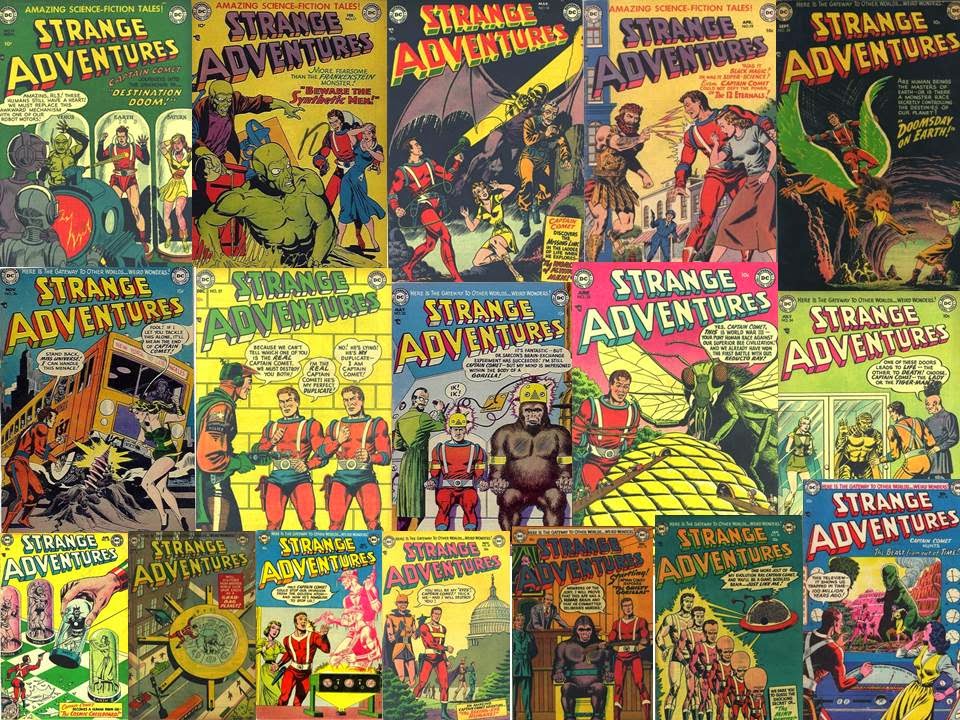 Captain Comet could also be called the first Silver Age hero (as his debut was separate from the Justice Society of America, yet before the Martian Manhunter in Detective Comics #225 or Flash/Barry Allen in Showcase #4).  Along the way, he also picked up a girlfriend, librarian Lucy Torrence with Strange Adventures #11 (Carmine Infantino's last drawn issue), and their adventures run from Strange Adventures #9-44, 46 and 49 (49 coming out in October, 1954). 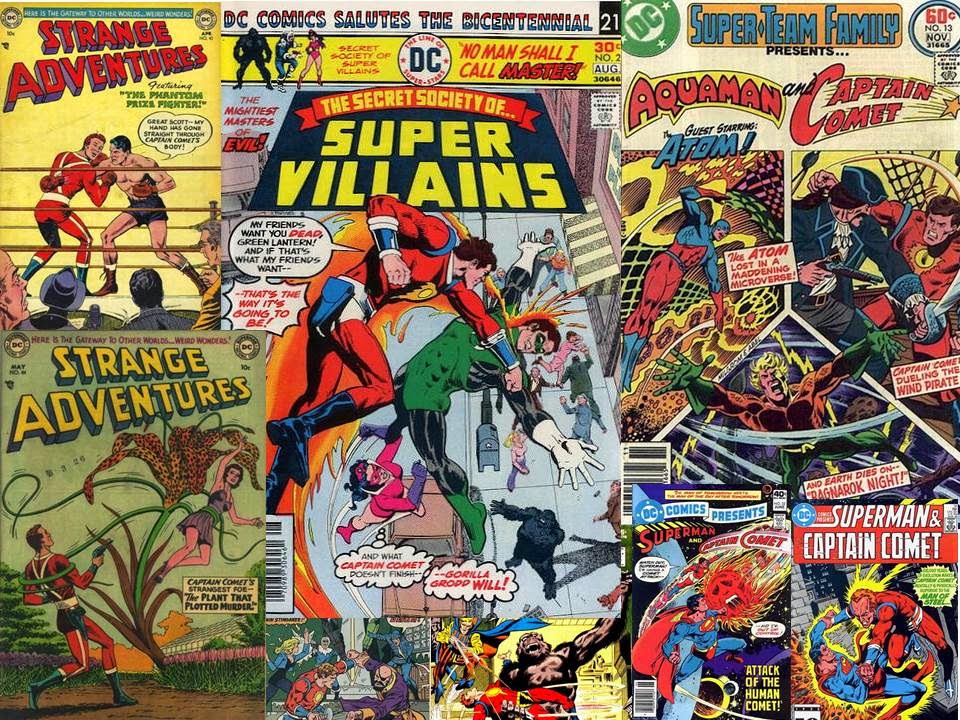 Captain Comet then left Earth, not to return until Secret Society of Super-Villains #2 (July-August, 1976) where he fought Green Lantern (a character that used some basic ideas established in Comet's own series such as the Guardians of the Universe) mistakenly thinking GL was the villain.  Captain Comet soon learned the truth, and aided the Justice League (and members of the Teen Titans as well) against the Secret Society for the rest of that series run (until the series was cancelled).  Captain Comet popped up meeting with Superman in two issues of DC Comic Presents (#22 and #91), attended the Atom's wedding in Justice League of America #157...and worked with the Forgotten Heroes in the Crisis on Infinite Earths as well. 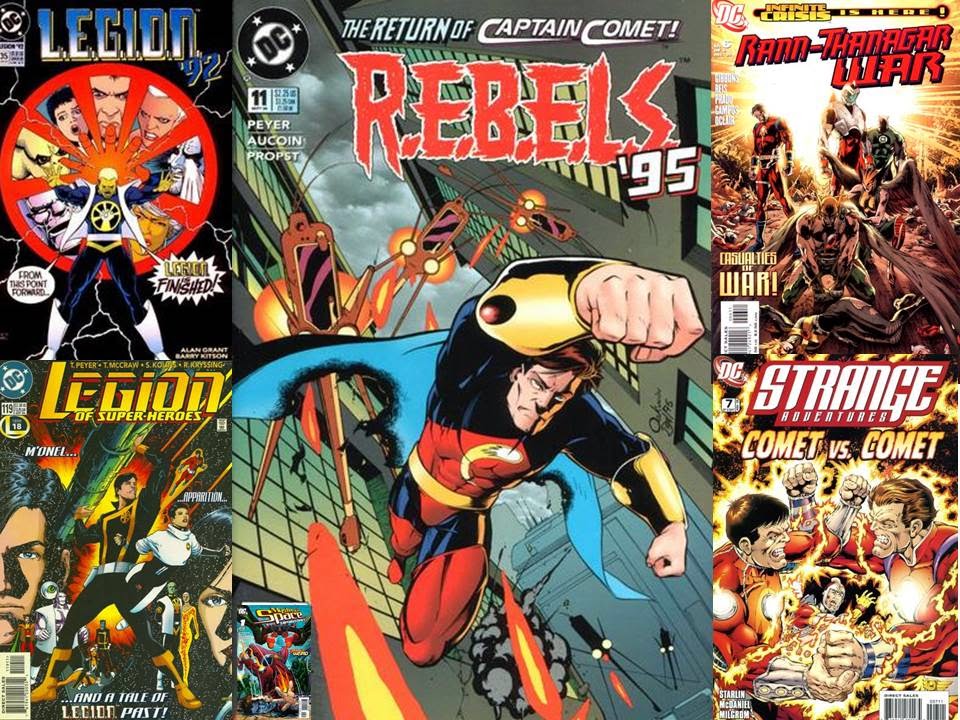 After the Crisis, the Captain worked with the L.E.G.I.O.N. and R.E.B.E.L.S. (two groups of interstellar police that worked under Vril Dox, the "son" of Superman foe, Brainiac) and more recently, was teamed with other outer space heroes (like Adam Strange, Hawkman, the Weird, Starfire and Starman) in the Rann-Thanagar War, Infinite Crisis, 52, Mystery In Space and back to a new volume of Strange Adventures before Flashpoint rewrote DC history (yet, Captain Comet came back in Action Comics to face the New 52 Superman!). 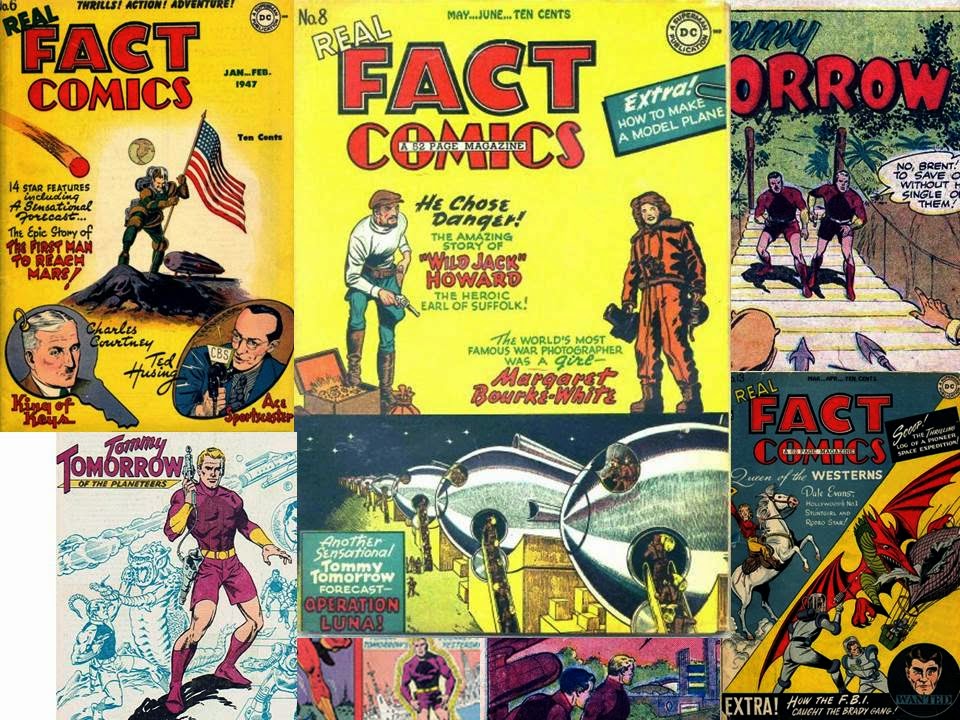 Tommy Tomorrow was a famous 21st century spaceman, working as a Colonel in the Space Planeteers, keeping the Earth and other people safe from menaces and criminals!  Tommy first appeared in Real Fact Comics #6 in the "Columbus Of Space" (by writers Jack Schiff, George Kashdan, and Bernie Breslauer and artists Howard Sherman and Virgil Finley).  Tommy comes back for issues #8, 13 and 16, but only made the covers shown.  These issues also have facts that are contradicted in later issues of Tommy's regular series, which run as back-ups in Action Comics from #127-251, then World's Finest Comics #102-124, until DC tried to give Tommy and his friend and fellow Planeteer Capt. Brent Wood his own series with issues starting with Showcase (#41 in November-December, 1962 by Arnold Drake and Lee Elias), who did all of Tommy's appearances in Showcase (#41, 42, 44, 46 and 47), but this series ended up being the first real failure of Showcase...Tommy didn't graduate into his own book, instead, not appearing until the DC Special mentioned above. 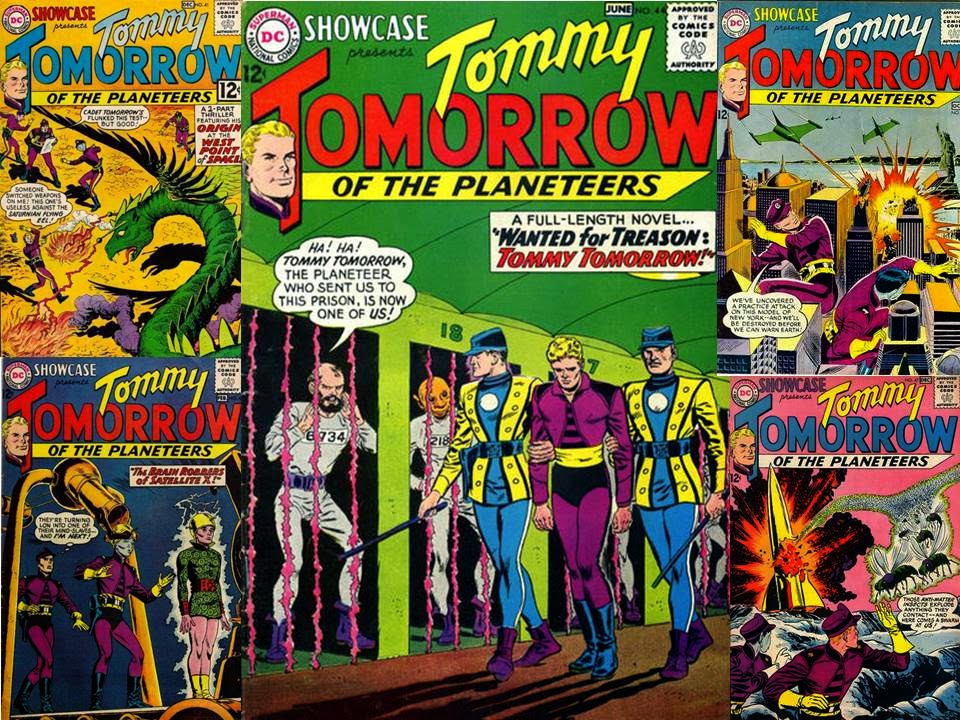 Tommy did show up in Crisis on Infinite Earths, wherein at the end of the timeline, it was revealed that Kamandi, the Last Boy on Earth, grew up to be Tommy Tomorrow (after being found by Horatio Tomorrow...a story which contradicts Action Comics #255 of August, 1959, in which Supergirl met the young boy Tommy in the 21st Century in a story by Otto Binder and Jim Mooney....but, she was erased from DC history for a time as well).  Tommy Tomorrow came back in a series called Twilight by DC in 1990 by Howard Chaykin and Jose Luis Garcia-Lopez (which also included the Star Rovers, the Space Museum, Manhunter 2070 and Star Hawkins), but that had little to do with the rest of the DC Universe....unlike the villain of the piece!

Man Out Of Time 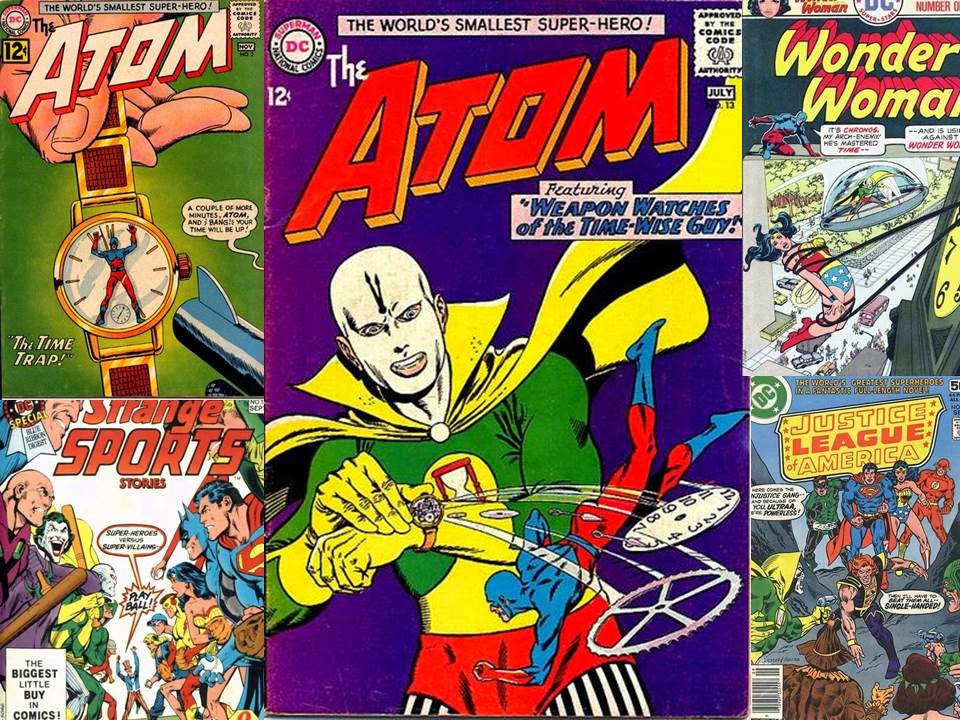 Chronos was a foe of the Atom, starting with Atom #3 (October-November, 1962 by Gardner Fox and Gil Kane).  David Clinton started off as a thief with obsessed with time, and later matures into a major DC villain, joining the Crime Champions, the Time Foes, Secret Society of Super-Villains, and the Injustice Gang of the World (and even plays baseball against the heroes with a group of villains, which he did just before participating in this story), as well as facing Elongated Man, Wonder Woman, Superman & Batman and Blue Beetle (as well as come later encounters with dinosaurs, and even inspiring a heroic Chronos, aka Walker Gabriel who had 12 issues of his own in 1998-1999). 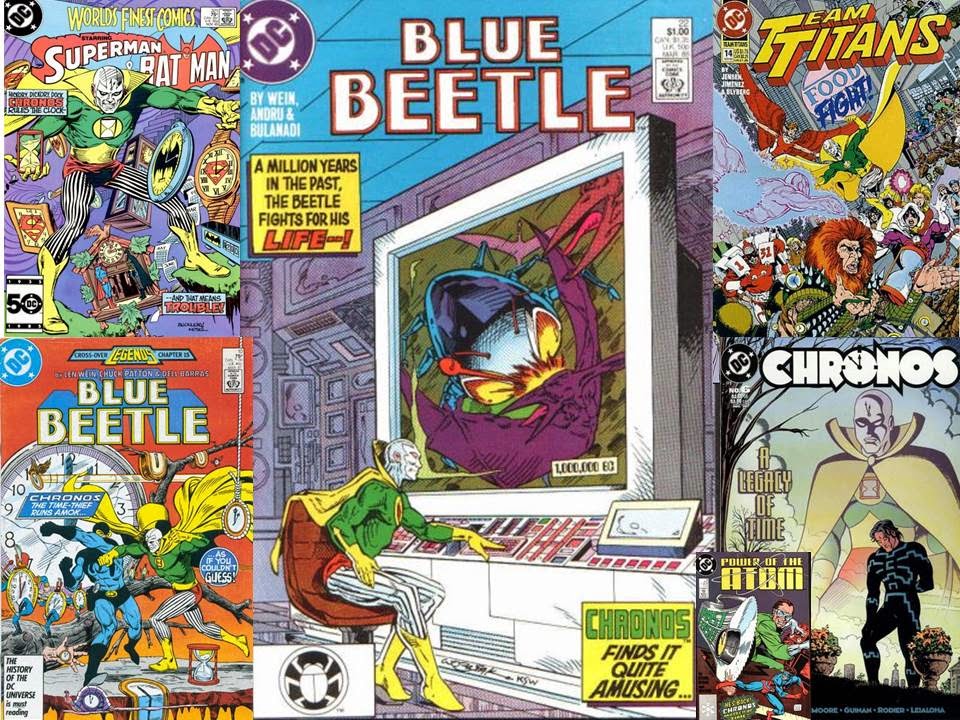 For the purposes of this story, Chronos causes the problem which brings Tommy Tomorrow into the present day, as well as the dinosaurs, including the mutated dinosaur man seen on the cover, Tyrano Rex bringing us full circle!  This dinosaur man was mutated by a meteor and traveled through time to the modern day just to be defeated by Tommy Tomorrow and Captain Comet, proving that dinosaurs and radiation just shouldn't mix!

Posted by Dave's Not Here Comic Blog at 8:03 AM