DC Heroes That Should Be On CW's Arrow 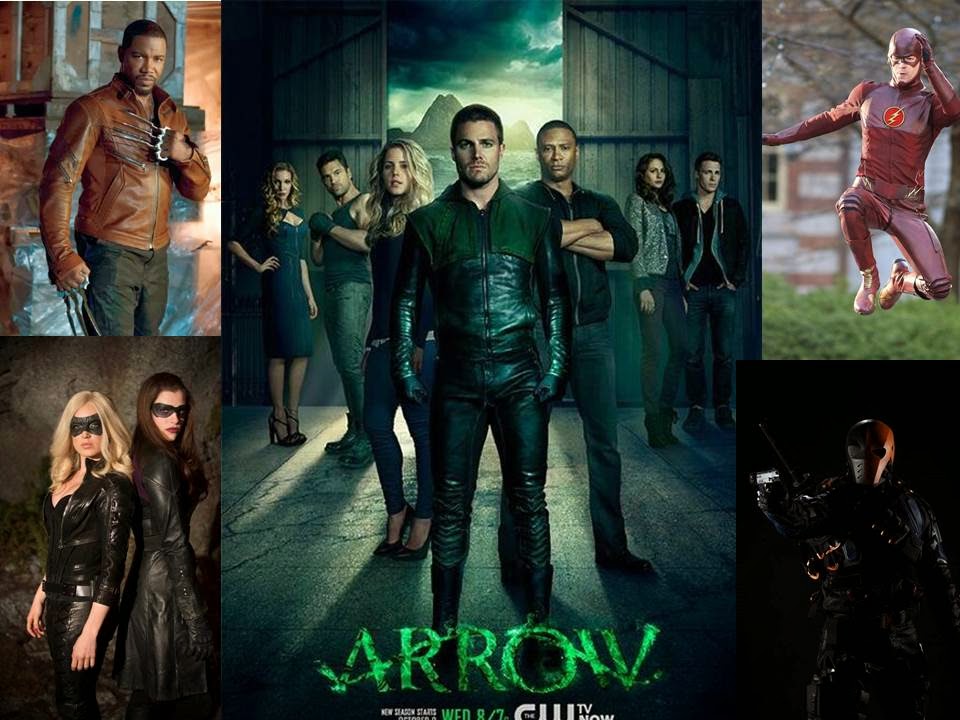 With its second season ending, the CW's Arrow has done a great job of introducing TV fans to the heroes of the DC Universe, with appearances by Black Canary, Bronze Tiger, Amanda Waller (and the whole Suicide Squad), even returns for Deathstroke and the Huntress (who on the series fall into the villain category, but were heroes in the comics....) and a teaser for Barry Allen (who, with a burst of lightning, will be the Flash...). 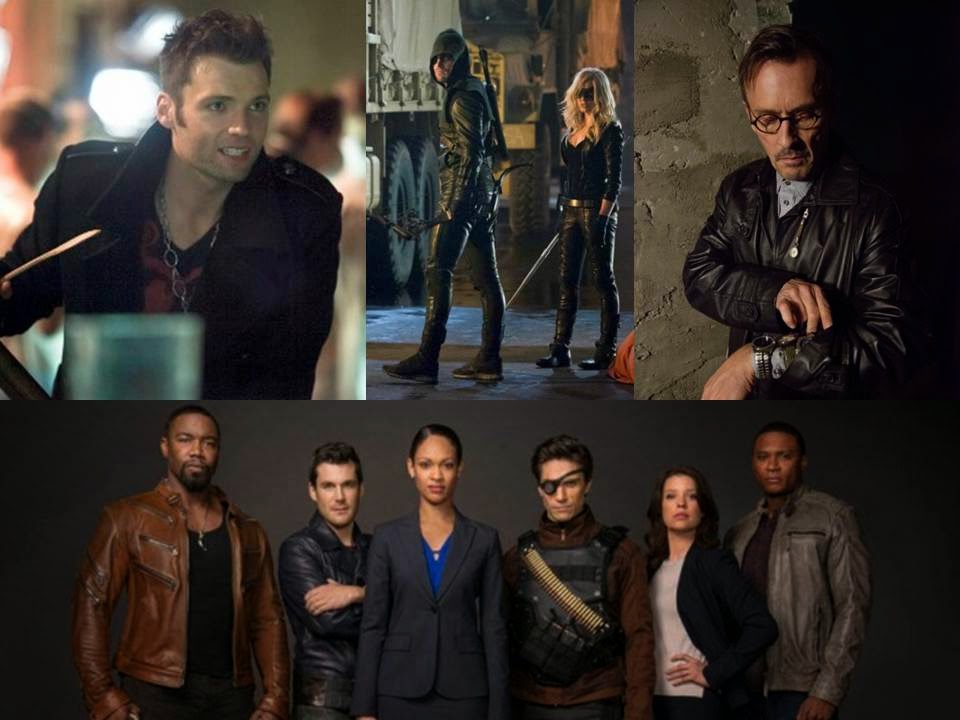 Still, a few more heroes could always appear (as could villains, after all, Count Vertigo and the Clock King were major Green Arrow villains, who ended up as members of the Suicide Squad in the comics, but not yet on the show).

Here are a few (along with their relationship to "Team Arrow" and other fun facts) and why each of these comic book heroes would work well on the CW's Starling City! 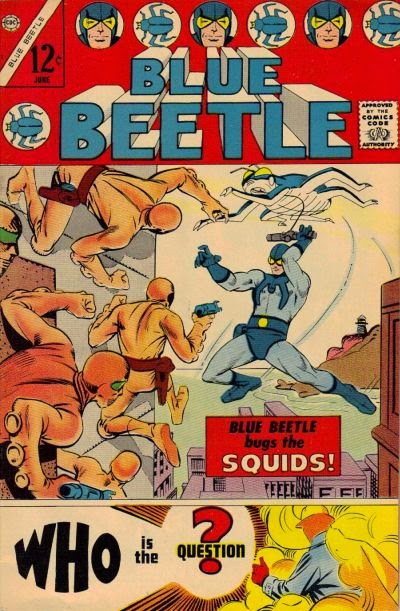 The Question.  Crusading TV reporter Vic Sage decided it wasn't enough to report on crime, but with the help of Professor Rodor and an artificial skin he invented, came up with his crimefighting alter-ego, the Question, just a faceless man on the street, fighting crime as hard as he could..since the days of being a back up feature in Blue Beetle #1 (June, 1967 by Steve Ditko, for five issues, as well as having a solo one-shot with Mysterious Suspense).  If the trenchcoated hero looks familiar, his look and motive was the basis for Rorschach of the Watchmen though DC thought they had more potential with the Charlton characters.... 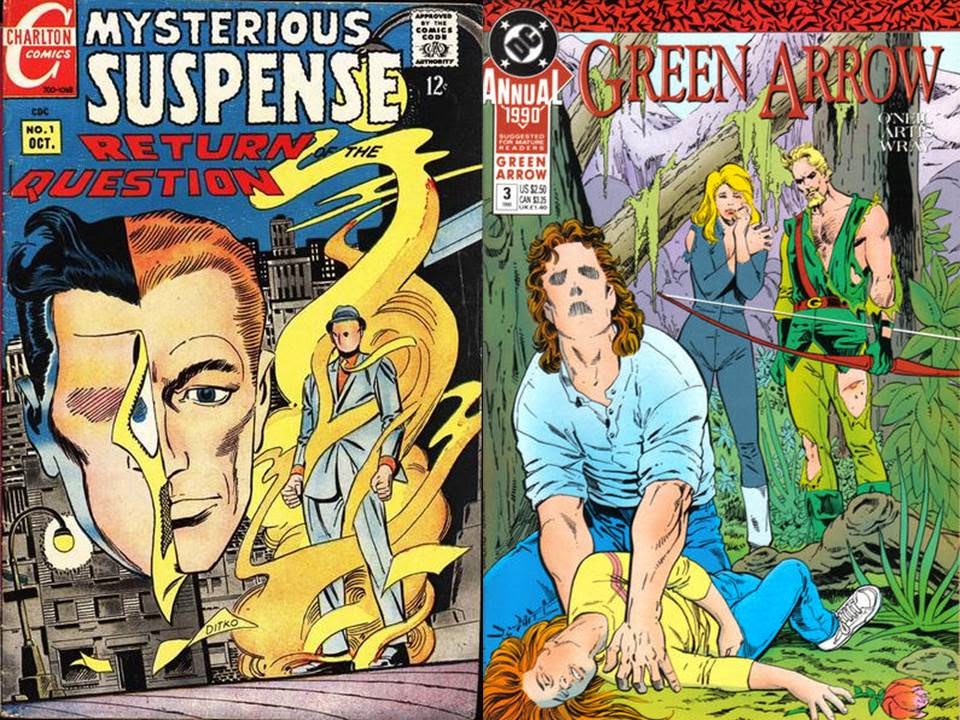 When DC Comics acquired the Charlton characters, the Question ended up with his own title, and got trained by Richard Dragon (a martial artist, who had been friends with Ben Turner, aka the Bronze Tiger), and then ran into Green Arrow (and Black Canary) more than a few times (most notably in both Question Annuals, as well as in the first 3 Green Arrow Annuals).

The Question had also worked quite a bit with the next candidate....

A Gem Hidden In Plan Sight 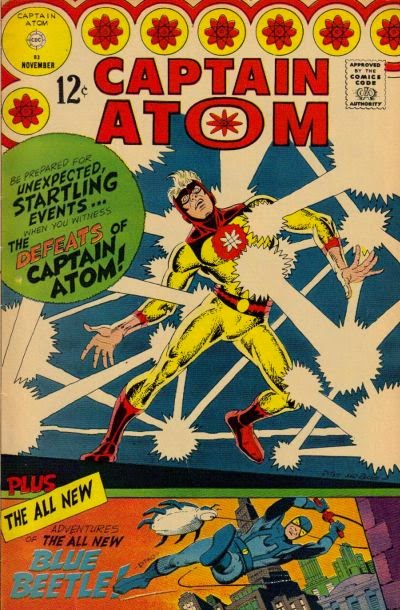 Blue Beetle.  Ted Kord was a student of Dan Garrett's (the first, gem-powered Blue Beetle), who was killed on an island owned by Ted's uncle, Jarvis Kord, who was using the island to make an army of androids to take over the Earth.

Ted assumed the mantle of the Blue Beetle, but had been unable to get the mystic scarab that powered the original, so, instead used technology (including his BB-gun and flying ship, the Bug) since Captain Atom #83 (November, 1963, by Steve Ditko). 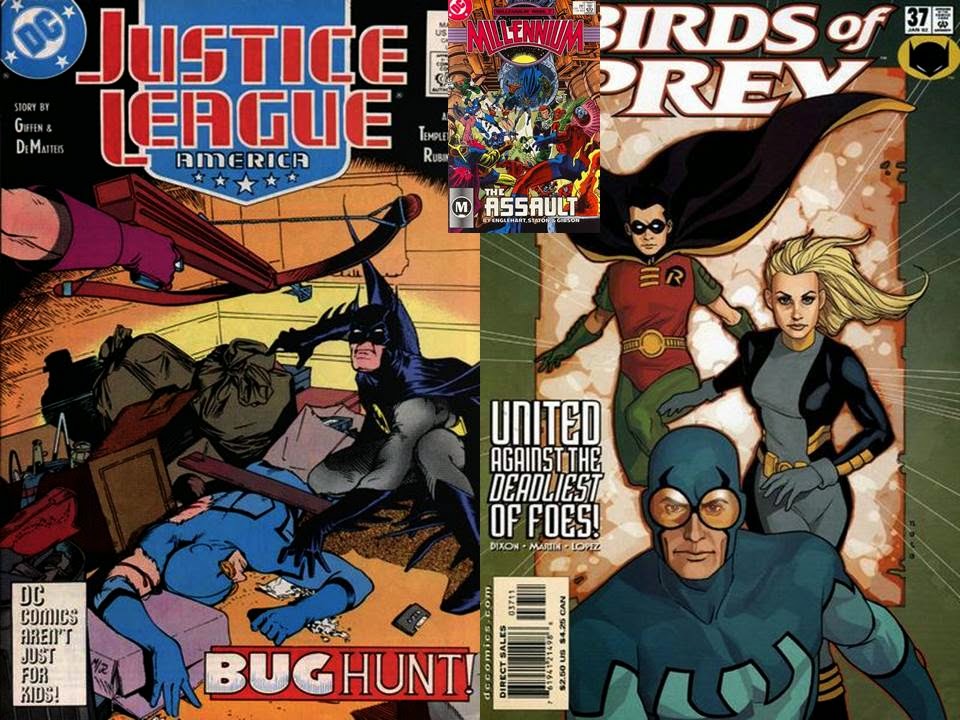 DC Comics used the Blue Beetle heavily in their Crisis on Infinite Earths series, and was the first Charlton character to get his own book (and to join the Justice League, where he worked with Black Canary).  Blue Beetle also worked with the Huntress, and even later, with the Birds of Prey.

The Arrow series has even mentioned Ted Kord himself, as well as his company, Kord Industries, so why not have the man swing into action himself? 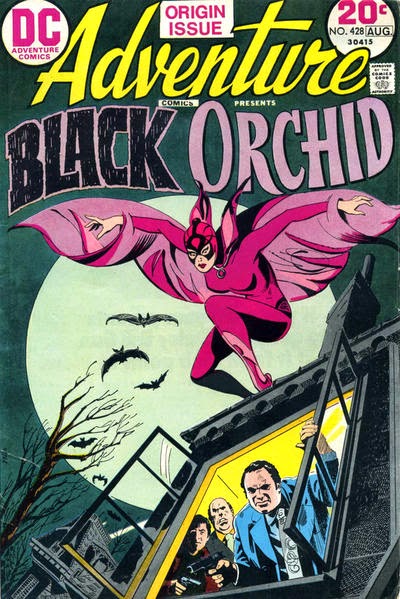 Black Orchid.  Pre-Crisis, the Black Orchid had no origin, she was just a woman who fought crime with her strength, speed, invulnerability and disguise ability.  As of Adventure Comics #428 (July-August, 1973 by Sheldon Mayer and Tony DeZuniga), Black Orchid would infiltrate a criminal's operation (pretending to be a maid, secretary, waitress, etc) and get the information needed to bring them down.  One of the great mysteries of the Black Orchid run was her origin, because, even though the cover promised it was an origin issue, her origin was never given during the early years (Neil Gaiman did it later when reviving the character for a mini-series....) 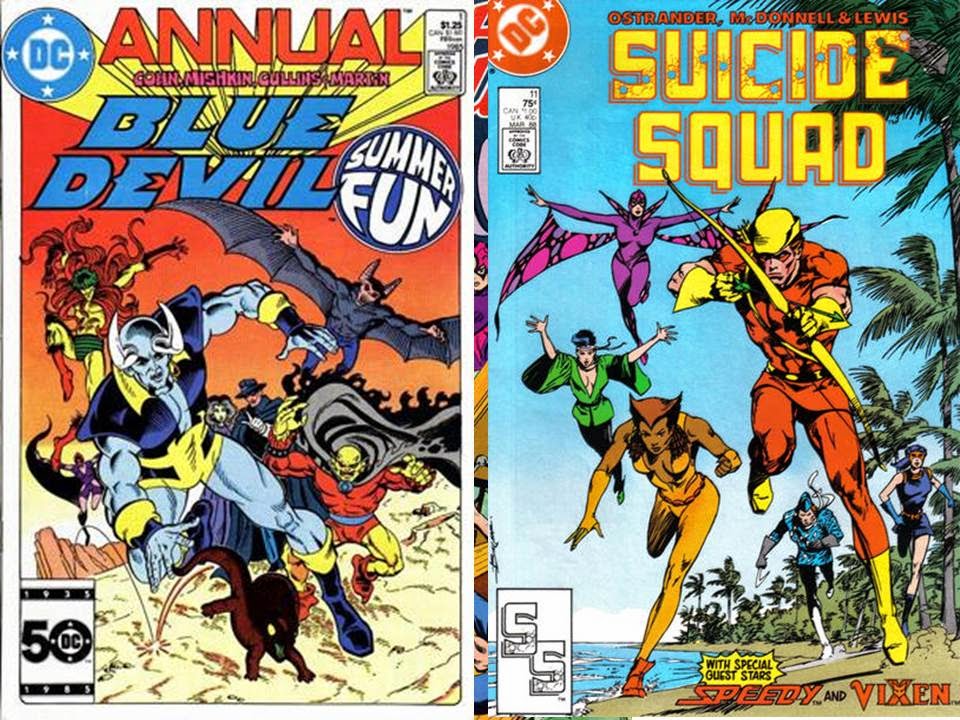 The Black Orchid did this in Adventure Comics #428-430, and some back-ups in Phantom Stranger from #31-41, and Blue Devil Annual #1 (as well as the Crisis on Infinite Earths) before joining the Suicide Squad with their original issue #2.  She even worked with Speedy (Roy Harper, himself a government agent, before he got his Arsenal identity) for a few issues, so while all the super-powers she has might be more than the usual for the Arrow series, her basic operations might work well in the Arrow world. 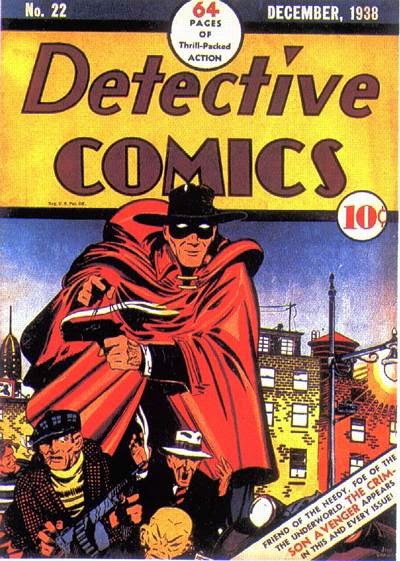 Crimson Avenger.  Lee Travis was the publisher of a newspaper, and a weary World War I veteran who was wandering the world trying to find a purpose...and found one in the far-East temple of Nanda Parbat (where he was granted a vision of a noble man with a red cape who would die saving us all from doomsday...this addition to Crimson Avenger's history was from John Ostrander).  This gave him the clarity to become the Crimson Avenger (starting with Detective Comics #20, October, 1938, by Jim Chambers...making him a hero that existed before Batman!  Crimson Avenger's first cover wasn't even until Detective Comics #22). 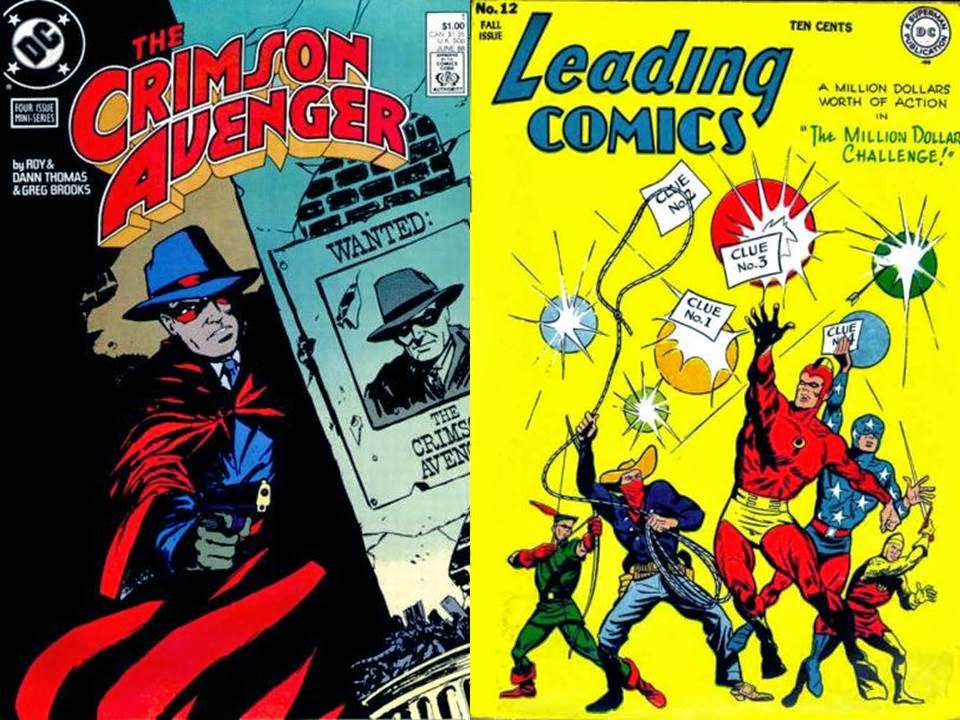 The Crimson Avenger was a pulp style hero (think of the Shadow, or Green Hornet....as the Crimson Avenger also had an oriental sidekick named Wing and a gas gun that made a crimson cloud, all ideas that were popular for heroes of the 1930s before the mystery men really started to appear...he even dealt with invading aliens...almost...thanks to Orson Welles and a story by Roy Thomas as another addition to his secret origin).  Later, Lee Travis (and Wing) adopted a more traditional super-hero look, and even joined Green Arrow and Speedy as members of the Seven Soldiers of Victory (with Wing as the unofficial eighth member)...thus, seems seeing Crimson Avenger work with the Arrow would be a natural! 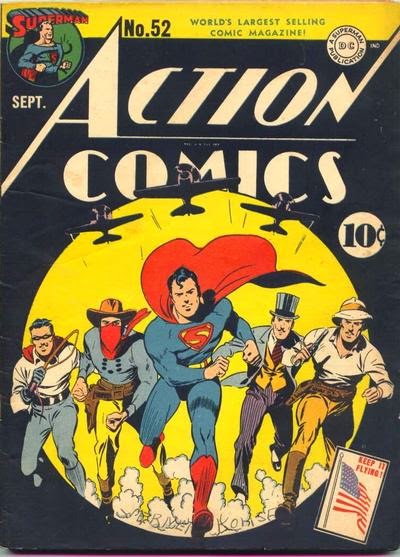 Vigilante.  Greg Saunders was known as a country singer, the Prairie Troubadour, who lost his sheriff father to a gang of bandits and adopted the Western themed Vigilante identity to bring them in (starting with Action Comics #42, November, 1941, by Mort Weisinger and Mort Meskin, and first cover, non-team was on Action Comics #52) and continued to be a hero for quite some time! 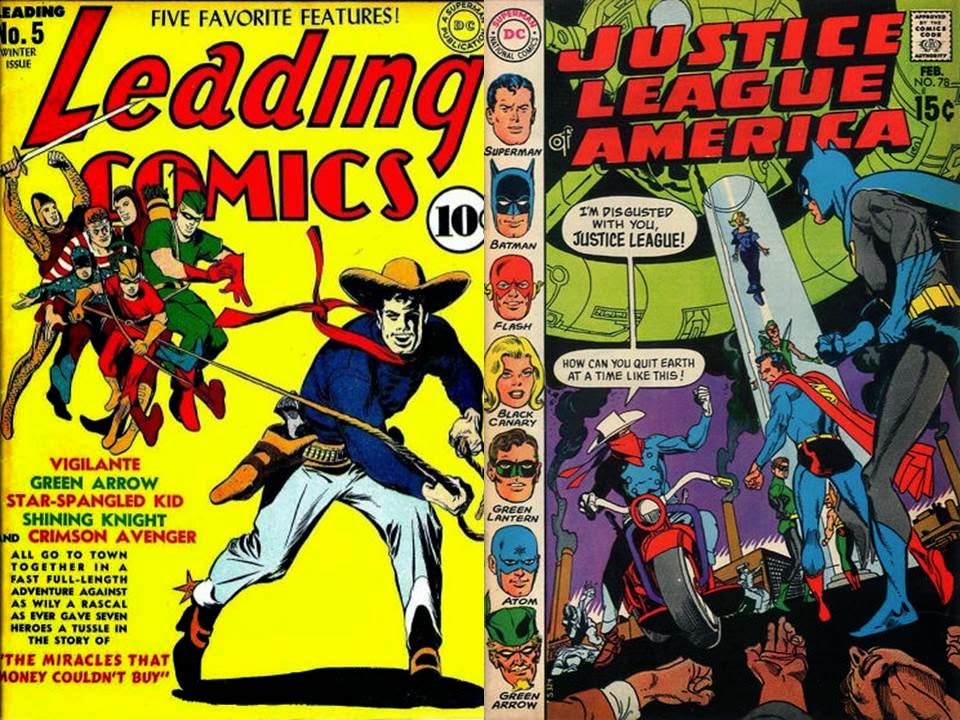 The Vigilante was a old fashion cowboy type fighting modern criminals with his six-shooter, lasso and horse (well, actually a pretty nifty motorcycle) and sidekicks Billy Gunn and Stuff the Chinatown Kid.  The Vigilante also joined Green Arrow and Speedy (as well as the Crimson Avenger, the Shining Knight, the Star-Spangled Kid and Stripsey) in the Seven Soldiers of Victory!

DC even had established the Vigilante as a separate hero, who teamed up with the JLA. 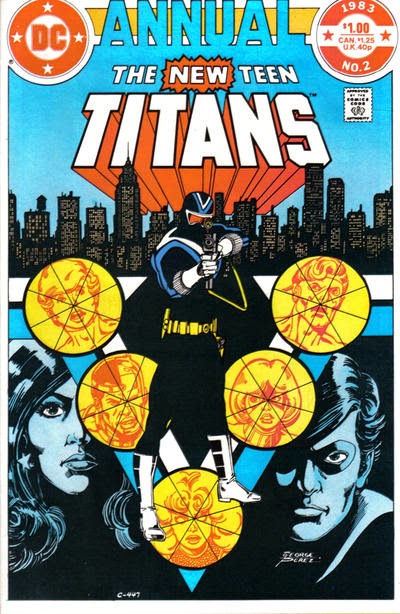 Vigilante.  Adrian Chase was a lawyer who worked with Robin of the Teen Titans in bringing down crime families in New York...and he was too good at his job, provoking the mob to kill his family in New Teen Titans Annual #2 (1983, by Marv Wolfman and George Perez; you might remember the law firm of Wolfman and Perez on Arrow) where Adrian then became the Vigilante. 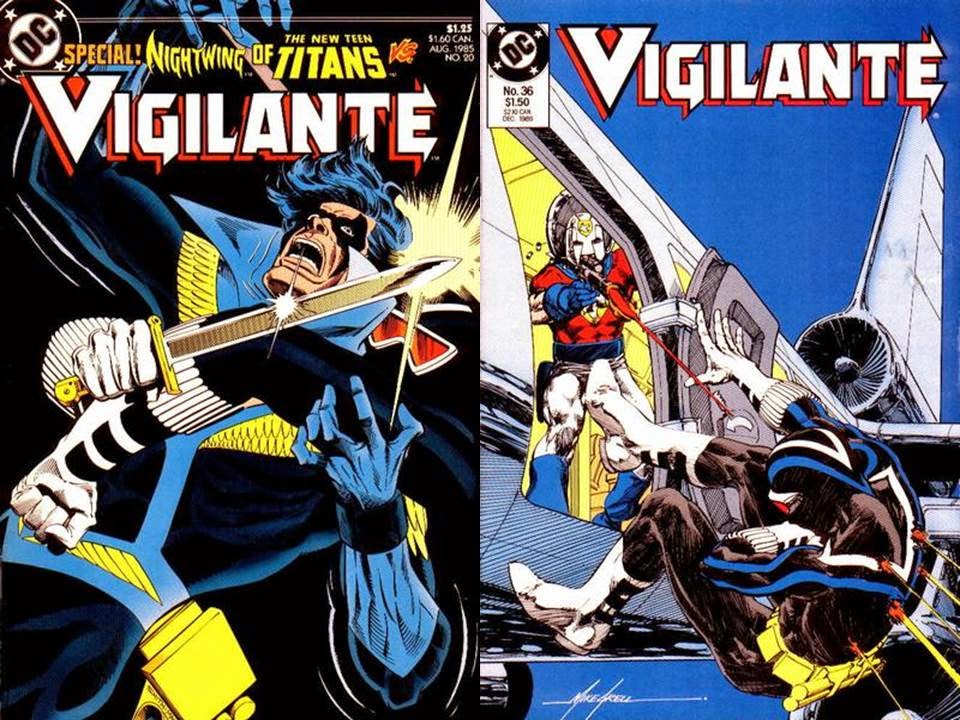 The Vigilante hunted down criminals with skills acquired with many weapons and a regenerative power over his 50 issues and 2 Annuals, as well getting assistance from a team of professionals (like J.J. Davis, who was his computer and weapons expert).  In his earlier issues (written by Marv Wolfman), Adrian struggled with the idea of killing criminals, and battled heroes (like Nightwing, who would later call Bludhaven home...a city mentioned on Arrow), and later, became obsessed when the Peacemaker killed officer Dave Winston (who had taken over the identity of the Vigilante for a time), and felt he had to bring this unbalanced hero to justice (in stories written by Paul Kupperberg, and covers by Mike Grell...the artist who also worked on Green Arrow on and off for decades, and provided the sketch of the Hood on the Arrow series).  The Vigilante also became more unbalanced himself, and this series lead to the foundation of Checkmate (an organization that Roy Harper worked for in his Arsenal identity). 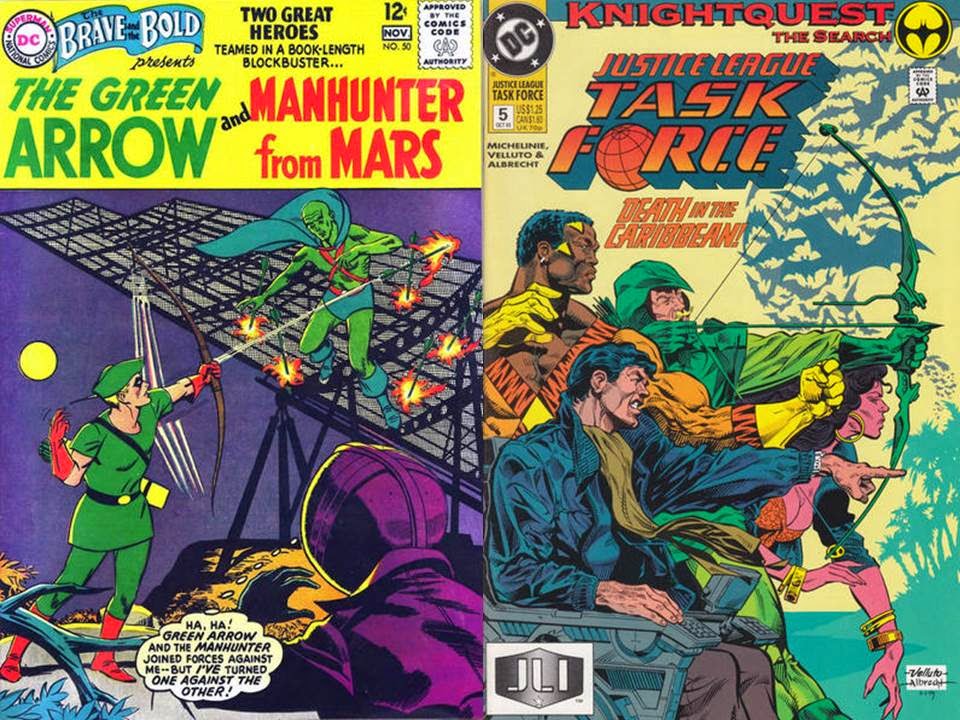 All these characters have ties to Green Arrow (some only slightly), but any would work well in the world set up on Arrow...and would suggest other characters to bring in as well!

Posted by Dave's Not Here Comic Blog at 7:42 AM