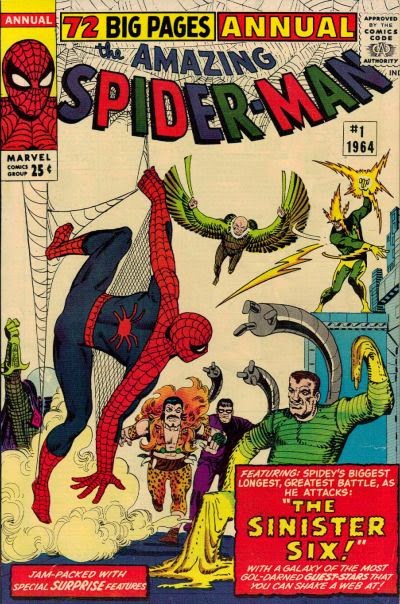 True, the Sinister Six are some of the Amazing Spider-Man's most devious villains...but they also had an effect on the rest of the mighty Marvel Universe!


The Sinister Six premiered in Amazing Spider-Man Annual #1 (January, 1964) by Stan Lee and Steve Ditko, and included 6 of Spidey's biggest, baddest foes (at the time...all also created by Lee and Ditko!).


This was the original gathering of this bunch, and certainly a tough task for Peter Parker to face...

One of Six: Electro 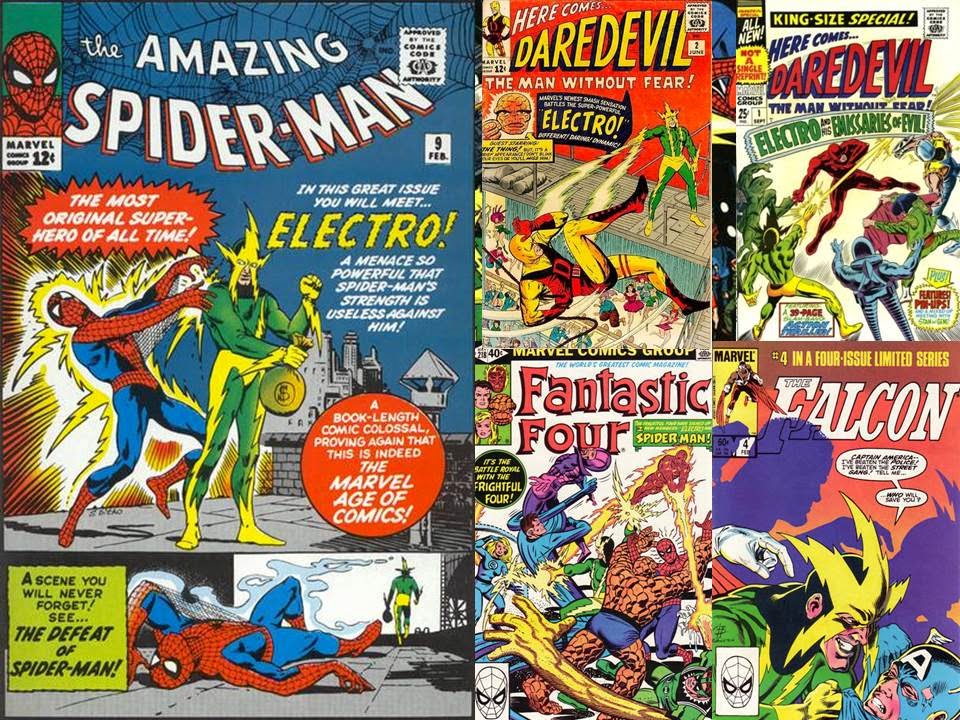 Max Dillon was an electrical lineman who, due to a freak accident gained electrical powers and set about on a life of crime, starting with Amazing Spider-Man #9 (February, 1964).


Electro quickly branched out as well, fighting Daredevil (even founding his own group of villains, the Emissaries of Evil with Leap-Frog, the Stilt-Man, the Matador and the Gladiator) and he later joined the Frightful Four (a group of villains that gathered together to fight the Fantastic Four including the Wizard and Trapster, as well as some later on this list) as well as battling against Captain America's partner, the high-flying Falcon! 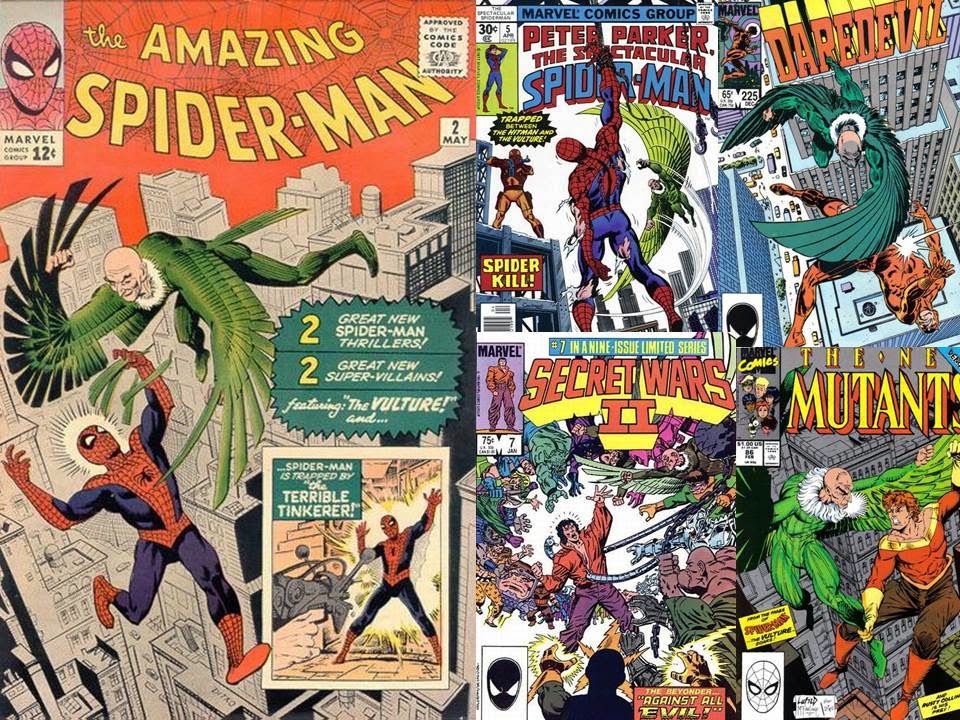 Adrian Toomes was an electronics engineer who was cheated out of a fortune by his business partner, and then took his own flying harness to become the Vulture (in Amazing Spider-Man #2, May, 1963)  and avenge the wrongs felt done to him.

The Vulture was a more elderly villain, set in his ways, and stayed in New York to face Spider-Man mostly, though occasionally he fought others like Daredevil and the Punisher, and even facing off against the Beyonder in Secret Wars II and Rusty Collins of the New Mutants! 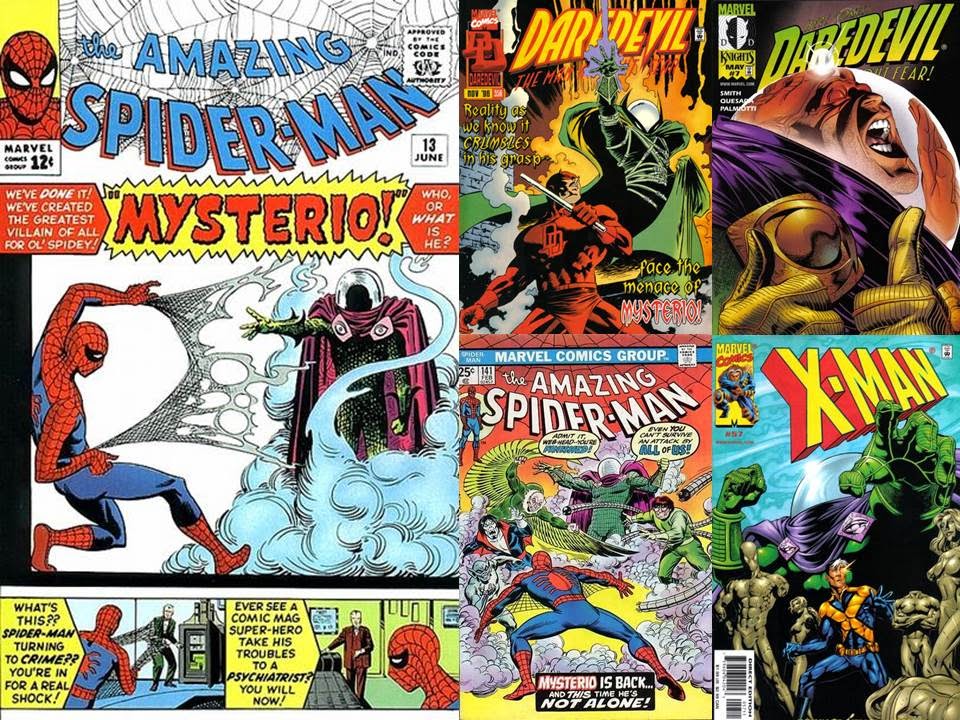 Quentin Black was a master of misdirection, he worked with special effects and was a stuntman on the side, and started his individual battles with Spider-Man in Amazing Spider-Man #13 (June, 1964).

Mysterio worked as an unnamed assistant to the Tinkerer (a foe Spidey first fought in Amazing Spider-Man #2), but continued to bedevil Spider-Man over the years using tricks like a fog that nullified Spider-Man's Spider-Sense and other tricks to make Peter Parker doubt himself.  Like most Spider-Man villains, he also ended up facing Daredevil...and the one and only X-Man as well! 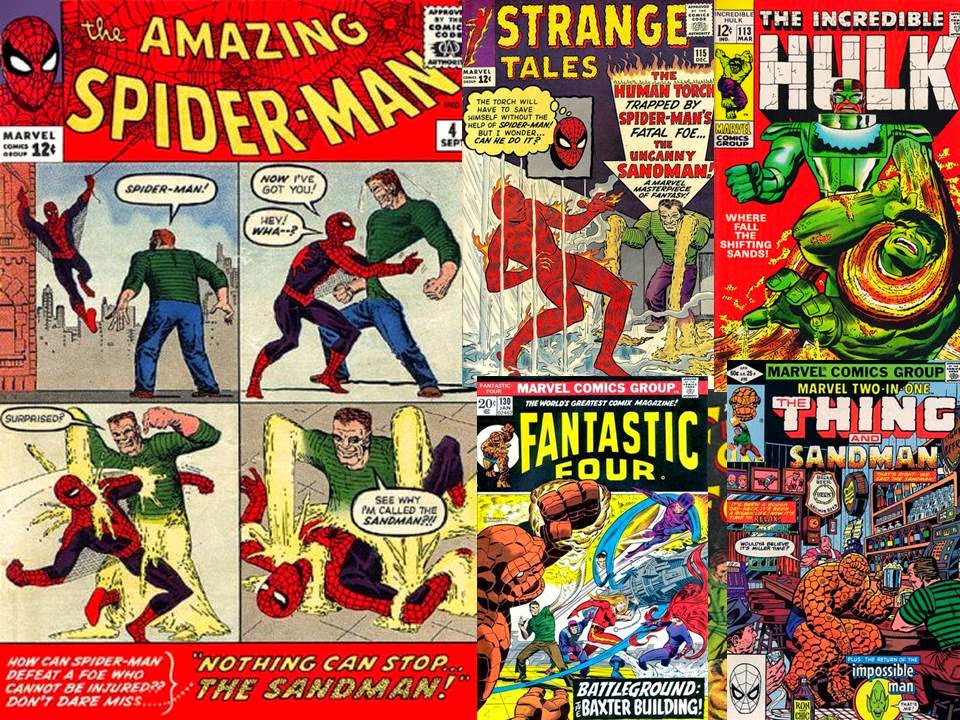 Flint Marko was his name and he was a thug...or just a good little mama's boy named William Baker, until, while trying to escape the police, he came into contact with sand irradiated from a local nuclear plant, and left his normal problems on the beach (with Amazing Spider-Man #4, September, 1963).

Sandman started his career menacing Spider-Man, but soon branched out, facing the Human Torch alone in Strange Tales, joining the Sinister Six, then being a founder of the Frightful Four (along with the Wizard, Trapster and Medusa).  Sandman even battled the Hulk, and then became friends with the Thing...trying to turn good for a time (even ending up as a provisional member of the Avengers) before going back to crime.

Five of Six: Kraven the Hunter 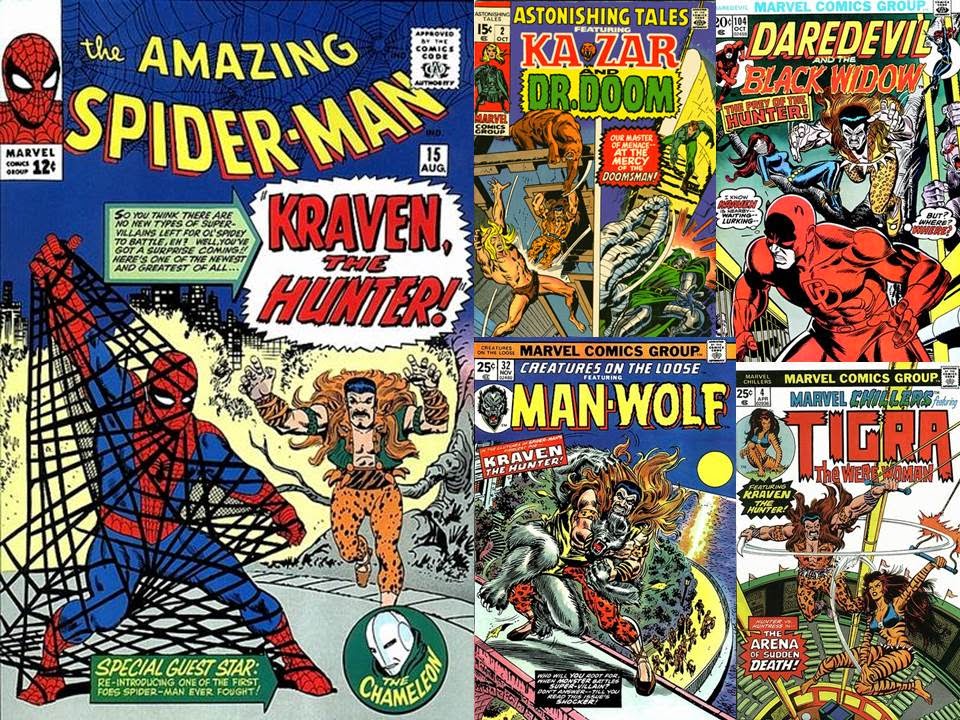 Sergei Kravinoff was a big game hunter and member of a family of Russian aristocrats who had to flee the country after the Communists took it over, and crossed paths with the amazing arachnid in Amazing Spider-Man #15 (August, 1964).

Kraven the Hunter fought Spider-Man with mucho gusto, and also battled with Iron Man, jungle lord Ka-Zar, Daredevil and the Black Widow, Spider-Man's foe the Man-Wolf, Tigra the were-woman and more, considering most heroes as big game, and it was later revealed Kraven was a member of a 1950s version of the Avengers!  Kraven even took on a nobility in facing Spider-Man in Fearful Symmetry: Kraven's Last Hunt by J. M. DeMatteis and Mike Zeck. 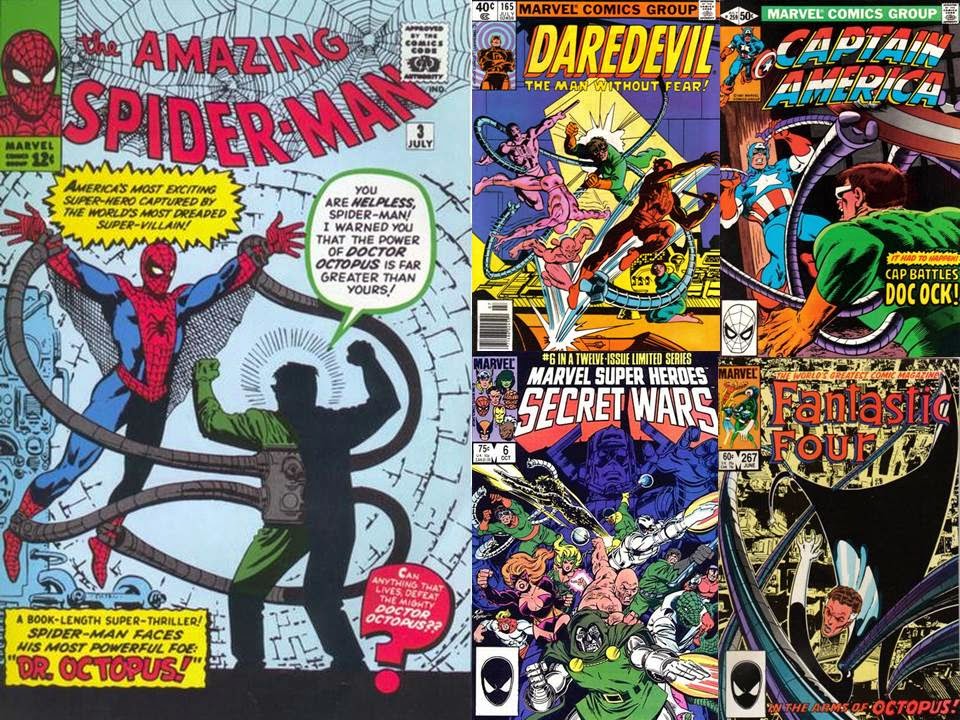 Otto Octavius was a young kid, bullied by those around him, including his father, so turned his attention to science, becoming a respected nuclear physicist, engineer and researcher... ....and while using a creation of his own (mechanical tentacles) to control a reaction, it went wrong in Amazing Spider-Man #3 (July, 1963). 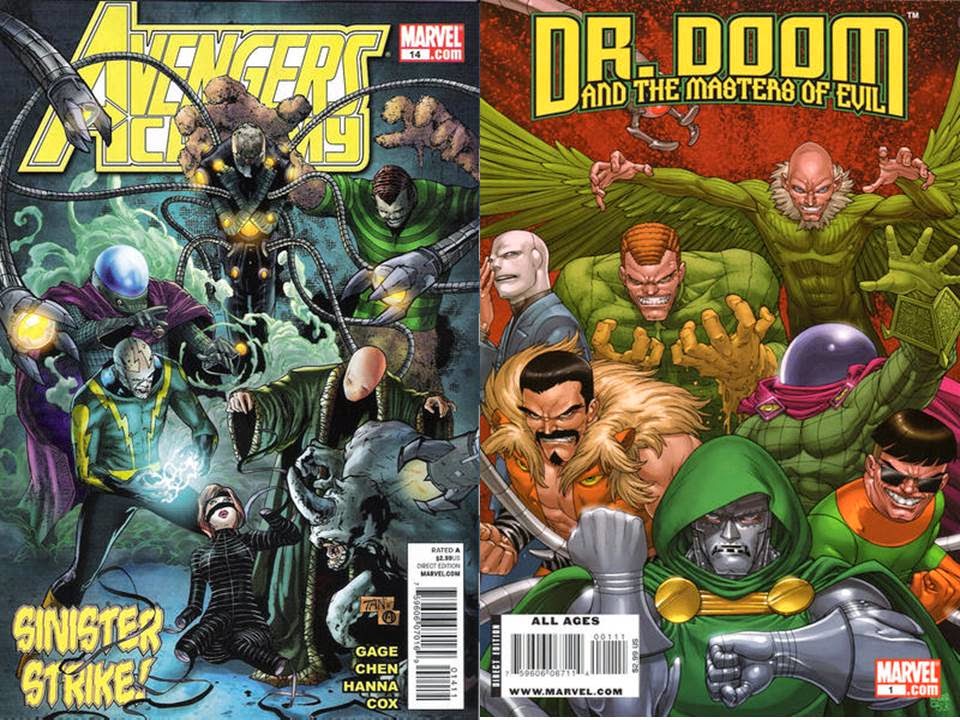 Dr. Octopus became one of Spider-Man deadliest villains, founding the Sinister Six to defeat Spider-Man.  For the most part, the doctor faced Spider-Man, but occasionally fought against other members of the Marvel Universe, like Daredevil (in a pre-Elektra story with plot and art by Frank Miller), Captain America (to get his shield and improve his tentacles) and Mr. Fantastic (of the Fantastic Four, for the life of Sue's baby).  Doc Ock even got recruited for the bad guys team for the original Marvel Super Heroes: Secret Wars, working with Dr. Doom, the Wrecking Crew, Absorbing Man, the Enchantress, Klaw, Ultron and more!   Dr. Octopus reformed the Sinister Six (having Hobgoblin replace Kraven, who had committed suicide...Chameleon has also been a replacement as well...). 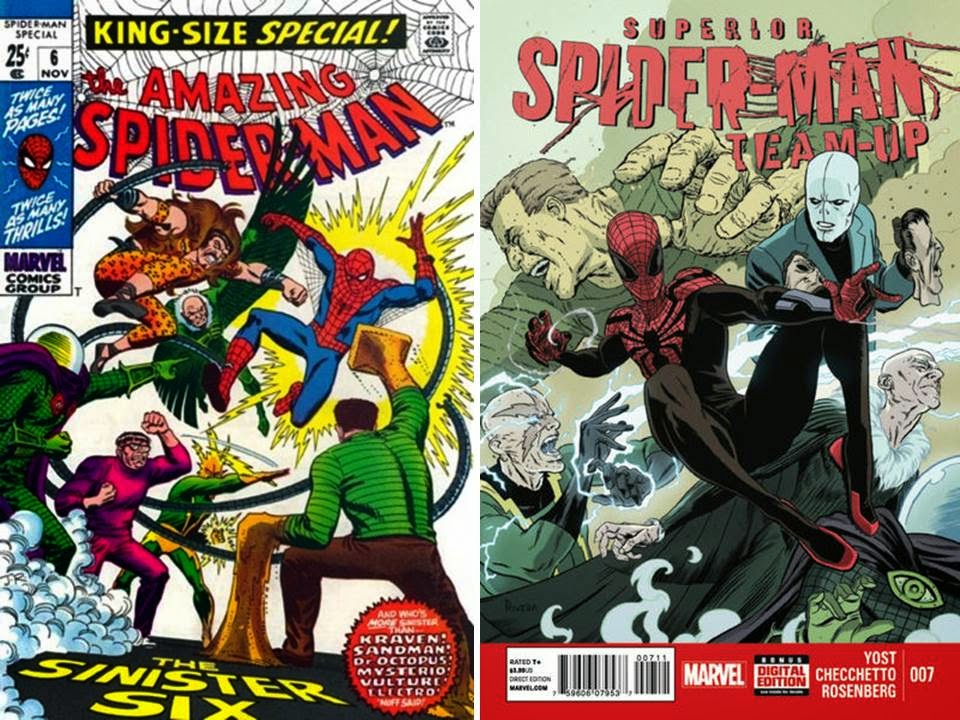 Doc Ock continues to menace Spider-Man to this very day, having replaced Peter Parker's mind in Spider-Man's body, and lives on as the Superior Spider-Man.

Still, all these villains will come back and face Spidey again, but they have proved their reach expands through the entire Marvel Universe and beyond!

Posted by Dave's Not Here Comic Blog at 7:03 AM