"Gentleman, we can rebuild him.  We have the technology.  We have the capability to build the world's first bionic man....Better than he was before.  Better.  Stronger.  Faster." 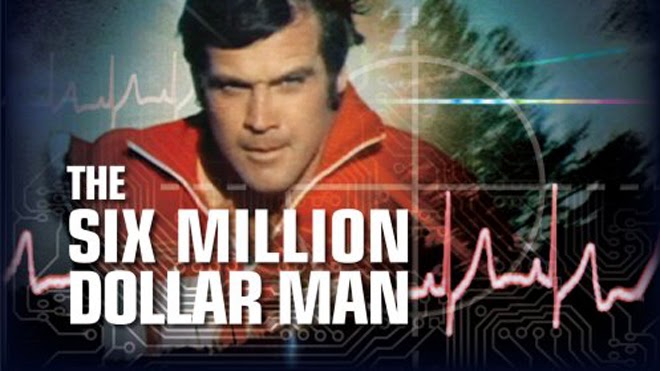 If you were a child of the 1970s, that coda lead you into an hour of adventure (regular episodes from 1974 to 1978) with Colonel Steve Austin...the Six Million Dollar Man.  Steve was a cyborg, who had a bionic arm, eye and two legs, and was assigned missions for the OSI (Office of Scientific Intelligence, a branch of the United States government) by Oscar Goldman (his friend and boss, and the reader of that statement opening the episodes).  On the television of the time, the Six Million Dollar Man was the closest there was to a super hero (the Incredible Hulk show didn't start until 1977, though episodes were written of that show by Kenneth Johnson, who also wrote for the Six Million Dollar Man; and we were nowhere near the current explosion of live action comic book super shows like the Spider-Man, Flash, Human Target, Birds of Prey, Painkiller Jane, Smallville, Arrow, Constantine, Agents of S.H.I.E.L.D. and Flash again!).

Col. Austin even went the opposite way...and headed into the world of comics! 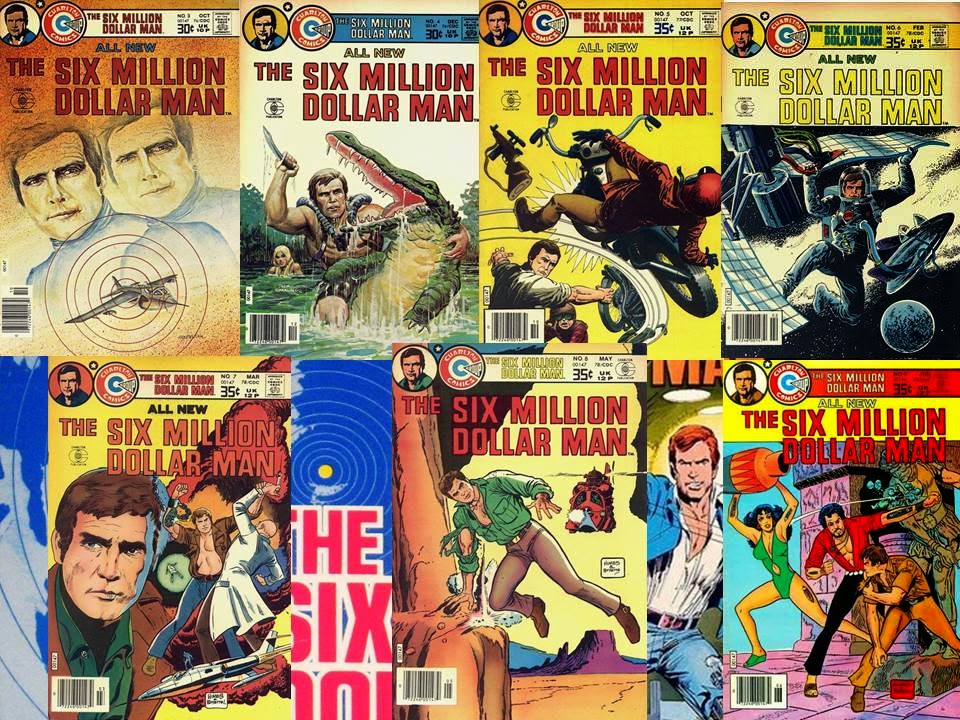 During these issues, Steve faced spies, robots, sharks, dimension hopping villains and even a mad scientist using his Kenner action figure against him!

Sadly, reoccurring series foes like the Bigfoot or Mars Rover did not make the transition into the comic books...but in the days pre-DVD, this was the only way to relive adventures of your favorite hero! 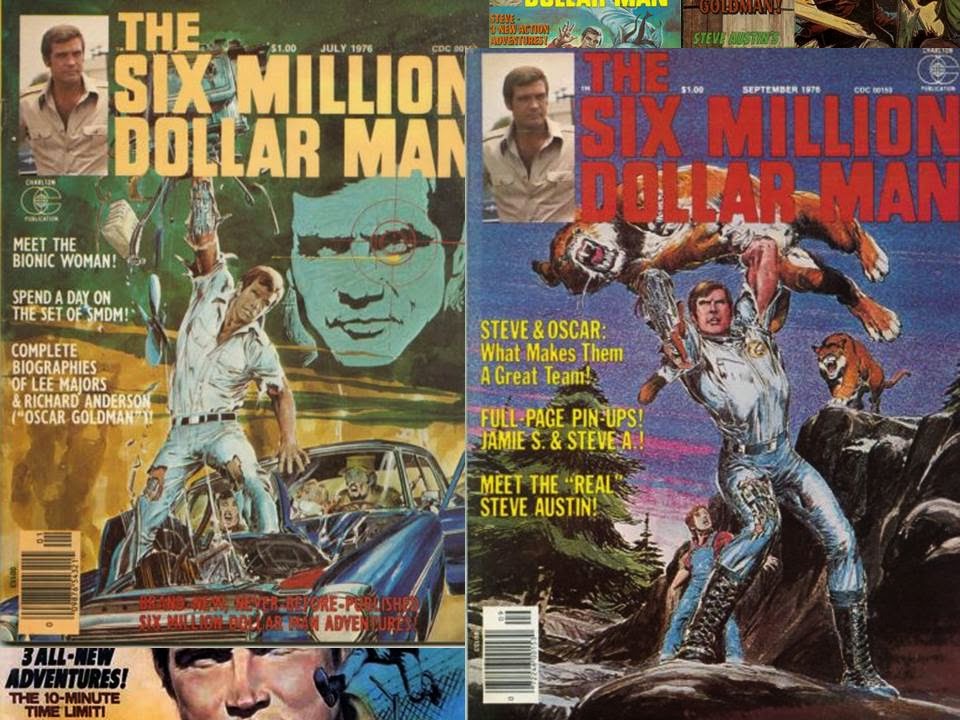 Due to the Comic Code Authority, and a desire to expand into the magazine market (and these were the days before the internet, so information behind the scenes on TV shows was limited), Charlton also published the Six Million Dollar Man magazine, which had 7 issues from July 1976 to November 1977, and though the covers were in color, the stories inside were in black & white (and had a slightly more adult feel to them...). 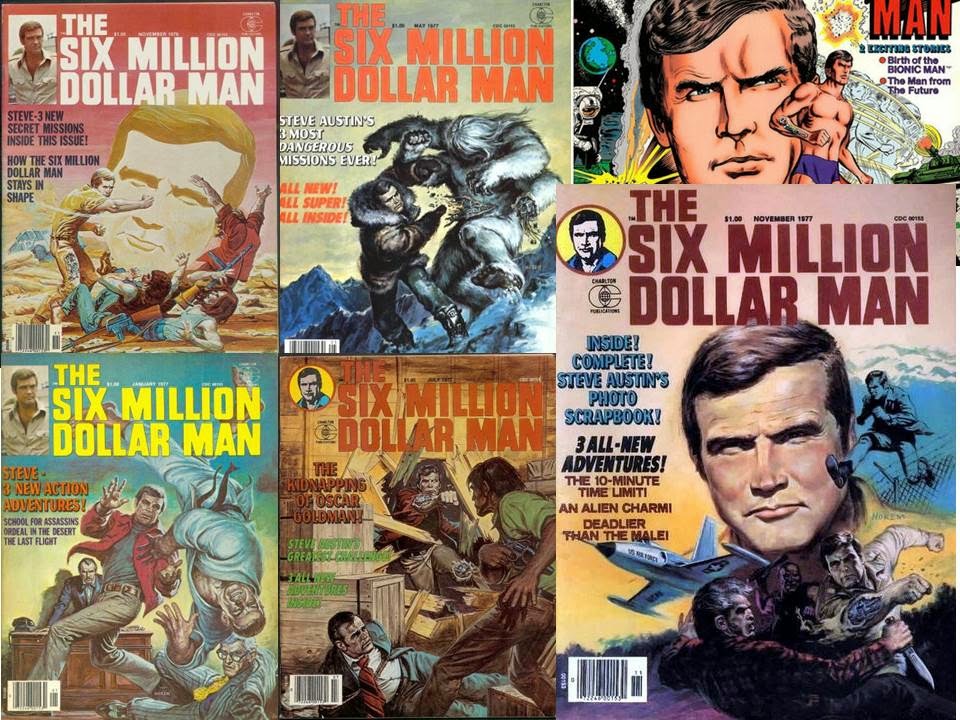 The magazine even had articles of the Bionic Woman...Jaime Sommers! 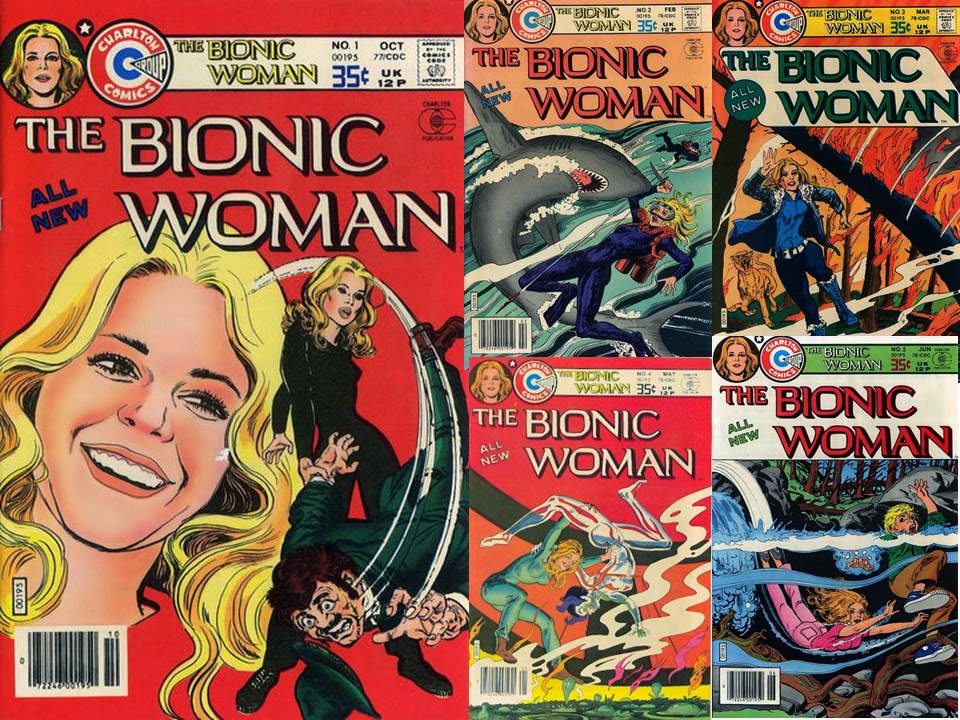 Charlton kept up with the Bionic universe by adding a Bionic Woman comic, starring Jaime Sommers!  It lasted 5 issues from October 1977 to June 1978, with art in all issues by Jack Sparling...but no writing credits to be found!


Mostly ordinary adventures here...but never with Steve and Jaime teaming up (which they did on the shows, mostly to face the Fembots and the aliens behind Bigfoot).

Return of the Bionic Man (and Woman) to Comics 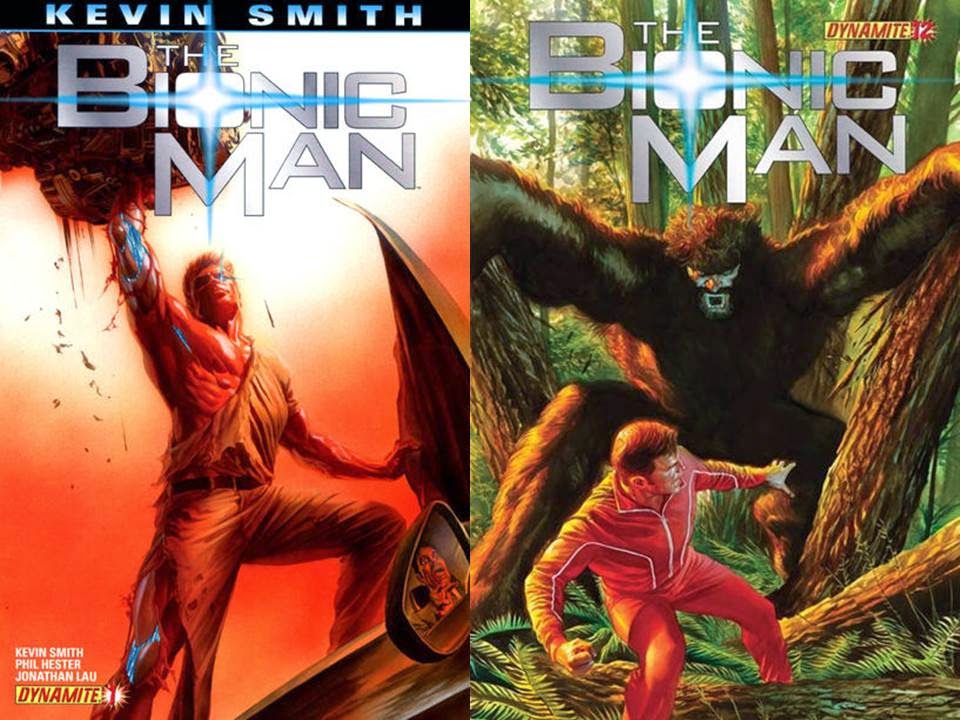 Steve Austin returned to comics as the Bionic Man for Dynamite Comics in August, 2011, with comics based on the original series written by Kevin Smith & Phil Hester, with art by Jonathan Lau (one cover by Alex Ross based on the magazine's first cover), based on an idea for a Six Million Dollar Man movie by Kevin Smith. 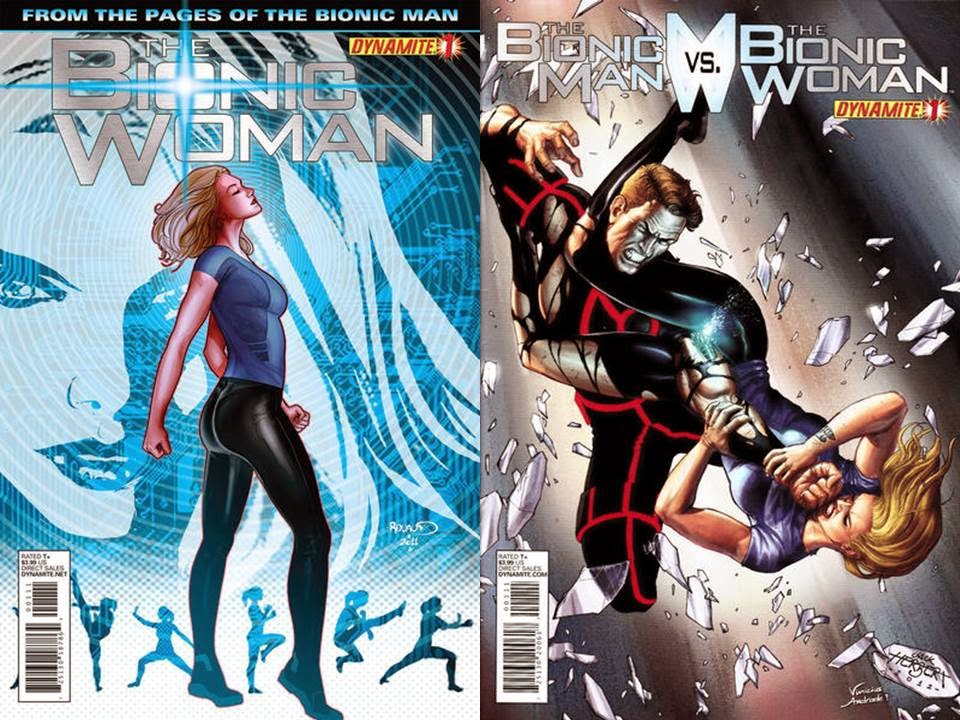 These weren't quite the classic Lee Majors' Six Million Dollar Man....but at least it gave the fans what they were looking for, more adventures of the whole bionic family! 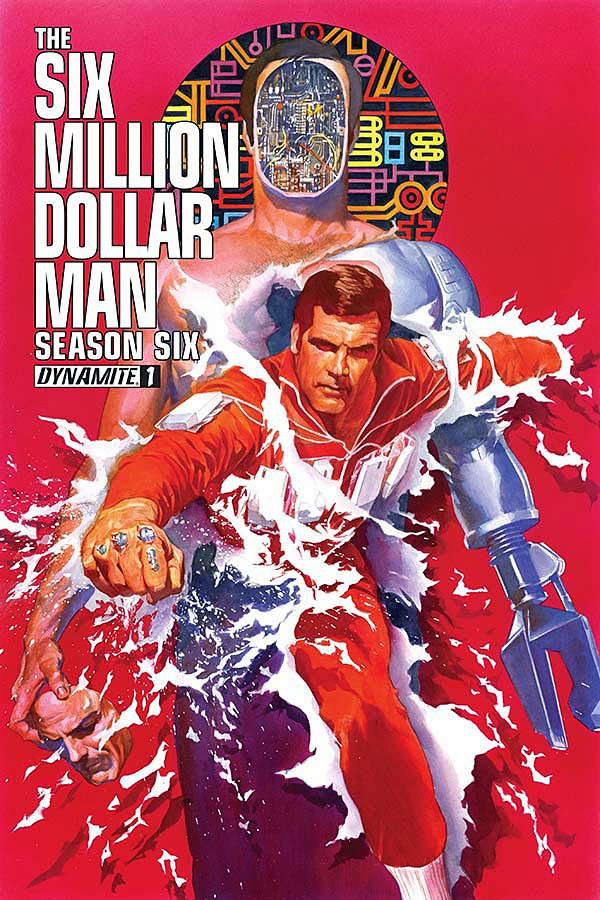 Dynamite picks up where the TV series ended, and starts Season 6...with the Six Million Dollar Man Season 6 comic!  Issue #1 is written by Jim Kuhoic and art by Juan Antonio Ramirez, with covers by Alex Ross and Ken Haeser!

This story also introduces the Kenner toy-line character of Maskatron to the TV version of Col. Steve Austin...as well as an alien menace! 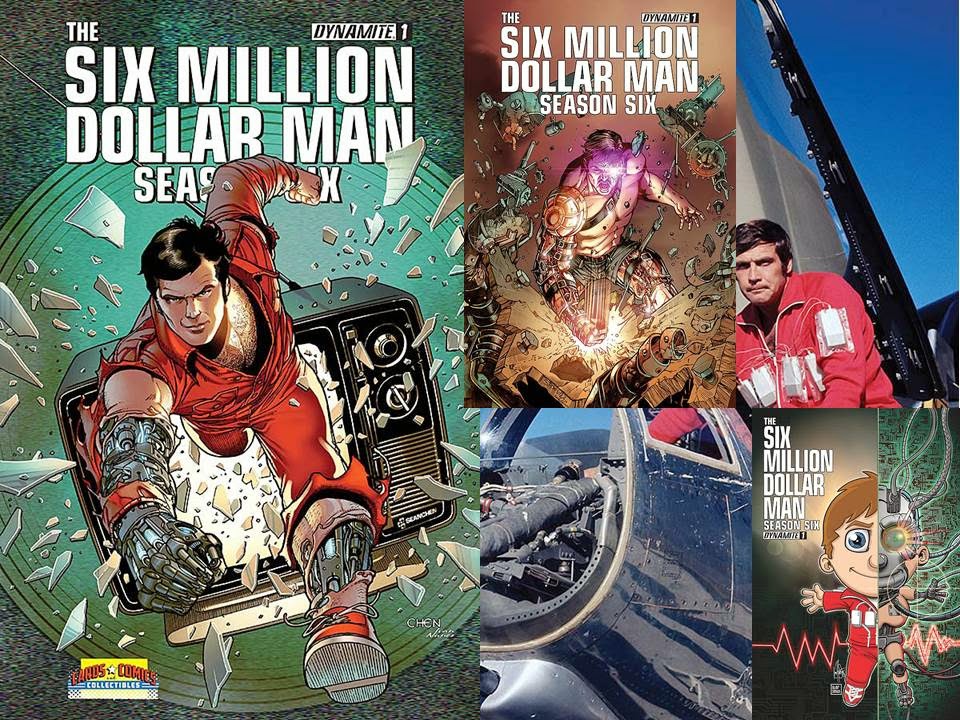 Just in time for the 40th anniversary of the Six Million Dollar Man, Steve Austin is back...Better, Stronger, Faster!