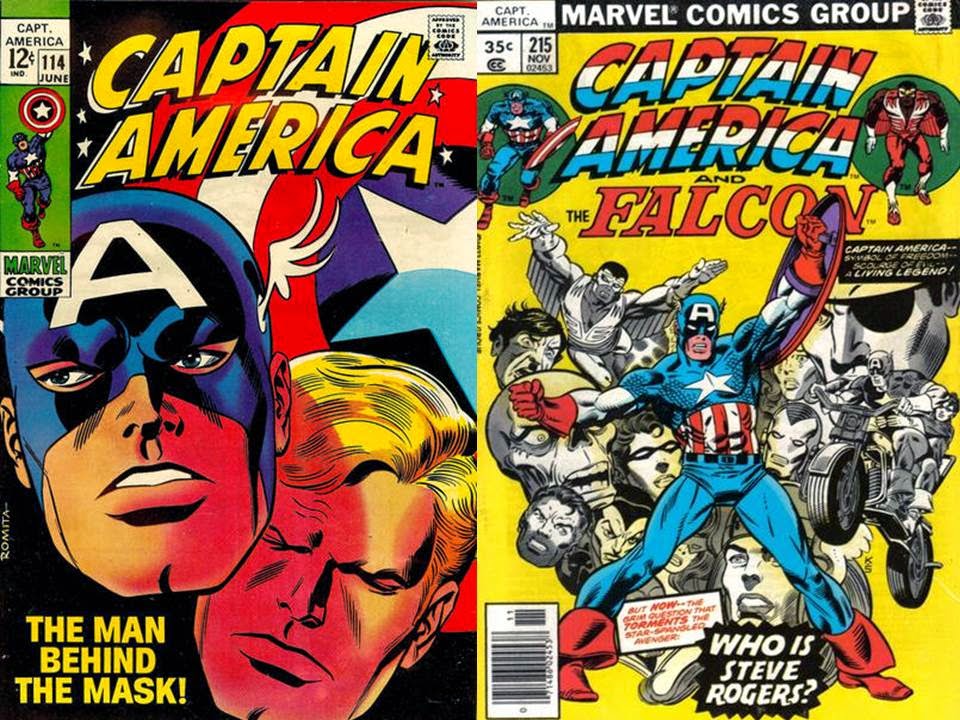 With any luck, you've gone and seen Captain America: Winter Soldier at your local movie house.

But, now that you have, you might be wondering...hey, what comics should I read dealing with Captain America that would help me appreciate that movie and find out about the man behind the mask.

Well, here's a few collections for you to check out to help you appreciate the movie! 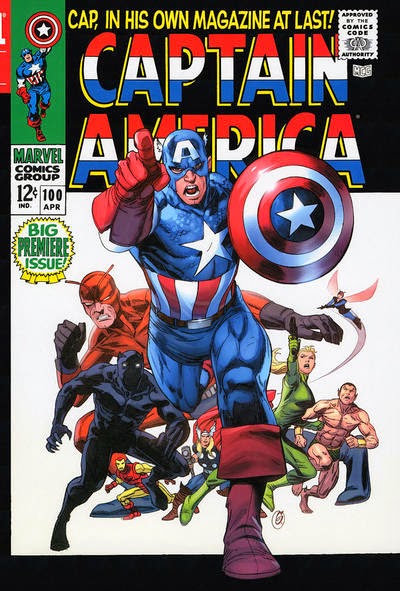 Captain America returned from World War II into modern times with Avengers #4 (March, 1964), but his solo tales in the present started with Tales of Suspense #59 (November, 1964, by Stan Lee and Jack Kirby...and Captain America was also in the previous issue, but that was in a battle with Iron Man in Iron Man's feature).

These stories are all written by Stan Lee, with art in most issues by Jack Kirby (Captain America #110-113 were drawn by Jim Steranko). 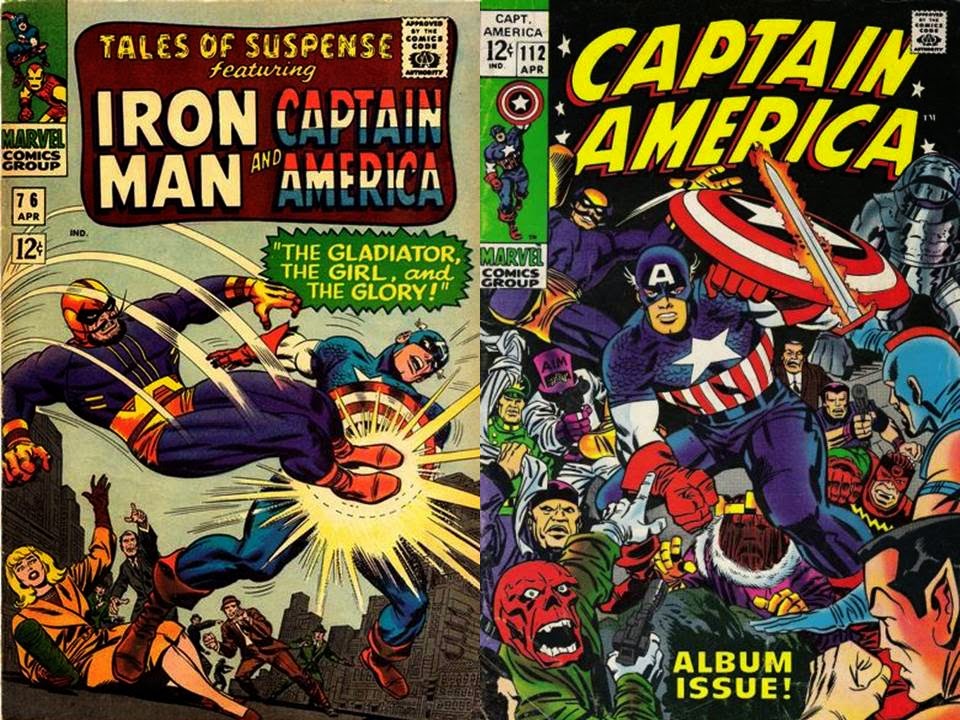 These tales include basic retellings of Cap's origin (as well as the origin of the Red Skull), as well as the first appearances of Batroc (Cap's savate fighting foe), Agent 13 (Sharon Carter), the Sleepers (robotic agents of the Red Skull working in the here and now), some flashback tales to World War II with Cap's partner, Bucky and the evil Baron Zemo (who created the rocket that sent Cap into the ice and Bucky plunging to his apparent death), working in the here and now with Nick Fury and the agents of S.H.I.E.L.D., and even facing Madame Hydra (who would later be known as the Viper) and her Hydra agents (and quite a bit more not mentioned here!)...this takes us almost to the introduction of Captain America's friend...the Falcon! 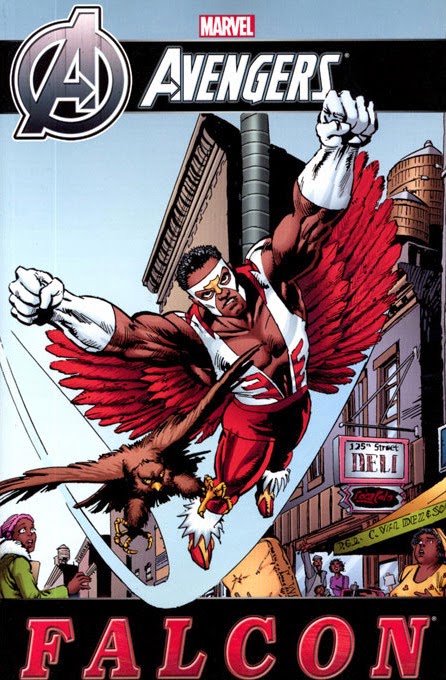 Sam Wilson first met Steve Rogers while he was in exile, and fighting the Red Skull, but Steve and Sam became fast friends (starting with the tale in Captain America #117, September, 1969 by Stan Lee and Gene Colan). 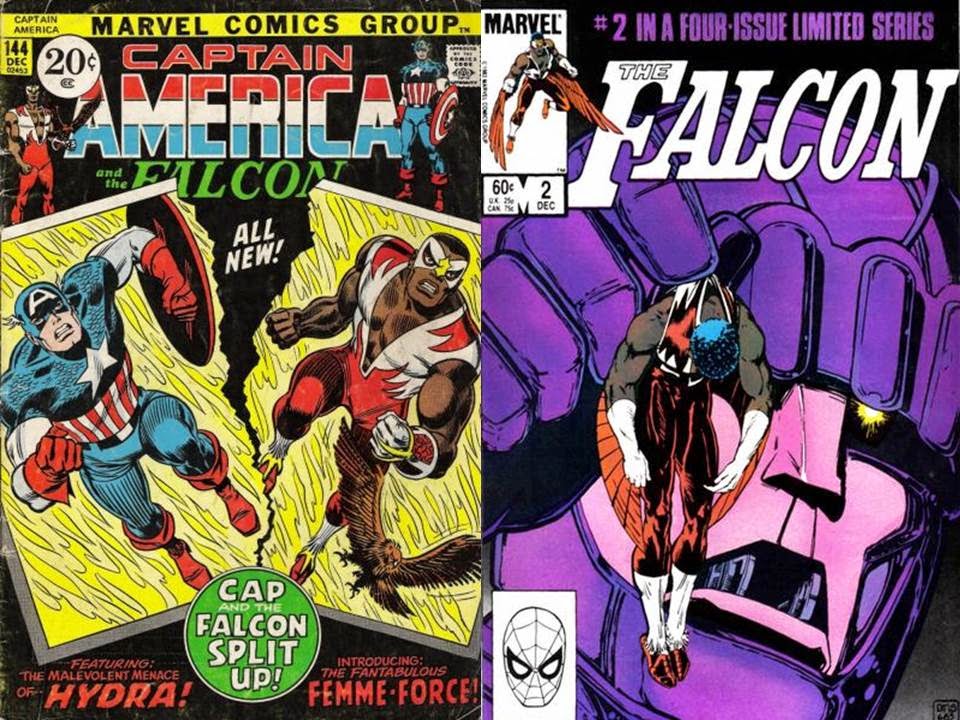 Falcon even had a few solo adventures, and if you want to read those (his first solo, from Marvel Premiere #49 (August, 1979 by Mark Evanier and Sal Buscema) as well as his first mini-series, Falcon #1-4 (1983-1984), where Sam faces a Sentinel from X-Men and Electro, who is Spider-Man's foe...being a one man Marvel melting pot...tying together plots from Amazing Spider-Man 2 and X-Men: Days of Future Past...well, if those franchises were part of the connected Marvel movie universe....)....then you would want the Avengers: Falcon book (which also tells a little of Cap's history with Falcon, and stories from Captain America #117-119, #220 and #276-278). 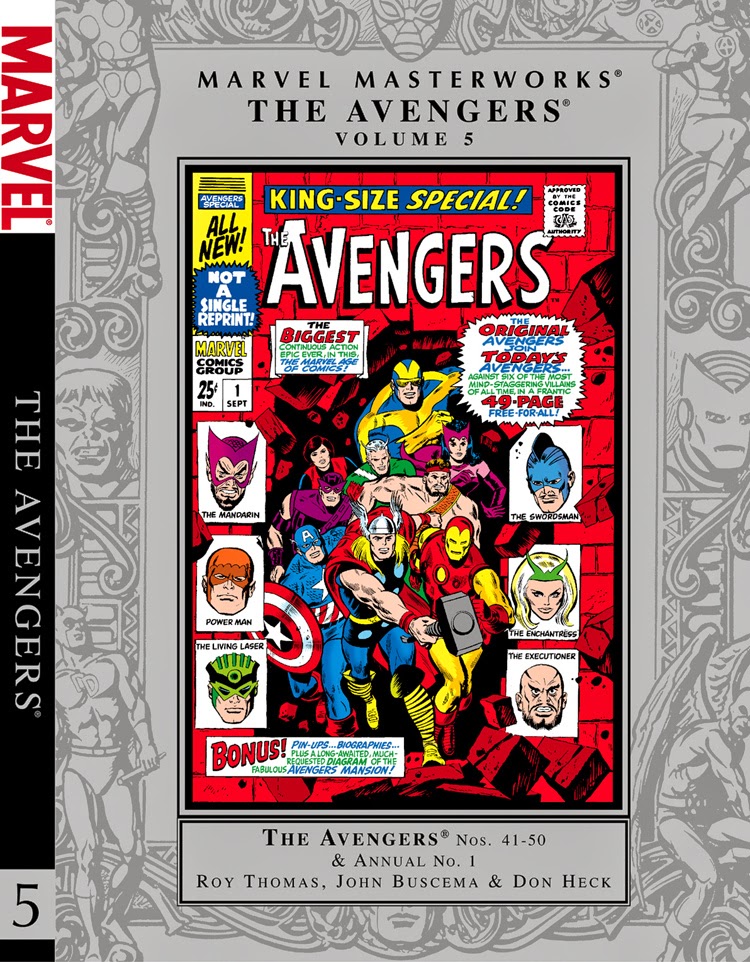 Natasha Romanova started her career as a spy for the KGB, and faced Iron Man (starting with Tales of Suspense #52, April, 1964 by Stan Lee and Don Heck) and even recruited new hero Hawkeye to help her against the armored one...

Hey, what does this have to do with Captain America?

Well, from Avengers #43-44 (August-September 1967, by Roy Thomas and John Buscema), Black Widow (along with Captain America, Hawkeye and a few other Avengers like Goliath, Wasp, Quicksilver and Scarlet Witch) have to deal with that past and the Red Guardian (a Russian version of Captain America).

You can find these tales in Marvel Masterworks: Avengers Volume #5...where Hercules joins the Avengers (and you find a little history of Quicksilver and the Scarlet Witch, which will help you get ready for the next Avengers movie, Avengers: the Age of Ultron as well as many Avengers villains you haven't seen on screen yet!). 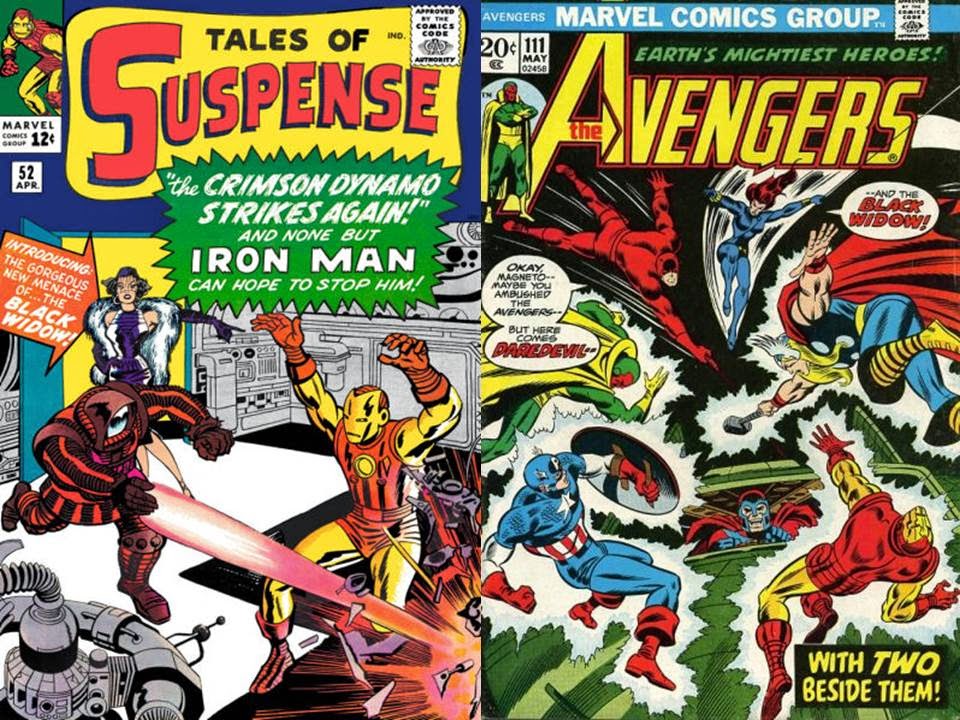 Black Widow didn't spend much time in Captain America titles in the 1960 or 1970s, instead pairing with Daredevil after a short run of 8 issues in Amazing Adventures didn't work out...(and sporting her more familiar jumpsuit gotten in Amazing Spider-Man #86, July, 1970 , and she finally joined the Avengers at this time with Avengers #111, May, 1973, while battling Magneto!).  Find her first appearance, the Amazing Spider-Man issue, all 8 of her Amazing Adventures issues and Daredevil #81 in Black Widow: The Sting of the Widow as well (but Cap is not to be seen there...)

Captain America At His Best 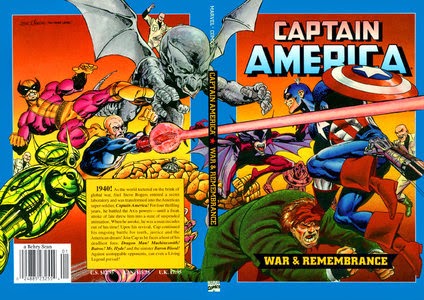 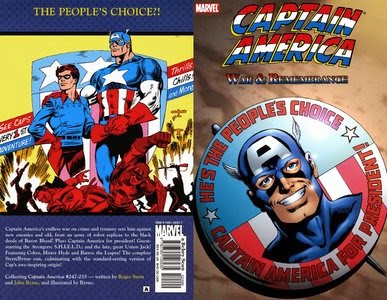 having Captain America in an adventure with Dum Dum Dugan (an agent of S.H.I.E.L.D., as well as a former Howling Commando) against the Machinesmith (and old Daredevil foe, as well as Magneto and Baron Strucker?), a fight with Batroc (and another old Cap, Daredevil and Thor foe...Mr. Hyde), a little work in England against Nazi vampire Baron Blood and helping Union Jack (a friend of Cap's from his days in the Invaders....a group of World War II heroes, that included the Sub-Mariner, Bucky and the original android Human Torch), as well as one of the more comprehensive retellings of Cap's origin (and even a possible run for president for Steve Rogers?).

About the only thing missing was the Red Skull (but his presence was felt...oh, and one more thing was missing....). 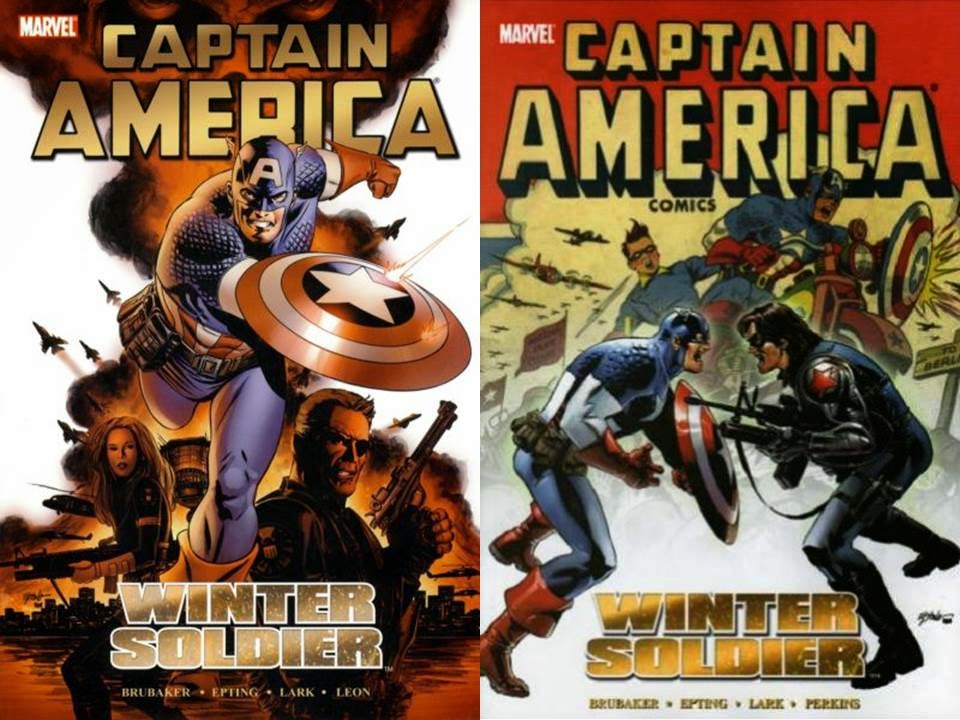 All these issues...and still nothing about the Winter Soldier?

Well, they do tell that tale...kind of.  But, you need to read the two volumes of Captain America: Winter Soldier, collecting Captain America #1-14 from January, 2005 to April, 2006) by writer Ed Brubaker and artists Steve Epting and (Michael Lark and Alex Schomburg for flashbacks).  These stories tie a good deal of what has gone before together...while also introducing the Winter Soldier (and who he is rocks the very Marvel Universe to its very core, taking an event that people thought was...and making it into something more!). 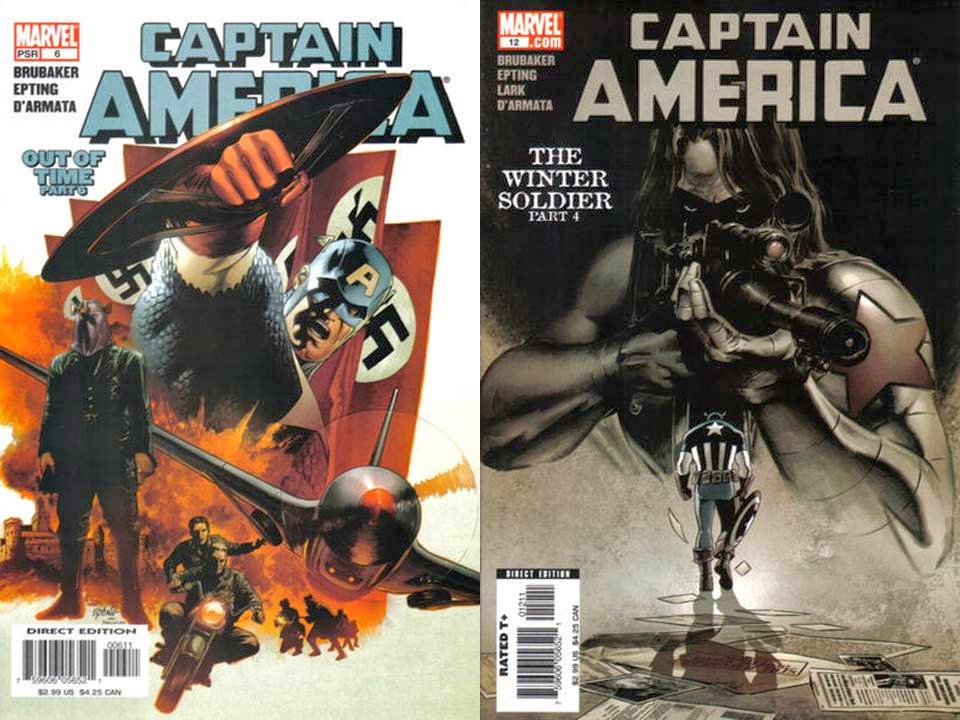 Reading all those previous stories give you a better understanding of current events (and why who the Winter Soldier was was such a shock to poor Steve Rogers....as, in the comics, it had been quite some time before he had to deal with that issue!). 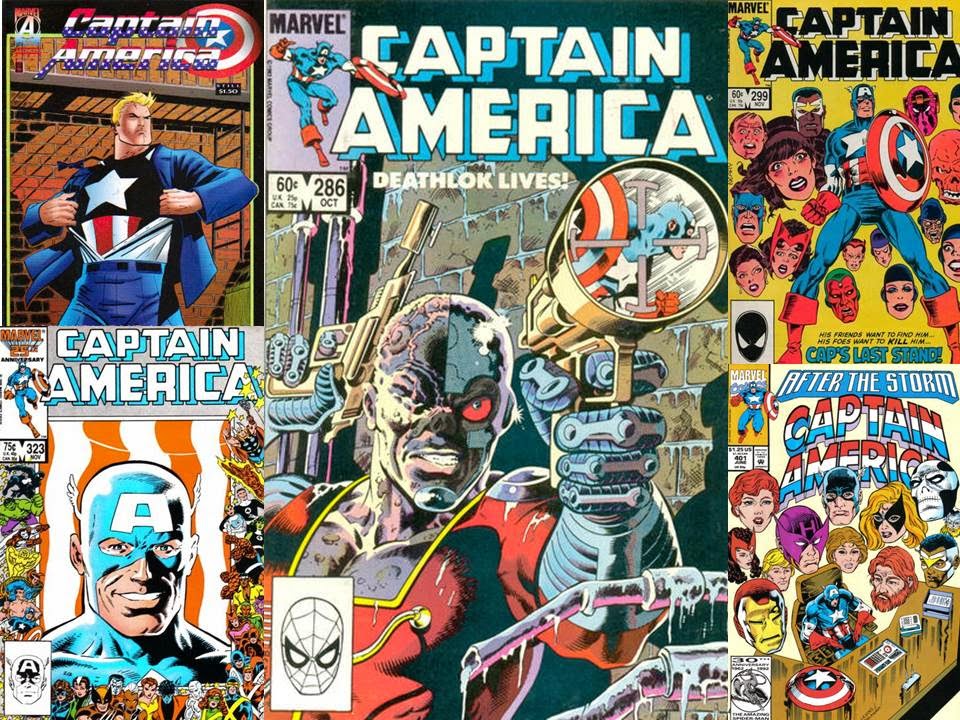 Still, there are many more tales around (times when Steve wasn't Captain America...

...being instead the Nomad or the Captain), his fight against Deathlok, his battles against Hydra, the Secret Empire, the Serpent Society, adventures with S.H.I.E.L.D. and Nick Fury, dealing with the legacy of others who took over as Captain America, and oh so many fights with the Red Skull...but, hopefully, after reading these tales you'll want to search the others out...as they are all connected and winter is here and Captain America soldiers on!

Posted by Dave's Not Here Comic Blog at 7:02 AM