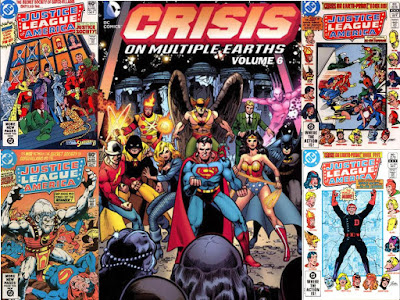 A last look at the collection of JLA/JSA team ups, and it is a big one!

True, it is only two team-ups of the teams, but each of them carry over more than two issues, and involve more than just the Justice League of America and Justice Society of America.

Here's a look at the special meetings.... 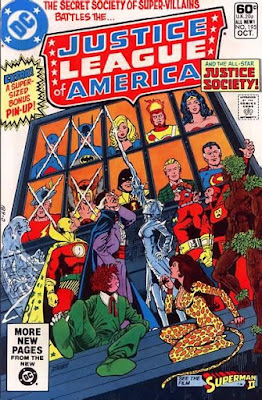 Justice League of America #195 (October, 1981) by Gerry Conway, George Perez and John Beatty starts with Brainwave recruiting villains (Killer Frost, Signalman, Cheetah and Floronic Man) from Earth-1, and Monocle, Psycho-Pirate, Rag Doll and the Mist gotten by the leader of this new Secret Society of Super-Villains....the Ultra-Humanite (one of the Golden Age Superman's very first villains).

After Brainwave brings the four to his home Earth and the Ultra-Humanite's headquarters, that villain explains his plan....that, if 10 heroes from the JLA and JSA can be sent to limbo, either Earth-1 or Earth-2 will lose all its heroes as the cosmic balance readjusts itself! 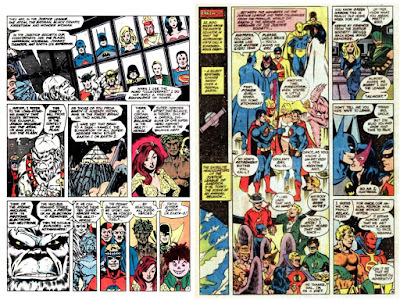 Meanwhile, at the JLA Satellite on Earth-1, the JLA (missing only Martian Manhunter for a complete membership) and JSA have an uneventful party, even with Green Arrow there (he had quit recently, but came to see friends...and Black Canary).  Black Canary was the last on the satellite, when a sudden hum....brought her foe, the Mist, who defeats her.  Monocle defeats the Earth-2 Hawkman at home, and Cheetah defeats the Earth-1 Wonder Woman, and the villains all report back to Ultra-Humanite of their success (as the body-switching villains dwells on his real plan....that he knows which heroes will be eliminated...those of Earth-2!). 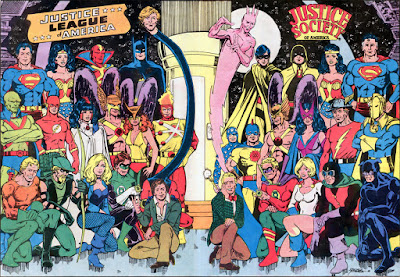 Lots of JSAers only in this issue, most from the last JLA/JSA team-up, but Superman and Robin came from World's Finest Comics #271, Hourman and Atom came from their solo features in the Whatever Happened To...? back-ups in DC Comics Presents, and Power Girl and Huntress came from Huntress' back-up in Wonder Woman.  Sandman, Spectre, Dr. Mid-Nite, Starman, Wonder Woman of E-2, Wildcat and Star-Spangled Kid did not attend. 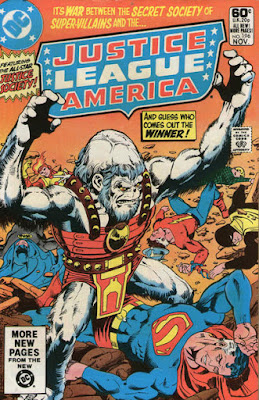 The Ultra-Humanite imprisons the first three heroes and summarizes his plan to start Justice League of America #196 (November, 1981) by Gerry Conway, George Perez and Romeo Tanghal.

Then, the plans continue, with Psycho-Pirate taking Hourman on E-2, Signalman taking Batman on E-1, Rag Doll getting the Flash on Earth-2, Floronic Man besting Atom on Earth-1, Brainwave besting Johnny Thunder and his Thunderbolt on E-2, Killer Frost capturing Firestorm on E-1, and the original Superman confronting his now simian bodied Ultra-Humanite, and losing on E-2.

The villains place the 10 heroes in Ultra-Humanite's special cells, and transport it to limbo...... 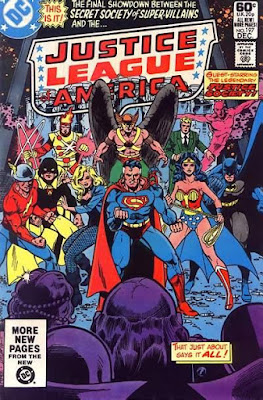 With Justice League of America #197 (December, 1981)  by Gerry Conway, George Perez, Keith Pollard and Romeo Tanghal (and cover by George Perez and Mike DeCarlo), the heroes end up in limbo....and the Earth-2 villains rejoice as their reality warps, losing their heroes....and the Earth-1 villains realize they were set up (that the Ultra-Humanite knew what would happen).  Ultra-Humanite sends them back to Earth-1, so his villains can now plunder their heroless world.

Killer Frost, Signalman, Cheetah and Floronic Man find Green Lantern on Earth-1, defeat him, and take the transporter tube to the JLA Satellite, defeating Elongated Man there....and then use the JLA's Transmatter Machine to go to limbo to free all 10 heroes....who then go to Earth-2, and toss the Earth-2 villains all into limbo as well (and, when they return to reality, Earth-2 gets its heroes back). 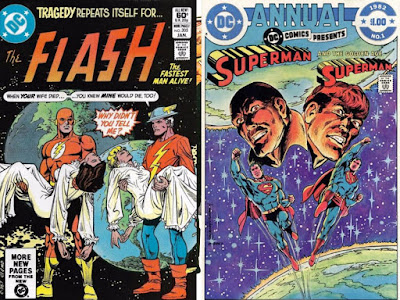 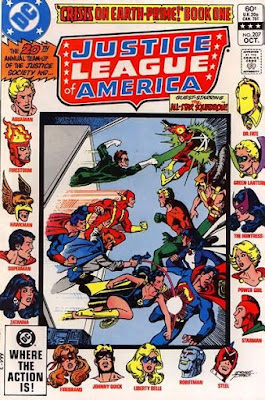 The JSA (Dr. Fate, Green Lantern, Starman, Power Girl and Huntress) is coming to the JLA Satellite in Justice League of America #207 (October, 1982) by Gerry Conway, Roy Thomas, Don Heck and Romeo Tanghal (with cover by George Perez), except they don't quite make it, with Superman, Aquaman, Hawkman, Zatanna and Firestorm meeting the Crime Syndicate of America!

The JSA found themselves in the limbo prison that the CSA was in, while Power Ring, Johnny Quick, Ultraman, Owlman and Superwoman fight the JLA, and leave the JLA Satellite.  The JSA break free from their extradimensional prison, but end up on an Earth-Prime destroyed by nuclear war!  The JLA use their Transmatter Machine to go to Earth-2, to find the JSA HQ unused since January of 1942....and Earth-2 now ruled by Per Degaton.  So, they go back in time to the JSA's HQ in January of 1942....and meet...the All-Star Squadron?

Head down to the All-Star Squadron issue for a little back story.....

The 'Mystery Men' Of October 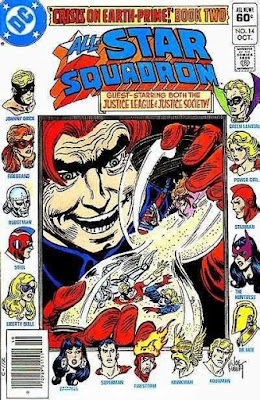 All-Star Squadron #14 (October, 1982) by Roy Thomas, Gerry Conway, Adrian Gonzales and Jerry Ordway (cover by Joe Kubert), starts with Per Degaton ordering the members of the World War II hero group, the All-Star Squadron to kill each other....but, this was just another dream of Per Degaton's....which was enough to revive his memories of his previous time travels, and start trouble again.

This time, he ends up in limbo and finds the Crime Syndicate of America (from Earth-3), frees them, has them take Cuban nuclear missiles from Earth-Prime's 1962 Cuba (during the Cuban crisis), then sends them to replace the JSA during their transmission from Earth-2 in 1982.

The Bomb-Blast Heard 'Round The World 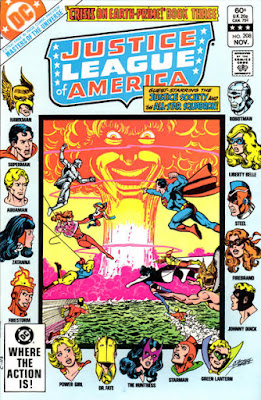 The JLA and All-Star Squadron have a quick fight to start Justice League of America #208 (November, 1982) by Gerry Conway, Roy Thomas, Don Heck and Sal Trapani (cover by George Perez).  The teams realize the are both heroes, the JLA catches the All-Stars up, and both teams head to meet FDR at the White House....where Per Degaton had delivered a VCR and TV....where he recorded his plan, that he wants total world control or he will use his atomic bombs (taken from 1962 Cuba) to destroy the world (Hitler and Churchill also got a tape and TV).  Meanwhile, on Earth-Prime, the JSA fight mutated men, and find out that Kennedy and Khrushchev had World War III, because of the implausible story super humans had taken Cuba's hidden nuclear missiles (Earth-Prime had no super heroes in the 1960s).  The JLA and All-Stars watch Degaton launch one missile as proof (with the JSAers showing up right before the blast)...and Degaton feels that at least the Allies will surrender to him to save the world!

Master Of Worlds And Time 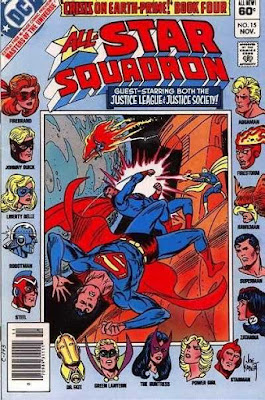 The JSAers explain they followed Per Degaton's trail back to January, 1942 in All-Star Squadron #15 (November, 1982) by Roy Thomas, Gerry Conway, Adrian Gonzales and Jerry Ordway (with Joe Kubert cover).  The heroes head to the White House, and Per Degaton again broadcasts, telling President Roosevelt and the world's leaders, of his orbital stations that will launch the nuclear missiles.  The heroes split into teams, with Superman, Dr. Fate and Robotman facing Ultraman at a satellite, finding three missile sites of Degaton; Aquaman, Starman and Liberty Belle facing Superwoman on a Pacific Island launch pad; Hawkman, Huntress and the All-Stars Johnny Quick face Power Ring in the Midwestern United States...then Degaton boasting the heroes will not find the last site as we head into..... 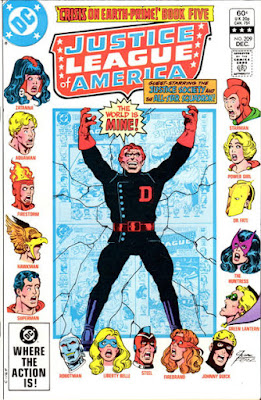 The last of the team-up, with Justice League of America #209 (December, 1982) by Gerry Conway, Roy Thomas and Don Heck (with cover by George Perez), with the first three teams returning to brief FDR.  Then, Firestorm, Power Girl and Commander Steel are arriving in Geneva, Switzerland, to fight the CSA's Johnny Quick, stopping his missile.  The heroes, successful, go to find Per Degaton and stop him (hidden under the future site of the Pentagon), while Zatanna, Green Lantern and Firebrand travel to Earth-Prime in 1962, stopping the Crime Syndicate from even taking the Cuban missiles, and resetting time....resulting in everyone going back to where this all started, and the 5 JSAers coming over from Earth-2 to meet most of the JLA in their satellite, with Per Degaton going back to washing test tubes in Prof. Zee's time lab again (as he did every time that time reset....).

The JSA would show up next in the first issue of Infinity, Inc.....as Huntress continued her back-ups in Wonder Woman. 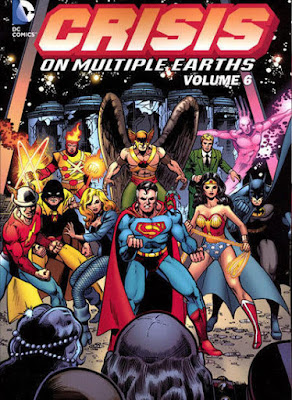 Big team-ups here for the last of the volumes that DC put out of the Crisis On Multiple Earths (Volume 6), with changes in the world started on one Earth, and major history changes involving heroes and villains from four worlds show how much bigger the Crisis would become, all from the time the first Flashes met, to the first JLA/JSA team-up, and even Legion's future and the past...and so much more.

Still, there are a few JLA/JSA stories that didn't get collected, and more than a few solo meetings of multiple Flashes, multiple Green Lanterns, multiple Supermen and more....and check back as the tale of the last JLA/JSA team ups will be told!