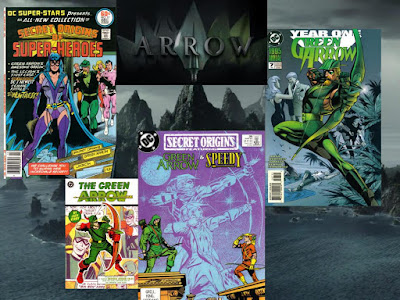 With Arrow ending this week, figured it would be a good time to look back at the origins of the Emerald Archer....

....and over the decades, Green Arrow has had his beginnings told over and over again!

Let's take a look over a few of them, after being thankful that Green Arrow began in More Fun Comics #73 (November, 1941) by Mort Weisinger and George Papp fully formed....

The Birth Of The Battling Bowman 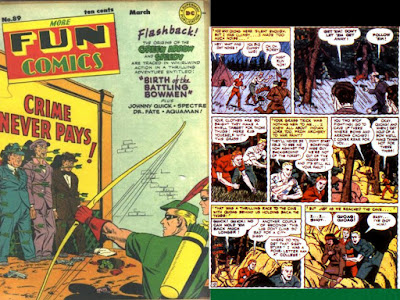 The first telling of Green Arrow's origin happened in More Fun Comics #89 (March, 1943) by artists Cliff Young and Steve Brodie, with millionaire Oliver Queen finding Roy Harper on a lost mesa, and the two using their archery skills to stop crooks from plundering the treasures that were found there.

This adventure ended up being the origin of the Golden Age Green Arrow (and Speedy), who were members of the Seven Soldiers of Victory. 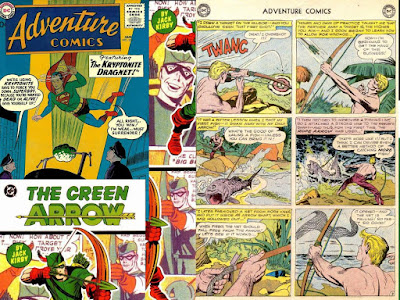 For a telling of Green Arrow's origin, look for Adventure Comics #256 (January, 1959) by France Herron, Jack Kirby and Roz Kirby, wherein millionaire Oliver Queen fell overboard on a ship, ending up on a desert island, and using the local resources to make arrows, hunted for food, then stopped some pirates, and took on his heroic identity of Green Arrow (Speedy getting involved with his own origin told later).  The duo returned to the island as criminals had come across it, and might have found Ollie's diary of his time there and figured out he was Green Arrow.

This introduced the island to the origin of Green Arrow, but that wasn't the end of additions to Green Arrow's origin (but these two origins were reprinted in both the Secret Origins Of The Super DC Heroes of 1976 and in Green Arrow: A Celebration of 75 Years of 2016).

The Origin Of Green Arrow 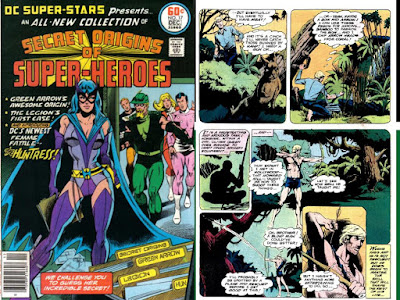 Green Arrow got his origin revisited in DC Super Stars #17 (November-December, 1977) by Denny O'Neil, Mike Grell and Bruce D. Patterson.  While Oliver had been tracking down a man with proof that his fortune had been stolen, he also remembered his beginnings, very similar to the last telling, but Oliver had grown a beard on the island (and really didn't fashion clothes there as well).  Still stopping pirates (who also had thrown him overboard to begin with), he went on to become Green Arrow, joining the JLA, and losing his fortune.  It also added that he had learned archery from Howard Hill in Hollywood.

This origin is about to be reprinted in a facsimile edition of this issue, with origins of the Huntress and Legion of Super-Heroes as well! 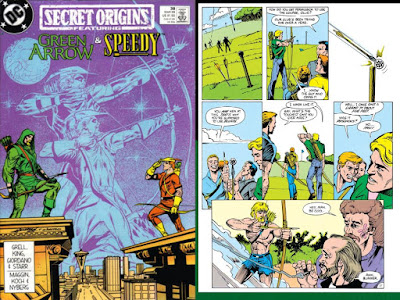 DC had a Crisis, and its heroes were all living on one Earth, so Ollie got an enhanced origin in Secret Origins #38 (March, 1989) by Mike Grell (who revived Green Arrow as more of an urban hunter with his Longbow Hunters mini-series and Green Arrow regular title) and for the origin, artists Hannibal King, Dick Giordano and Arne Starr.  It was a drunk Oliver Queen who fell off his own yacht who ended up on the island, but this Oliver Queen had fancied himself Robin Hood as a child, with movie stunt archer Howard Hill as a friend, and the "pirates" he stopped on the island were simple weed farmers. 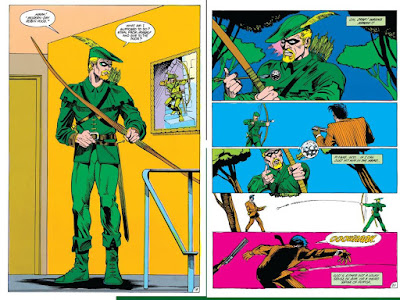 Going to a costume party soon after his return, Oliver was mulling over the idea of Robin Hood when his party was crashed by criminals, who he stopped in costume (even using an unintentional trick arrow....an arrow with a golf ball on the end) to stop them.  The main thief, Lester Norton, as being taken away, was upset about being stopped by that "green arrow guy", and the Star City papers stuck that name on Ollie's heroic identity.

Speedy's adjusted origin filled the second half of this book, and this tale has yet to be reprinted.  This Green Arrow origin showed Oliver as not much of a businessman, but more of a romantic, wanting to be a hero. 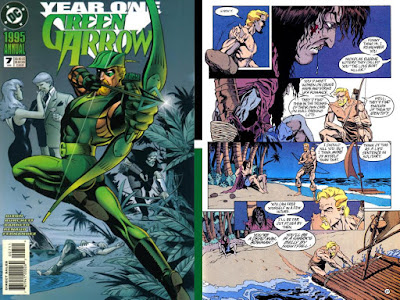 This origin started similarly to the DC Super Stars one, with Green Arrow having a showdown with someone in the rain.  Green Arrow Annual #7 (1995) by Chuck Dixon, Rick Burchett, Chris Renaud, Eduardo Barreto and Gerry Fernandez introduced a pathetic playboy Oliver Queen, who had inherited his money from his parents, who fought with the crew of his yacht, and got no help when he fell overboard. to end up on an island. 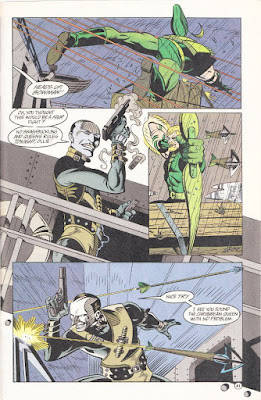 Recalling his childhood when his dad gave him a bow and arrow for Christmas (which young Ollie went outside with and accidentally killed a bunny), Ollie fashioned a bow and arrow to hunt for food, and came upon a wrecked ship on the island, and a survivor of that ship.  The pair fashioned a small raft on the island, but Ollie left his helper behind when he found out he was Nicholas Kotero (noted serial killer of women).

Ollie ended up on another island, and found some weed farmers, and ended up back home, taking on the Green Arrow identity (and mismanaging his inherited fortune while playing hero).  It was Kotero he was confronting in the rain, as the killer also escaped the island, looking for revenge.

This origin showed Oliver being on more than one island, and that more could have happened to him in isolation.  This tale has yet to be reprinted. 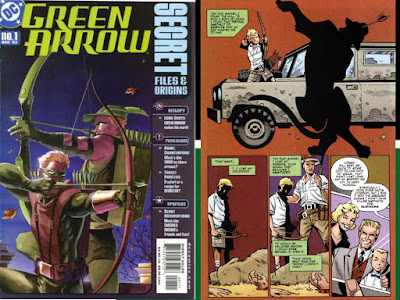 While there were many stories in Green Arrow Secret Files & Origins #1 (December, 2002), the one by Scott McCullar, Rick Burchett and Dan Davis, where Oliver told his son, Connor, of his parents, Robert and Moira Queen.  Robert founded Queen Enterprises, had the Star City Bay Bridge build, owned the Star City Rockets (a baseball team who played at Papp Stadium).  All this, and that the Queens were descended from Sir Robert Queen the Earle of Dornee....which is what gave Robert the idea to give his son a bow and arrow one Christmas. 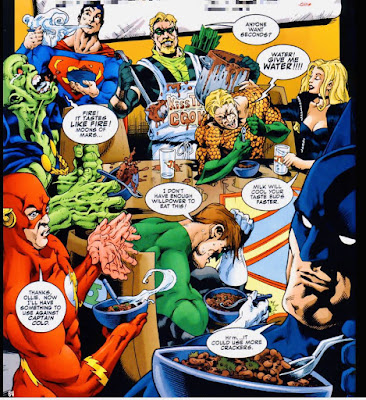 Still, Ollie had no use for it after killing a rabbit, but, after a trip to Africa with his parents, guided by stunt archer Howard Hill and big game trapper Congo Bill, Robert explained to his son that he gave him the bow and arrow to help toughen the lad up...and he need to, as the party was set on by lions, killing Robert and Moira, and Ollie only survived because of his archery skills.  Congo Bill sent him home to live with an uncle, who sent Ollie to boarding school...then, Ollie was misspending his money on yachts after....until one day....

This issue also has other stories, and features on Green Arrow, Black Canary, Arsenal and more, as well as Green Arrow's trick arrows and even a chili recipe; but the issue has not been reprinted. 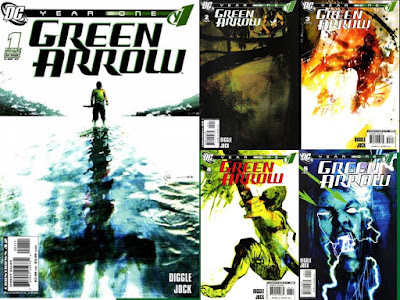 Green Arrow: Year One is a six issue mini-series from 2007 by Andy Diggle and Mark Simpson, this time fighting with drug dealers as part of crime syndicate (introducing readers to China White, a female assassin).  Oliver was marooned on an island thanks to his bodyguard, Hackett, came to enjoy the solitude after figuring how to make a bow and arrow to get food, and found "China White"... 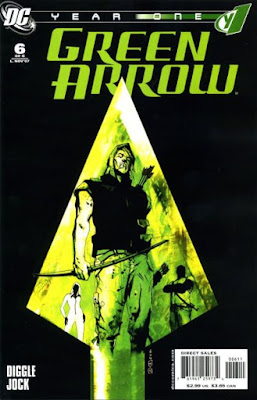 ...who had enslaved the island's population to produce her drugs, and was working with Hackett.  Ollie fought for the people (including Taiana, a native of the island who helped nurse Ollie back to health when he was injured fighting Hackett).

Ollie took down the operation with Howard Hill's bow (which the criminals had won in an auction), but didn't take credit for it when the authorities arrived, having a new appreciation for the people of the island.....and that he would take on a new identity, to become someone else, something else....the Green Arrow!

These six issues have been collected a few times since their original publication. 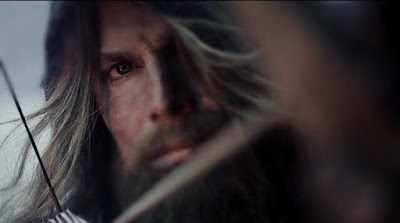 Hopefully, though a little repetitive, this should give you a little insight into the Green Arrow and how he came to be, how a spoiled rich boy became a man and a hero given the right time and circumstances....but that grew from one man, who could say that "my name is Oliver Queen....".
Posted by Dave's Not Here Comic Blog at 3:47 PM