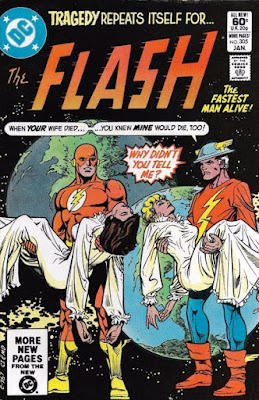 Seems a good enough time to pull out the last Flash crossover that Barry Allen and Jay Garrick would have before the Crisis on Infinite Earths....

....and it sure looks like it was going to spell doom for Jay's wife Joan! 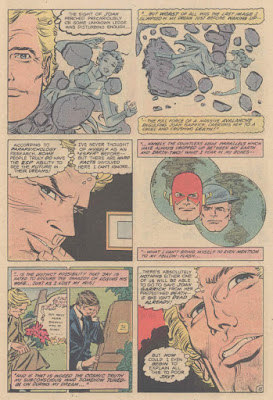 The tale started on Earth-2, where Joan Garrick was sleeping at home while her Flash, Jay Garrick was patrolling Keystone City....and she was taken by a mysterious force.  Meanwhile, on Earth-1, relatively recently widowed Barry Allen was dreaming about Joan (not like that...but a dream where she was running on a cliff....then falling to her death; leading Barry to feel worried Jay would lose his wife like he lost his).

This dream unnerved Barry enough to send him across the dimensional divide from Earth-1 to Earth-2, where, ending up at the Garrick's home, he found Jay....who was searching for his missing wife!  Having revealed his identity to the world, Jay felt he was the target of a terrorist group, the Ravagers, who were attacking Keystone City.  As Jay went into a drawer to show Barry proof, he triggered a device they had set...blowing up Jay's home!

The two speeders were to fast to fall for the unplanned explosion, with Jay saving the note of theirs, and Barry saving the fuse from the explosive, which he would use to track the villains.  But, who is the mysterious figure watching the pair? 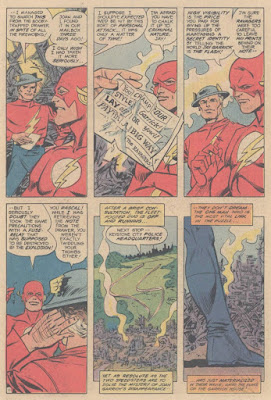 The two speedsters track the terrorists to their mountain hideout, but do not find Joan there.  Instead, the mysterious figure appears....it is Doctor Fate, a JSA teammate of Jay Flash (who worked with the duo before)....and he tells the duo that he was responsible for Joan disappearing.

Seems an extradimensional villain was able to access the magic orb in Dr. Fate's Salem tower, and send a bolt of mystic energy to draw Joan into his dimension....that evil being known as the Lord of Limbo (who was the menace faced by Barry at the end of his quest dealing with the death of Iris).

Barry barely escaped limbo before, and was unable to return to free the other inhabitants, but, working with Dr. Fate, the two speedsters worked their way back....found Joan, faced the Lord of Limbo, freed the inhabitants, and still got back home without freeing the Lord of Limbo from his prison! 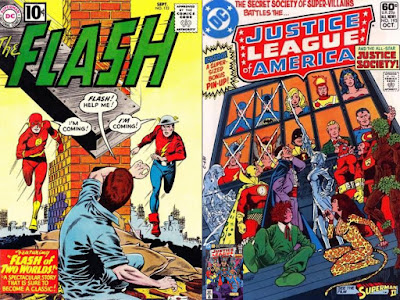 A special issue dedicated to Gardner Fox, who co-created the original Flash and Dr. Fate, as well as starting the two Flashes on their meetings from multiple Earths, as well as kicking off the Crisis with the earliest of the JLA/JSA meetings (including their first).

Jay Flash and Dr. Fate appeared here after the nineteenth JLA/JSA team-up (against the Secret Society of Super-Villains, coverage coming soon), with Jay appearing next with the JSA in an issue of Wonder Woman, and Dr. Fate starting a run as a back-up feature in the very next issue of the Flash!  An oddly prophetic issue as well, as Barry was worried Joan would die (but didn't), like Iris...who was dead (or was she?).

Posted by Dave's Not Here Comic Blog at 9:30 AM