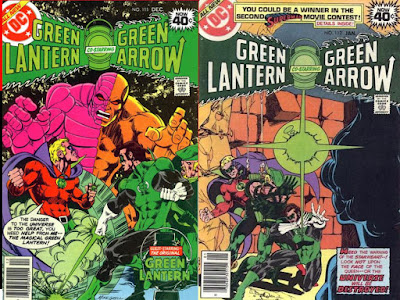 Even though Green Arrow did have his own alternate Earth doppleganger, the two Oliver Queens never met outside the pages of the Justice League of America. 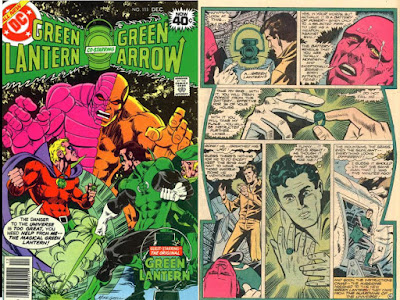 It all started in Green Lantern #111 (December, 1978) by Denny O'Neil, Alex Saviuk and Vince Colletta, with Green Arrow taking Green Lantern out for eats in Star City...and coming across muggers working on an old gypsy fortune teller.  Green Arrow took out his criminal, but as Green Lantern went for his, his ring froze, but the man turned into a green statue.  It was magic in response to Madame Eva's curse....but magic usually didn't flow this freely.  After prompting by Ollie to review his origin, Hal and Ollie headed to Oa, home of the Guardians of the Universe, to find out what might be happening. 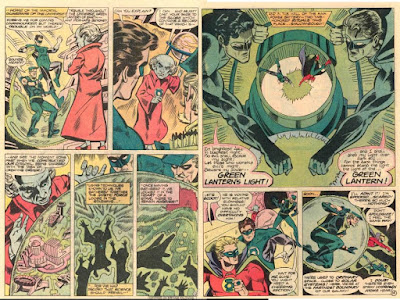 There, a Guardian explained how, when they were charged with keeping order to the universe, they gathered up all the magic, and contained it in the heart of a star  (The charging was self-imposed, as an Oan had let evil loose in multiverse, and the Guardians wanted to combat it).  Yet, there was a thief from outside the galaxy who stole the Star Heart....and loosed random magic again.  So, to combat this new threat, Hal decided to call on Alan Scott, the mystical Green Lantern from Earth-2.  After the pair charged their rings at the main Power Battery, the three heroes went after the villain in the empty space between galaxies.  Asking him to stop, the thief hurled power bolts taking out the two ring-slingers...at least until the next issue.... 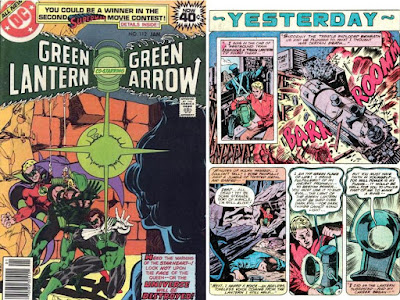 Dennis O'Neil, Alex Saviuk and Vince Colletta picked up the story in Green Lantern #112 (January, 1979), with the heroes in hot pursuit of the Star Heart thief.  The Green Lanterns compare notes on the blasts that took them out (magic for Hal, electricity for Alan), and Green Arrow asks Alan of his origin as the trio continue out of Hal's jurisdiction, with Ollie wondering where the meteor that formed the original Lantern came from, and what was the voice. 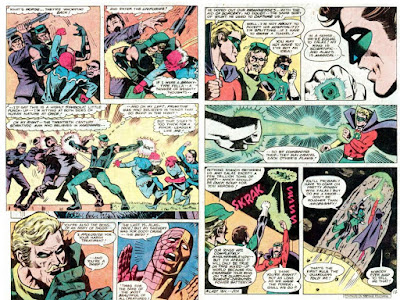 Finally, the trio came upon a split planet in the void, half city, half forest, with a building/castle on the dividing line.  As they approached, a pair of beams drained the ring slingers power, and took the Green Lanterns inside, as Green Arrow crashed to the ground.  There, he faced future soldiers and ancient trolls....until he was captured as well.  Inside the duo dwelling, Green Arrow met Jack-lord Zalaz, who had snatched the Starheart for his queen, M'la, who was dying and neither science nor magic would cure her. 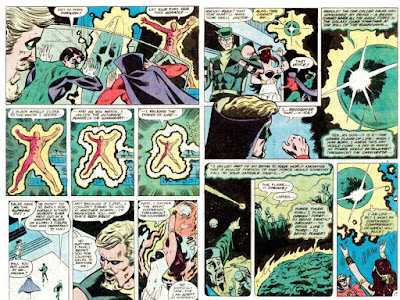 Sending Green Arrow to the prison he had for the Green Lanterns (a cell of yellow petrified wood), the two Green Lanterns combine their power (made possible by Alan charging at the Oan Power Battery), and, by using their power together, are able to confront Zalaz....who, at first was draining the Starheart to fight, then used it to transfer his life to M'la, reviving her (the most beautiful woman in the universe).  M'la, an adept sorceress, healed Green Arrow, then tasked herself to return the Starheart to its home, as Alan learned that the Starheart was the source of the meteor that eventually became his Green Lantern, and the heroes were returned home. 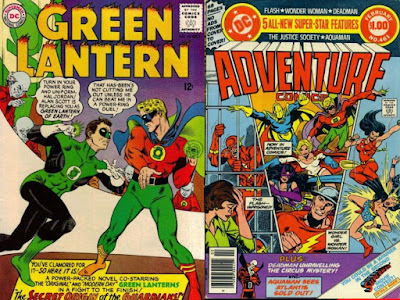 An issue that explained much, linking the two Green Lanterns as never before, as well as giving more history of the DC Universe, not unlike when the Green Lanterns first met solo, and learned of the origins of the Guardians of the Universe and the hand at the Dawn of Time! 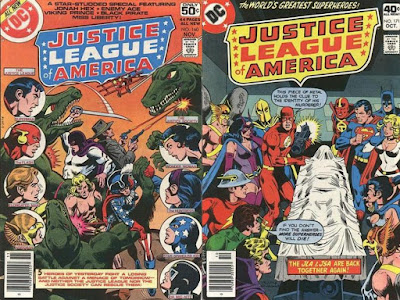 But, this was to be the last solo meeting of the Green Lanterns before the Crisis (with Alan appearing here after the end of the 1970s All-Star Comics series, and a few solo back ups in the back of the regular Green Lantern magazine before this issue, and a small spot in fighting histories heroes in a JLA/JSA team up, before more adventures in Adventure Comics, and losses of JSA teammates there and in the next JLA/JSA team up....with both those team ups chronicled here).  All awaiting a larger Crisis On Infinite Earths.....