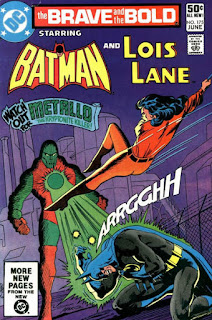 To be fair, Batman met Lois Lane quite a few times before this issue (starting with the first time Superman and Batman met), but always with Superman around (and usually, the World's Finest heroes were confusing poor Lois as to whether or not Superman was Clark Kent).
In this special issue of the Brave and the Bold (#175 from June, 1981, written by Paul Kupperberg with art and cover by Jim Aparo), Lois worked with Batman against Superman foe, Metallo, with NO Superman (or even Daily Planet reporter Clark Kent), in sight!

The Heart Of The Monster 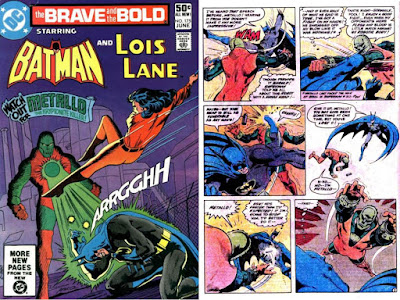 This tale starts in Gotham, at the local branch of S.T.A.R. Labs, where Batman confronts Metallo (a Superman foe, who was a cybernetic man powered by Kryptonite) on the roof.  Batman knew he was in for a fight, but, figured it was only against Metallo's robotic strength, and was quite surprised that Metallo's Kryptonite worked on him (as it usually is only felt immediately by Superman). 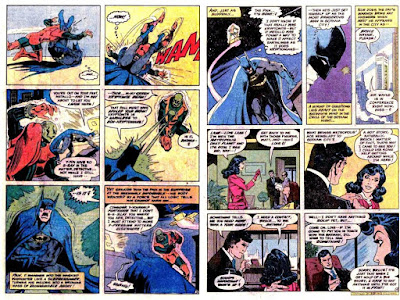 This is enough for Metallo to escape, and Batman to go back to thinking how to stop his visiting villain.  At the Wayne Foundation the next day, Daily Planet reporter (and Superman's girlfriend), Lois Lane arrives, looking for Bruce.  Lois wants Bruce to help her find Batman, as she was following a lead about S.K.U.L.L., a criminal organization that Metallo had appropriated, as their scientists had turned him from human to cybernetic monster, and that he was using the militant part of the group to find the last of them men who operated on him (to kill them). 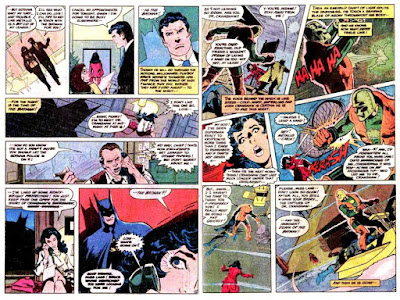 Bruce let her know Batman was already on the case, and had been exposed to Metallo's new Kryptonite....because Commissioner Gordon was an old friend.  As Batman, Bruce went to meet with Lois that night, who had scheduled a meet with Dr. Crenshaw.  Metallo shows up, and takes Batman and Crenshaw to his secret base (after a battle with Batman and Lois), but leaves Lois behind.  Lois goes to S.T.A.R. Labs to get a device to track Metallo, while Batman escapes the prison Metallo put him in, even without his utility belt.  Lois searches Gotham for Metallo.. 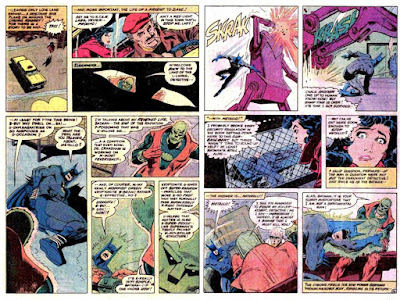 ...but finds he was in the S.T.A.R. Labs basement.  Metallo had Crenshaw work on his heart device, thinking he fixed it, then, when Batman and Lois confronted Metallo, the device went bad.  Crenshaw knew Metallo would kill him, so didn't quite fix his heart right (figuring the modified Kyrptonite would blow it out).  It did, and Crenshaw tried to leave, only to be stopped by Batman, with Lois only needing to file the story with Perry White. 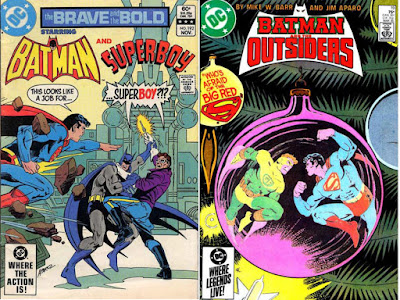 An all too rare time of Jim Aparo drawing members of the Superman family inside a book, and it is incredible, not unlike later tries, with Brave and the Bold #192 with Superboy, or Batman and the Outsiders #19 with Superman and the Daily Planet staff (or two B&B issues with Supergirl). 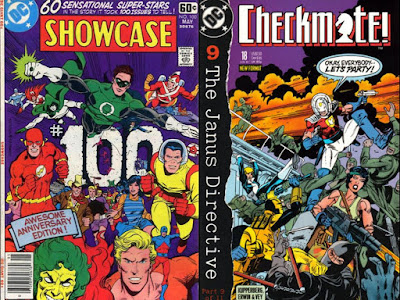 This issue is also a rare example of Lois in a comic without Superman (or even Clark Kent), with Showcase #100 and the Suicide Squad/Checkmate crossover, the Janus Directive, two of the few times that happened in the 20th Century, making her more than just Superman's girlfriend.
This issue of B&B even has a tale of Nemesis (who would be a member of the Suicide Squad for a time, but started as a Brave and the Bold back up series....).