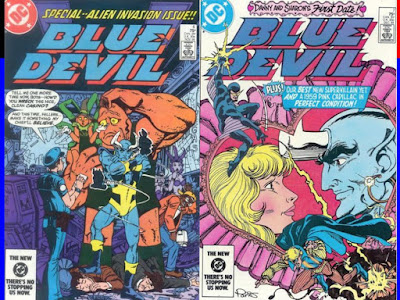 What's the first thing you have to go after you've gone away for a bit?

Well, you get to come back home.  But, in the case of stuntman supreme Dan Cassidy (the man trapped in the Blue Devil suit) and his cameraman, Norm Paxton, they weren't quite finished with their trip yet after their time down in Mexico.....as covered here.

Night On The Town 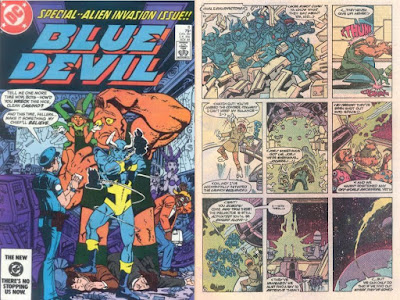 Blue Devil #6 (November, 1984) by Gary Cohn, Dan Mishkin, Paris Cullins, Ernie Colon and Gary Martin (credited in the next issue) takes us away from the action for a bit....way away, to another galaxy, where never do well Lehni and his large pal Jorj are trying to get away from the local law enforcement, stumbling into a mircobeaming experiment, and are sent far, far away... 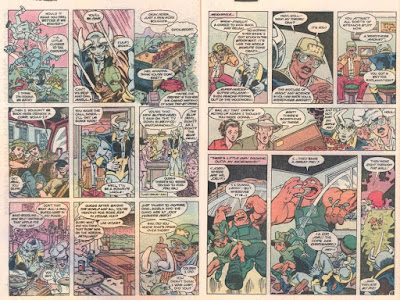 ....all as Blue Devil and Norm Paxton are hopping through the desert headed for home (with a stop at a diner, which luckily let's the duo know they are near Las Vegas).  Norm called Marla Bloom (Dan's producer) who gathers the gang to go get them in Vegas (earning the ire of studio head, Jock Verner).

As Norm tells Dan his theory of the "weirdness magnet" (Dan's marriage of science and sorcery in his mechanical suit married to the mystic via Nebiros), the microwave at the diner freaks out....and Jorj and Lehni appear! 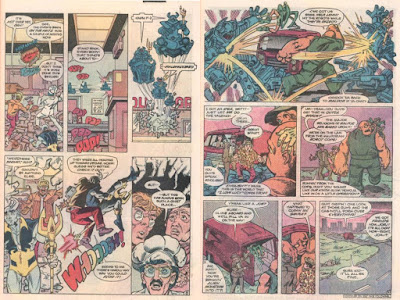 They take off, with the extraterrestrial law enforcement robots (and Blue Devil and Norm) following....towards Vegas.  Along the way, Jorg and Lehni find Bert and Smitty (remember them?).   Having ditched super villains like Metallo, they were planning a heist....in Vegas!....and now have two alien helpers.  Dan and Norm fight the robots and head to Vegas, to find Bert and Smitty, with Jorj and Lehni (who are afraid of Blue Devil because he looks like the peacekeeper robots). 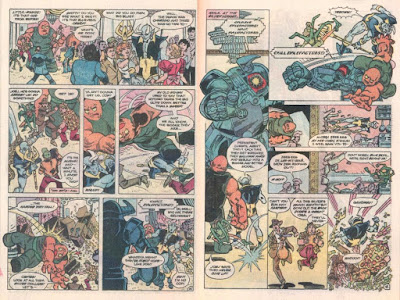 After total chaos in the casino, as the robots arrive as well, Dan sends the robots back through a microwave machine in the casino (as a temporary portal was opened on the other side), and Smitty and Bert get arrested (and are happy to, to get away from all the weirdness), but Jorj and Lehni are stuck here (no matter how much Dan tries to send them off).  Looking at the damage at the casino (also owned by Jock Verner), Blue Devil suggests they hire Jorj and Lehni to work off paying for it.

Meanwhile, special effects man, James Jesse (also known as the Trickster, who has faced Dan before) is in trouble and facing an assassin named Bolt (and is headed for a rendezvous with Dan and crew....

Just Another Day In L.A. 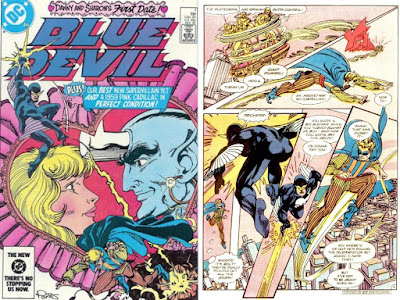 While Paris Cullins still does the art for the cover of Blue Devil #7 (December, 1984), the innards of the book are by the usual writing team of Gary Cohn and Dan Mishkin, but with special guest artist, Gil Kane. 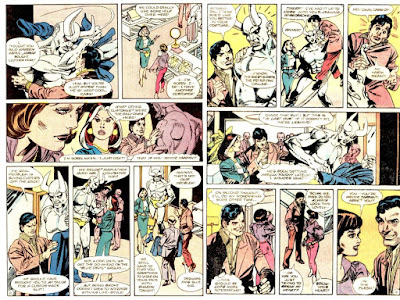 The issue begins with a battle between the Trickster and the forces coming for him, including average hoods, teched out hoods and Bolt.  James escapes them....and thinks of going to Blue Devil for help.  But, Blue Devil is in a pickle of his own...trying to find a suit big enough for his new body so he can go on his first date with Sharon!

Dan has trouble finding a large enough suit, but Marla and Wayne try to help (with counter girl Gina oddly interested in Wayne).

Back at Marla's home, her nephew Gopher is approached by three odd men who want to talk to Dan Cassidy, and they leave there card (IHNCS). 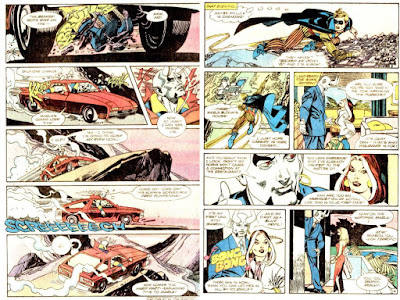 Eventually getting back to Marla's house after some trouble with Marla's car (as it is just too small for Dan), Dan is getting ready for Sharon to arrive (not knowing that Trickster is on his way to Marla's as well).  Sharon arrives, looking beautiful, and they leave in her large and well build old pink Cadillac, but, that is when Bolt teleports in above, as he has found the Trickster. 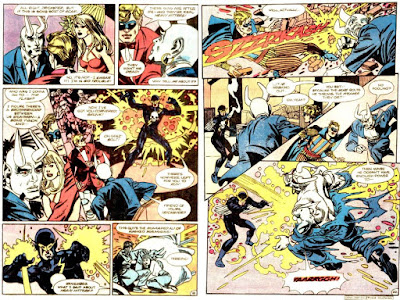 At the restaurant, Dan and Sharon are enjoying a nice first date, with the three men observing from outside, and Trickster having snuck in....and surprises Dan, just as he is surprised as Bolt teleports in!  A battle ensues, with Dan eventually facing off against Bolt, who demonstrates his electrical powers on Dan (much to the dismay of his suit), but fails to take out the Trickster, so Bolt teleports out, leaving Dan wanting to find out what is going on from the Trickster! 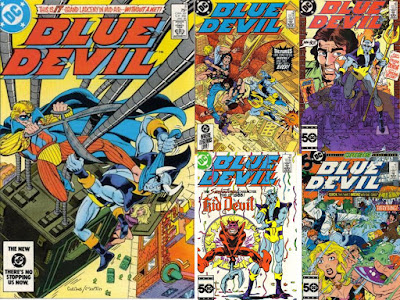 A good enough place to stop, but more on the Bolt saga and Trickster's troubles (and the rest of the crew) will be coming soon!