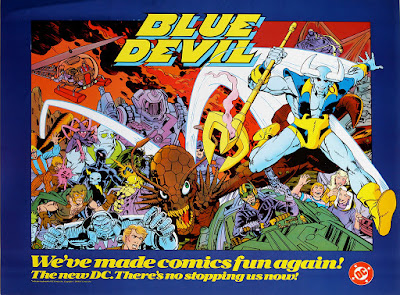 Dan Cassidy was a stuntman, working with a super suit of his creation...but, how did this working man in Hollywood turn himself into the Blue Devil?
Here is that story, with a few facts on his creation, as well as those who created the comic, as we take a look at that wonder of the 1980s in conjunction with the Super-Blog Team-Up, as a member of the Creator team (all will be explained as you read on....so dive on in!). 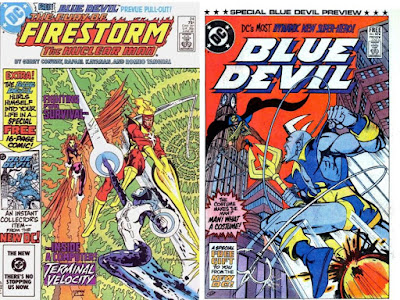 Beginning with the beginning...
...as Blue Devil premiered in a special preview insert within the pages of Fury Of Firestorm #24 (June, 1984) by Gary Cohn, Dan Mishkin, Paris Cullins and Pablo Marcos. 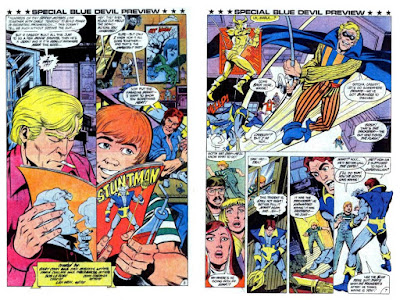 Here readers learn of the "super stunt suit" Dan Cassidy created, with special servo-motors that give him the strength of over 20 men, enhance his natural agility, make him nearly indestructible, along with other stuff like infrared vision, blinding flares, voice modulator, radio controlled rocket trident!  An interesting build just for a movie, thrilling young Gopher (Eddie Bloomberg, nephew of movie producer, Marla Bloom), and enticing Flash villain, the Trickster, to want to steal it. 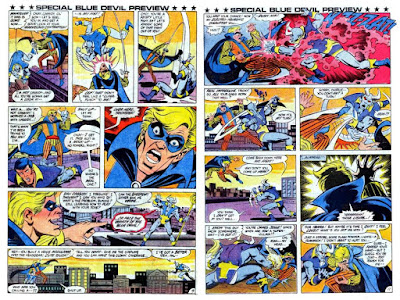 As Marla arrives to deal with the leak of info on the suit, she tries to get Dan to put the suit on to do promotional pictures for the upcoming movie....yet, Dan is too busy to do it, so they get actor Wayne Tarrant to put on the non-powered mock-up suit to do promotional pictures with the lead actress, Sharon Scott (with Sharon having a thing for Dan, yet Wayne having a thing for Sharon).  While taking the pictures on the backlot of Vernor Brothers Studios, rival studio stuntman James Jesse arrives....and breaks in as the Trickster so he can steal the suit. 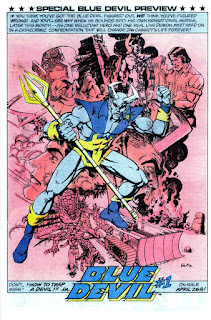 The Trickster makes off with Wayne in the Blue Devil suit, eventually becoming aware that he has the wrong Blue Devil, as Gopher gets Dan to suit up and play the hero.  Blue Devil runs through his various built in abilities (making Trickster want the suit more) before BD beats the Trickster enough so that he takes off, with Dan thinking the suit needs improvement after this unintentional field test.
All this gets readers introduced to the Blue Devil and his cast (including cameraman Norm Paxton), getting you ready for the debut of the Blue Devil magazine, thinking you know how things will go, but, this is Hollywood, so there is always a twist!

How To Trap A Devil 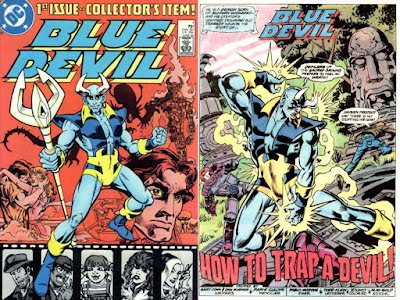 Now, onto Blue Devil #1 (June, 1984) by Gary Cohn, Dan Mishkin, Paris Cullins and Pablo Marcos, with the Blue Devil movie in production at an island location, with Dan in the suit filming a scene of the Blue Devil. 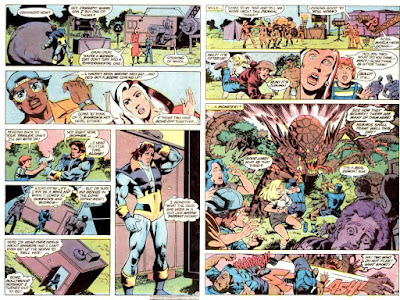 Special effects wizard Dan Cassidy is an impressive figure as Blue Devil, but is insecure, as stars Wayne Tarrant and Sharon Scott are not on the set....having wandered off on the island to some ruins, where Sharon finds the key to unlock a dimensional portal, freeing the demon, Nebiros.  Nebiros was happy to be released, and planned to "thank" Sharon.  Wayne and Sharon flee back to the set, where Nebiros tangles with folks on the set, as Sharon is looking for Dan to protect her.
Marla convinces Dan he can do it using the Blue Devil suit, and Nebiros and Blue Devil tussle for a while, as Norm films the battle.  Nebiros thinks of Blue Devil as one of his demon brothers, as Gopher thinks of Dan as a hero, all while Dan battles to stay alive. 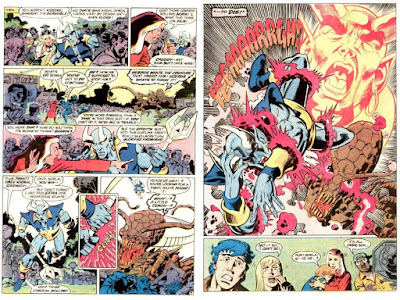 During their battle, Nebiros hits Dan with a blast of mystic energy, nearly killing him (and Nebiros is shocked that Blue Devil returns after getting hit with that blast), as Blue Devil and the crew force Nebiros back through the portal, closing it off.  Marla adapts, planning to use the footage filmed turning Blue Devil from villain to hero of the movie (fighting Nebiros), as Gopher encourages Dan to become a real super-hero.  Dan is considering Gopher's idea....when he discovers the results of Nebiros' mystic blast...that he is now truly Blue Devil, having had his super suit fused with his own body! 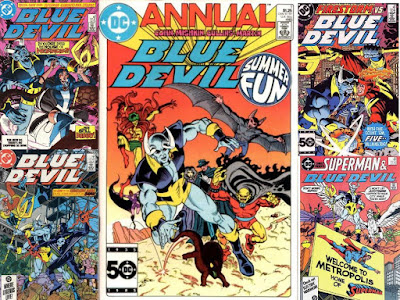 This was the beginning of the adventures of the "weirdness magnet" that was Blue Devil....an odd combination of science and sorcery (with a dash of whimsy) that lasted 31 issues and one Annual (along with a Crisis crossover; meetings with Zatanna, Etrigan, Man-Bat, Madame Xanadu, Phantom Stranger; a Fury of Firestorm crossover and an appearance in DC Comics Presents with Superman).
Blue Devil's creators were: 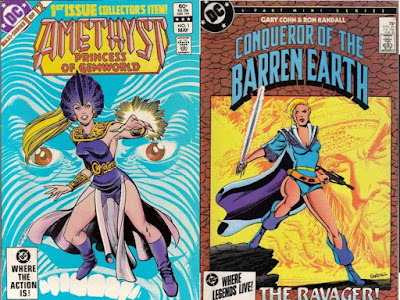 The man who had the initial idea of the Blue Devil, when approached by editor Dave Manak to create something for Steve Ditko, and came up with idea of a hero that combined the suit of Iron Man, tragic story of the Thing, fun of Spider-Man, with Green Goblin look.  Gary also co-created Amethyst Princess of Gemworld, as well as worked on issues of House of Mystery and DC Comics Presents with his Blue Devil co-creator, as well as writing and creating the Barren Earth series as a Warlord back-up (and mini-series).  Gary has recently retired from teaching. 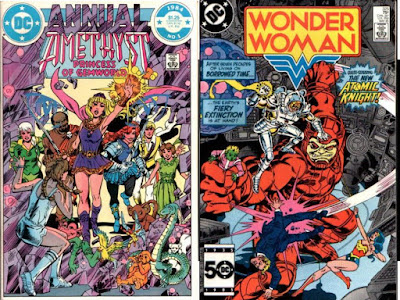 The other half of the writing team for Blue Devil, Dan brought the name to the character (as his wife was from North Carolina), and also co-created Amethyst Princess of Gemworld, as Dan and Gary had worked mostly as a writing team for DC Comics.  Dan did have a run on Wonder Woman as a solo writer at the same time as Blue Devil was going on as a series, and more recently has been keeping busy with the idea that "Kids Read Comics", conventions and thoughts that try to keep comics for kids alive. 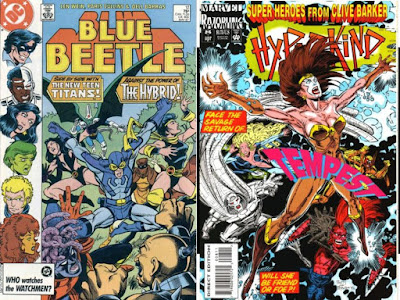 While Gary had come up with the basic costume design, Paris added the belt and dynamic personality to the Blue Devil, as well coming up with the name of the letter column, Circuits & Sorcery.  Having worked on a few issues of Green Lantern and House of Mystery before, Paris was only able to draw the first six issues, later working on the earliest issues of DC's Blue Beetle and New Gods, and then Clive Barker's Hyperkind for Marvel, and being a publisher for Maximum Overdrive Media.
(Thanks to Dan Johnson for his Pro2Pro interview with Dan and Gary from Twomorrow's Back Issue #21 of March, 2007 for the Blue Devil creation facts).
Continuing with the creation theme, the many other creators of the Super-Blog Team-Up have come up with their own various looks at creators and here is where to find what they have done on the red group of SBTU! 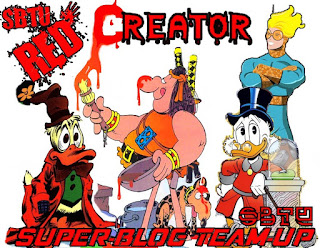 Between The Pages Blog - Scrooge McDuck Tales Woo-Hoo!
Doc Strange - Comic Book's Unsung Heroes!  Steve Gerber!
In My Not So Humble Opinion - Kurt Schaffenberger, The Definite Lois Lane Artist Of The Silver Age
JJ - Sergio Argones - It's A Mad, Mad, Mad World
But, wait, there's more!
Some additional work by more SBTU folks, good as gold, as they look at possible other scenarios with a series of "What If" themed work!
Pop Culture Retroama - What If The Sinister Dr. Phibes Had Been Produced! 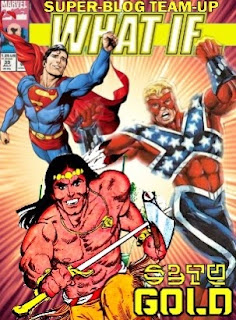 Source Material - What If Captain Confederacy
Comic Reviews By Walt - What If The Ultraverse Had Continued?
Charlton Hero - What If Peter Parker Became Speedball Instead Of Spider-Man?
The Telltale Mind - Arak, Son Of Thunder A Lost Adventure 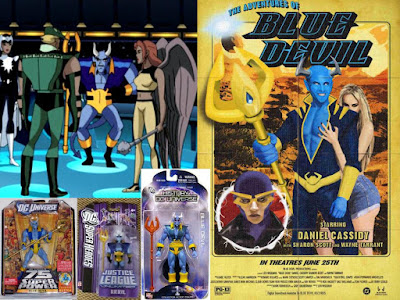 Blue Devil has found new life on screen, appearing in the Justice League Unlimited cartoon, and much more recently, in live action, played by Ian Ziering in the Swamp Thing TV series as well as multiple castings in plastic as action figures, hopefully preparing viewers for the day when a Blue Devil movie won't be a "What If".
Posted by Dave's Not Here Comic Blog at 1:11 AM