Flash Facts: The Early Days of The Trickster 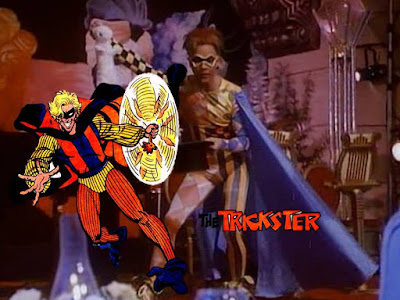 James Jesse was from a family of circus folk, specializing in high wire acrobatics.  Not a bad thing, except James was afraid of heights.  Still, this led him to invent a special pair of shoes that allowed him to walk on air.

Armed with those, as well as a few other gimmicky items, James Jesse took to a life of crime as the Trickster (inspired by the fact his name was the same, but reversed of a famous thief from the old West, Jesse James).  Still, would walking on air be enough to allow him to beat the Flash?

Danger In The Air 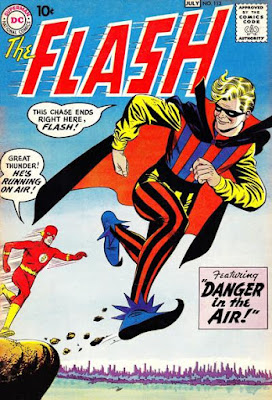 The Trickster performs some incredible robberies, including stealing from an airplane during a flight.  He issues a challenge to the Flash, and escapes him by running on air!

The story relates the history of James Jesse, and Flash, guessing the Trickster may have some circus blood in him, follows that hunch, checking out a local circus in town, where he happens to catch James Jesse practicing his high wire act.  Flash also finds the Trickster's outfit in Jesse's trailer, so, captures the crook, turning him over to the police. 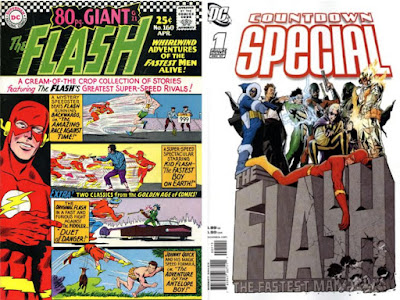 This story made it into Flash Archives, Omnibusi, and Silver Age collections....


The Trickster Strikes Back 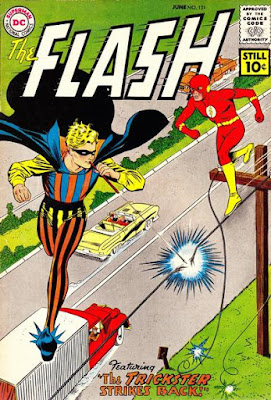 Is the Trickster Flash's father?  Not a revelation seen in Flash #121 (June, 1961) by John Broome, Carmine Infantino and Joe Giella, with a very similar cover to his first appearance, also by Infantino and Giella.

Trickster breaks out of jail, with a new plan for crimes in Central City, to steal from crooks as Flash catches them.  This works for a while, with Flash unable to catch his tricky foe, until he tracks the villain down to his warehouse hideaway.  Even then, Flash first finds a dummy made to look like the Trickster, which explodes!

Flash outruns the explosion, doubling back in time to catch the Trickster and return him to prison. 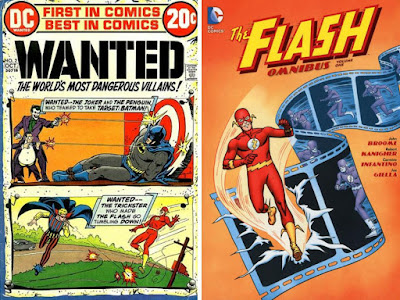 This Trickster tale has been reprinted a few times, like in Wanted, The World's Most Dangerous Villains #2 (September-October, 1972), the third Flash Archive, the first Flash Omnibus and in Flash: The Silver Age Volume 2 tradepaperback. 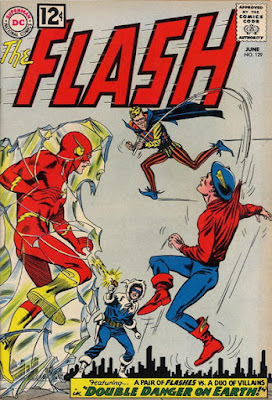 Jay Garrick, the Flash of Earth-2, comes to Earth-1 looking for a meteorite in Arizona that was causing a deadly radiation killing everyone on his home Earth, and goes looking for Earth-1's Flash (Barry Allen) for help.  Barry is at a party, that is being burgled by Captain Cold and the Trickster, who first are working alone, but then decide to team up and try to take off with the cash from the party.  The two Flashes go to find the meteorite, then stop the villainous pair, with Jay going back to his world with the meteorite cure. 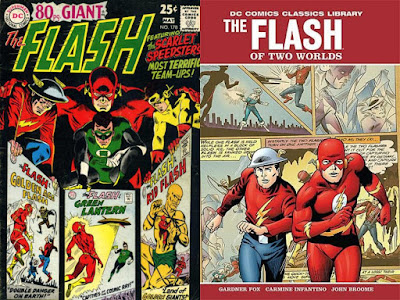 This story was reprinted in Flash #178 (April-May, 1968), the first Crisis On Multiple Earths The Team Ups tradepaperback of 2006, in the Flash of Two Worlds hardcover of 2009, as well as  being one of many tales in the first Flash Omnibus.

Who Doomed The Flash? 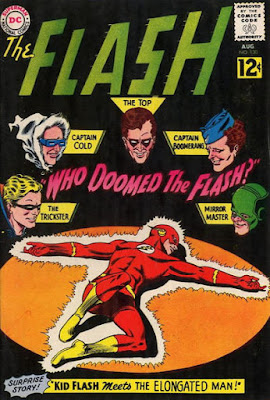 To be honest, James Jesse was barely in this issue.  Flash seems to see many of his captured foes out on the loose and checks the prison near Central City, with James being one of the inmates there.  It was the Mirror Master, controlling the mind of attorney Paul Barrett that makes it seem like Flash's foes are out on the loose.   Flash, stops the plan, and Trickster's appearance here is only a slight one.  Still, this is an important issue, establishing that Flash's foes know each other, and later, when a Rogue's Gallery forms, Trickster will be represented. 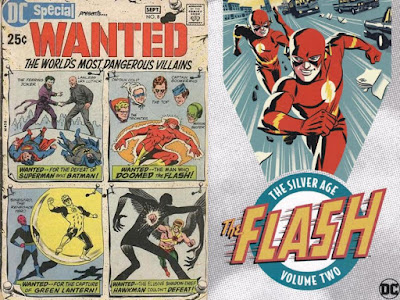 This issue was reprinted in DC Special #8 (July-September, 1970), the fourth Flash Archive, DC Comics Presents: The Flash of 2011, the very heavy first Flash Omnibus, and the second volume of Flash: The Silver Age tradepaperback.


Perilous Pursuit Of The Trickster 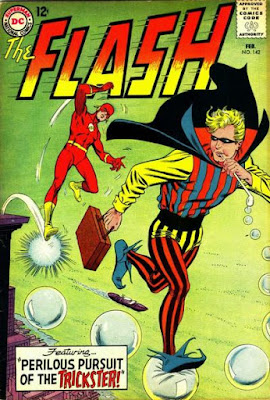 This time around, Trickster steals from a child....a toy detective set that he then uses in his next crimes.  When Flash arrives to stop him from taking the money, the Trickster makes Flash look foolish, which so delights the Trickster, that he leaves the money behind, taking joy in embarrassing the Flash.  Flash next confronts the Trickster while the villain is stealing a diamond, but Flash was ready this time.  He had positioned a wire into the air previously, and uses it to reach the Trickster in the air, then handcuffs the Trickster using the handcuffs from the toy detective kit. 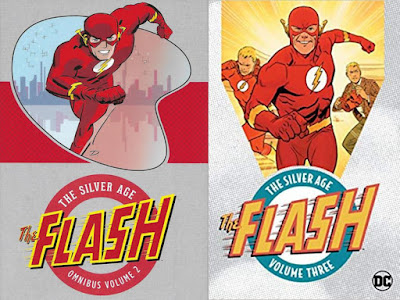 This story was reprinted in the sixth Flash Archive, as well as in the second Flash Omnibus and in the third Flash: The Silver Age tradepaperback with a wealth of other classic speedster stories of the Flash. 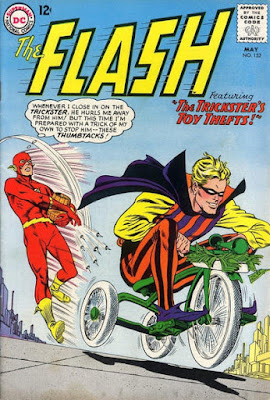 Flash #152 (May, 1965) features a Trickster story by Gardner Fox, Carmine Infantino and Murphy Anderson, with Infantino and Anderson doing yet another slight variation on the classic Trickster cover pose.

Trickster starts his crime spree by stealing a hobby horse that Iris West was giving to her niece, Inez.  Flying off on the horse, Flash chases after him as Trickster uses it to rob a dirigible, but has to let the thief go to save the passengers of the vehicle who were in danger.  Trickster has two more toys he tries to use against the Flash....a surfboard and a tricycle.  Flash again saves innocent people while Trickster uses the surfboard in a crime, but, is able to counter the tricks of the tricycle, capturing the Trickster! 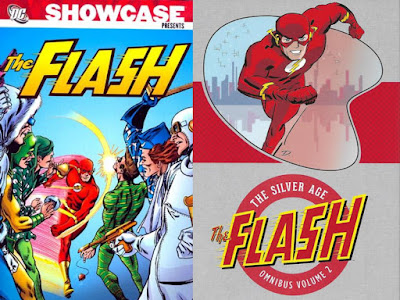 Flash reprints of this tale only come in black and white in the Showcase Presents: The Flash Volume 3, and in the second Flash Omnibus (but at least that's in color). 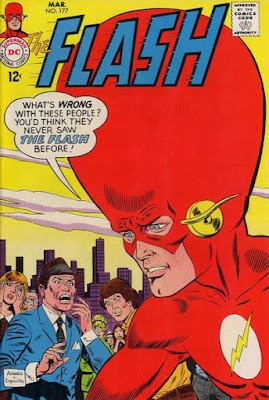 Barry Allen uses his detective skills to solve a locked room mystery, and brags about it quite a bit.  Then, when he switches to the Flash, his head really begins to swell...all thanks to the Trickster.  The Trickster exposed Flash to weapon that causes Flash's head to expand (giving Flash headaches that slow down his use of his power), giving Trickster a chance to try to pop Flash's head.  Knocking Flash unconscious, Trickster brings him back to his headquarters, where Flash finds the bird that Trickster originally experimented on (and cured with a dose of special radiation).  Enough residual radiation remained on the bird to decrease Barry's headache, allowing him stop the Trickster, then further analyze the bird, to enable him to cure his condition. 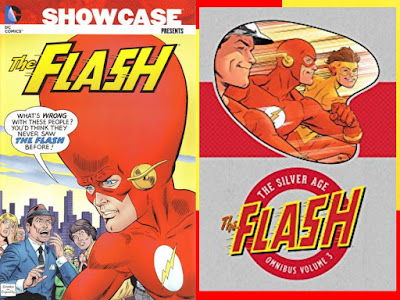 This tale is the front cover for the fourth Showcase Presents: The Flash (which reprints the story in black and white), and in the third Flash Omnibus, which does present this tale in a color reprint for your enjoyment! 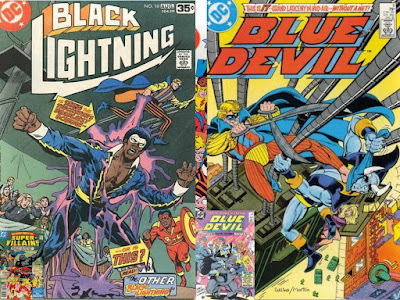 Trickster appeared in a few more Flash issues, meeting villains like Captain Boomerang, Gorilla Grodd, the Top and Pied Piper, joining both the Flash's Rogue's Gallery, as well as the Secret Society of Super-Villains, then went of to fight Black Lightning and Blue Devil as well....getting to switch sides working with Blue Devil, almost become a hero over time, fighting the villain Bolt....quite the trick for the Trickster!
Posted by Dave's Not Here Comic Blog at 3:33 AM